My brother and I have purchased 1037-1039 East Tabor Street and are completely redoing it.  We would like to know when the structure was built, who built it, and any information you might have about people who lived in it over the years. ~ Louis M., Indianapolis

The property that your brother and you are renovating is located in a residential area known by the legal description of Metzger’s Garfield Park Addition.  The building sites were laid out in 1905 by Albert E. Metzger (1865-1931).  At the time, Metzger was a relatively young businessman who sold real estate and insurance, made mortgage loans, and booked steamship passages.  As a young man, Metzger resided at 1508 Broadway Street in what is now the Old Northside Historic District.  His former residence still exists today.

Later in life, Metzger helped found the German-American Trust Company, which eventually became American Fletcher National Bank (AFNB).  He built the Hotel Lincoln at West Washington Street and Kentucky Avenue and the Guaranty Building on Monument Circle.  He was also one of the founders of Citizens Gas, now Citizens Energy.  At the time of his death, Metzger lived in a large home at 3120 North Meridian Street, which no longer exists today. 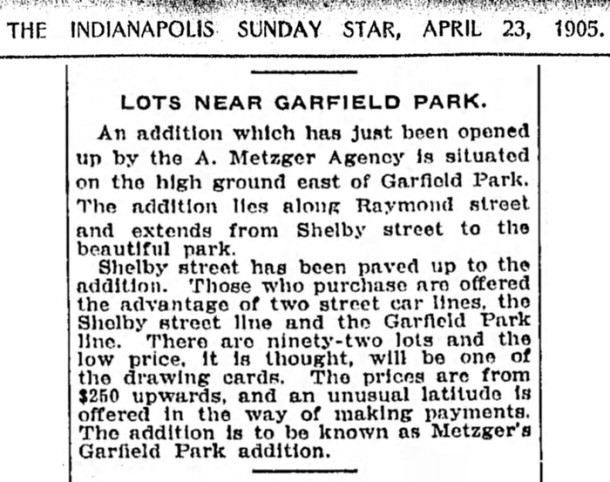 Advertisements for Metzger’s new housing addition touted the high ground and the proximity to the city park, as well as the paved streets and public transit options. 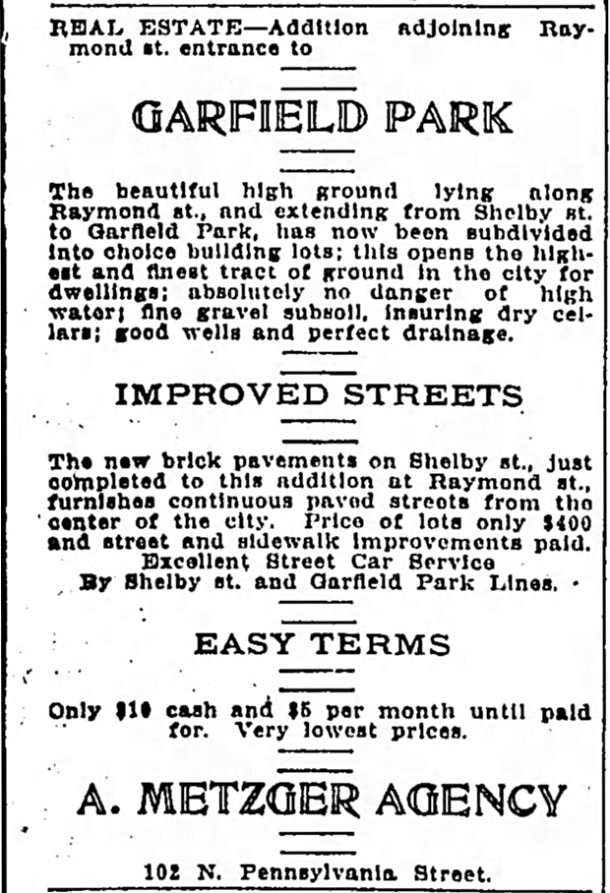 At the time of the 1908 Baist Atlas map, only a few of the building lots east of Garfield Park had been improved. Lot 32 was still vacant ground at the time the 1908 map was drawn. 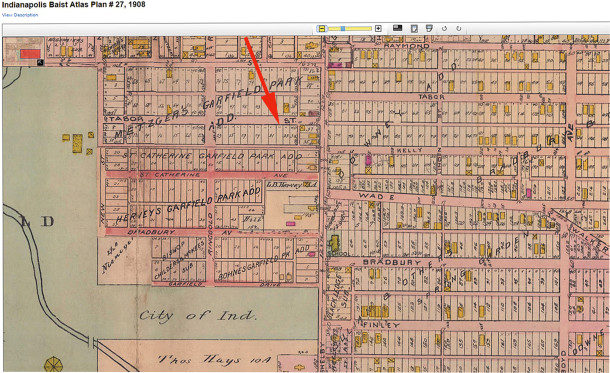 It is not very common for a two-family home to be occupied by the same people for very long.  Most “doubles” (the preferred Indianapolis terminology for side-by-side, two-family residences) are rental properties. Tenants often come and go.  In the case of 1037-1039 East Tabor Street, however, various members of the same extended family lived in one side of the property or the other, or both sides of the property, for nearly six decades.

In 1903, John and Sarah Green moved their family to Indianapolis from New Salem, Indiana, southeast of Rushville.  Upon their arrival in the Hoosier capitol, the Greens resided in a rental just east of Fountain Square at 1518 Woodlawn Avenue.  John Green (1844-1905) passed away only two years after the family relocated to Indianapolis.  Eight years later, the widowed Sarah Smith Green (1850-1933), and her son, Clyde Edward Green (1885-1961), purchased Lot #32 in Metzger’s Garfield Park Addition.  The completed structure was later assigned the mailing addresses of 1037 and 1039 East Tabor Street.

Following his graduation from Manual Training High School in 1904, Clyde Green went to work as a clerk in the advertising department at Eli Lilly and Company.  By 1909, he was listed in the city directory as a supervisor. From 1910 to 1915, he worked for the Mooney-Mueller Drug Company, wholesale druggists, at 101 S. Meridian Street.

While a high school student, Clyde had learned to play several instruments.  As a young adult, he organized a band that played at various venues around town.

About 1915, Clyde Green experienced a religious conversion and a calling to become a minister.  He was ordained by the Church of the Nazarene in 1917 in the Wells County town of Bluffton, Indiana.  After two years there, he became pastor of a church in Huntington, Indiana, where he oversaw the construction of a new building.  During this time period, the family retained ownership of the double at 1037-1039 East Tabor Street. They kept one side for themselves and rented out the other side for a few years.  An article in The Rushville Republican attested to Green’s conscience and his desire to atone for wrongdoings in the past. 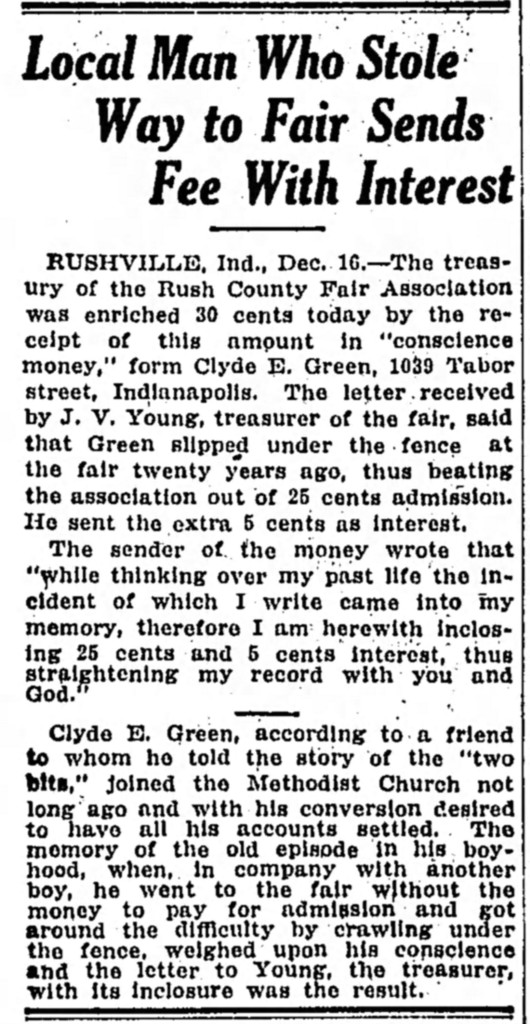 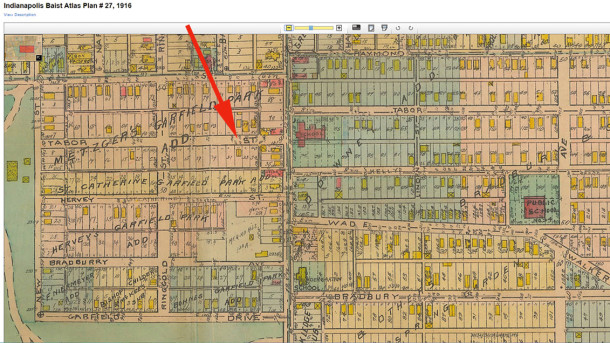 Prior to her death in 1933, Sarah Green deeded her portion of the property’s ownership to son Clyde Green.   Her funeral was held just a few hundred feet east of her home, in a funeral parlor on the northwest corner of Shelby and Tabor Streets. 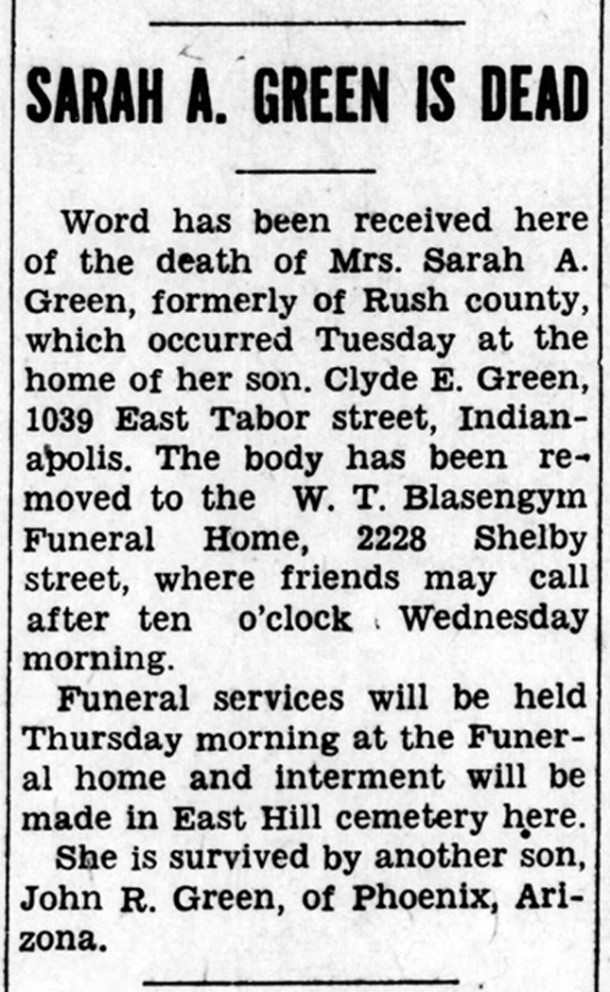 1933 obit in The Rushville Republican for Sarah Green

The double on Tabor Street was a constant in the extended family’s lives from 1913 to 1969. Children were born, married, and had children of their own while living at 1037-1039 E. Tabor or in properties nearby.

The 1941 Baist Atlas map 27 illustrated how the neighborhood had grown, not only with residences but with schools, churches, and commercial properties.  St. Catherine of Siena Catholic Church and School was less than a block away, and IPS Eleanor Skillen School 34 was just three blocks away.  With its many amenities, Garfield Park alone was reason enough to live there. 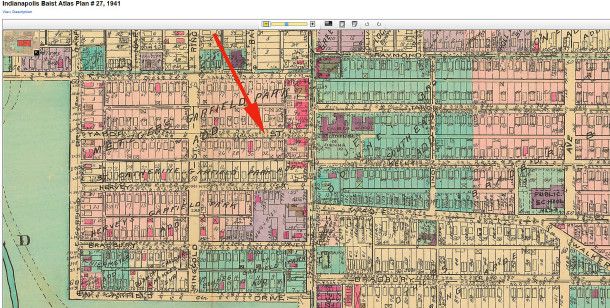 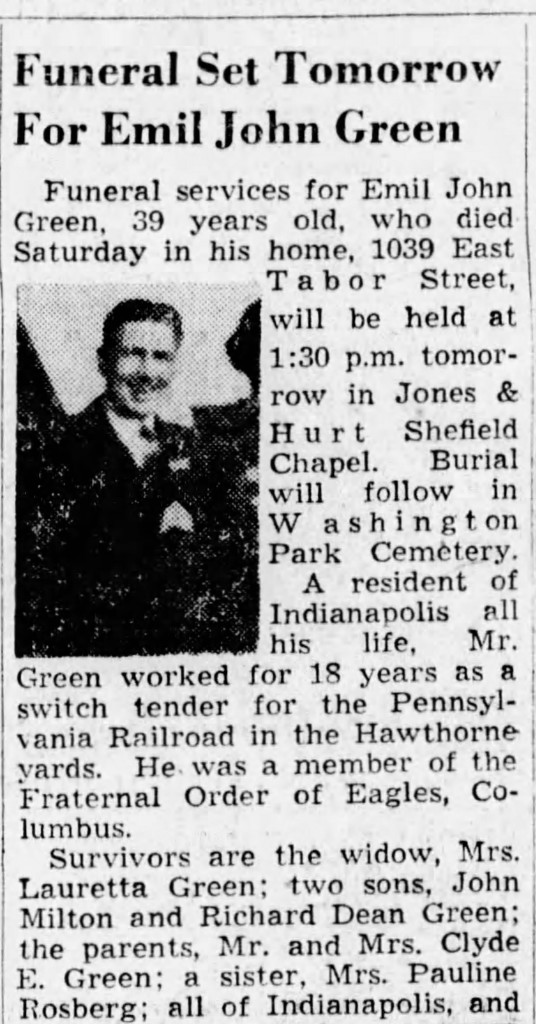 1960 Indianapolis Star announcement of the marriage of John Milton Green 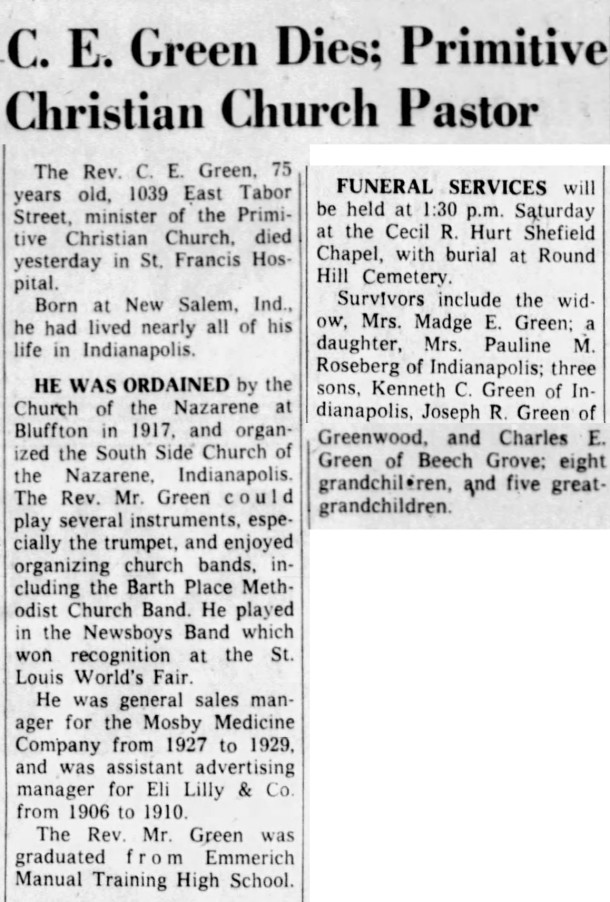 Clyde Green’s widow, Madge, continued to own the home until 1969, at which time it was purchased by John Donald Riggin Jr. (1942-1995).  Riggin was a firefighter with the Indianapolis Fire Department for 28 years.  Riggin lived on the west side of the property and rented the other side, first to David and Beverly Stanton and later to Larry W. Nay.

In 1997, the property was transferred to Robert T. Kelsey II.  During the years of his ownership, the garage was listed in the February 8, 2003, issue of The Indianapolis Star as being slated for demolition.  Kelsey owned the property until 2003, when it was quitclaim deeded to his ex-wife, Lucille A. Jakad Kelsey, who sold it two months later to Jack L. Whitaker (1929-2006) and Cynthia S. Whitaker.  Jack Whitaker worked for Hubler Chevrolet for 30 years.

With its recent purchase and ongoing renovations, the property at 1037-1039 East Tabor Street is now entering a new chapter in its 102-year life.  HistoricIndianapolis.com commends your brother and you for making an investment in an older neighborhood. 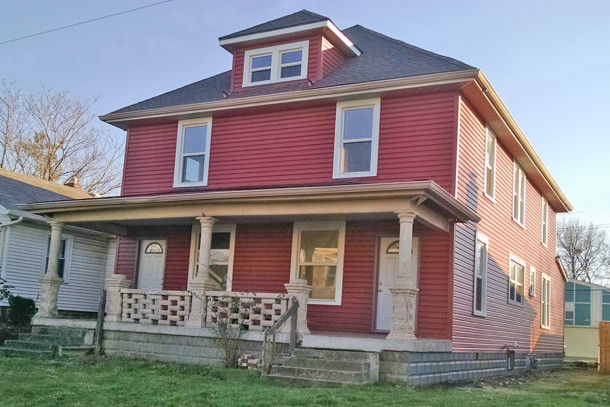