Whenever I park on Michigan Street near the Athenaeum, I always notice the whitewashed building at 429 East Michigan Street. It seems older than the buildings around it, for some reason. It’s just very different, especially those steps and that eagle above the front door. It seems like one of the few older homes still left in the Mile Square. I’d love to know more about this building! ~ Matt B., Indianapolis

The next property east of the Athenaeum on which a building is still standing today is 429-431 East Michigan Street.  At one time, there were two additional single-family homes in the 400 block, between the Athenaeum and the subject property, but those formerly improved properties are gone.  The land where they once stood is now part of the parking lot for the Athenaeum. 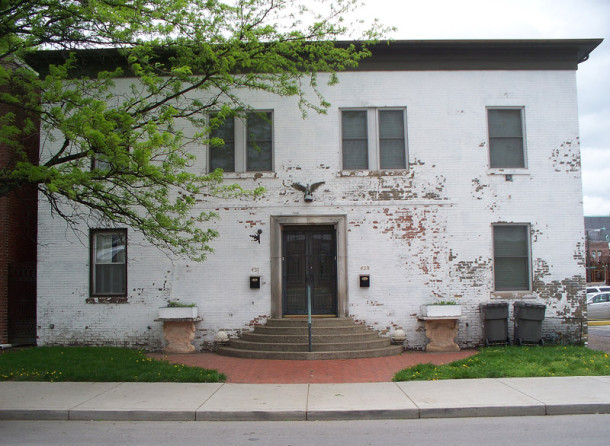 The white-painted brick building at 429-431 E. Michigan Street is the next property immediately east of the Athenaeum (photo by Sharon Butsch Freeland)

The two-family dwelling that is the subject of this piece is within the purview of the Riley Area Development Corp. (RADC).  The property is just barely outside the official boundaries of the Lockerbie Square Historic District, which end at East Street.

Although there is only one front door for entry into the building, there are two units inside.  After viewing window and door placements on all four sides of the structure, it’s obvious that it was built as a two-family home.  The window locations and floor plans on either half of the building are essentially mirror images of one another. 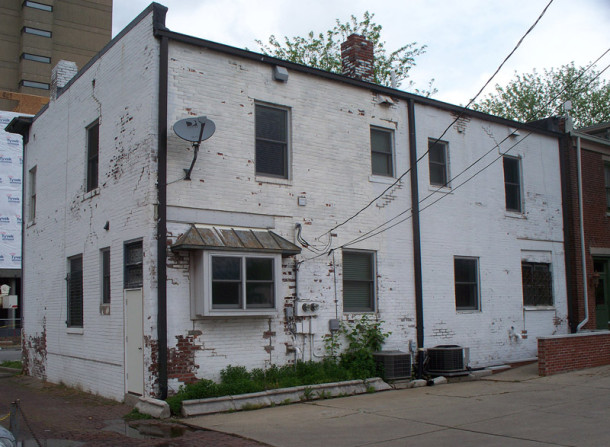 Although doors and windows have been modified over the years, it’s obvious that the two units basically mirror one another (photo by Sharon Butsch Freeland)

Because records from the time frame in which this building was erected are not readily available, I can only estimate its construction as being about 100 years ago.  At the time of the 1887 Sanborn map, the current two-family residence did not appear yet, so it had to have been built after 1887.  The spot on which the current building stands is actually the rear portion of Stewart Sub Lot #1.  The land under the subject property was originally part of the same parcel as the historic Harlan-Hoffman House at 440 N. East Street.

In 1887, there was a building at the back of the Harlan-Hoffman House’s lot, adjacent to the north-south alley now called Cleveland Street.  Most likely, that structure was a carriage house or a barn.  At some point, Lot #1 was divided into separate parcels, which are now owned by different people. Note also on the 1887 map that the land on which the Athenaeum was built still had single-family homes on it.

By the time of the 1916 Baist map, the two-family residence at 429-431 East Michigan that still stands today had been built, so it had to have been built before 1916.  That puts the time frame for construction of the residence as between 1887 and 1916.  However, information on the Harlan-Hoffman House provides a clue to the possible year of construction.  There was an addition to 440 N. East Street in 1910, so my guess is that the subject property was built about the same time.  You can read about the addition to the Harlan-Hoffman House on the Max Kade German American Center website here.

I spoke with the current owner of the property, who also owns a business in the nearby Cottage Home Neighborhood.  He has owned 429-431 East Michigan Street since 2004.  He does not know the year in which the residence was built.  He bought the property from the estate of an elderly woman who had owned it for many years.  Betsy Smith Toy Hall, was president of the Rex Insurance Company, which was founded by her father in 1912.  A longtime resident of Woodruff Place, Mrs. Hall was president of the Woodruff Place Civic League and helped save the fountains, statuary, and street lamps.  She donated several vintage homes to Indiana Landmarks for restoration.  She was a member of the Caroline Scott Harrison Chapter of Daughters of the American Revolution and was twice named a Kentucky Colonel.

Betsy Hall was a member of the Athenaeum Turners Club, and her frequent visits to the Athenaeum may have led to her investment in 429-431 E. Michigan Street.  Betsy is probably the person who made some of the modifications to the original building that remain today, including the removal of a covered front porch and the installation of the single front door, replacement windows, rounded concrete steps, and the ornamental eagle atop the entrance.