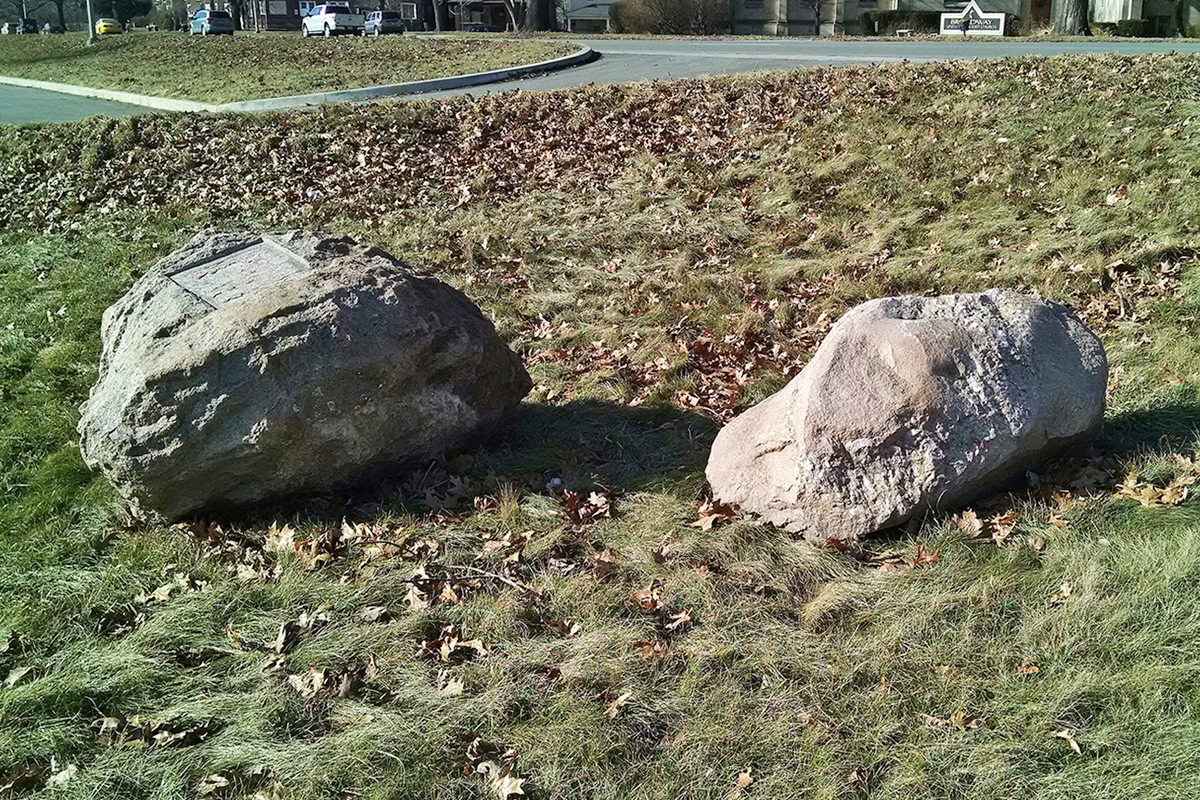 There once were two large boulders on the shore of Fall Creek, just west of College Avenue.  Bronze plaques were embedded in the boulders, commemorating two drowning victims.  Was there once a swimming beach at this location? ~ Jay H., Indianapolis

After checking old maps, early city directories, and historical newspaper archives, I could find no indication that a swimming beach ever existed on Fall Creek near College Avenue.  As that location is only a couple of miles from downtown, it was probably not far enough out in the country to have as much appeal as other more remote recreational spots in the county.  Places like  Hammond’s Grove,  Fairview Park,  Broad Ripple,  Huffman’s Grove, and  Ravenswood were well-documented destinations that offered bathing beaches, boating, camping, and other outdoor activities to early citizens of Indianapolis.

Two small dots can be seen below in a 2014 aerial view (click to enlarge).  For about 75 years, these were the side-by-side locations of the two boulders.  As a result of recent improvements to the IndyParks trail that parallels Fall Creek, however, the boulders have now been moved two blocks east of their original placement. 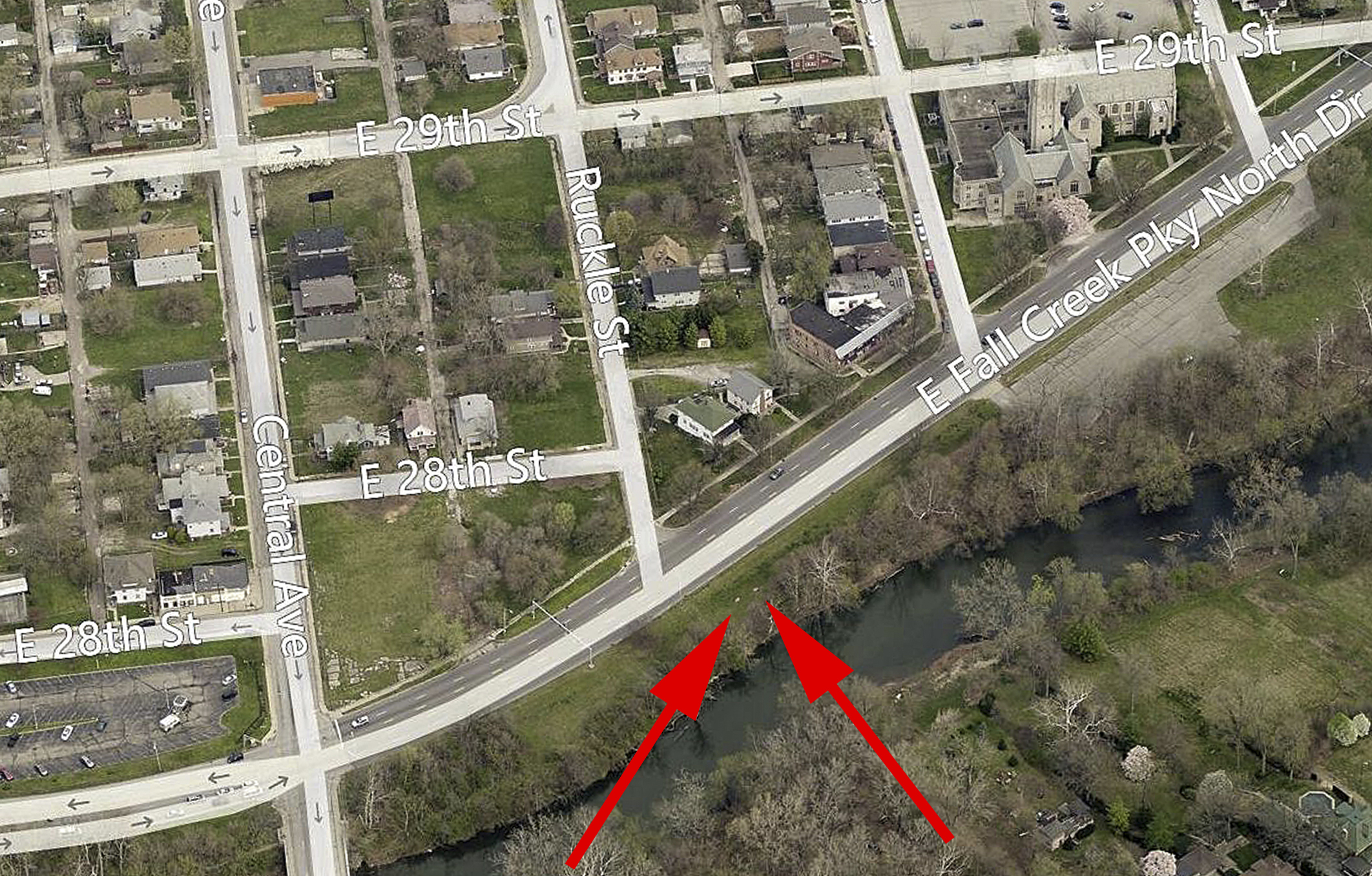 Whether or not there was ever a beach alongside Fall Creek near College Avenue, the boulders and bronze plaques referenced were not the result of a summertime swimming accident, as one might logically assume.  The markers were placed near the banks of Fall Creek in memory of an event that occurred there in wintertime.  On Saturday, January 11, 1936, three boys from the neighborhoods we now call Mapleton-Fall Creek and Historic Meridian Park drowned in Fall Creek after venturing out onto thin ice and falling through it.

Three brothers and their friend, all four of whom attended IPS School 60 and belonged to the same Cub Scout pack at Tabernacle Presbyterian Church, decided to go on a self-guided hike. They were John Buchanan, 11, David Buchanan, 10, Stephen Buchanan, 8, and Charles Prange, 10.  That morning, the three Buchanan boys left their home at 3138 Washington Boulevard on foot, picked up their friend Charles Prange at 3030 North New Jersey Street, and walked east on 30th Street to the near side of the creek.  As they hiked along the west side of the waterway, they discovered that the creek had frozen over.  The boys decided to cross over to the Sutherland Avenue side of Fall Creek on what appeared to be a solid surface.  The ice soon gave way to the weight of the four boys.  Two of the boys made it to the opposite shore, but one went back into the water to save the two who had gone under.  The youngest of the four had been told to stay on the bank by the older boy, and he obeyed.  After all of the other boys disappeared, the remaining boy tried to get help, but no one responded to his cries.  Finally, he walked back home, more than a mile away, to tell his mother.  By the time a rescue team could arrive, more than an hour had elapsed.

The story was covered by all three of the city’s daily newspapers.  Being an evening paper, The Indianapolis News was the first to report the tragedy as it was unfolding on Saturday.

Having more time than The News to gather details before its Sunday morning edition went to press, The Indianapolis Star had a bigger spread the next morning. 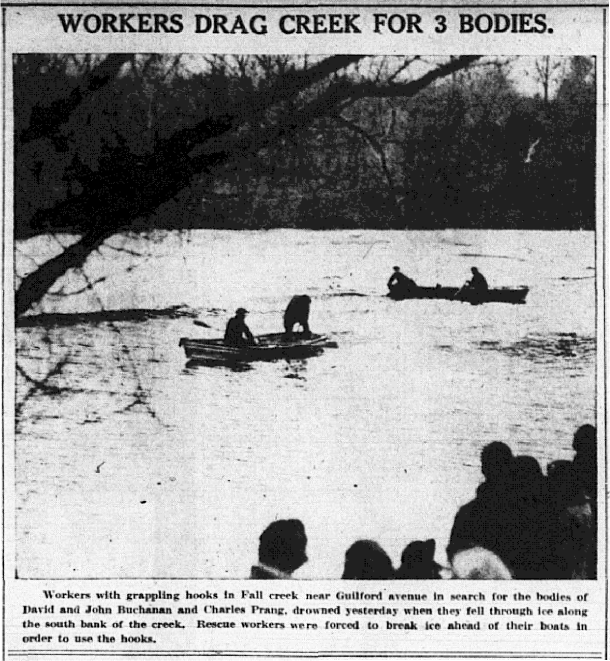 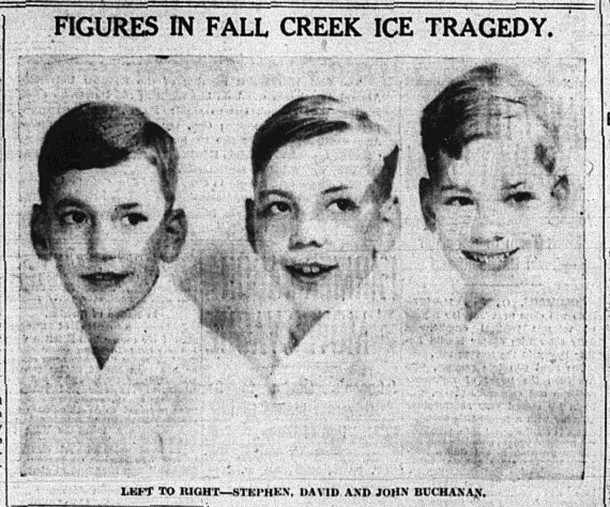 Stephen, David, and John Buchanan were grandsons of the president of Flanner and Buchanan Funeral Centers  (Indianapolis Star scan courtesy of the Indianapolis Public Library) 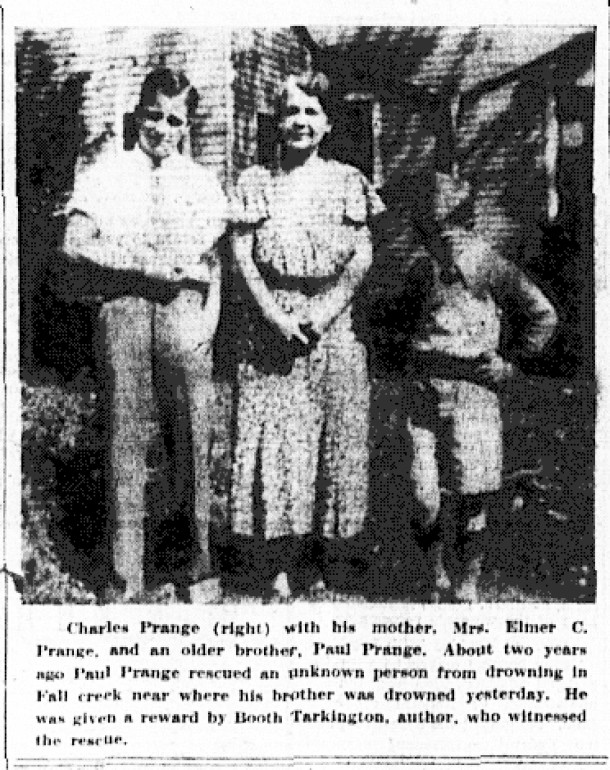 By the time The Indianapolis Times was able to cover the tragedy on the following Monday, the boys’ funerals had been arranged. 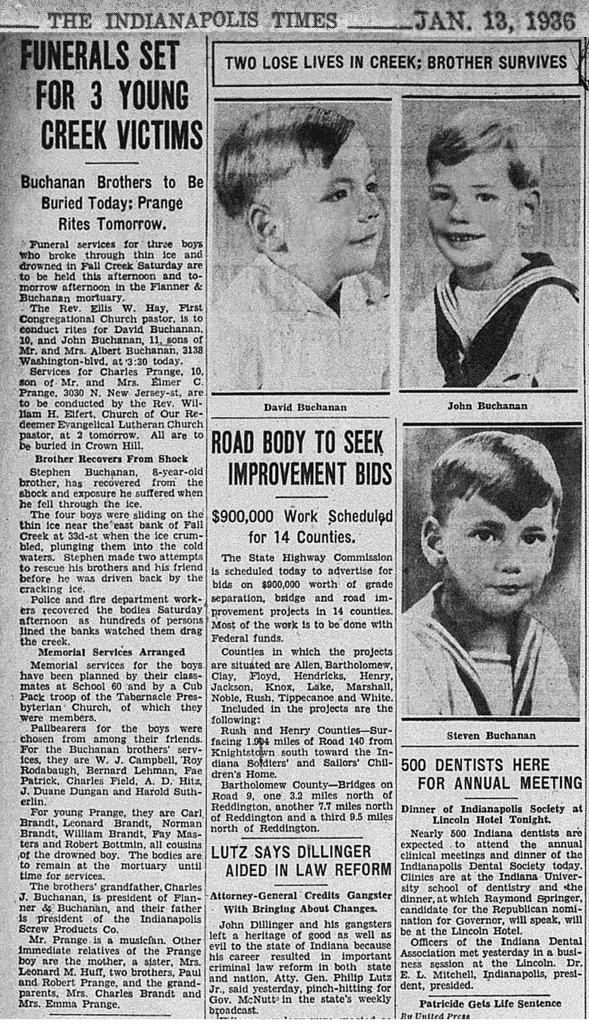 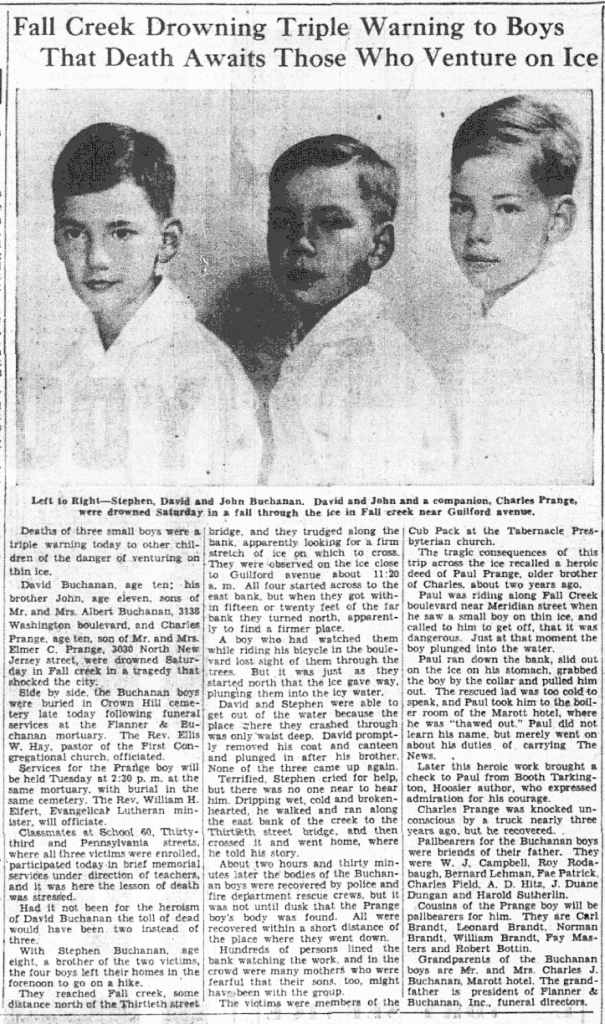 The boulders and the plaques mounted on them were purchased by the Buchanan family.  They were placed in the approximate location that survivor Stephen Buchanan remembered the boys’ hike along the creek had begun.  Unfortunately, I could find no record of the inscriptions that were imprinted on the plaques nor the date on which they were installed.  If the boulders were placed there not long after the tragedy, then they remained in the same location in which they were initially installed for about 75 years.  They were moved only recently when new pavement, new park benches, and new fencing were installed on the trail.  The boulders are now positioned up closer to the street than they are to the creek. 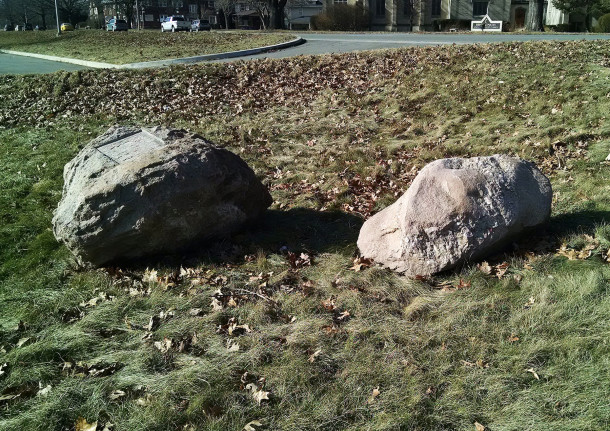 Sadly, the memorial plaques have been stolen from the boulders.  I could find no record of how long ago the plaques disappeared. 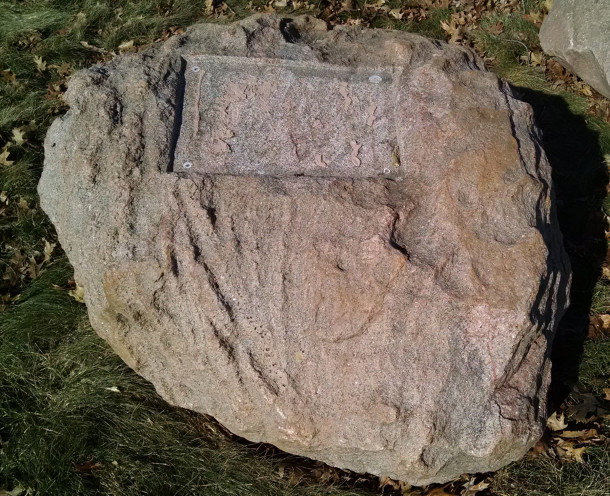 The lone survivor of the tragedy, Stephen Flanner Buchanan, is still living.  He resides in Oakland, California, and will be 88 years old this year.