Can you confirm or debunk that there used to be a cemetery in Broad Ripple where the firehouse now is, on the northwest corner of Westfield and Guilford? I used to have a business in Broad Ripple and lived on Union Chapel Road, and it wasn’t lost on me during my walks in the cemetery that Mustard, Coil, and other Broad Ripple names appear on headstones there.  I had once heard or read that the bodies buried at the cemetery in Broad Ripple were disinterred and moved to the Union Chapel Cemetery, but I haven’t been able to confirm that online.   (A further detail of that story is that the structure just west of the firehouse — now a restaurant — was the cemetery caretaker’s house.)  ~ Regards,  Mark Finch, Indianapolis

The parcel of land in Washington Township that would become the Town of Broad Ripple a decade-and-a-half later was purchased from the federal government by Jesse McKay and Jacob Colip. The land patent was issued by the United States of America on November 13, 1822. 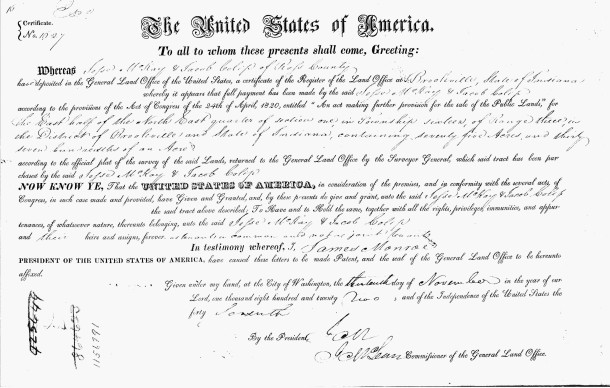 When construction of the Indiana Central Canal began in 1836, recent arrival Jacob Coil envisioned the benefits of settling near the commerce that would likely result from the traffic on the canal.  He also knew that the workers would be needing food, clothes, supplies, and other services while the canal was under construction.  Coil purchased some of McKay’s and Colip’s acreage near a wide section of the White River at which a shallow crossing was evidenced by the water that rippled over the rocks.

On April 20, 1837, Coil laid out 48 building lots west of the river and north of the canal.  He named the new community “Broad Ripple,” which was in reference to the ripples in the water of the nearby shallow river crossing.  On May 17, 1837, just four weeks after Coil laid out his Broad Ripple lots, brothers James A. and Adam R. Nelson plotted 32 lots south of the canal. They named their new settlement “Wellington,” in honor of the Duke of Wellington and his 1815 victory over Napoleon at Waterloo. 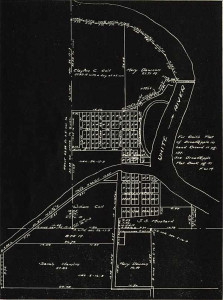 In 1836 — the year before Coil founded Broad Ripple and the Nelsons founded Wellington — another early Washington Township settler named Jacob Whitinger decided to open up his family’s cemetery to the broader community.  As a result of Jacob Whitinger’s decision, the 1822 Whitinger Family Cemetery was renamed Union Chapel Cemetery.  Many members of early Broad Ripple and Wellington families were buried in the Union Chapel Cemetery, and their descendants continue to be buried in UCC today.  The cemetery is located alongside the White River, just east of Keystone Avenue and just north of 80th Street.  Union Chapel Cemetery was the subject of a recent Historic Indianapolis article, which you can read here.

In 1851, less than a decade-and-a-half after the towns of Broad Ripple and Wellington were founded, as well as when Union Chapel Cemetery began burying the deceased residents of those settlements, one of the first churches in the area was built on the northwest corner of Hancock and Morgan Streets. That intersection today is the corner of East Westfield Boulevard and Guilford Avenue. The land for the church was donated by Jacob Coil, Jr., the son of Broad Ripple’s founder, who by mid-century had acquired property south of the canal and west of the Nelsons’ original Wellington lots. Money was raised for the materials to build the church by selling subscriptions. Local carpenters volunteered to build the structure. Over the years, the facility was used by a number of different Protestant denominations.  At times, the building also served as a community house. 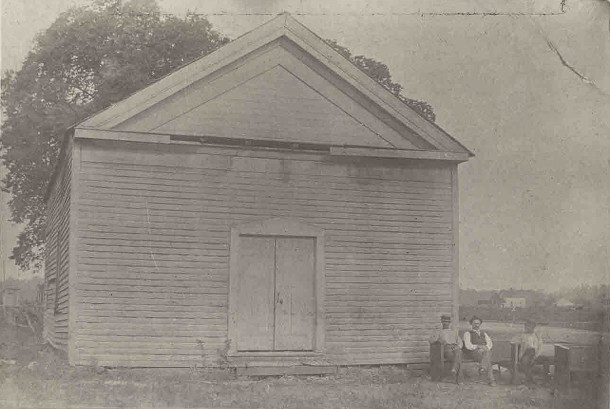 The 1898 Sanborn map shows a Volunteer Fire Department on the corner of East 63rd Street and Bellefontaine Avenue (now E. Westfield Boulevard and Guilford Avenue), as well as a wide drive between the building and the canal.  No cemetery is noted on the map. 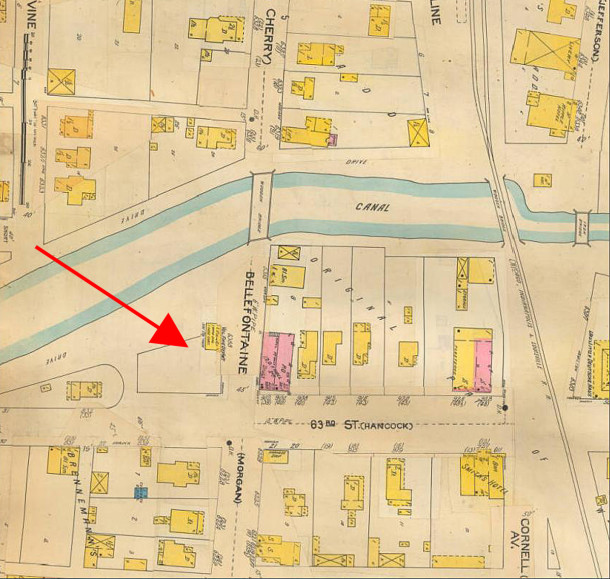 In 1922, the same year that the Town of Broad Ripple was annexed by the City of Indianapolis, Indianapolis Fire Department Station 32 was built on the northwest corner of Westfield and Guilford.  Often referred to by locals as the Broad Ripple Firehouse, it is the oldest IFD station still in operation today.  It was listed on the National Register of Historic Places in 2011. 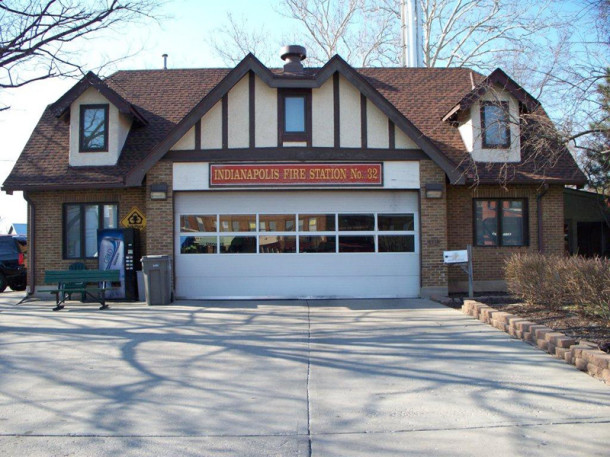 IFD Station 32, aka the Broad Ripple Firehouse, was built on the northwest corner of E. Westfield and Guilford Ave in 1922  (2013 photo by Sharon Butsch Freeland)

Failing to find any documentation of a cemetery having been on this site, I turned to several persons who are knowledgeable about Broad Ripple history.  They included Alan Hague, publisher of The Broad Ripple Gazette;  Christine Carlson, chair of the Committee for Historic Broad Ripple;  and Connie Zeigler of C.Resources Inc., the historian who prepared the application that placed the Broad Ripple Firehouse on the National Register of Historic Places.  None of the them had any knowledge of a cemetery at this location.

In addition, I contacted Dean Walker, whose family has owned the properties immediately west of IFD Station 32 for many years, as well as Tim Harmon, co-owner of Tim & Julie’s Another Fine Mess and a former occupant of the ramshackle structure that once stood to the west of the firehouse.  According to both Dean and Tim, that small frame building had no foundation, no plumbing, no wiring, no running water, and no insulation until the 1980s.  It had reportedly been moved to the lot west of the firehouse from another lot in Broad Ripple.  Following Tim’s having resided there in the 1980s, the building housed Bazbeaux Pizza for the restaurant’s first 17 years of operation. After the establishment moved across the street in 2003, the old structure was demolished.  The “About” page on the Bazbeaux website is the only mention I can find anywhere of the building’s having once been the gravedigger’s home for the town cemetery.  My e-mail to Bazbeaux, asking for the source of this information, remains unanswered.

Besides not appearing on any map I was able to view, neither a cemetery nor a gravedigger is mentioned in any of the recorded minutes of the Town of Broad Ripple.  The notes taken at the town meetings were very detailed about any expenditures the town government paid for services and supplies.  Those records are available in the Indiana State Archives and cover the years from 1894 to 1922.  If no expenses were ever incurred for maintaining a town cemetery, then it doesn’t really follow that there would have been a gravedigger for a town cemetery. If there was a gravedigger who once lived in Broad Ripple, he must have worked at a cemetery located elsewhere.

As far back as 1836, which was a year before the towns of Broad Ripple and Wellington were founded, area residents were being buried in the Union Chapel Cemetery, about a mile-and-a-half away.  From the mid-nineteenth century to the present day, the piece of land on the corner of Westfield and Guilford has been used for other purposes, namely a church, a community meeting house, a volunteer fire department, and a city-operated fire station.  There do not appear to be any records indicating the maintenance of a cemetery or the reinterment of persons at other cemeteries.  Due to the absence of any evidence to document the existence of a cemetery on the northwest corner of Westfield and Guilford, I think the claim that there was one is questionable.

Nonetheless, there may be a possibility that a cemetery existed on the property, even if only briefly. If any HI readers have additional information on this subject, please leave a comment below.