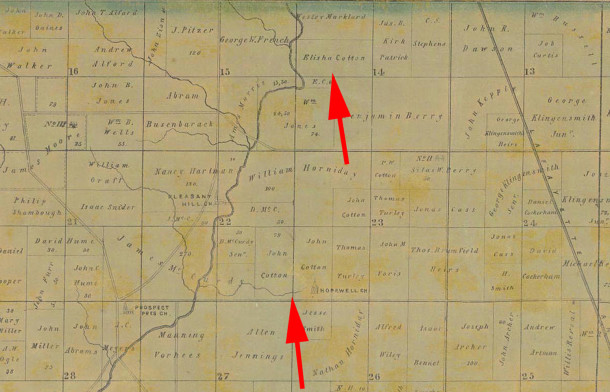 Elisha and Lucinda Cotton appeared on the 1840, 1850, and 1860 Census enumerations.  The couple then disappeared from records, so either they moved elsewhere or passed away.  Although I could not locate Elisha and Lucinda Cotton, their son, Francis Marion Cotton, who was born in Pike Township in 1839, appeared in records in later years, first in Missouri and then in Kansas.  The land that had been owned by Elisha Cotton was subsequently owned by Amos Smith and Henry C. Berry.

John and Nancy Cotton remained in Pike Township for the rest of their lives.  In 1848, they began building a home in a location that would eventually be assigned the address of 6360 West 79th Street.  The original portion of the 2-story Italianate home was completed around 1850.  John Cotton died in 1856, after which time his oldest son, Isaac Newton Cotton (1830-1914), assumed ownership of the property. 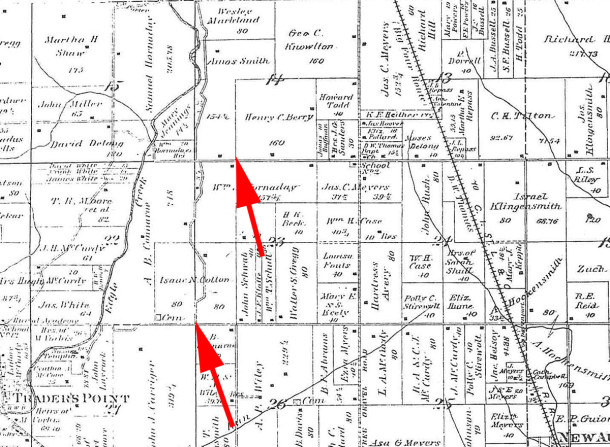 Isaac Cotton attended the Marion County Seminary in 1849 and 1850.  After marrying in 1854 and taking over the family farm in 1856, Isaac taught school during the winter and farmed in the summer, raising pigs and fine-wool sheep.  He also raised honeybees and became president of the Indiana Beekeepers Association.  During the Civil War, he was the local draft enrollment commissioner.  Isaac served as Pike Township Clerk and Pike Township Assessor, and he was elected to two separate terms in the Indiana State Legislature.

Various sources state that Isaac and his wife sold the property to their son Henry in 1890.  However, I am not aware of their having had a son named Henry.  I searched all of the Census records from 1850 to 1940, as well as Marion County marriage records, Indianapolis City Directories, and several local cemeteries’ records.  With the details I collected from these sources, I put together a Cotton family tree.  Isaac had two children by his first wife, Emmaline (Duzan) Cotton, who were named Edessa Jane and Coanthus John;  Isaac had four children by his second wife, Sarah Ellen (Wells) Cotton, who were named Ostorius William, Candolus Allen, Robert Orestes, and Cortes Charles.  I found no son named Henry.  In addition to there being no son named Henry, the sons’ ages in 1890 would have been between 17 and 30 years, which would have been fairly young to afford the purchase of a substantial home on considerable acreage.

However, Isaac Cotton did have a brother named Henry.  Henry Tucker Cotton, M.D. (1833-1909) and his family lived only a few miles away, just off Lafayette Road/US 52 in Boone County.  Henry had a private medical practice in Zionsville.  Henry would have been 57 years old in 1890, and being a professional, would have been more likely to have the means to buy a farm.  I’m thinking the Henry Cotton to whom Isaac and Sarah sold their property in 1890 was Isaac’s brother, not their son.  In any case, whichever relative it was, the property was sold again not long after.  For the next several decades, the house passed through several owners until 1937, when it was purchased by Frederick Noble Ropkey Sr. (1900-1988) and Marjorie Chiles Ropkey (1904-1979).

The Ropkey family owned the property for more than half a century.  The Ropkeys operated the Ropkey Engraving Company, founded in the 1890s as the Indianapolis Engraving Company by Ernest Ropkey (1871-1966).  They also owned the Ropkey Armor Museum, which was originated in Indianapolis by Frederick Noble Ropkey Jr. but is now located in Crawfordsville, Indiana.  In 1997, Frederick Noble Ropkey Jr. and his wife Lani Valdez Ropkey were successful in having the Cotton-Ropkey House placed on the National Register of Historic Places.  The home is one of the few remaining structures in the Indianapolis area that predate the Civil War. 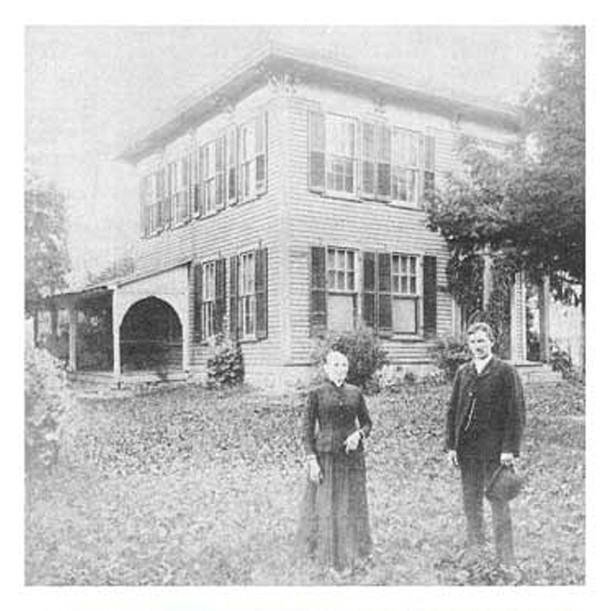 The Ropkey family owned the property from 1937 until selling it to a subsidiary of Kite Realty in 2004.  Upon learning that Kite’s West 79th Street Associates LLC had gotten permission from the City of Indianapolis to level the residence and other buildings on the property, Indiana Landmarks (called Historic Landmarks Foundation at that time) stepped in to stave off demolition and save the landmark.  The new owners agreed to postpone development of the site, while a buyer for the historic structure was found.  The property is available for purchase for $1.  However, the home must be moved to a new lot, and there are covenants that must be observed in its renovation.  Information about the offering can be found on the Indiana Landmarks website here . 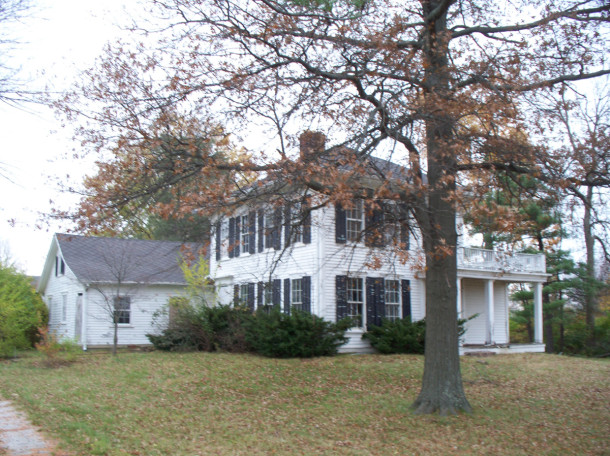 The small cemetery that is located on private property in the West 86th Street Addition is known as the Harmon-Cotton Family Cemetery, as members of both families are buried there.  James B. Harmon (1797-1847) and his wife Philadelphia Dickerson Harmon (1797-1847) were reportedly the first white residents of Pike Township. The Harmons arrived in the area about 1820, and purchased 160 acres of land from the United States of America in 1823.  The Harmons’ land was in Section 14, adjacent to Elisha Cotton’s land.  The resting places of ten persons are known to be in this pioneer cemetery, although there may have been other burials there whose markers did not survive.  The gravestones that remain today overlook Cotton Creek. 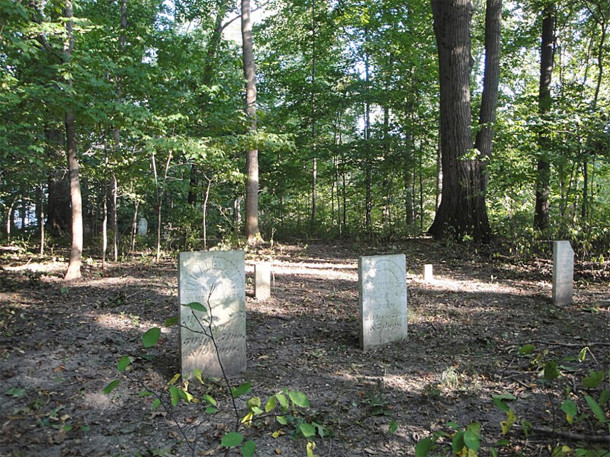 The Harmon-Cotton Cemetery is on private property near Cotton Creek         (photo courtesy of FindAGrave.com)