I live in Pike Township, and I have heard that the old Pike High School was located near 52nd and Lafayette Road.  There is a store that looks as though it’s built onto another old brick building at around 52nd and Lafayette Road.  I was wondering if that older brick could be a part of the first Pike High School, or if the high school was situated further away from this area?  ~ Your friend, Julia Rutland

The building that once stood on the southeast corner of West 52nd Street and Lafayette Road has frequently been mistaken as having been a former location of Pike High School. The three-story brick structure with stone trim was indeed a Pike Township public school, but it was never a high school.  It was an elementary school that housed grades 1-8. 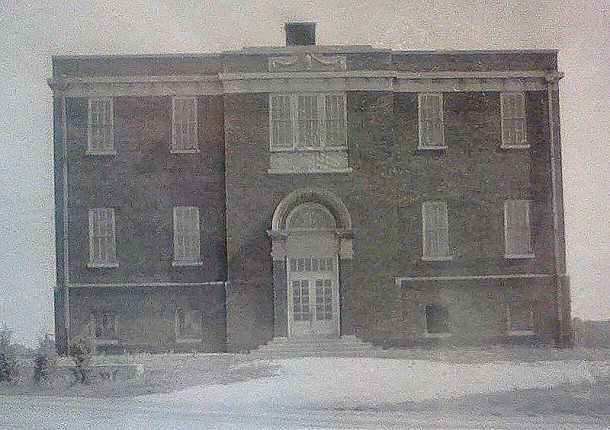 The second Pike Township School No. 11 stood at 5199 Lafayette Road, on the southeast corner of 52nd St. and Lafayette Rd  (photo courtesy of Pike Township Historical Society Archives)      CLICK ON THE PHOTO TO ENLARGE IT

The first school in Pike Township was conducted in a cabin on the west bank of Eagle Creek in 1822, the same year that Marion County was organized.  Other schools popped up in cabins around the township in the 1820s, 1830s, and 1840s, but there was no official school system in place until the township was sufficiently settled to establish one.  In 1853, the township was divided into twelve school districts.  Over the next few decades, a dozen schoolhouses — most of them just one-room or two-room frame structures — sprang up around the township.  In 1889, there were twelve schools operating in Pike Township. 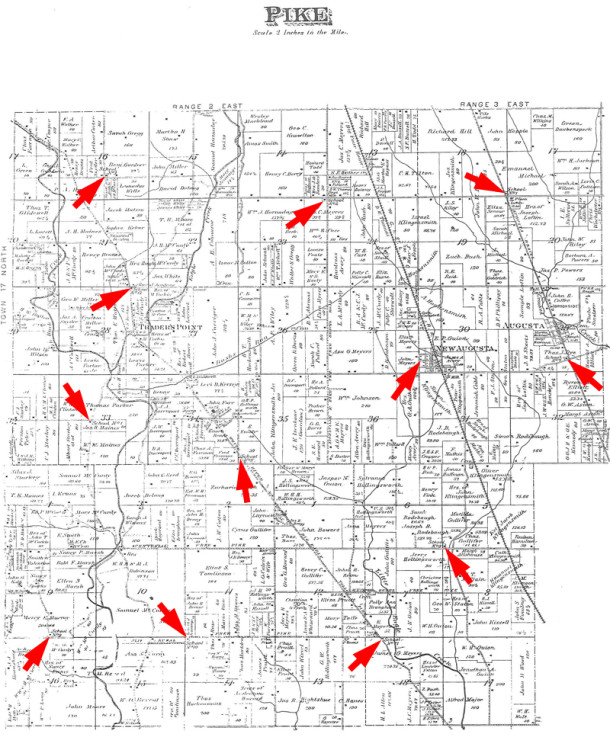 Although each of the Pike Township schools was numbered, most of them also had names associated with them.  The school at 5199 Lafayette Road was officially School No. 11, but it was alternately called “Snacks Crossing School.”  Built in 1913, the three-story brick building replaced a one-room schoolhouse that had stood a few blocks further south for about half-a-century.  The second School No. 11 got its nickname from being at one of the busiest crossroads in Pike Township.  Besides serving as a meeting place for local residents, that corner was also one of the last stops for travelers leaving Indianapolis on US Route 52.  For many years, there was a bus stop at the corner of West 52nd Street and Lafayette Road.  The grocery, gas station, and restaurants at that intersection were the places at which local people got together with neighbors and travelers stocked up on items for their trips north to Lafayette and Chicago.

After 5199 Lafayette Road ceased to be a school, the building housed a variety of different businesses over the years.  Its longest (and final) use was as Earl’s Auction Company & Liquidators, which was established in the mid-1950s by Earl Cornwell, Sr.  The old school building was eventually demolished, when Earl built a new facility just south of it.  A gas station now stands on the corner where the school once stood.  When the 1913- built Pike School No. 11 was being razed, the stone arch over the entry and some of the bricks from the exterior of the building were saved.  They were incorporated into the new Snacks Crossing Elementary School at 56th and Moller Road, which was given its name in honor of that piece of Pike Township history where the name originated.  However, at 5455 West 56th Street, the current school is almost a mile north of the original Snacks Crossing. 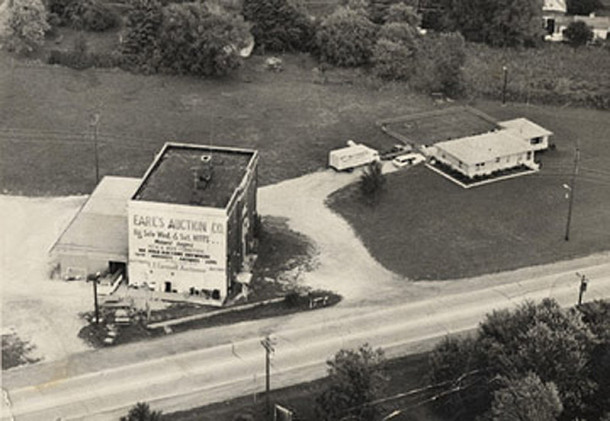 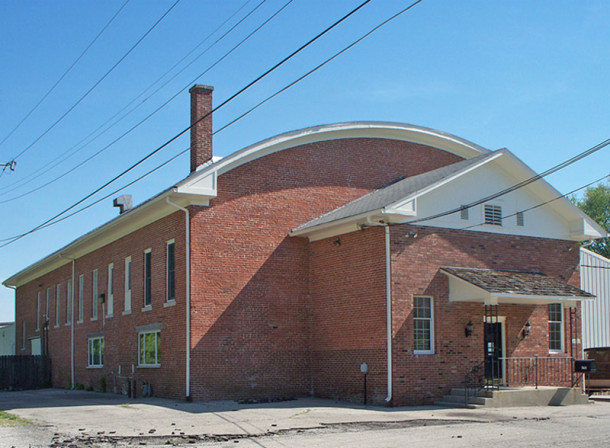 Built sometime prior to 1880, School No. 6 was converted to a gym in 1912, after a new high school was built to the east of it (photo by Sharon Butsch Freeland)

There have been three incarnations of high schools in Pike Township over the past century; however, only two of them were named Pike High School.  The first high school in Pike Township was built in 1909, in School District 6.  It was called New Augusta High School.  It was located on the northwest corner of W. 73rd and Pollard Streets.  The building no longer exists.

In 1909, the first Pike Township building for high school students excusively was erected immediately east of School No. 6  (photo courtesy of Pike Township Historical Society Archives)        CLICK ON THE PHOTO TO ENLARGE IT

The second high school in Pike Township was built in 1938, on the southeast corner of W. 71st Street and Zionsville Road.  It too was called New Augusta High School for the first few years of its existence, but by 1945 was renamed Pike High School.  When yet another new Pike Township high school was constructed in the 1960s, the existing facility then became Lincoln Junior High School and later still, Lincoln Middle School.  That building no longer exists either. 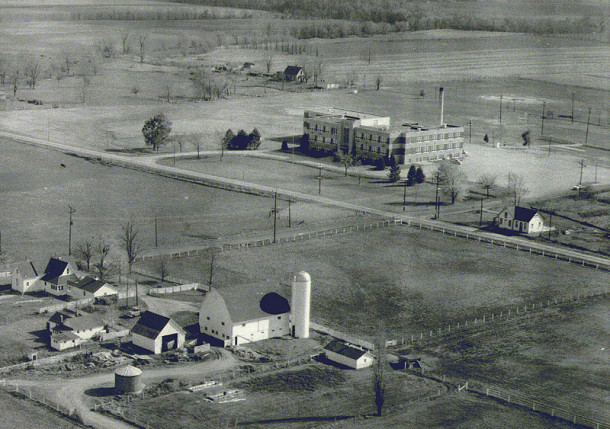 The new high school built in 1938 on the southeast corner of W. 71st St. and Zionsville Rd. was surrounded by farmland  (photo courtesy of Pike Township Historical Society Archives)                  CLICK ON THE PHOTO TO ENLARGE IT

When the building that would become the second of the three high schools in Pike Township first opened, it housed children from first grade through twelfth grade.  The twelve small district schools sprinkled throughout the township were closed, and all students in all grades were sent to the new building.  Gradually, new elementary schools were built throughout Pike Township to replace the old schoolhouses, and the younger students then returned to the schools in the districts where they lived.  Eventually, the new high school accommodated high school students only. 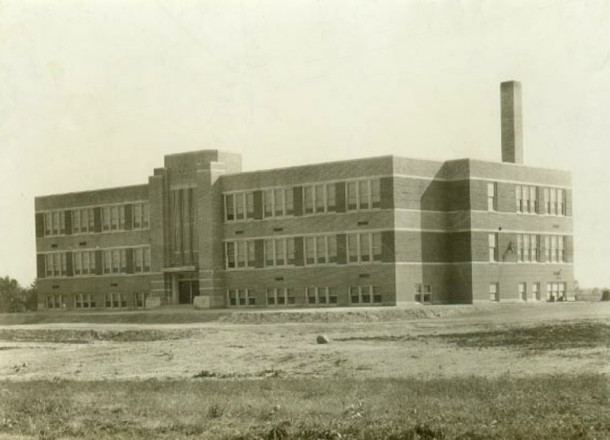 The second building to become a high school in Pike Township was constructed in 1938, near 71st St. and Zionsville Road   (photo courtesy of Pike Township Historical Society Archives) 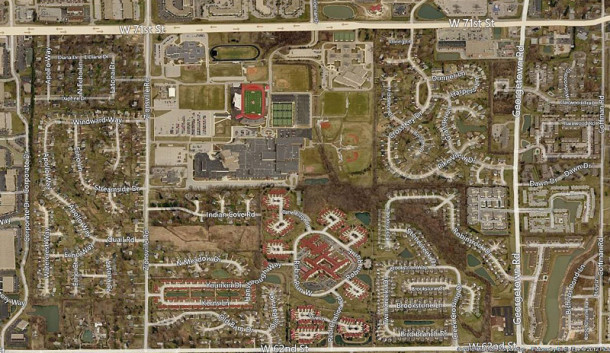 Aerial view of the current Pike High School campus, which has had numerous additions since its original 1965 construction   (map courtesy of bing)

The present Pike High School campus is located on more than two acres at 5401 W. 71st Street.  After multiple expansions, the main building has nearly 96,000 square feet.  The student population is about 3,000 and includes grades 9 through 12.  If you attended Pike High School, Historic Indianapolis would enjoy hearing your memories.  You can leave a comment below. 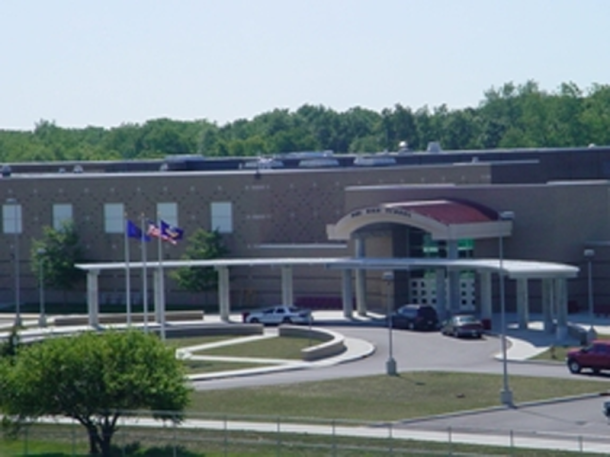