What can you tell me about Mary Stewart Carey’s Haverway Farm?  Do you know how big the farm was originally?  ~ Thanks, Steve P., Indianapolis

For readers who may not be familiar with her name, Mary Stewart Carey (1859-1938) was an Indianapolis civic leader, philanthropist, art patron, business woman, and socialite.  Best known as the founder of the Children’s Museum of Indianapolis, Mary was also a founder of Orchard School, the Indianapolis Garden Club, Flower Mission, and possibly some of the other organizations to which she belonged.

In addition to founding the abovementioned organizations, Mary was a member of the Propylaeum, Dramatic Club, Indianapolis Woman’s Club, Daughters of the American Revolution, Indiana Historical Society, Matinee Musicale, Civic Theater, Art Association of Indiana, Society of Indiana Pioneers, Audubon Society, and the Progressive Club.  She was a member of Meridian Street Methodist Church, during the years that the building was downtown, first at New York and Meridian Streets and later at St. Clair and Meridian Streets.  In 1916, Mary Stewart Carey led the movement for Indiana to adopt a state flag during its centennial year, and she helped select the design for the flag. 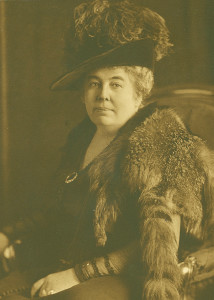 Born in Greensburg, Indiana, in 1859, Mary Stewart Carey’s parents were Daniel Stewart (1824-1892) and Martha Tarkington Stewart (1836-1930).  Booth Tarkington and Mary “Hautie” Tarkington Jameson were Mary Stewart’s first cousins through her mother’s brother, John Stevenson Tarkington.  The Stewarts moved to Indianapolis in 1862, when Mary was three years old.  Although her father’s primary occupation was as a wholesale druggist, he also founded the Stewart Glass Company.  After Mary married John Newman Carey (1855-1926) on May Day in 1879, Carey went to work for his father-in-law.  Upon Daniel Stewart’s death in 1892, John N. Carey became president of the company, and it was renamed the Stewart-Carey Glass Company. 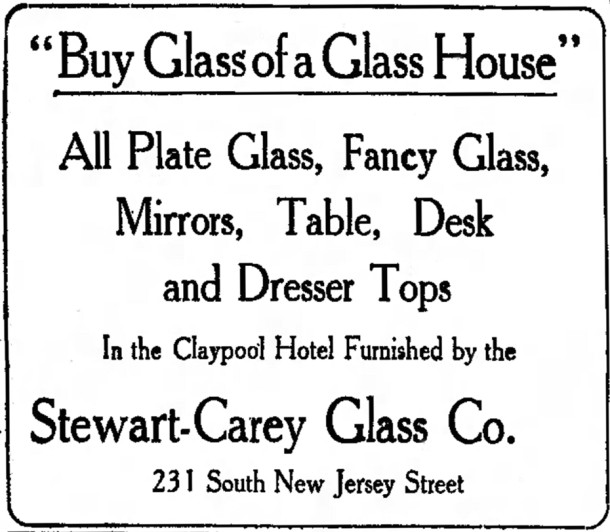 In 1903, John and Mary purchased a large brick house at 1150 North Meridian Street.  For the next two decades, the three-story mansion was the site of many family gatherings, as well as the location of numerous civic and social events.

In 1912, Mary learned of the availability of land known as the Sweetser Farm on the far north side of the county. It was common among successful citizens in those times to acquire land in the country, to have a place to escape from the hustle and bustle of the city.  The property that caught Mary Stewart Carey’s eye had hills and hollows, towering trees, and the meandering Williams Creek running through it.

The story goes that husband John Carey was not completely in favor of the purchase, but the transaction occured nonetheless.  Mary Stewart Carey bought 103.75 acres of land in Washington Township, west of Spring Mill Road on what is today West 86th Street.  As a play on words for her determination to own the farm, the country getaway came to be known as “Haverway.”

During the initial years that the Careys owned Haverway, it was primarily used as a place to which the family could go to relax.  As the years went by, Mary planted an apple orchard and began to raise Jersey cattle.  She also raised chickens and peacocks at their rural retreat. 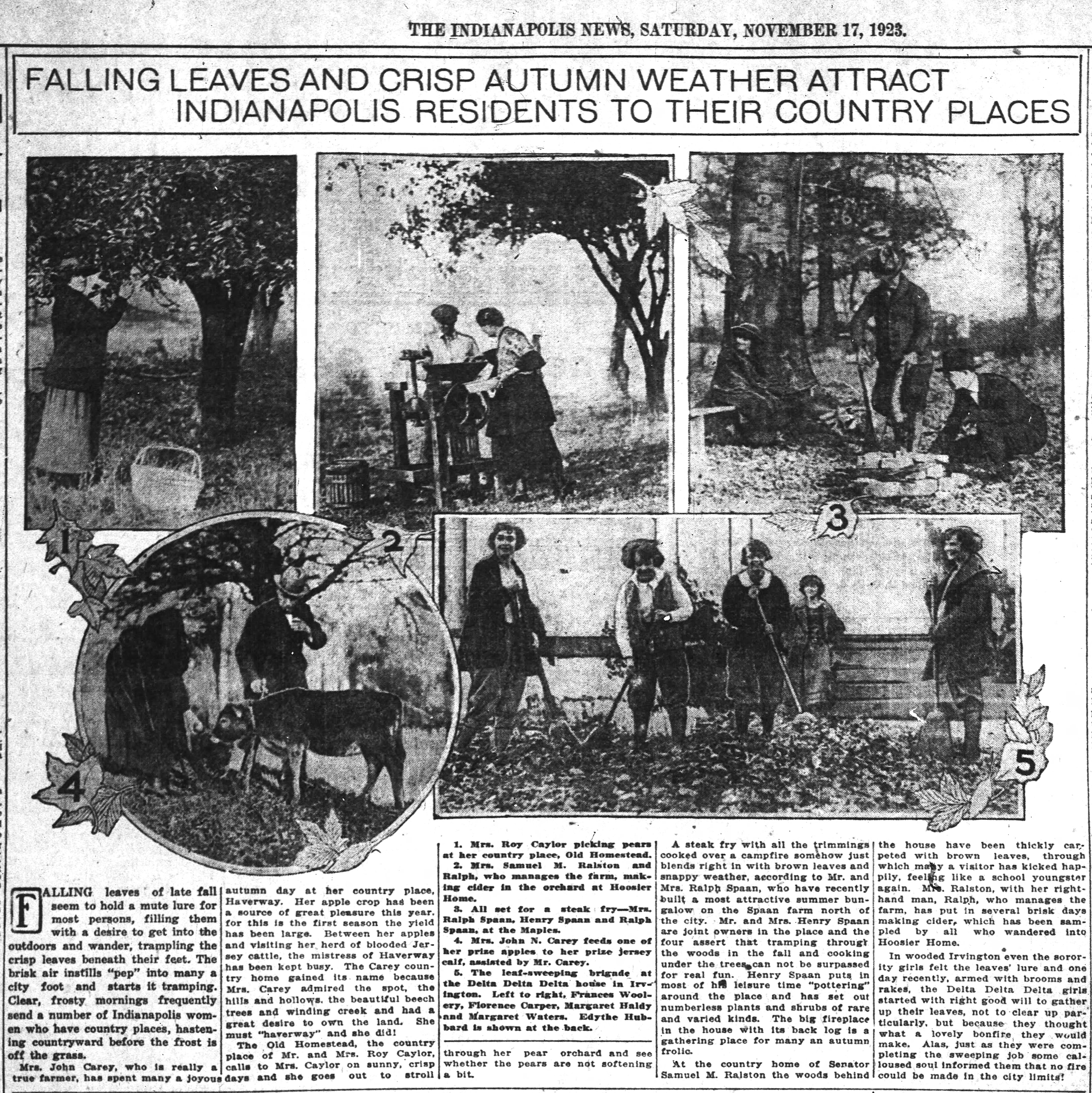 Inspired by a visit to the children’s museum in Brooklyn, New York, in the spring of 1925, Mary convened a meeting of local leaders that led to the creation of the Children’s Museum of Indianapolis.  After having briefly operated out of the Propylaeum’s carriage house at 14th and Delaware Streets and the Garfield Park shelter house on the south side, the museum sought a larger, more permanent location.The death of John Carey in 1926 prompted Mary to offer their home on North Meridian Street as a temporary site for the museum, until a new location could be found.  Despite its temporary location, the Children’s Museum remained at 1150 North Meridian Street for two decades before its board purchased the museum’s first building at 30th and Meridian Streets in 1946.

The loan of the Carey residence for the museum also led to Mary’s decision to make Haverway Farm her primary residence.   She lived at Haverway Farm for the rest of her life.  The address of the farm was known in those days as RD 16 Box 241. “RD” stood for Rural Delivery. 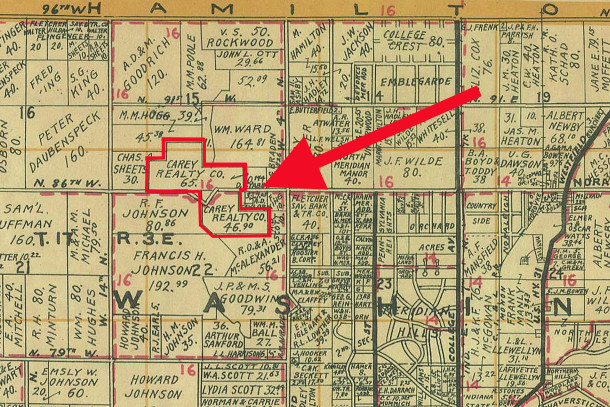 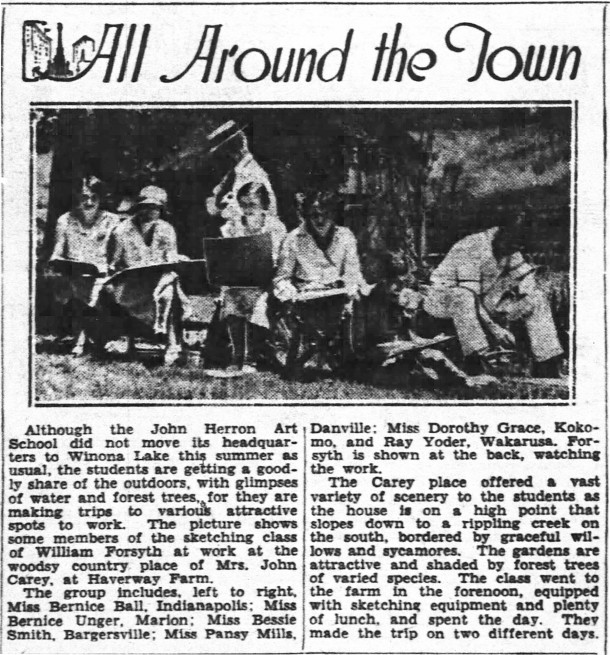 Mary Stewart Carey passed away at Methodist Hospital on June 14, 1938.  Her death made the front page of all of the Indianapolis daily newspapers.

A few days after her death, the contents of Mary Stewart Carey’s will were made known.  Besides her two surviving children and three grandchildren (the children of a deceased daughter), five local organizations were beneficiaries of her estate.

Only two of John and Mary Stewart Carey’s four daughters survived both parents.  Oldest daughter Martha Stewart Carey died in 1925, and youngest daughter Mary Tarkington Carey Appel died in 1931.  Second daughter Eleanor, who had married Ernest Irving Lewis in 1916, resided in Washington, D.C. at the time of her mother’s passing.  Third daughter Ruth, who had married John Morris Haines in 1911, was the only child who still resided in Indianapolis.  The Haineses were the logical heirs to take over the property.  John and Ruth resided at Haverway Farm together until John’s passing in September of 1941.  The widowed Ruth stayed on for a few more years, but by the time of the 1947 city directory, Ruth was no longer listed there. 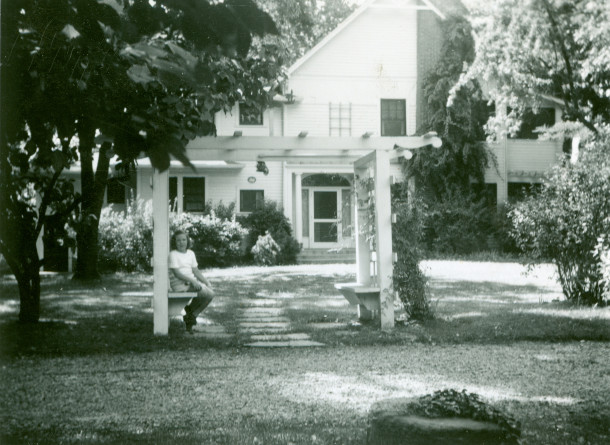 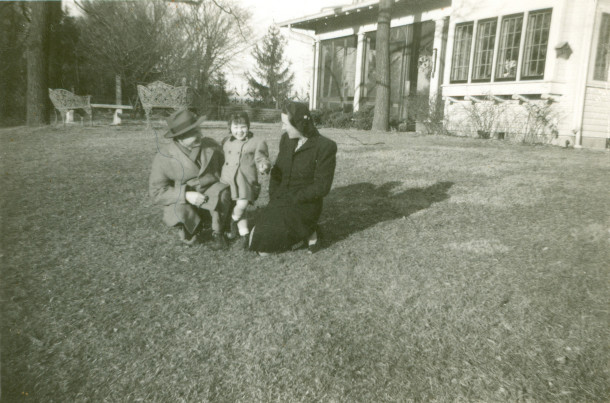 Owners of Haverway from the late 1940s to the mid-1960s were named Tischer, Spivey, and Scott.  During that time frame, the property was no longer identified by a rural delivery route number and was assigned an actual street address of 881 West 86th Street.  Over the years, portions of the acreage were sold to developers, reducing the size of Haverway Farm to its present size of just under 8 acres.

In 1964, Donald J. Hargadon and his wife, Emily Snyder Hargadon purchased Haverway.  They and their children lived there for about 26 years.  Coincidentally, that was about the same number of years that Mary Stewart Carey owned Haverway.  During the years that the Hargadons were the stewards of the land, the city grew out to, and all around, the once remote location.  Nonetheless, the acreage allowed the Hargadons the wonderful experience of living in a rural environment yet being close to urban amenities.

By the time the Hargadons made Haverway their home, the various structures built on the property over the years included the main house, a smokehouse, an arbor to the carriage house, an apartment over the 4-car garage, a barn, a pig shed, a milk house, an equipment shed, and a small one-room house.  Images of Haverway in different seasons appear below. 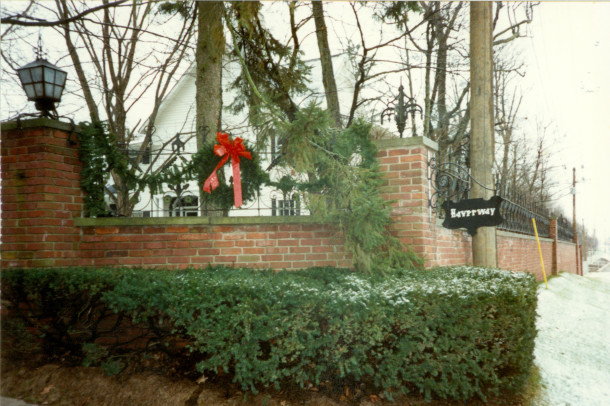 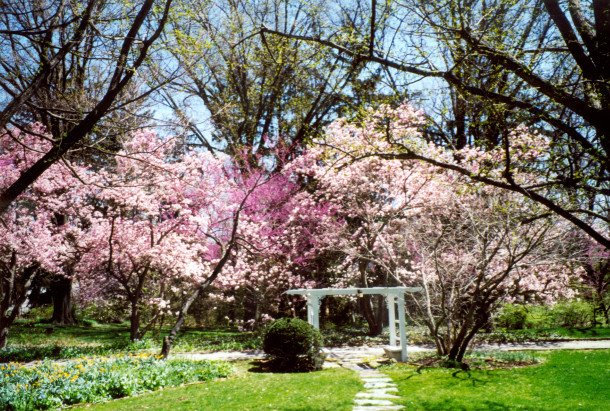 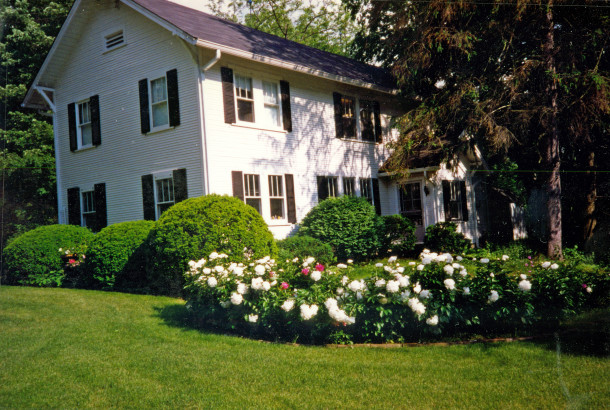 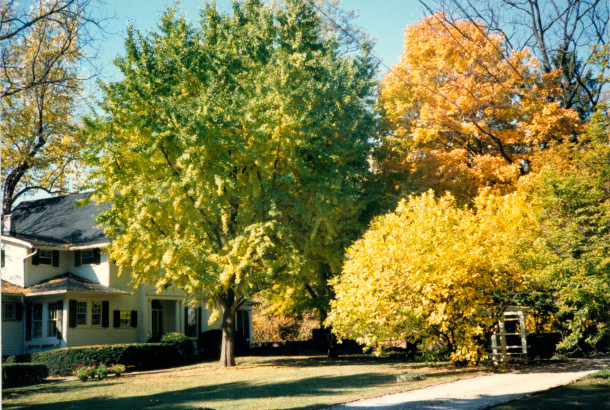 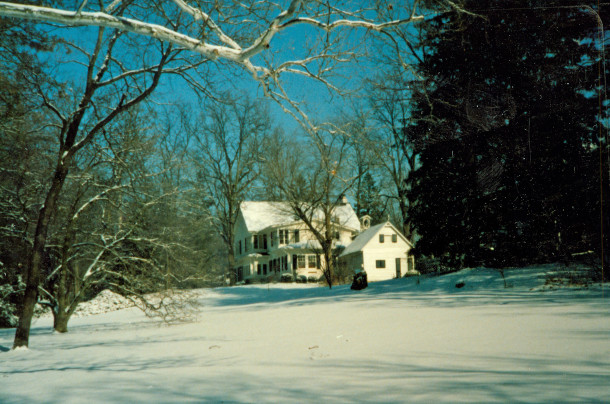 Steven Pettinga, the current owner of Haverway, grew up nearby on Spring Mill Road, a short distance south and east of the property.  When the farm was offered for sale in 2001, Pettinga purchased it with the intention of renovating the original farmhouse.  The farmhouse was believed to have dated to the 1880s.  An 1889 map of Washington Township appears to confirm that fact, as a small rectangular icon representing a residence is shown just east of Williams Creek. 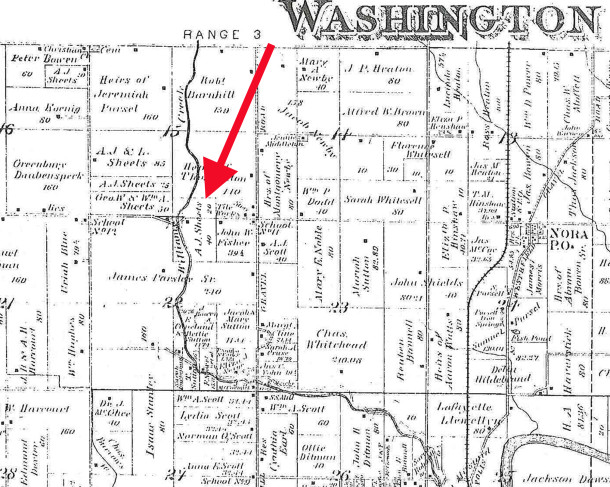 Unfortunately, extensive termite damage to major structural components of the house doomed its survival.  A lovely new home now graces the grounds of Haverway Farm.  However, the original barn has been beautifully restored, and the grounds have been groomed and are well-maintained. 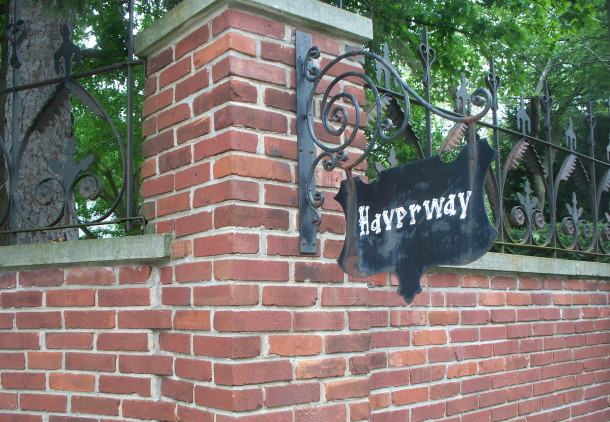 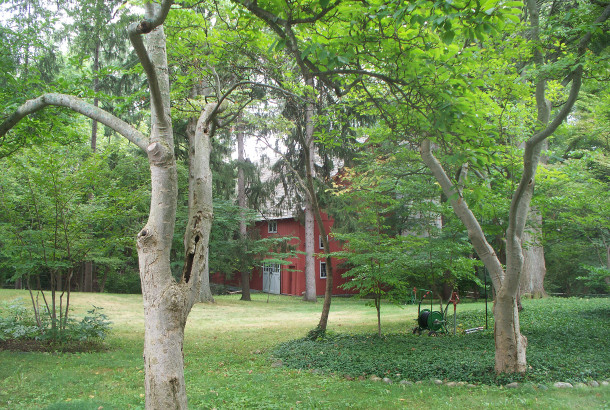