Do you have any history on the house on the SW Corner of 75th and College?  ~  Ed Alexander, Indianapolis

The house that’s located on the southwest corner of E. 75th and N. College Avenue has captured the attention of passersby for many years.  Perched on a hill, the imposing brick home has more than 6,000 square feet, when the space in the attic and basement are included in the calculation.  The current owners, a local attorney and his wife, bought the home in 1983 and have reared four children there.  They have enjoyed the feeling of being in the country, while actually living in the city.  Their wooded lot is well over an acre in size, plus it is directly across the street from the 84-acre Marott Park Woods Nature Preserve.  All kinds of wildlife regularly visit their property. 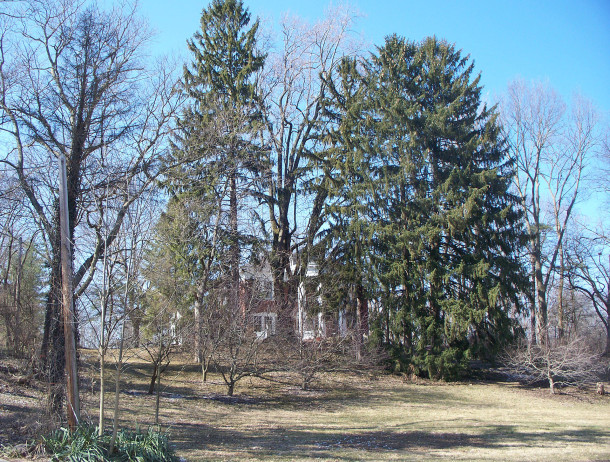 The very first owner of the property at 7466 N. College Avenue was James Bunnel (1780-1836).  Bunnel was born in Ohio and came to Marion County in about 1823, whereupon he purchased several tracts of land in Washington Township from the U. S. government.  Although Bunnel and his heirs owned this piece of land for a number of years, they did not ever construct a home on it.  He, his wife, and their children lived on another tract of land Bunnel purchased, just slightly north and east of this tract, near what later became Sutton’s Corner and later still, the community of Nora. 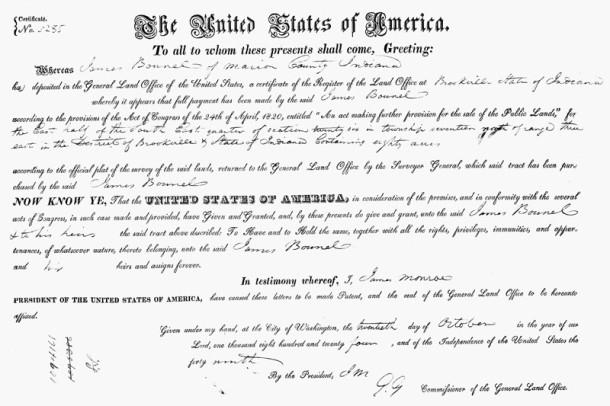 October 17, 1824, Land Patent from James Monroe, President of the U S of A, to James Bunnel ( Ancestry.com)    CLICK TO ENLARGE

Unfortunately, James Bunnel did not live for very long after all of his land purchases.  Bunnel died in 1836 at the age of 56, and his wife Elizabeth died in 1845 at the age of 55. The couple and several other family members are buried in the Union Chapel Cemetery, near 80th and Keystone Avenue. 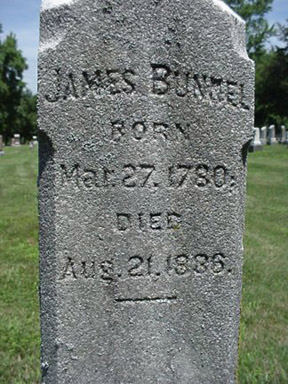 About a decade after the deaths of James and Elizabeth Bunnel, their oldest son and primary heir, Ellis Bunnel, also passed away.  A page from the property’s Abstract of Title shows the legal transactions that occurred in the early and mid-1800s.  As the son died without a will, arrangements had to be made for the care of his minor children. 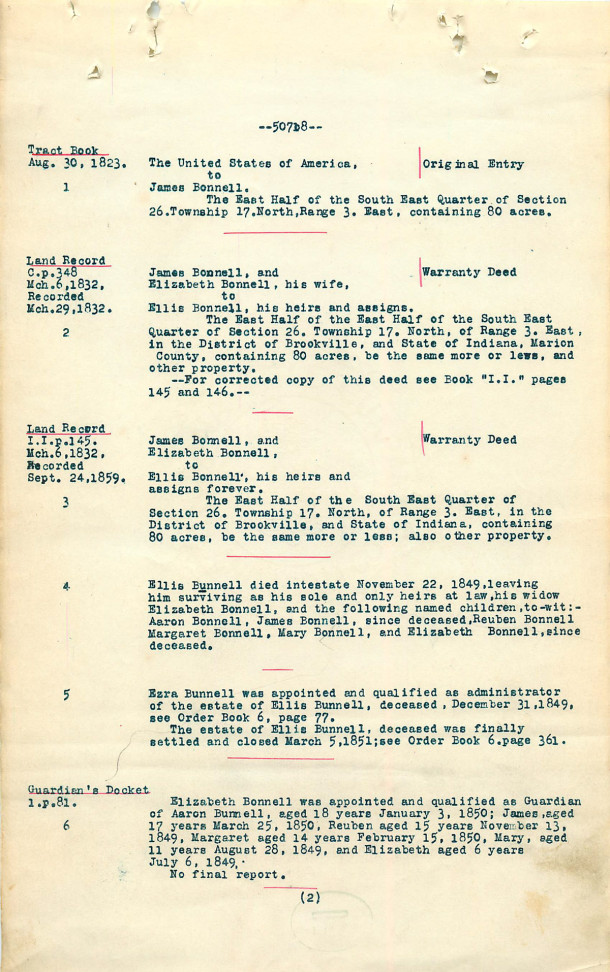 As shown on an 1889 map of Washington Township, subsequent owners of the land included Joses H. Campbell and Margaret Featherston Campbell.  It’s possible there were other owners of the property while the acreage was still unimproved land, but those records are not readily available at this time. 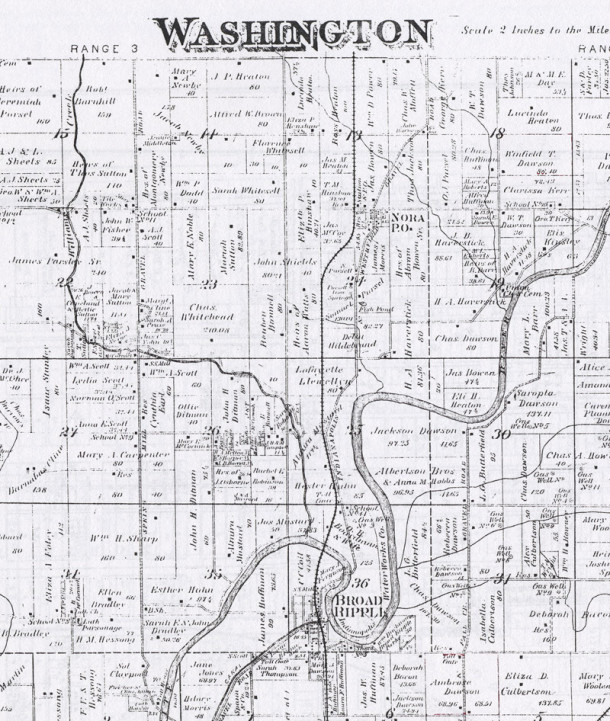 An 1889 Washington Township map indicates the owners then were J. H. and M. Campbell (map courtesy of Alan Hague)   CLICK TO ENLARGE

On March 24, 1908, Edward G. Peck and Olive H. Peck, husband and wife, and Thomas F. Hudgins and Lila P.  Hudgins, husband and wife, acquired just over 4 of the 80 acres of the original land grant to James Bunnel.  Lila Hudgins was the daughter of Edward and Olive Peck.  She had married Thomas Hudgins on 24 Jun 1903.  It’s possible the bride’s parents assisted the young couple in buying the land and building the home as a wedding gift.  The house was completed in 1909 or 1910, following which the Hudginses occupied it for about a decade.

In October of 1919, John Frederick Kassebaum and his wife Bertha DeVaney Kassebaum took title to the property, whereupon Thomas and Lila Hudgins moved to 3964 N. New Jersey Street.  During the years the Kassebaums resided at 7466 N. College Avenue, they built the eponymous mixed-use Art Deco property in Broad Ripple Village on the southeast corner of E. Westfield Boulevard and Guilford Avenue.  Built in 1928, with storefronts below and offices above, the building today houses Usual Suspects and Casba Bar, Periwinkle, Artifacts, Corner Wine Bar, and Ambrosia Ristorante.  When Kassebaum passed away in 1937, Mrs. Kassebaum was his sole heir.  Their only child, Paul DeVaney Kassebaum had died in Asheville, North Carolina, in 1915, at the young age of 22. 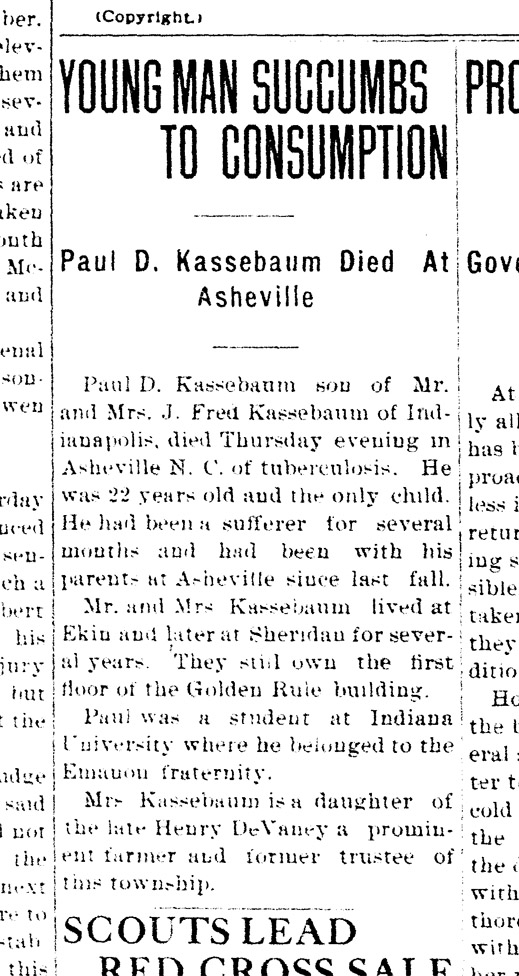 In March of 1938, Dr. William W. Peet, a prominent Indianapolis dentist, his wife Irene Burkhart Peet, and their two children, Elizabeth and William Jr., became the third family to live in the home at 7466 N. College Avenue.  Interestingly, the Peets lived at 4455 Central Avenue when they purchased the Meridian Hills property, and the address to which Bertha Kassebaum moved when she sold the home to the Peets was 4455 Central Avenue.  It would appear the Peets and Mrs. Kassebaum worked out some kind of an arrangement to trade homes.

Dr. and Mrs. Peet owned the home for 45 years.  Following William’s death in 1972 and Irene’s death in 1982, the family conveyed the property to its present owners.  In its 102-103 years of existence, the house has had only four sets of occupants!