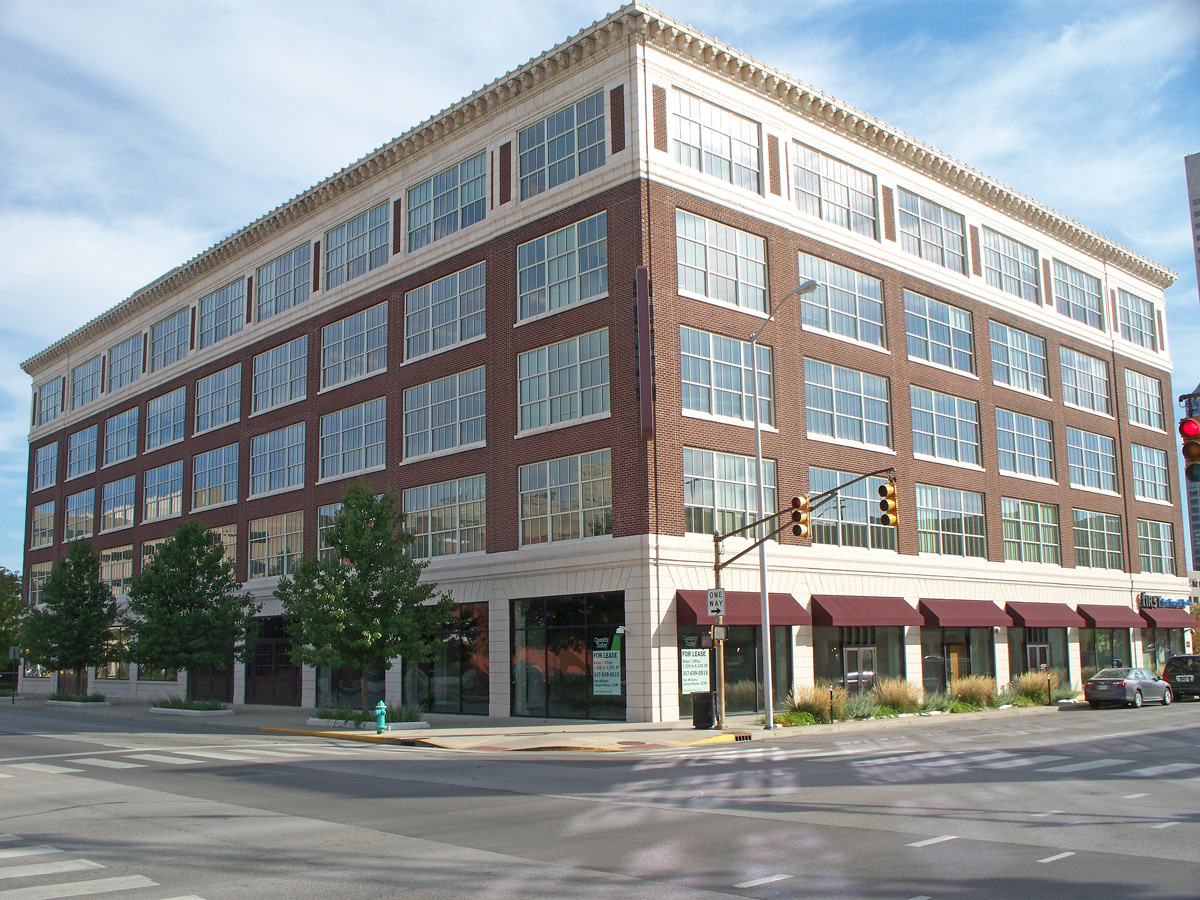 The earliest automobile-related companies in Indianapolis began operating in the late 1890s.  Many of the men who were innovators in the field started out manufacturing carriages or bicycles and transitioned to motorized vehicles.  Among the first were Atlas Engine Works at 1901 Martindale Avenue, International Motor Company’s Waverley Department at 139 South East Street, Charles H. Black Manufacturing Company at 44 East Maryland Street, and National Motor Vehicle Company at 1101 East 22nd Street.

In the early 1900s, as more and more players joined in the car craze, the locations of automobile production plants and sales facilities migrated north and west of Monument Circle.  Many of the companies landed in the blocks just north of the Statehouse, in what had formerly been a residential area.  In the first few decades of the 20th century, there were more automobile-related businesses located on N. Capitol Avenue than on any other street in town.  The stretch of Capitol Avenue from the 300 block to the 1500 block was referred to as “Automobile Row.”  A page from a randomly selected Indianapolis City Directory during that time period (below) illustrates the phenomenon. 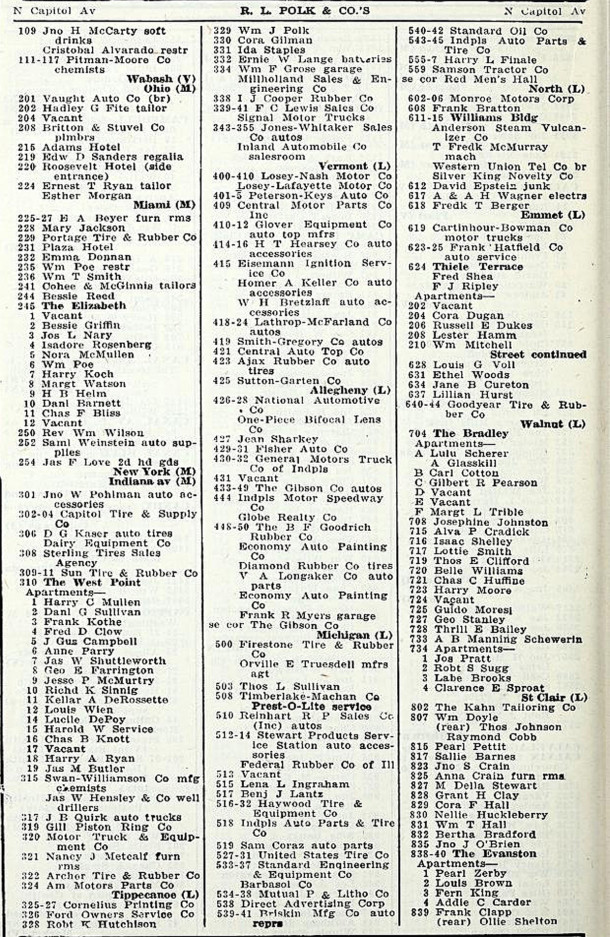 433 N. Capitol Avenue was originally the home of the Gibson Company, which was named for its founder, Cecil Everett Gibson (1881-1943).  Gibson’s first business was a bicycle shop.  He quickly turned his attentions to automobile-related enterprises, once it was obvious that motor vehicles were here to stay.  The 5-story building on the southeast corner of W. Michigan Street and N. Capitol Avenue was built in 1916 and 1917.  The project was designed by the Indianapolis firm of Herbert L. Bass and Company, with later modifications by architect Frank B. Hunter.  However, the Gibson Company Building was never used for automobile manufacturing, as was originally intended by Gibson.  Initially, it housed the sales of Willys-Overland Motor Company vehicles, which at the time were second in production to Ford Motor Company cars.  The Gibson Building was reported to have contained one of the most ornate showrooms in the city. 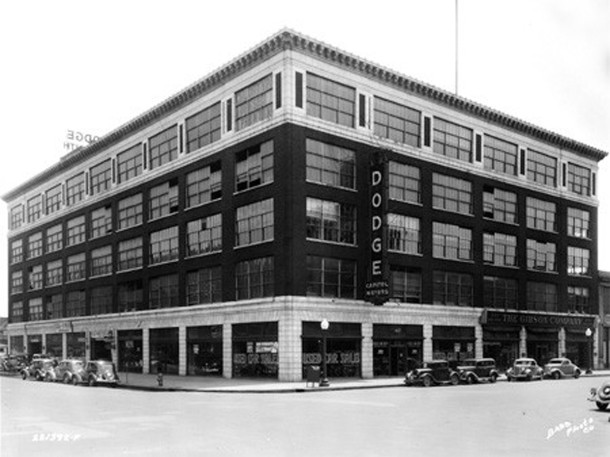 Early on, Cecil Gibson’s partner was Carl G. Fisher, who had built the first automobile showroom in Indianapolis in 1903.  The Fisher-Gibson Company was founded in 1911, the same year Carl Fisher, Arthur Newby, James Allison and Frank Wheeler co-founded the Indianapolis Motor Speedway.  In 1912, Carl Fisher withdrew from the Fisher-Gibson Company to devote his energies to developing the Prest-O-Lite automobile headlight system.  Fisher’s name was dropped, and the company name reverted to the Gibson Company.  Management of the Gibson Company passed to Joseph M. Bloch, Charles B. Sommers, and Aaron Waldheim.  Charles B. Sommers’ unique home on Cold Spring Road was the subject of a Historic Indianapolis article in 2012, which you can read here. 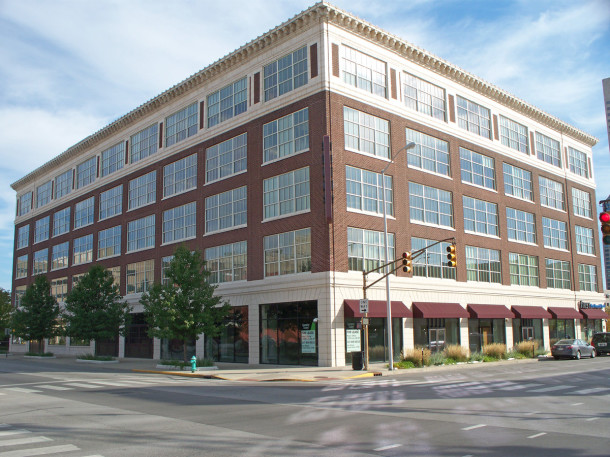 The Gibson Company primarily sold auto parts, auto accessories, and home appliances.   The non-automotive products included Norge refrigerators, Hamilton dryers, and Arvin televisions.  Joseph M. Bloch, Charles B. Sommers, and Edward M. Glass formed a companion company, the Atlas Manufacturing Company.  That entity eventually assumed ownership of the Gibson Company Building, which it retained until 1985.  Since that time, the Gibson Compamy Building has been owned by American United Life Insurance Company and is managed by Lake County Trust Co.  The Gibson Company Building was placed on the National Register of Historic Places in 2006.  Today it houses the technology teams of ExactTarget, as well as Sahm’s Café and Sahm’s Tavern. 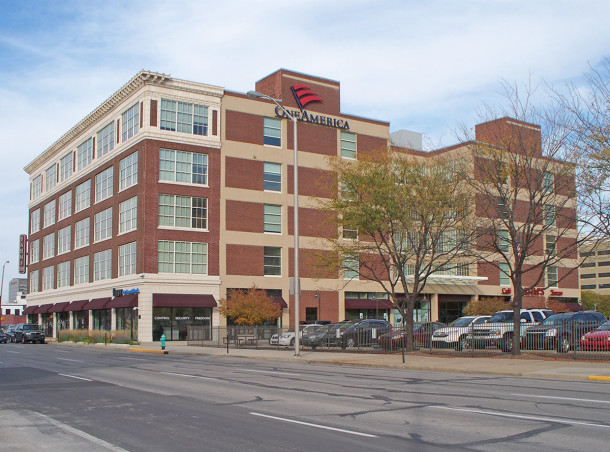 The Stutz Motor Car Company was founded in 1911 by Harry Clayton Stutz (1876-1930) under the name of Ideal Motor Car Company.  After his car did well in the very first Indianapolis 500, Stutz renamed his company after himself.  The first building in the Stutz complex was constructed in 1911, with additional structures following over the next eight years.  In 1919, Stutz needed money to fund his automobile production, so he sold stock in the company.  After a falling out with a stockholder, he decided to sell his interest in the Stutz Motor Car Company.  Bethlehem Steel Corporation director Charles M. Schwab subsequently took control of the Stutz Motor Car Company.  Although Stutz himself was no longer involved in the company he founded, it continued to be well-known for its innovation and quality throughout the 1920s and into the 1930s.  After the stock market crash of 1929, the company suffered from the economic hardships of the Great Depression, eventually closing its doors in 1935. 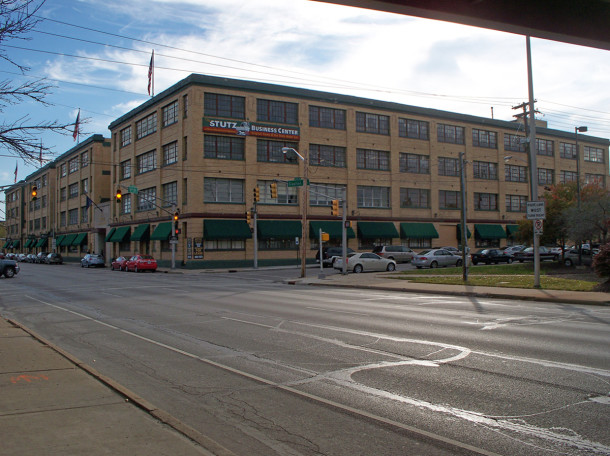 In 1940, Eli Lilly and Company purchased the former Stutz properties to house its packaging division.  It remained a Lilly packaging facility until 1982, following which time the buildings stood vacant for many years.  In 1993, the structures were purchased by local developer Turner Woodard, who adapted the seven buildings into a business center for small and mid-size companies.  Stutz Business Center tenants represent a wide variety of professions, including attorneys, architects, advertising firms, and a number of artists’ studios.  The Stutz Business Center also houses the breakfast and lunch eatery, Bearcats Restaurant. 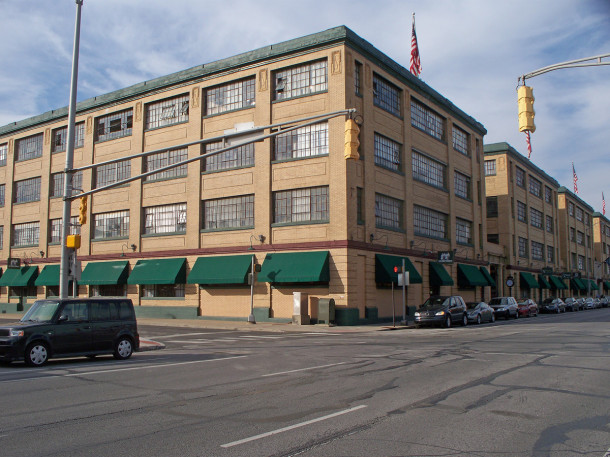 1402 North Capitol Avenue was originally the home of the H C S Motor Car Company, which was also started by Harry C. Stutz.  H C S was Stutz’s second automobile manufacturing company.  When he started up the new company and had to give it a different name, he decided to use his initials.  Designed by the architectural firm of Preston C. Rubush and Edgar O. Hunter, the 4-story brick H C S Motor Car Company Building was constructed on the northwest corner of West 14th Street and North Capitol Avenue in 1921.  In May of that same year, the H C S Roadster was the pace car for the Indianapolis 500-Mile Race.

Stutz also founded the Stutz Fire Engine Company about the same time that he started H C S Motor Car Co.  It was located in a building across the street at 1411 North Capitol Avenue.  H C S manufactured cars meant for personal use only until 1925.  In its final few years years of existence, H C S produced taxis.  The H C S Cab Manufacturing Company ceased operation in 1927.  The production of fire trucks was discontinued in 1929, when the stock market crashed.  Harry Stutz died in 1930 from a ruptured appendix, which had been misdiagnosed as influenza.  The Depression and Stutz’s death put an end to his contributions to the automobile industry. 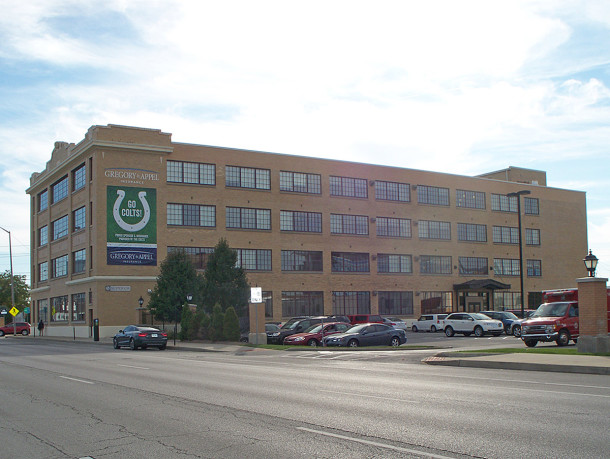 The H C S Motor Car Company Building was purchased by the Continental Optical Corporation of New York in 1928.  Continental was an independent maker of eyeglasses.  It moved its operations to Indianapolis, and the building became its lens factory for nearly half-a-century.  The property was purchased by S. Cohn & Son Auto Company in 1977, a local, family-owned parts and accessories business.  When it relocated to the northwest side in 2004, the property was then purchased by 1402 Associates LLC, a joint venture between members of two local companies, Shiel Sexton and Gregory & Appel.

Shiel Sexton, an Indianapolis development firm, is located at 902 North Capitol Avenue in yet another historic building with an interesting history that involved the Vonnegut family.  Gregory & Appel, the oldest and largest independently owned insurance agency in Indiana, has been located in several different historic buildings over the 129 years of its existence.  Under the guidance of these two venerable Indianapolis companies, the H C S Motor Car Company Building underwent a complete renovation and became the home of Gregory & Appel, as well as several other firms.  1402 N. Capitol Avenue was placed on the National Register of Historic Places in 2009.  Many people are familiar with the first facility Stutz built at 1008 N. Capitol, because that building retains the Stutz name today, but fewer are aware that 1402, just a few blocks north, was also a Stutz building. 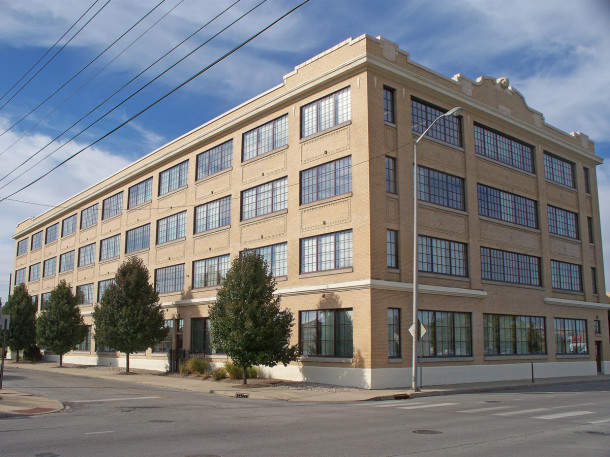 Coincidentally, these three properties discussed above will be on a tour of historic buildings this Friday during the 2013 National Preservation Conference of the National Trust for Historic Preservation.  Dubbed “Preservation at the Crossroads,” this is the first time the prestigious annual gathering has ever been held in Indianapolis.  On Friday afternoon, November 1st, convention attendees will visit these and several other industrial or commercial buildings dating to the early 1900s, all of which have been beautifully adapted to modern uses.  You can view a 2-minute video about the National Preservation Conference here.