What were the first public schools in Indianapolis, and where were they located?  ~ Ann F., Indianapolis

From the time non-native settlers began to populate the area that in 1821 became the City of Indianapolis, people met in churches and homes to learn about subjects that were of interest to them. However, these study groups were private assemblies.  Various seminaries and institutes also operated in the early and mid-1800s, but they charged tuition, and none of them survived for any length of time.

It wasn’t until 1847 that Indianapolis voters overwhelmingly supported a local referendum asking for free public schools, and it wasn’t until 1848 that the entire state of Indiana endorsed the concept.  Following that statewide mandate to provide free instruction for all children, a primary school was built in each of the seven wards of Indianapolis that were in existence at the time.  As other areas of Marion County were later annexed to the city, additional schools were built in the newly created wards. 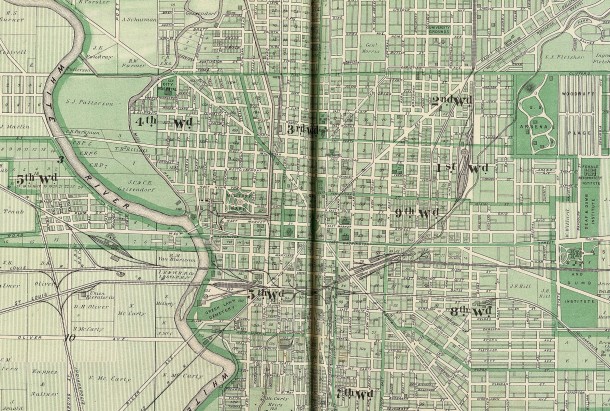 In the early 1900s, the Indianapolis Board of School Commissioners also decided to assign a name to each of the numbered elementary schools.  Beginning with the 1903 Indianapolis Directory, each subsequent year’s directory included more and more names of schools alongside the schools’ numbers.  The names recognized a variety of men and women who had distinguished themselves in some way.  They included authors, poets, teachers, artists, suffragettes, clergymen, school board members, social workers, U.S. Presidents, etc.

School 1 was named the Hyde School.   The school was located on the southwest corner of East Vermont and North New Jersey Streets.  The building no longer exists.  Today, that parcel of land is part of the parking lot for the downtown Marsh Supermarket.  When a new School 1 was built on the northeast corner of East 36th and Gale Streets, several decades later, School 1’s name was changed to the George Rogers Clark School. 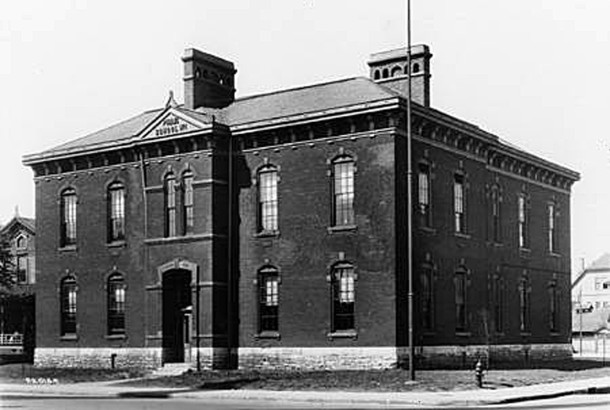 School 2 was named the Benjamin Harrison School.    It was located on the northwest corner of East Walnut Street and North Delaware Street.  The building no longer exists.  Today, that is the location of the John Morton-Finney Center for Educational Services, the headquarters of Indianapolis Public Schools.  In 1958, a new School 2 building was erected at 725 North New Jersey Street.  The second Benjamin Harrison School still exists today. 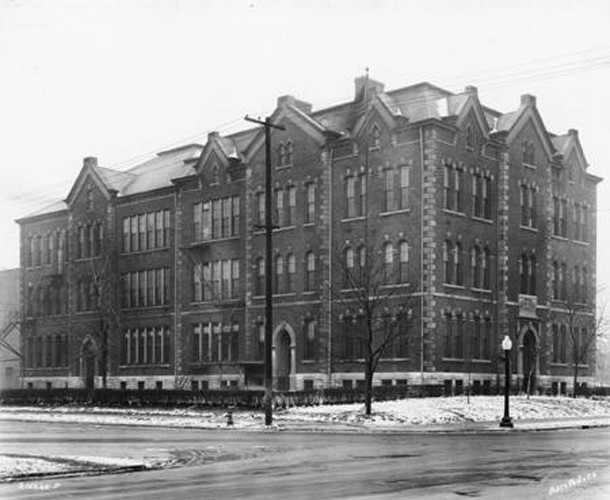 School 3 was named the Lucretia Mott School.  It was first on the east side of North Meridian Street, just north of Ohio Street.  It later was rebuilt on the east side of Rural Street, in the first block north of East Washington Street. The original School 3 building no longer exists; today, the original location is the site of the Birch Bayh Federal Building and United States Courthouse.  The second School 3 building is still standing but is no longer in use as a school; it appears the building is being converted to apartments. 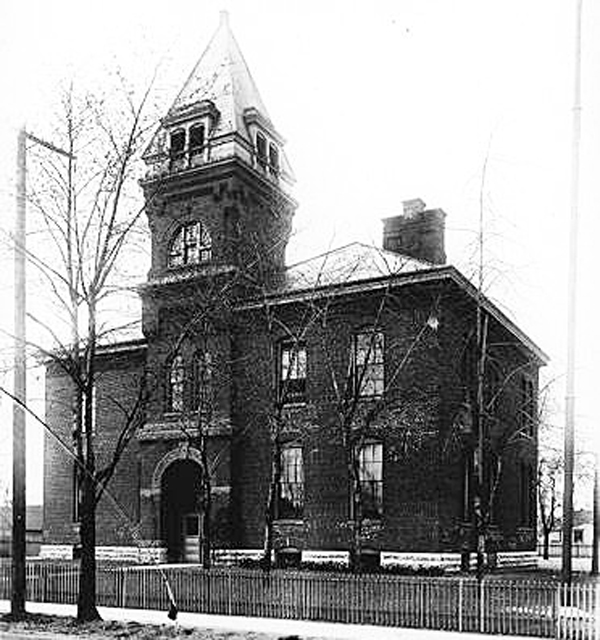 School 4 was named the Mary E. Cable School.  It was on the northeast corner of West Michigan Street and North Blackford Avenue.  The building no longer exists.  Today, that site is part of the IUPUI campus and has a multi-story parking garage erected on it. 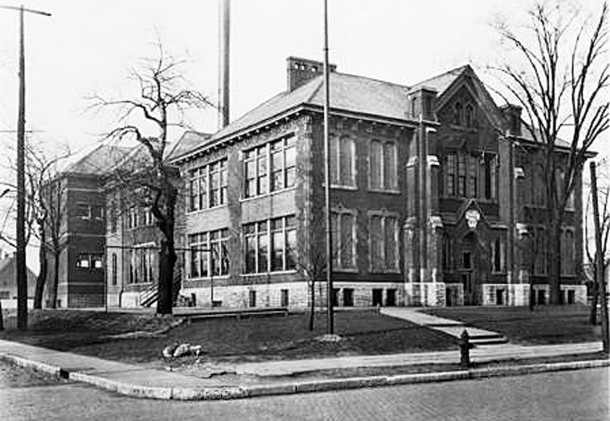 School 5 was named the Oscar C. McCulloch School.  Its original location was on the south side of West Maryland Street, between Mississippi (now Senate) and Missouri Streets.  That block of Maryland is now part of the multi-block Indiana Convention Center.  In later years, School 5 was rebuilt at 612 West Washington Street.  Over the years, five different buildings housed School 5.  The last of the five structures was torn down when White River State Park was being built.  Fortunately, a portion of the façade was rescued and has been installed in the lobby of the Indiana State Museum, which now stands about where the where the fourth and fifth of the School 5 buildings formerly stood. 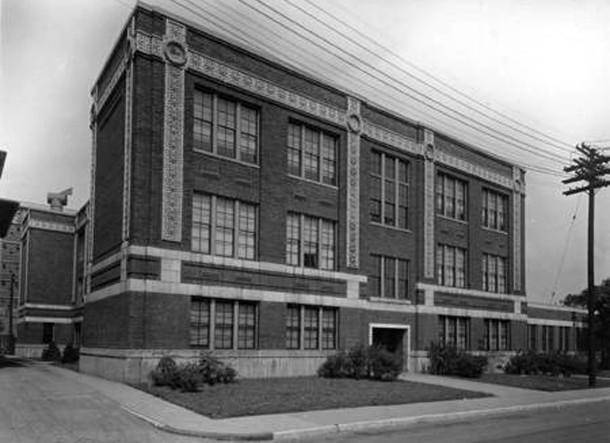 School 6 was named the Austin Brown School.  It was located on the southwest corner of Union and Phipps Streets.  The school no longer exists.  Neither do the streets.  The thoroughfares were vacated at some point, and a new building was constructed over them by Eli Lilly and Company in 2000. 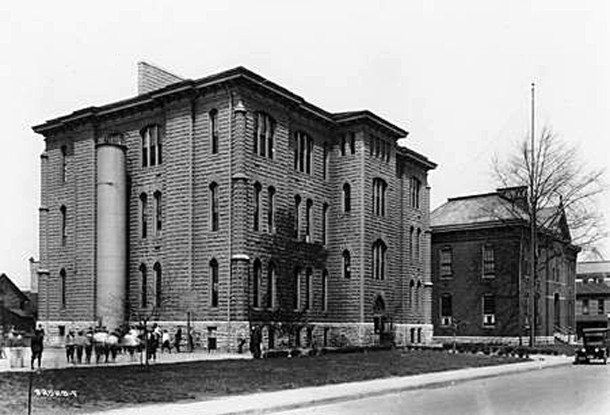 IPS School 6 was on the southwest corner of Union and Phipps Streets . Today it’s the site of an Eli Lilly and Company facility (W. H. Bass Photo Co. Collectio,n courtesy of the Indiana Historical Society)

School 7 was named the Thomas Jefferson School.  The building still exists today, but not as a school.  It is located on the north side of East Bates Street between Concordia and Davidson Streets. I could not find a vintage photo of IPS School 7, so I took a photo of the property as it appears today.  The stone slab with the school’s name carved in it still appears over what was probably originally the school’s main entrance.  It’s now used as an office building. 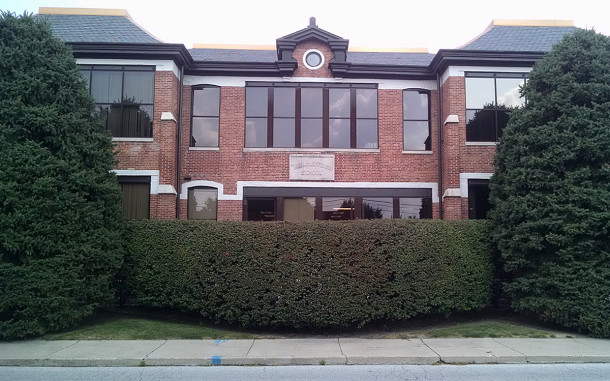 IPS School Number 7 was located on the north side of East Bates Street, between S. Concordia and S. Davidson Streets     (2015 photo by Sharon Butsch Freeland)

The first free public high school in Indianapolis was attempted in 1853 in a former seminary building on the southwest corner of University Park.  It was closed in 1858, due to the lack of adequate funding.  It wasn’t until 1864 that another public high school was opened, as a result of the tireless efforts of two educators named Caleb Mills and Abraham Shortridge.  The second time around, the high school would not just survive; it would thrive.

The first principal of the Indianapolis High School was William A. Bell.  For three years, the secondary school was housed in what had previously been the First Ward’s primary school building at Vermont and New Jersey Streets (see the School 1 photo towards the beginning of this article).

Then from 1867 to 1872, the high school was located in Circle Hall, a three-story building in the northwest quadrant of Monument Circle, on the corner of West Market Street and The Circle.  Circle Hall was formerly the location of Second Presbyterian Church, where Henry Ward Beecher was pastor from 1839 to 1847.  The Indianapolis Public High School held its first graduation in 1869. 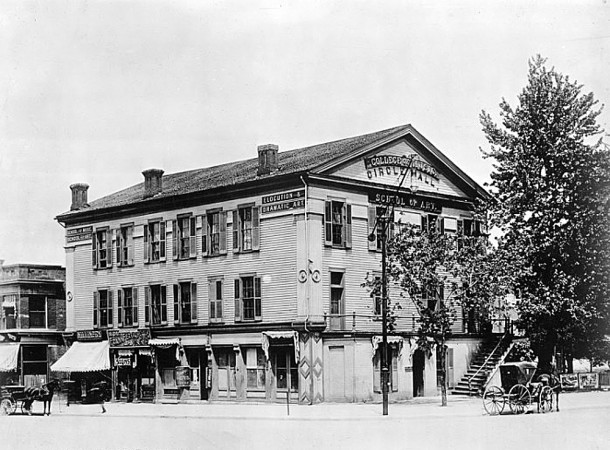 Circle Hall, in the northwest quadrant of The Circle, served as the first home of the newly organized Indianapolis High School (photo courtesy of the Indiana Historical Society)

From 1872 until 1885, the Indianapolis High School was located in the former Baptist Female Seminary at East Michigan and North Pennsylvania Streets.  When the building was declared unsafe, it was torn down, and a new building was erected on the same site.  Classes met in nearby churches while the new building was being built. 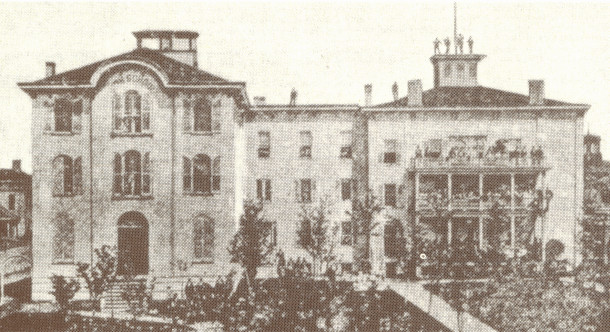 From 1872 to 1885, Indianapolis High School occupied the former Baptist Female Seminary at Michigan and Pennsylvania          (photo scanned from the book, Shortridge High School, 1864-1981, in Retrospect by Laura Sheerin Gaus)

From 1885 until 1928, the rebuilt high school occupied the entire block of North Pennsylvania Street between Michigan and North Streets.  Today, that site is the location of the Minton-Capehart Federal Building. 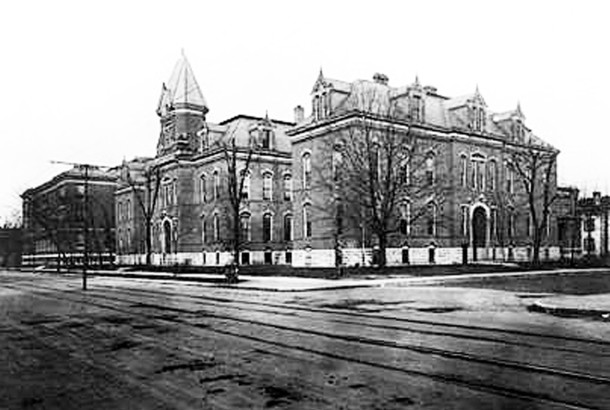 By the late 1880s, the enrollment at Indianapolis High School exceeded the building’s capacity.  A second high school was established on Virginia Avenue in a former grade school.  As there was a growing interest in job training for students who did not have the aptitude or the funds to continue their education at a college level, a brand new high school was built in a triangular block of land surrounded by South Meridian Street, West Merrill Street, and Madison Avenue.  The new secondary school was initially named “Manual Training High School.”  It was later renamed Emmerich Manual High School, in honor of the man who had been its principal.  The new high school opened in February of 1895, and the old building in which it had operated became a grade school again.  Emmerich Manual High School’s previous building still stands today, although it is no longer a school.  Like the land on which Austin Brown School 6 once stood, just south of it, the former Manual Training High School’s property is part of the Eli Lilly and Company campus. 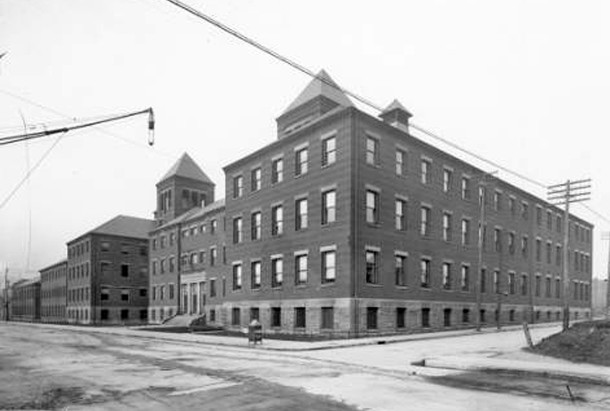 Since the Indianapolis High School was no longer the only Indianapolis high school, a different name was necessary for the city’s original secondary school.  In 1896, it was renamed “Shortridge High School,” in honor of IPS’s first superintendent.

By the 1920’s, the core of the city had become denser and more commercial.  The dirt and noise made it less desirable to live in the center of town, plus the invention of the automobile made it possible to get to work downtown quickly but live a few miles out from all of the hustle and bustle.  Many new residential neighborhoods were built north of Fall Creek in the first quarter of the 20th Century, so IPS made the decision to build a new Shortridge High School on the north side.  Several sites were considered, including the northwest corner of 40th and Meridian Streets and the southwest corner of 46th Street and Central Avenue.

The final selection for the location of the new Shortridge was the northeast corner of 34th and Meridian Streets. Construction began in 1927 and was completed in 1928.  Still in that location today, Shortridge High School began its 151st year in August as an International Baccalaureate World School. 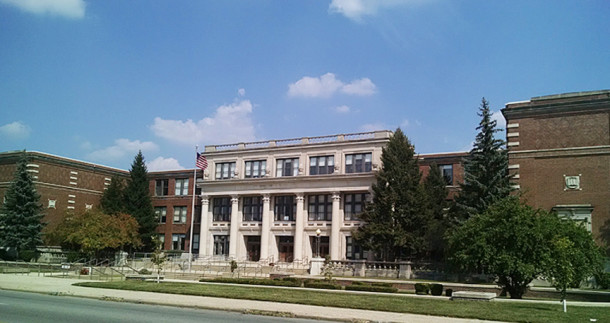 The current Shortridge High School building has stood on the northeast corner of E. 34th and N. Meridian Streets since 1928 (2015 photo by Sharon Butsch Freeland)

From its humble beginnings of just seven small ward schools back in 1853, the number of IPS elementary schools ultimately reached 114 in the latter part of the 20th Century.  From a single high school that opened its doors back in the fall of 1864, the number of IPS high schools grew to eight in the second half of the 20th Century.  The largest enrollment in IPS’s history can be attributed to the Baby Boomer generation of children born in the two decades immediately following the end of World War II.