Last week, I tweeted some photos that I took at Crown Hill Cemetery of the grave of Harry Keys, an Indianapolis resident who was on the ill-fated USS Maine. My tweets got the attention of a high school history teacher who had done research on the mass burial of the casualties.  She had discovered that there was only one person on board from Indiana, and that he is not buried at Arlington National Cemetery with the other sailors. I wondered if this might be something you’d want to investigate further.  ~ Tom D., Indianapolis

The USS Maine was one of the United States of America’s earliest battleships.  It was 319-feet long, weighed over 6,682 tons, and cost more than $2,000,000 to build.  In January of 1898, the Maine and its crew of 300 men were sent from Key West, Florida to Havana, Cuba to protect American interests there, after Cuba had begun to rebel against repressive Spanish colonial authorities in residence there. 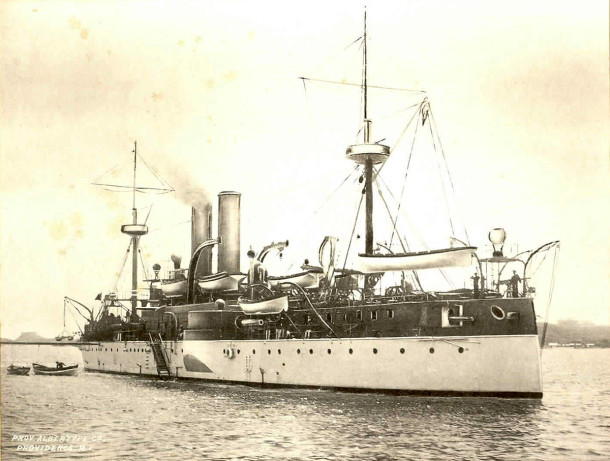 USS Maine as it appeared prior to the explosion that sank the battleship on February 15, 1898, in Havana Harbor, Cuba     (photo by the Providence Albertype Company, Providence, Rhode Island)

Many Americans are familiar with the historic phrase, “Remember the Maine,” but not everyone knows that there was a second part to that rallying cry, “To hell with Spain.”  These words were on the lips of many U.S. citizens after the USS Maine exploded in Havana Harbor on the night of Tuesday, February 15, 1898, as many believed Spain to be responsible for the sinking of the ship and the deaths of 260 men.

Although the cause of the explosion was never proven, the public pressed President William McKinley to declare war with Spain.  By April 25th, the conflict that is now referred to as the Spanish-American War was underway.  With forces like Commodore George Dewey’s formidable U.S. Naval squadron and Teddy Roosevelt’s Rough Riders, the war was woefully one-sided.  By year’s end, Cuba had gained its independence from Spain, and the United States had acquired the Philippines, Guam, and Puerto Rico from Spain.

The only person from Indiana who was on the USS Maine when it went down was 21-year-old Harry J. Keys.  He was born just north of Terre Haute on November 21, 1876, to Henry Keys (1842- ?) and Matilda Kight Keys (1858-1949). The family moved to Indianapolis in 1884, when their son was 7 years old.  They resided at 517 North Liberty Street.  Liberty was renamed Park Avenue at the end of the 19th century, the name by which the street is still known today.  The Keyses were among the earliest members of the newly built Fletcher Place Methodist Episcopal Church.  Harry probably attended Clemens Vonnegut School 9 and Indianapolis High School (renamed Shortridge High School in 1897). 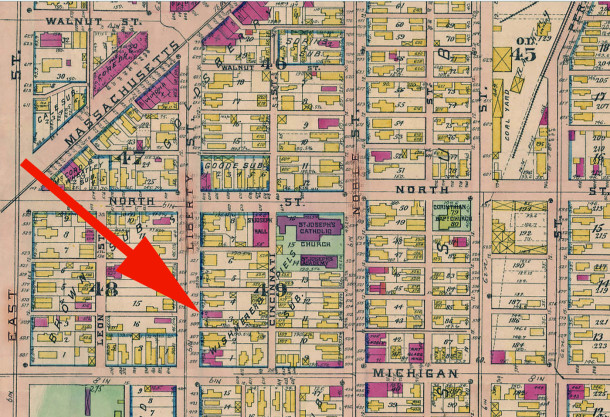 In 1896, Harry joined the United States Navy.  Either Harry’s father passed away or his parents divorced, because on March 18, 1896, his mother married John J. Turner, a U. S. postal carrier.   From the moment Harry’s mother received news of the sinking of the USS Maine, she and her new husband mounted efforts to have her son’s remains returned to Indianapolis, should he be among the dead.  Sadly, Harry was in fact one of the casualties, but it would be more than two years before his body came home.

February 18, 1898 newspaper clipping about the Maine tragedy      (The Indianapolis News) 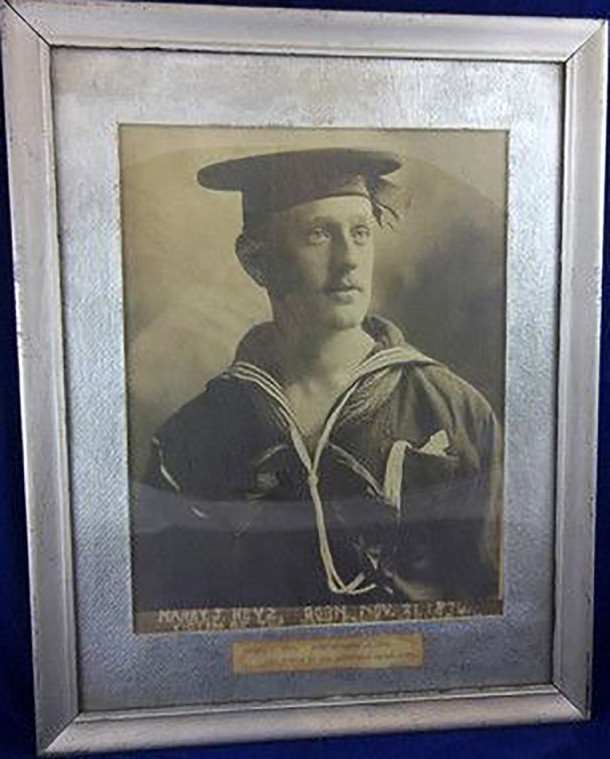 The dead who were recovered at the time of the tragedy were buried in a cemetery in Havana.  In 1899, 165 bodies were exhumed and reinterred in Arlington National Cemetery. 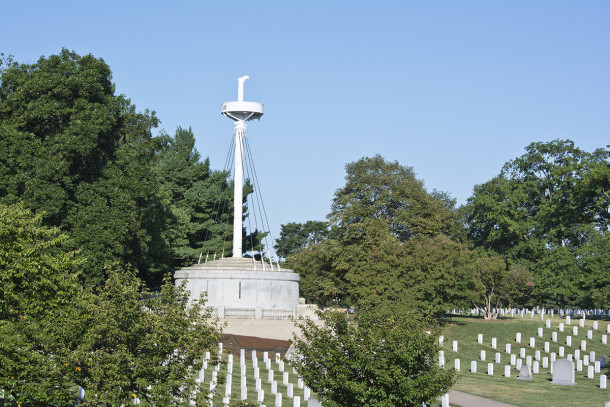 Harry was among those buried first in Havana and then in Arlington, but his mother and stepfather remained vigilant about having his body returned to Indianapolis.  They were aided by Indiana Senator Charles Warren Fairbanks (1852-1918), who would go on to become 26th Vice President of the United States in 1905.  It was more than two years before Harry was finally laid to rest in Crown Hill Cemetery.  The burial took place on Thursday, April 12, 1900. 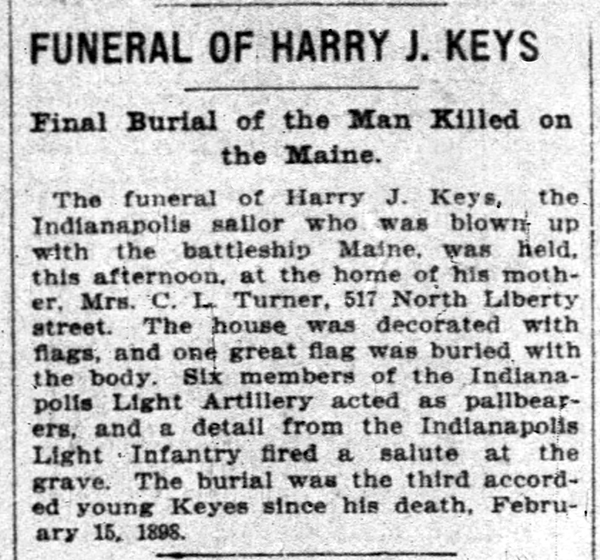 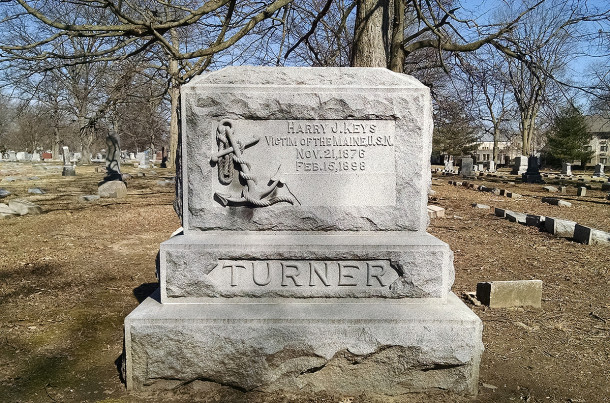 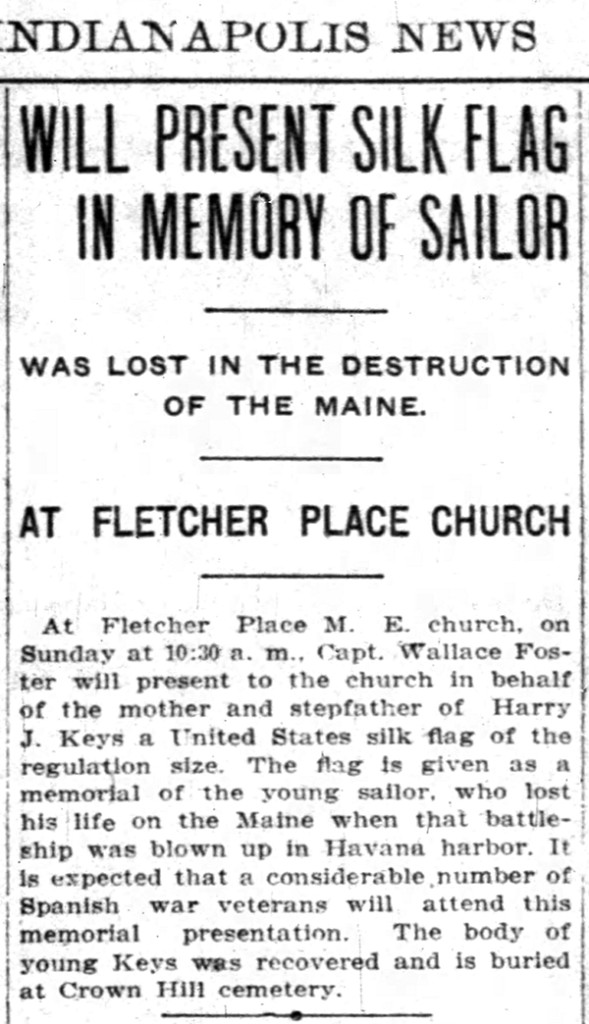 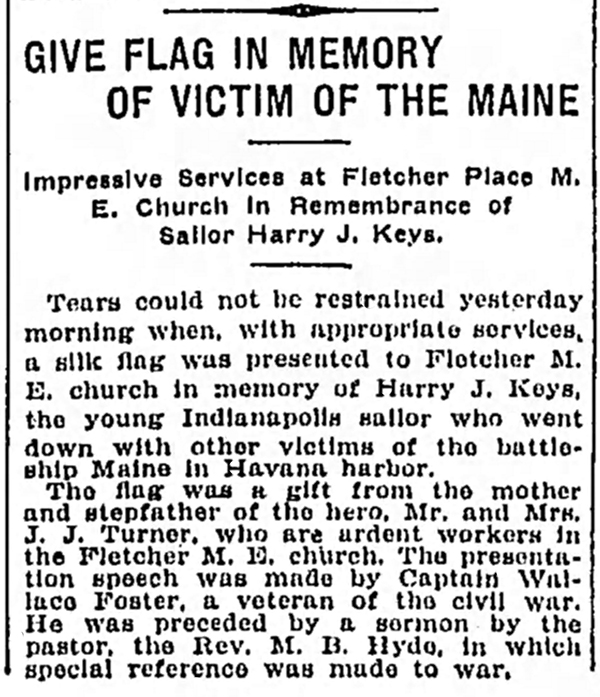 One of the memorials to honor Harry J. Keys was a beautiful stained glass window that was installed in the Fletcher Place Methodist Episcopal Church.   Located on a point at the intersection of South East Street, Fletcher Avenue, and Virginia Avenue, the former house of worship has been converted to condominiums in recent years.  Thanks to the assistance of Realtor Rob Measel of Everhart Studio, which currently represents sellers of units in the building, I was able to get inside and take a photo of the 2-story high window that now graces the living room of one of the private residences.

The USS Maine remained submerged for more than a decade.  It wasn’t until 1911 that the battleship was finally raised.  It took two years to complete, during which time 66 more bodies were recovered from the wreckage. 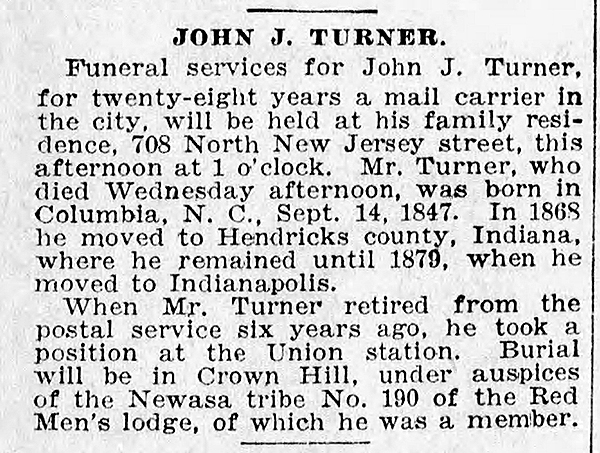 Tillie remained an active member of the Fletcher Place Methodist Episcopal Church.  For half-a-century, the church held an annual memorial service on the Sunday closest to February 15th, the date of the USS Maine’s sinking. 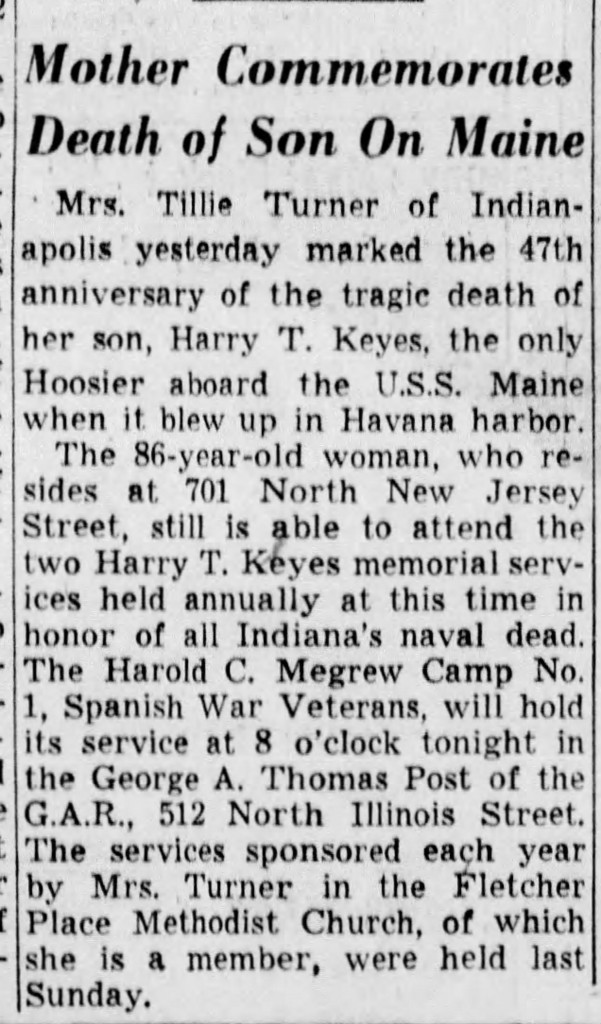 Matilda “Tillie” Kight Keys Turner mourned the loss of her son for the rest of her life.  She died on May 9, 1949, having grieved for more than half-a-century.  She was buried at Crown Hill Cemetery, alongside her second husband and her son. 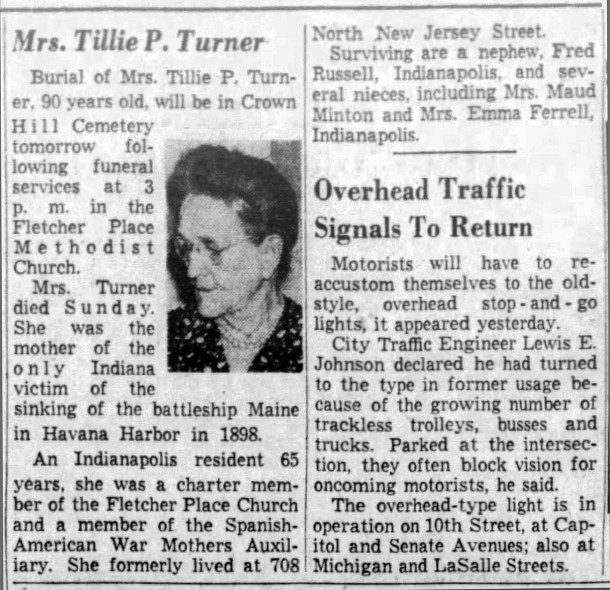