I have recently moved back to Indianapolis after living most of my adult life in Virginia.  I still have vivid memories of a fire in a business near my family’s home, when I was about three or four years old.  I am haunted by memories of the charred remains of the building and the smell of smoke that hung in the air for days afterward.  I don’t know the exact date or the exact location of the fire, but it would have been in 1950 or 1951 and in the Meridian-Kessler area.  The name of the business was Lux Laundry.  Can you provide any information on that fire? ~ Martha Q., Carmel

You have a very good memory to be able to recall an event that occurred nearly 63 years ago, especially since you were quite young at the time it happened.  It obviously left an indelible impression on you.

The fire in the Lux Laundry occurred on July 30, 1951.  The business was located at 5301 Winthrop Avenue, which backed up to the tracks of the then still operational Monon Railroad.  Today the property is on the popular Monon Trail greenway.

It was late in the work day on a Monday evening, and most of the 130 Lux Laundry employees had gone home.  Only a few people remained on the premises.  At about 6:35 p.m., a delivery truck driver returning to the plant from his route discovered fire in the ceiling at the rear of the structure.  He immediately reported it to his supervisor, who called the fire department.  While they were waiting for help to arrive, another employee tried unsuccessfully to put out the flames with a fire extinguisher.

Station 32 at Westfield Boulevard and Guilford Avenue, Station 14 at 30th and Kenwood Avenue, and Engine 8 in Millersville all received the alarm.  By the time the firefighters arrived, flames from the building were shooting 100 feet into the air and threatened the laundry’s 35,000-gallon wooden water tower. 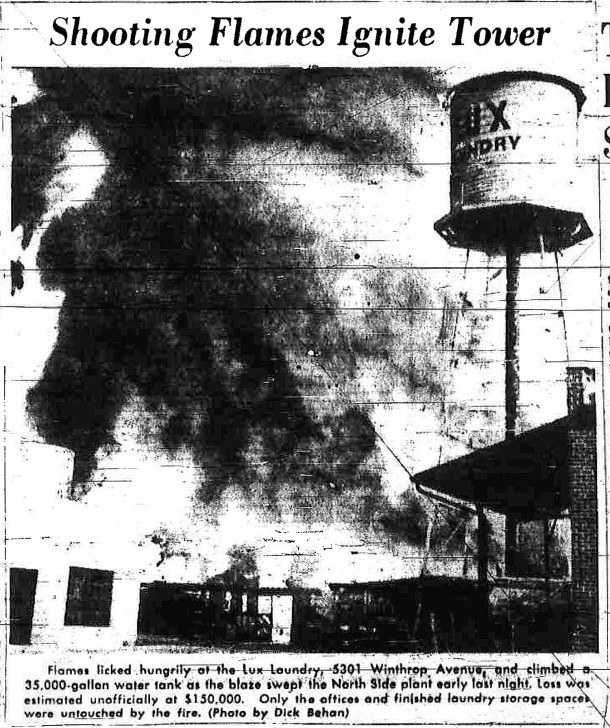 News of the fire spread quickly, and people came on foot and in cars from miles around.  Among city officials to arrive at the scene were Indianapolis Mayor Phillip L. Bayt Jr. and Marion County Prosecutor Frank H. Fairchild, as well as Indianapolis Fire Department Chief Roscoe A. McKinney, who oversaw the operations.

The media reports varied as to how many onlookers ultimately gathered at the scene, but it was clearly a very large crowd.  The number was reported as being between 5,000 and 8,000 people.  Five squads of police officers were required to keep them from getting too close to the fire.  The swarms of people made it difficult for fire department personnel to get some of their equipment to the fire.  The rush to the incident was also the cause of at least two automobile accidents. 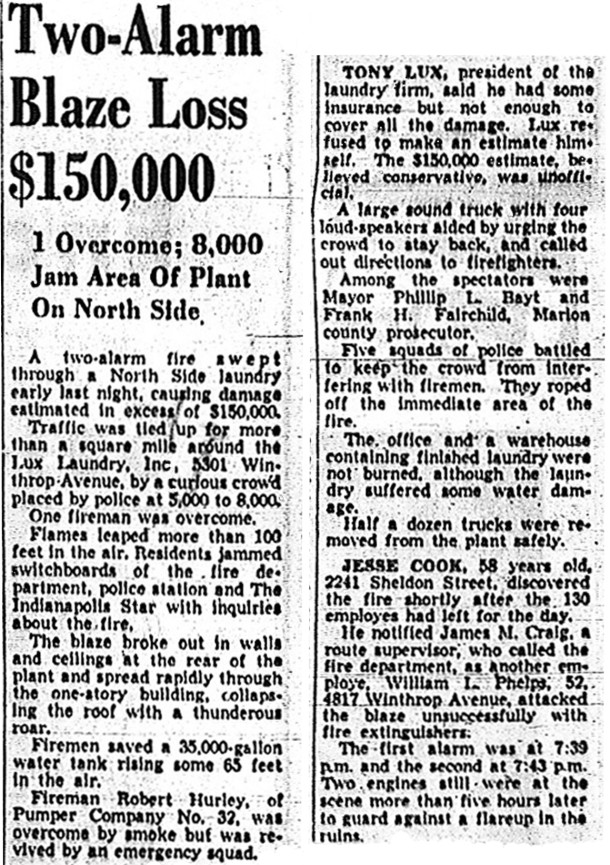 Thirteen pieces of apparatus were dispatched to the scene before the fire was under control, and it was midnight before the fire was completely out.  A one-story building measuring 125 feet by 200 feet was razed.  The roof, whch had been supported by wooden framework, collapsed completely.  Some of the brick or stone walls of the building remained, but equipment inside was melted and twisted, and 6,000 to 8,000 pounds of clothing were lost.  Only about 20% of the building was salvageable. 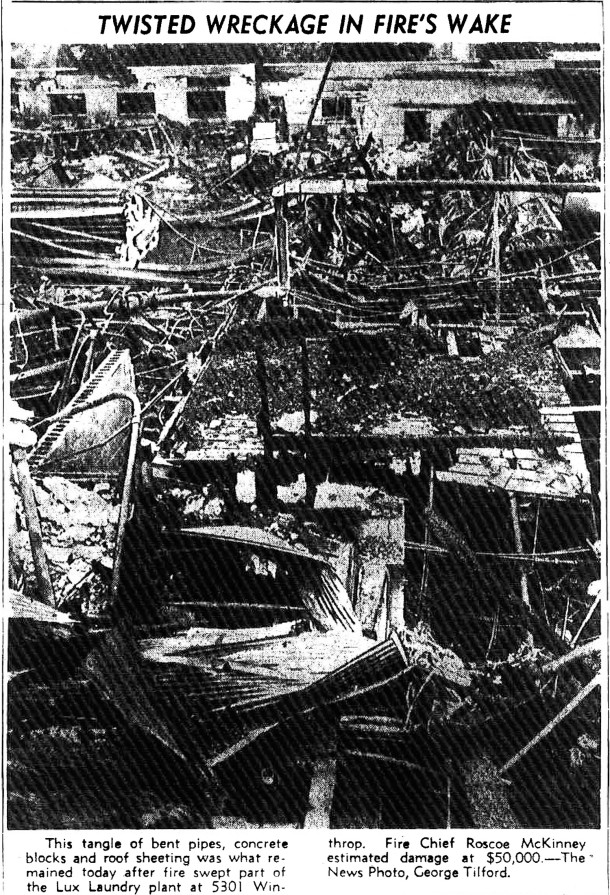 Photo in The Indianapolis News shows the devastation caused by the Lux Laundry fire.

The president of Lux Laundry, Tony Lux, lived only a few blocks away in the Forest Hills neighborhood.  He and his son, Thomas, vowed that despite the devastating loss of the building and most of its contents, the laundry would be open for business the next morning.  Fortunately, the company’s office and a room containing finished dry cleaning were not burned. 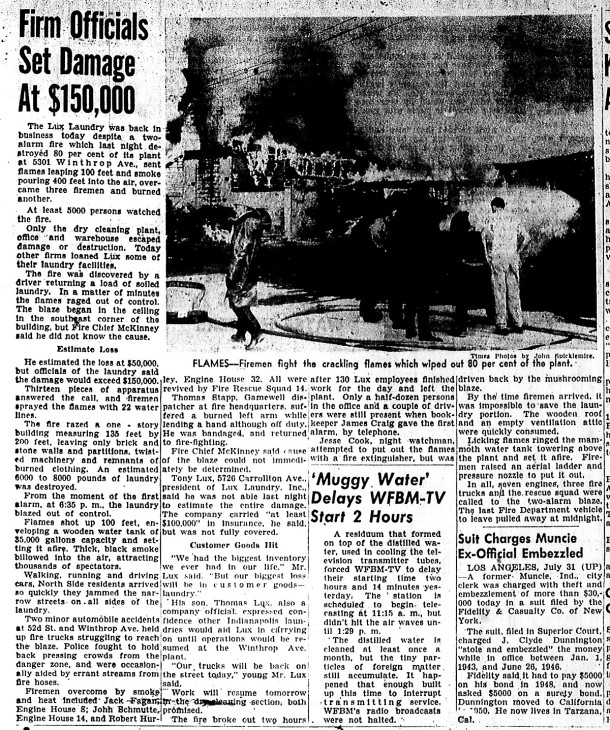 Antonis “Tony” Lux was born in Shelby County, Indiana, on September 29, 1883.  He was one of thirteen children born to John T. Lux and Elizabeth Mary Schaaf Lux.  By the end of the nineteenth century, the Luxes had moved up to Indianapolis to seek employment opportunities.  Several of Tony’s brothers first became bartenders, then went on to open their own establishments.  Soon after Tony became an adult, his older brother Frank and he became partners.  They operated Lux’s Bar at 117 West Washington Street. 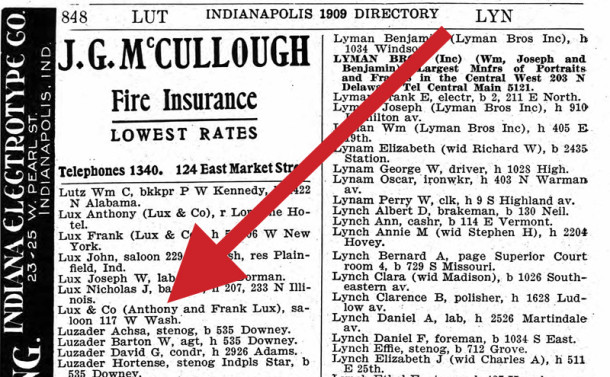 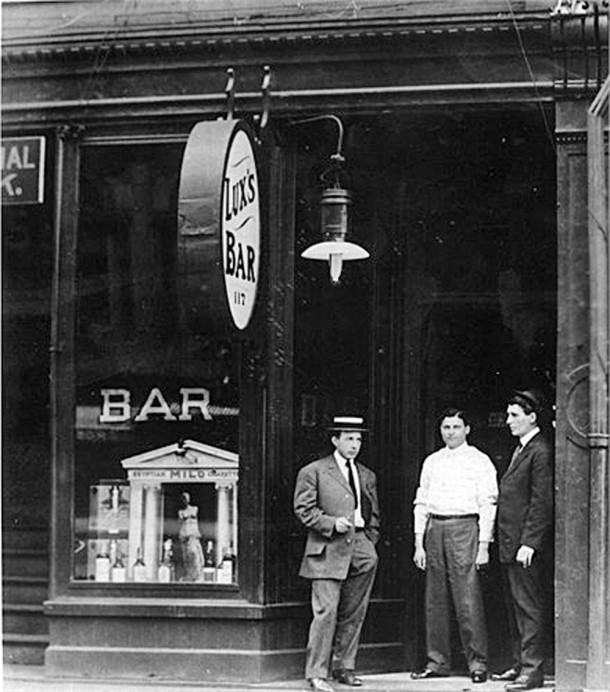 In the nineteen-teens, Tony operated the saloon by himself, and Lux’s Bar was renamed Tony Lux Bar.  Today that block of West Washington Street between Illinois Street and Capitol Avenue is the site of the PNC Center and the Hyatt Regency Hotel. 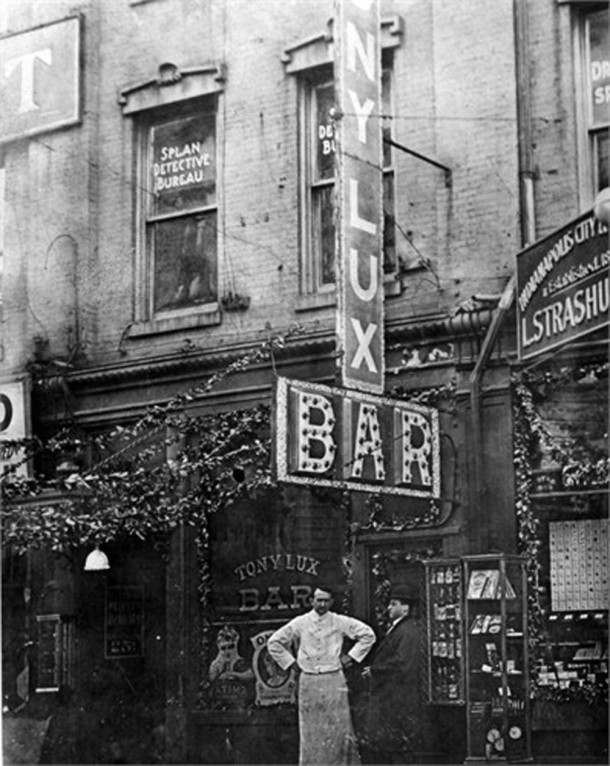 Tony Lux took over the operation of Lux’s Bar at 117 West Washington Street and renamed it the Tony Lux Bar (photo by Christopher Lux courtesy of ancestry.com)

On October 14, 1913, Tony Lux married Clara Louise Volz.  On February 5, 1920, the couple welcomed their only child, Thomas F. Lux, to the world.  Thomas would later join his father in the operation of Lux Laundry.

When Prohibition went into effect in 1920, Tony and his brothers had to find new lines of work.  Tony became the manager of the Joseph Haas Hog Remedy Company for a few years.  In 1928, he finally found his niche when he opened Lux Laundry.  The laundry would be his livelihood for the rest of his life.  Initially, Lux had partners named B. A. Barker and Elwood J. Leet.  Within a few years, Tony became the sole owner. 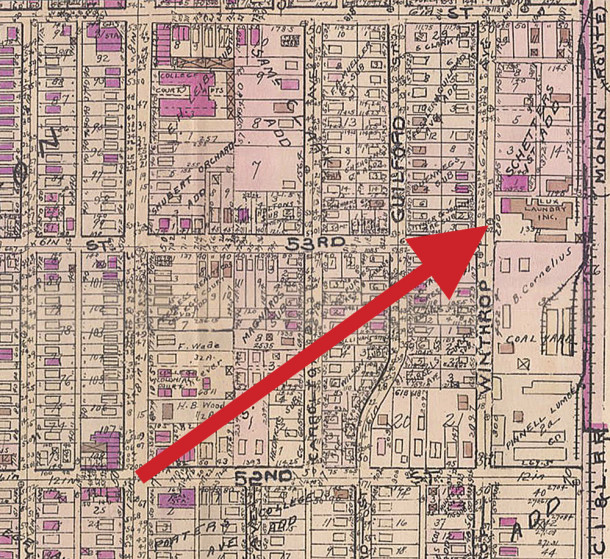 Tony Lux passed away on November 19, 1971.  He and wife Clara, who had preceded him in death in 1964, were both buried in St. Joseph Catholic Cemetery at 2446 South Meridian Street.  Son Thomas F. Lux Sr., who passed away just a few weeks ago, was recently laid to rest in St. Joseph’s, as well. 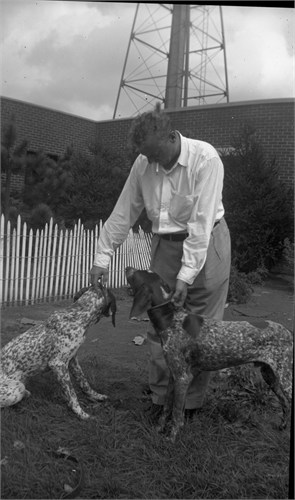 Tony Lux and his dogs outside the Lux Laundry facility   (photo by Christopher Lux courtesy of ancestry.com) 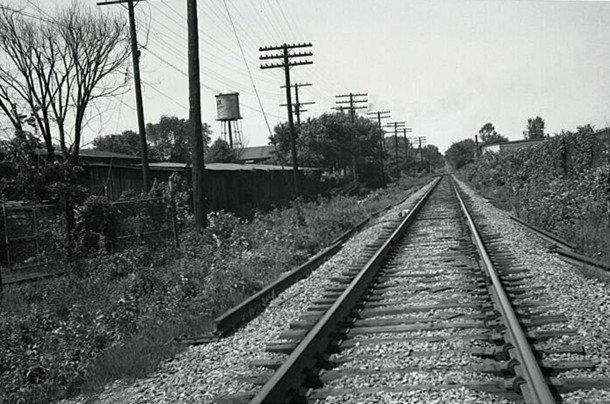 View of the Monon Railroad tracks and the Lux Laundry water tower, looking north from the 1000 block of East 52nd Street (photo: monon.org)

Historic Indianapolis could find no record of an official closing date for Lux Laundry, but by its absence from city directories, it would appear the laundry and dry cleaning service ceased operation around 1980.  Beginning that year, the building that had been home to Lux Laundry for half-a-century was occupied by Aratex Means Uniform & Career Apparel Rental Service. 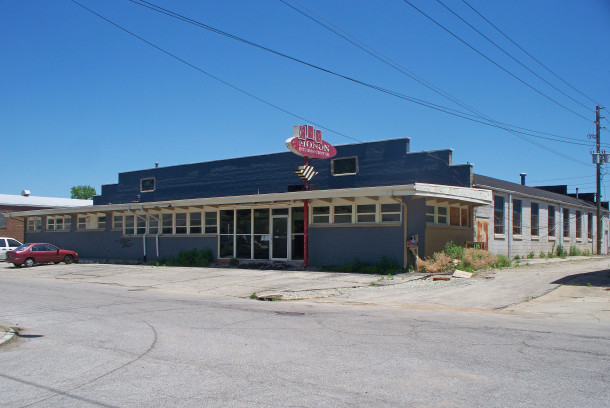 The site of the Lux Laundry Company for more than half-a-century at 5301 Winthrop Avenue as it appeared on June 6, 2014 (photo by Sharon Butsch Freeland)

From 2003 to 2007, the Monon Fitness Center operated in the building at 5301 Winthrop Avenue.  Since it closed, the building has sat vacant.  In 2012, a new establishment called Bent Rail Brewery & Coffee House was planned for the site.  Several announced opening dates have come and gone in the two intervening years.  Although Bent Rail has a Facebook page, a Twitter account, and a website, from the current condition of the building, it does not appear to be opening any time soon.