I recall that cyclist Marshall “Major” Taylor was born in Indianapolis.  Do you have any details about his early years?  ~ Caroline Cunningham, Los Angeles, California

Taylor was born in Indianapolis on Thursday, November 26, 1878, two days before Thanksgiving Day that year.  His parents were Gilbert and Sophronia (Kelter) Taylor, who had moved to Indiana from Kentucky after the Civil War.  In the 1878 Indianapolis city directory, the Taylors were listed as living at 40 Cora Street.  Neither their house nor the street it was on exists today.  The location of the Taylor residence was east of what is now 13th and Dr. Martin Luther King Jr. Streets, about where the off-ramp from southbound I-65 is located. In the years just after Major Taylor left Indianapolis, his parents and siblings lived at 2342 Northwestern Avenue (now called Dr. MLK Jr. Street).  Today the block in which the later Taylor home stood is the site of Watkins Park and Flanner House.

Gilbert Taylor, who was a Civil War veteran, worked as a coachman in the home of Albert Burley Southard and Laura (Brouse) Southard.  Southard was a superintendant of the Indianapolis Peru & Chicago Railroad (I P & C R R), which also owned the Chicago, Cincinnati & Louisville Railroad (C C & L R R).  Southard’s son, Dan Brouse Southard, was also born in 1878.  Marshall and Dan were reportedly good friends all of their lives, despite the racial barriers that existed in those times.

The Southards lived in a mansion at 827 North Meridian Street.  Marshall Taylor lived in their home from age 8 to age 12, where he was privately tutored and received the same privileges as the Southards’ son.  In 1890, the Southard family moved to Chicago.   Their departure from Indianapolis meant that at age 12, Marshall Taylor’s education and comfortable living arrangement ended.  He had to find a way to support himself.  The Southards had given Marshall a bicycle during the years he lived with the family.  He became an expert rider, which resulted in a local bike shop owner hiring him to perform stunts outside his bicycle shop.  Taylor performed these stunts wearing a soldier’s uniform, which resulted in his receiving the nickname of “Major.”

At the age of 13, Taylor won his first bike race.  At the age of 15, he beat the track record for a 1-mile race.  In 1895, he won his first significant race, a 75-mile road race from Indianapolis to Mathews, Indiana, in Grant County.  However, these had all been amateur events.  Once Taylor started breaking professional world track records, he was banned from bicycle racing in Indianapolis.  His white competitors at the Newby Oval and Capital City Track could not accept the idea of being beaten by a black cyclist.  In 1896, Taylor left his hometown and moved to Worcester, Massachusetts, where bike manufacturer Louis “Birdie” Munger became his employer, manager, and mentor. By 1898, Major Taylor held seven world records. He continued to win races in Canada and in Europe. 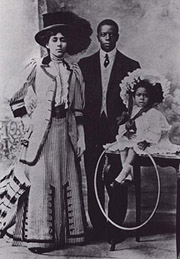 In 1902, Taylor married Daisy Morris in Ansonia, Connecticut, and she began to travel with Taylor to cycling events in other countries.  Despite the racism they encountered in the United States, they were received with enthusiasm and treated with respect in other countries.  While they were in Australia in 1904, the Taylors’ only child was born.  They named their daughter Rita Sydney Taylor, her middle name being in honor of the country in which she was born.

Major Taylor quit racing in 1910, at the age of 32.  In the late 1920s, estranged from his wife and daughter, he moved to Chicago.  In 1928, he used what was left of the fortune he’d made in cycling to self-publish his autobiography, The Fastest Bicycle Rider in the World, but The Great Depression was on, and few people were buying books. 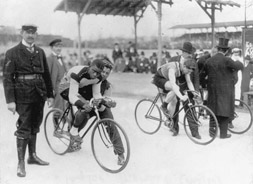 Major Taylor died in Chicago at the age of 53 on June 21, 1932, in the charity ward of the Cook County Hospital.  He was buried in an unmarked grave in the welfare section of the Mount Glenwood Cemetery.  In 1948, a group of former racers, using money donated by the Schwinn Bicycle Co., had his body exhumed and moved to a more prominent spot in the cemetery.

On his headstone is the following inscription, “World’s champion bicycle racer who came up the hard way without hatred in his heart, an honest, courageous, and God-fearing, clean-living, gentlemanly athlete. A credit to his race who always gave out his best. Gone but not forgotten.”

Marshall “Major” Taylor was posthumously inducted into the U.S. Bicycling Hall of Fame in 1989.  The Major Taylor Velodrome Park in Indianapolis is named for the Indianapolis native.  The 333.34 meter track was dedicated in 1982 and has played host to many competitions.  Several bicycle trails around the country are named in Taylor’s honor, as are a number of cycling clubs.  Taylor’s daughter Sydney Taylor Brown died in 2005 at the age of 101.  Although Major Taylor spent many of his adult years in Worcestor, Massachusetts, most of his living descendants now reside in Virginia.