On the northwest corner of North Meridian Street and Meridian Hills Boulevard, there is a wooded lot surrounded by a fence.  There were maybe two buildings on an aerial photo from 1962, but a 1971 aerial photo showed the land to be vacant.  I’d love to know who lived there and why the property remains vacant and fenced in to this day.  ~ Becki H., Indianapolis

Every day, thousands of cars pass through the intersection where Meridian Street, Meridian Hills Boulevard, and 71st Street come together.  The wooded property in the northwest quadrant of that corner has been an enigma to passersby for decades. 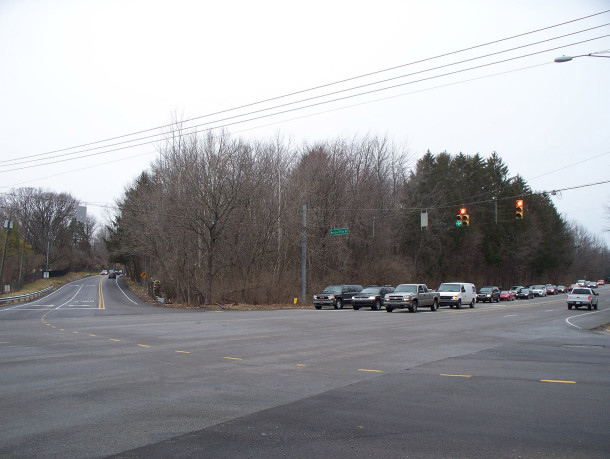 The land that’s bounded by Meridian Street, Meridian Hills Boulevard, and West 72nd Street consists of about 3.6 acres.  From an aerial view, the plot resembles a piece of pie.  The property is just north of the golf course at the Meridian Hills Country Club.  At some point, the acreage was divided into nine separate parcels of approximately one-third of an acre each, suggesting that at one time someone had intended to develop this site into residential building lots. 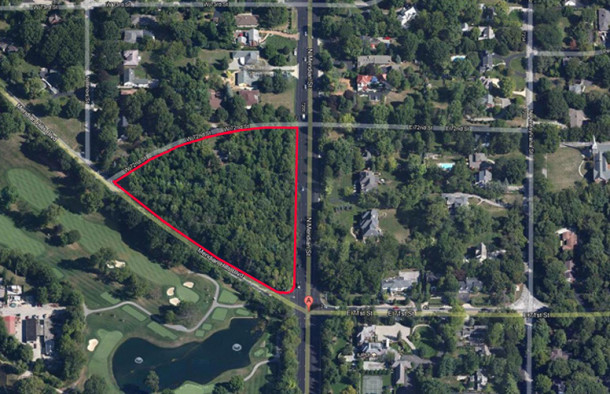 From an aerial view, the acreage bounded by Meridian Hills Boulevard, Meridian St., and 72nd St. resembles a piece of pie   (map courtesy of bing)

My repeated attempts to contact the owner of the property over the past several weeks have not been successful.  I had hoped to confirm the information I’d found on my own, as well as obtain additional details on the history of the site and any plans being contemplated for its future.  Failing any first-hand accounts, I will tell you what I know. 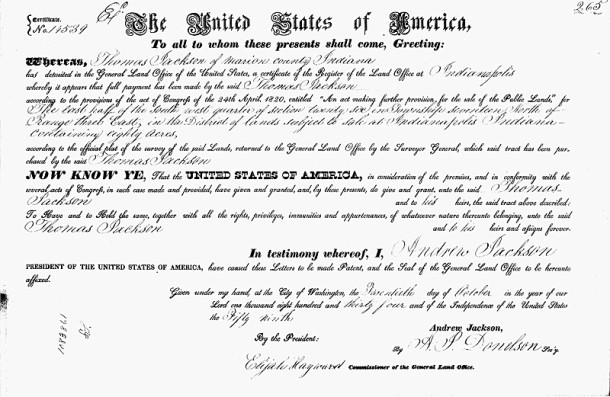 1834 Land Patent shows the purchase by Thomas Jackson from the U.S. of A.  (Ancestry.com)

Because there are few records available for the areas of Marion County that were outside the city limits of Indianapolis until more recent times, I am not able to report who owned the property between 1889 and the 1930s.  I can, however, provide information on the owners for the last three-quarters of a century, as members of the same family have continuously owned the property since then. 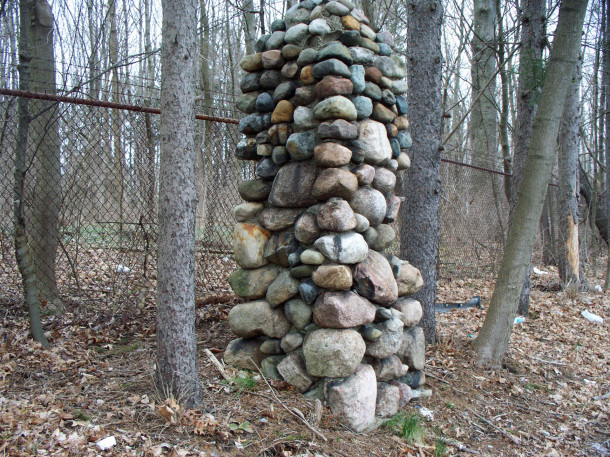 Fieldstone pillars are spaced at regular intervals around the perimeter of the property at Meridian and Meridian Hills Blvd.   (2013 photo by Sharon Butsch Freeland)

By the time of the 1940 Census, a residence on the property was the home of three of the four adult children of Lafayette Andrew Jackson (1863-1931), the founder of the Standard Grocery Store chain.  The residents included Jackson’s daughter Charlotte and her husband, Carl Baldwin, and Jackson’s sons, Chester and Howard.  I feel certain the home was already built, when the Jackson family moved there in the 1930s, but at this time I do not know who built it. 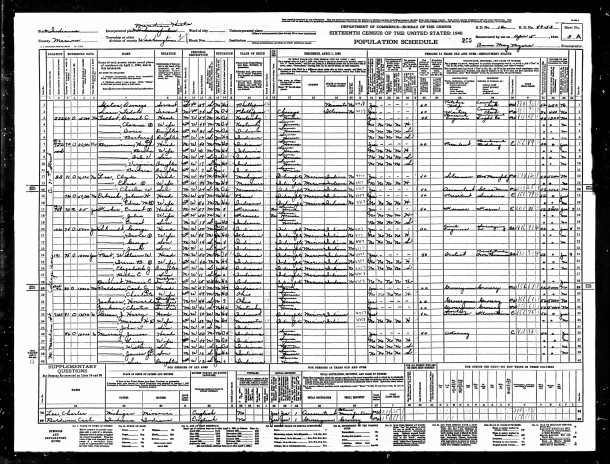 On the 1940 Census, three of Lafayette Jackson’s children lived on the property at Meridian Street and Meridian Hills Boulevard (image courtesy of Ancestry.com)

L. A. Jackson owned 226 grocery stores at the time he was killed by gunfire in a robbery attempt at the main Standard Grocery Store office at 419 E. Washington Street.  Lafayette’s children carried on the operation of the chain after his untimely demise at the age of 68.  Older son Chester became president of Standard Grocery in 1931.  He married Marguerite “Marjorie” O’Connell in 1952.  The couple built their own home a few blocks away, on a large corner lot at 6490 Spring Mill Road.  In 1977, Chester Jackson’s eccentric widow, Marjorie Jackson, also lost her life in a highly publicized robbery, murder, and house fire.

Carl and Charlotte (Jackson) Baldwin continued to live in the property until their deaths in 1951 and 1959, respectively.  Indianapolis city directories in the early 1960s listed “No Return” for 7102 N. Meridian Street, so the home may have been vacant or tenant-occupied for a time.  Around 1962 or 1963, there was a fire on the property, presumably at the house in which the Jackson siblings had all formerly resided together.  I searched newspapers of the period, but I was not able to find any information about the fire. 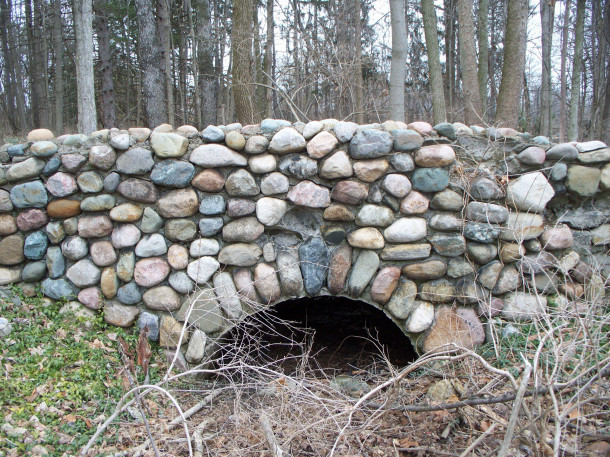 The property was then deeded to Charlotte Baldwin’s nephew (and Lafayette A. Jackson’s grandson), Edward J. Wiest.  Edward’s father, Edward H. Wiest, was the husband of Lafayette Jackson’s fourth child, daughter Marguerite.  Upon the death of the younger Edward Wiest, the property was then deeded to his sister, Elizabeth (Wiest) Johnson (Mrs. Sylvester Johnson III).  She is the chairperson of the annual Traders Point Hunt Charity Horse Show.  In recent years, Mrs. Johnson has turned the property over to her son, John Johnson, who owns the Meridian Hills properties under the name Eagle Standard LLC.

As I could not reach the Johnsons, I do not know what their future plans for the property might be, if any.  My sense is that they merely wish to keep the property in the family and maintain the land in as natural a state as possible for such a prominent corner.  I’m sure the wildlife in the area enjoy having a haven on one of the main streets of the city.