Back in the Fifties and Sixties, my family sometimes dined at a Chinese restaurant called the Mandarin Inn, which was as well-known for its steaks as it was for its Chinese food.  There were also several other popular Chinese restaurants on the north side of Indianapolis at that time, including Lotus Garden and Jong Mea.  Can you provide any information about these establishments?  ~  Ralph Drybrough, Tucson, Arizona

Most people who lived on the north side of Indianapolis in the second half of the 20th century were familiar with one or more (usually more!) of the Chinese restaurants in the area.  There were not as many options for dining out in those days as there are now, so the Indianapolis eateries that did exist enjoyed considerable popularity.  They were family-owned businesses, typically employing multiple generations of the same clan, as well as their extended relations and friends of the families.  In addition to dine-in facilities, the Chinese restaurants were famous for their take-out service, long before restaurants with other kinds of cuisines got on board with carry-out.

The Mandarin Inn was located in the Ma-Co Building on the southeast corner of E. 38th Street and N. College Avenue.  The original name of 38th Street was Maple Road, so the Art Deco building got its name from the first two letters of the intersecting streets, Maple and College.  The Ma-Co Building was the subject of a “Then and Now” article by Joan Hostetler back in 2011, which you can read by clicking here. 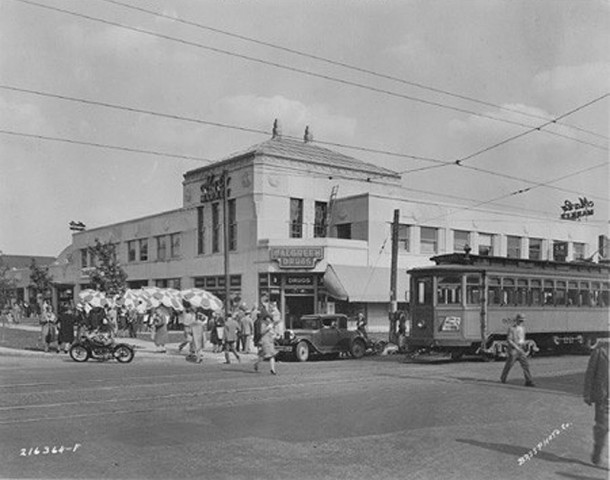 The Mandarin Inn was located at 3775 North College Avenue in the Art Deco Ma-Co Building, which was completed in 1930   (W. H. Bass Photo Company Collection courtesy of the Indiana Historical Society)               CLICK TO ENLARGE

A review of the Mandarin Inn appeared in The Indianapolis Times on February 27, 1960   CLICK TO ENLARGE

The elder Cheungs had previously operated a restaurant in the Stone Hotel, whose address was listed in Indianapolis city directories of the 1950s as being at 237 South McCrea Street.  That address does not exist today, but it appears to have been located in the building now known as One Jackson Square.  The current tenant on the first floor,  where the Cheungs’ previous restaurant was located, is Ike & Jonesy’s.  The Stone Hotel was originally called Hotel Spink, when it was built in 1924.

The Mandarin Inn claimed to be the oldest Chinese restaurant in an Indianapolis Star ad published July 5, 1981        CLICK TO ENLARGE

The Mandarin Inn ceased operation in the late 1980s.  The Ma-Co Building was demolished in about 1992, despite protests by people in the Mapleton-Fall Creek and Meridian-Kessler neighborhoods.  The unique building was replaced by a typical, modern-day, freestanding Walgreens store.  Coincidentally (or perhaps ironically), the Ma-Co Building’s primary tenant when it first opened back in 1930 had been Walgreen Drugs. 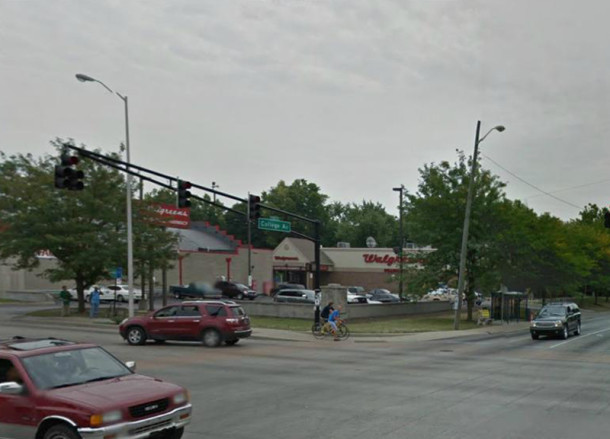 Walgreen Drugs was one of the first tenants in the 1930 Ma-Co Building, and that corner now has a free-standing Walgreens (image courtesy of Google maps)

Another popular Chinese restaurant that appeared mid-century was the Lotus Garden, which was located in the Town & Country Shopping Center.  The restaurant had an address of 4424 Allisonville Road, but most people accessed it through the parking lot from the 4400 block of North Keystone Avenue.  The land on which the shopping center was built was formerly owned by the Hammond family, whose Hammond’s Grove, a park that was adjacent to Fall Creek, was the subject of a previous HI Mailbag column in March. 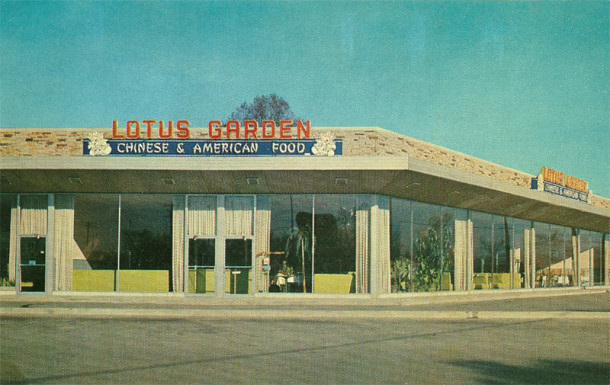 The original Lotus Garden was located at 4424 Allisonville Road, on the east end of the Town & Country Shopping Center    (photo courtesy of Evan Finch)

The Lotus Garden opened in 1953.  It was originally owned by Lee Chow Yee, Daniel M. Lee, and William Taw.  Daniel Lee had been the manager of the Mandarin Inn in the years just prior to striking out on his own.  Yee’s son Hauk Yee and Daniel’s son Lum Lee were also involved.  In later years, William Taw, Jr., assumed management of the Lotus Garden.  A second and third location of Lotus Garden were opened in Greenwood and in Carmel.  The Greenwood restaurant is the only one that is still in operation today, but the original families are no longer involved in the business. 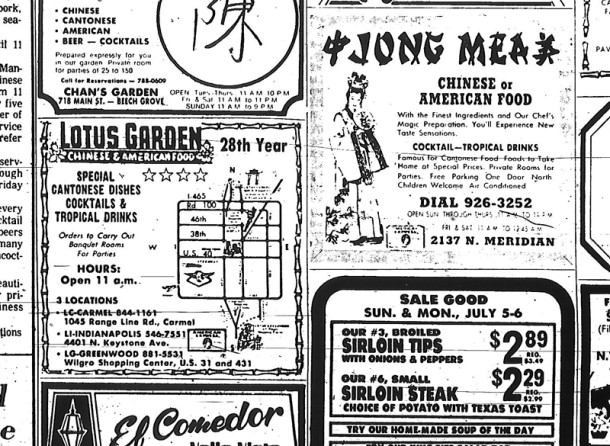 The original Lotus Garden in the Town & Country Shopping Center closed about 1999.  Other businesses have occupied that site since the Lotus Garden left, but the building is currently vacant. 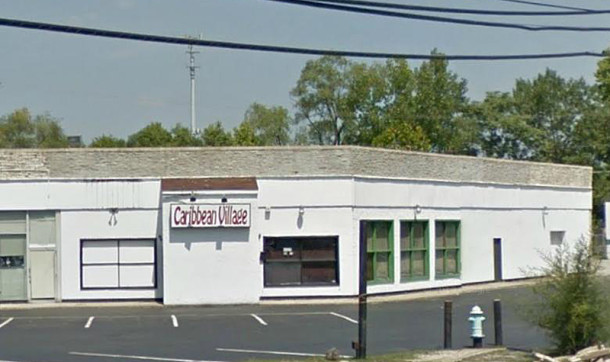 The building in which the original Lotus Garden restaurant was located is still standing, although it is presently vacant    (image courtesy of Google maps)

Jong Mea was located at 2137 N. Meridian Street.  Its founder and first president was Irving Chin.  Later generations of the Chin family, including Hank Chin, Susan Chin, and Edward K. Chin were involved in the restaurant’s operations. 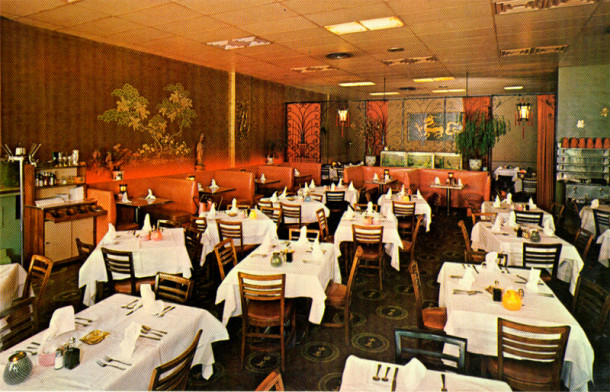 Interior of the Jong Mea Chinatown Restaurant, as it appeared in the 1970s         (photo courtesy of Evan Finch) 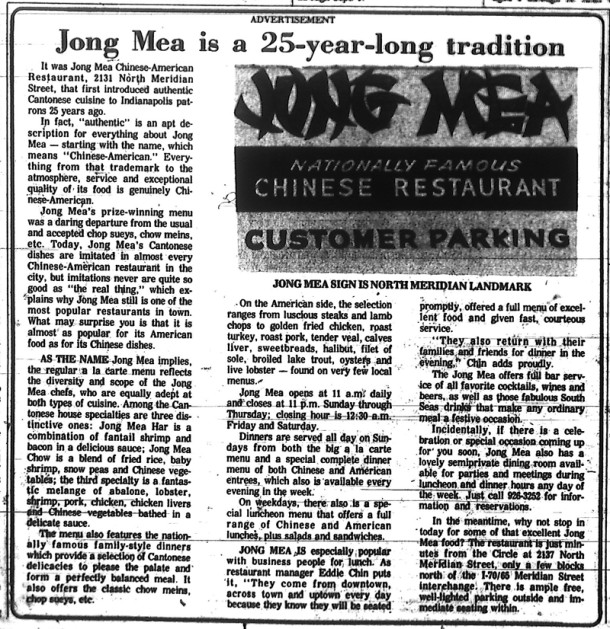 When she was young, Lani Chin’s parents told her that “Jong Mea” meant “Chinese American,” but she says she later learned that it can roughly be translated as “Midwest.”  In either case, the name fit.  Lani Chin also reports that the Indianapolis location of Jong Mea closed in 1998. 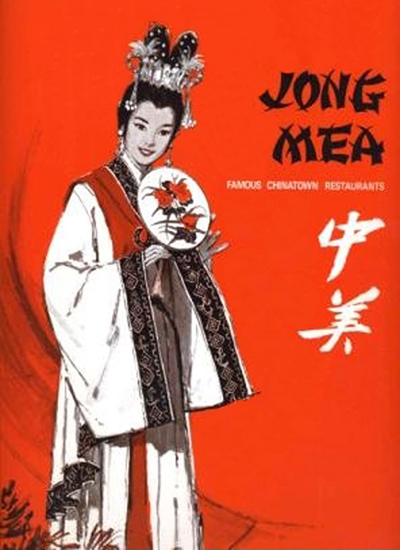 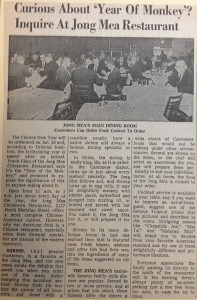 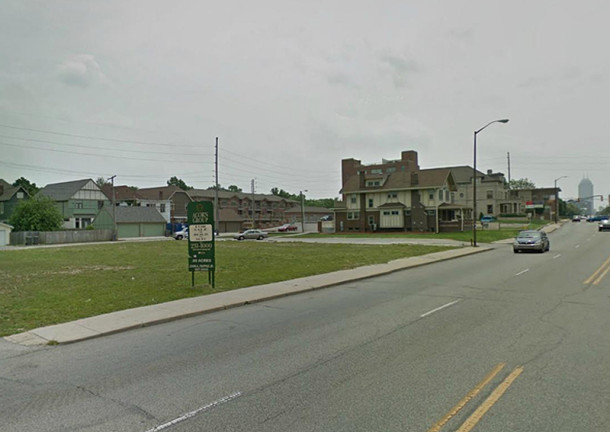 If any readers have memories of the Mandarin Inn, Lotus Garden, Jong Mea Chinatown Restaurant, or other northside Chinese Restaurants you’d like to share, please comment below this article.  If anyone has photos of these establishments or any memorabilia such as menus, coasters, or matchbooks, HistoricIndianapolis.com would appreciate having copies or scans of them.