I’m interested in knowing what the building used to be that is located on the northwest corner of Illinois and 34th Streets.  I look forward to seeing what you discover. Thank you. ~ Mark M., Indianapolis

The seemingly single structure on the northwest corner of North Illinois and West 34th Streets actually consists of four separate buildings.  Roofing and siding materials added to three of the original buildings conceal their original identities.  The buildings that are closest to the intersection were constructed a decade earlier than the building that is the farthest away from it.  Some details on each of the properties will be provided below. 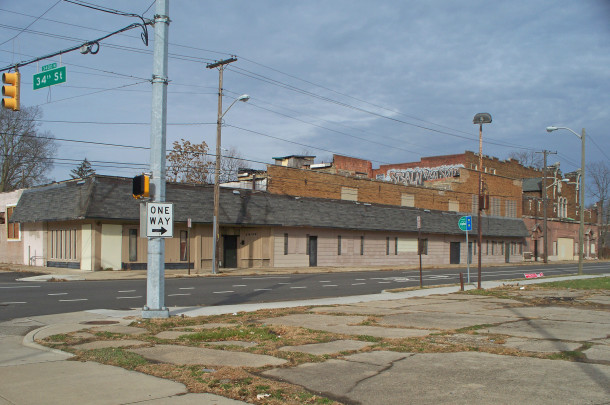 The first three lots north of the corner were unimproved tracts of land at the time of the 1916 Baist Atlas map (see below).  A frame single-family home stood on the fourth lot north of the corner.  All of the lots were owned by a widow named Lena Bergdall Weghorst (1859-1954).  Lena also owned the first four lots in the 3400 block of Kenwood Avenue, immediately west of the subject properties.  After selling her home at 3432 N. Illinois Street, Mrs. Weghorst moved to a new home at 3437 N. Kenwood Avenue.  She lived to the age of 95. 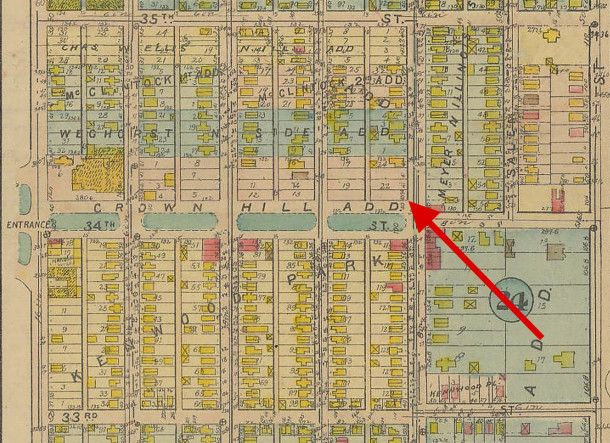 An interesting original feature of the neighborhood was the existence of esplanades down the middle of West 34th Street, from Illinois Street on the east to Boulevard Place on the west.  When traveling west of Meridian Street on 34th Street, the esplanades were straight ahead at the intersection of 34th with Illinois Street.  The existence of the esplanades necessitated a little jog at the corner, in order to drive around them.  West 34th Street led to one of the lovely gated entrances to Crown Hill Cemetery.

It may be of note that the legal description of the land on which the subject buildings on Illinois Street were erected is called “Crown Hill Addition.”  If the cemetery at one time owned this land, they may have installed the green spaces to enhance the approach to the cemetery’s entrance.  The green spaces down the middle of the street must have been a lovely addition to the area for residents, shoppers, workers, and visitors.  The esplanades are long gone, and the oddly configured, irregular corner and wide street look a little off-kilter now.

The first building to be constructed on the northwest corner of 34th and Illinois was the one-story building that is the furthest south.  At the time the building at 3402 North Illinois Street was built, it was literally on the corner of the block, just a few steps from the curb and the street.  The reason the building is a number of feet north of what is now the corner of that intersection is that the parking lot south of the building was originally the westbound lane of West 34th Street, on the north side of the now-extinct esplanades.  When the esplanades were taken out, the lane on the north sides of the esplanades became additional land for the lots north of the former street.

I could not find an official record of the building’s construction.  However, an ad in which a drugstore was listed at 3404 N. Illinois Street appeared in The Indianapolis Star in November of 1917, so the building had to have existed by 1917.

An ad in the November 22, 1917 Indianapolis Star included a drugstore at 34th & Illinois Streets     CLICK AD TO ENLARGE

The first Indianapolis City Directory in which there were any business listings in the 3400 block of North Illinois Street was not until 1918, so the commercial corner must have been completed late in 1917, after the 1917 city directory had already been completed.  The three businesses that were open by the tme of the 1918 directory included a dry goods store at 3402, a drugstore at 3404, and a garage at 3408. 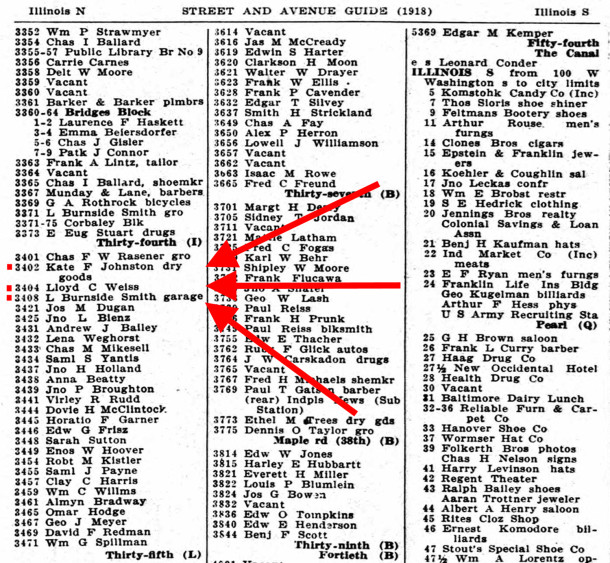 One of the first businesses to operate in the new building was a drugstore operated by Lloyd C. Weiss.  In August of 1918, Weiss suffered serious injuries when a soda tank exploded while he was recharging it.  Although the article said that his injuries were probably fatal, it appears Weiss survived the explosion.  Crown Hill Cemetery records indicate he wasn’t buried there until 1944. 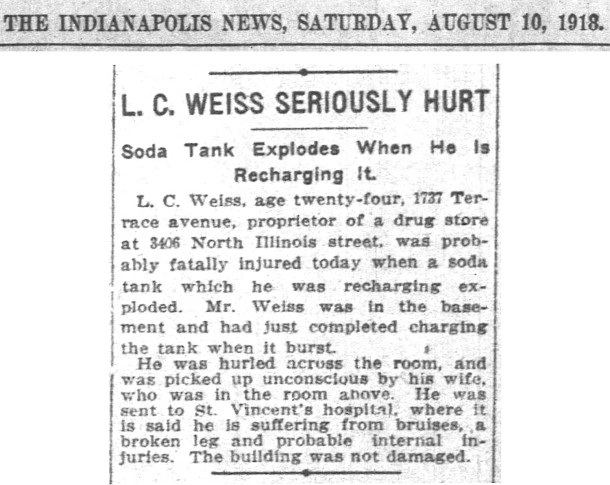 The third business to open late in 1917 or early in 1918 was a garage operated by L. Burnside Smith.  The building in which the auto repair shop operated is a two-story edifice.

The final building to be erected in the string of storefronts at 34th and Illinois was the Ritz Theatre.  It opened on the evening of February 22, 1927, amidst great hoopla.  The Ritz Theatre was the subject of a more in-depth 2012 “Indianapolis Then and Now” article by Joan Hostetler, which you can read by clicking here. 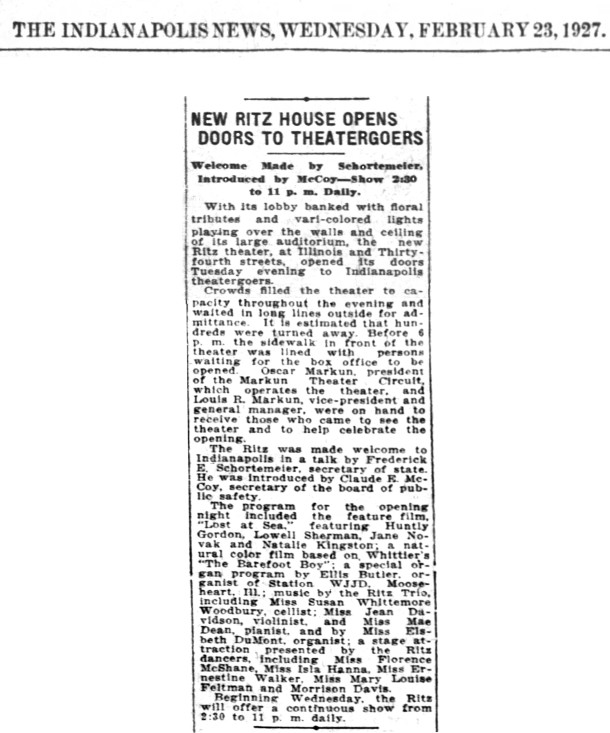 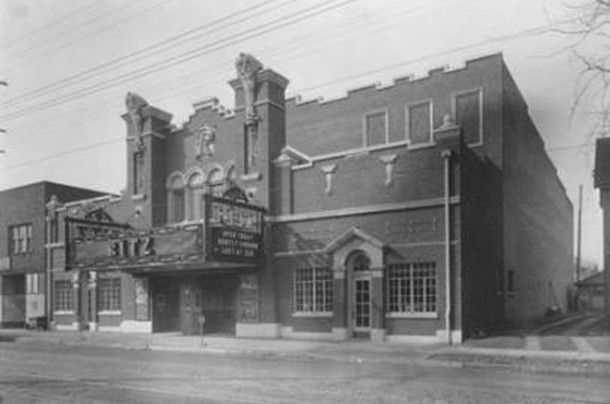 The Ritz Theatre at 3430 North Illinois Street, as it appeared soon after it opened its doors on February 22, 1927       (1927 W. H. Bass Photo Company Collection, courtesy of the Indiana Historical Society) 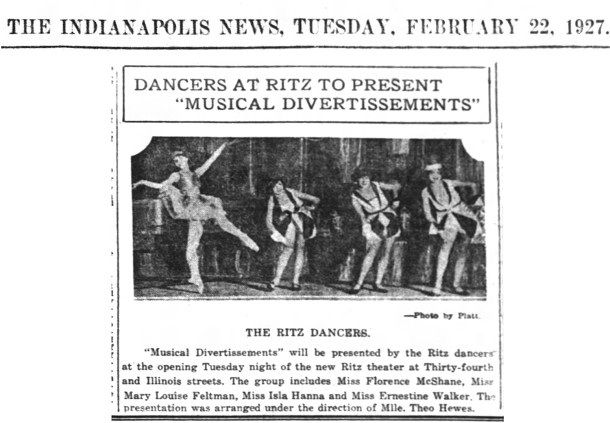 The 1927 Baist Atlas map shows the buildings in the 3400 block that existed by that year.  All are still standing today, although the condition of the structures is questionable. 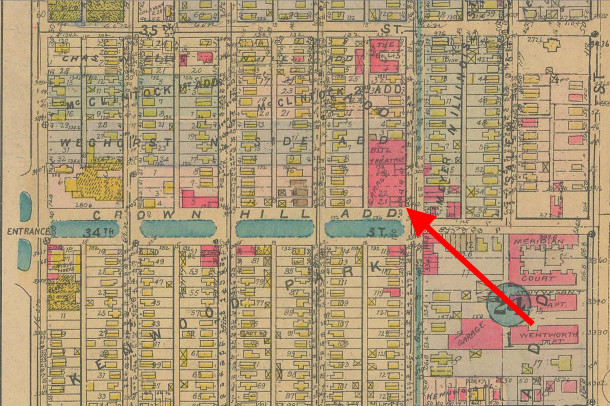 Until the late 1950’s, the corner of 34th and Illinois was a thriving commercial node.  Over the years, the first storefront operated as a dress shop, a beauty salon, and a restaurant.  The second storefront housed a drugstore in its early years, an A & P Grocery Store in the ’30s, a barber shop, and the Topper Tavern in later years.  The second entrance north of the corner was a garage in its early years and became the body shop for Ogle Buick in later years. 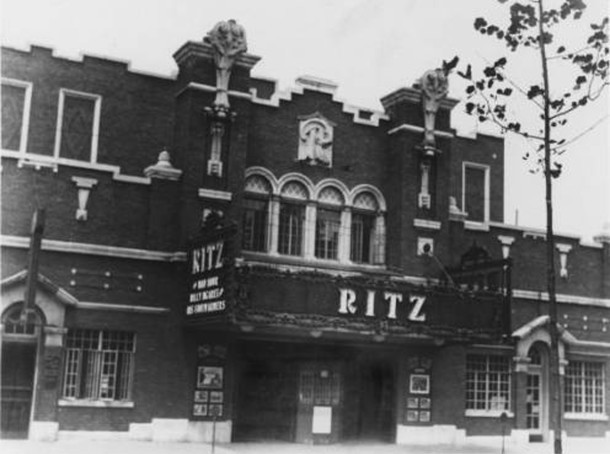 The northernmost building in the row of businesses — and the most interesting of the three edifices architecturally — was a popular movie house for three decades.  When the building began to age and attendance dropped off in the late Fifties, the theatre ceased to show first-run movies.  The Ritz briefly became a burlesque club and closed its doors early in 1962, after which time it was vacant for the next several years.

In the summer of 1970, four enterprising young men — John Connely, Jim McSweeney, Timothy Quinn, and Al Cerulli — reopened the Ritz as a live rock concert venue.  The name they gave it, Middlearth, was supposedly a nod to J. R. R. Tolkien’s Middle-earth in The Hobbit and The Lord of the Rings.  However, if it was meant to refer to Tolkien’s Middle-earth, the young entrepreneurs’ spelling was not true to Tolkien’s. 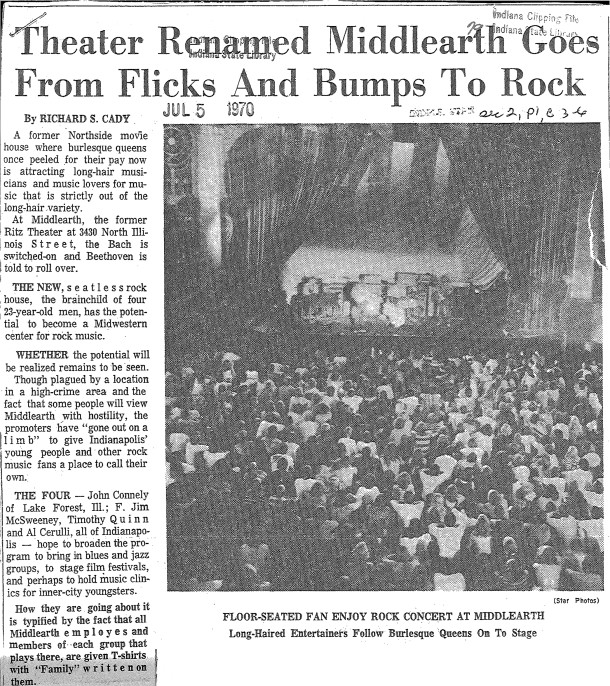 After being shuttered for several years, the Ritz Theatre reopened in 1970 as a live music venue called Middlearth      ( Indiana State Library)     CLICK ON CLIPPING TO ENLARGE 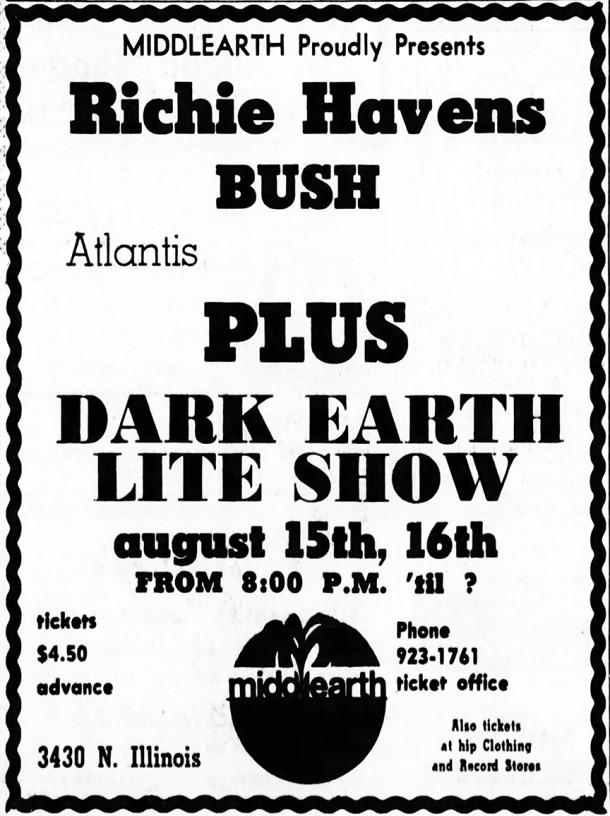 In January of 1972, two new promoters named Chris Hilt and James Greeley attempted to revive the building yet again, taking back the building’s original name of the Ritz Thedatre. Once more, the venue’s run was short-lived, and it closed by year’s end.  The only groups I’ve been able to confirm as having played the Ritz are Joy of Cooking and Leo Kottke on January 14, 1972, and John McLaughlin and the Mahavishnu Orchestra on April 25th and on July 22nd of 1972. 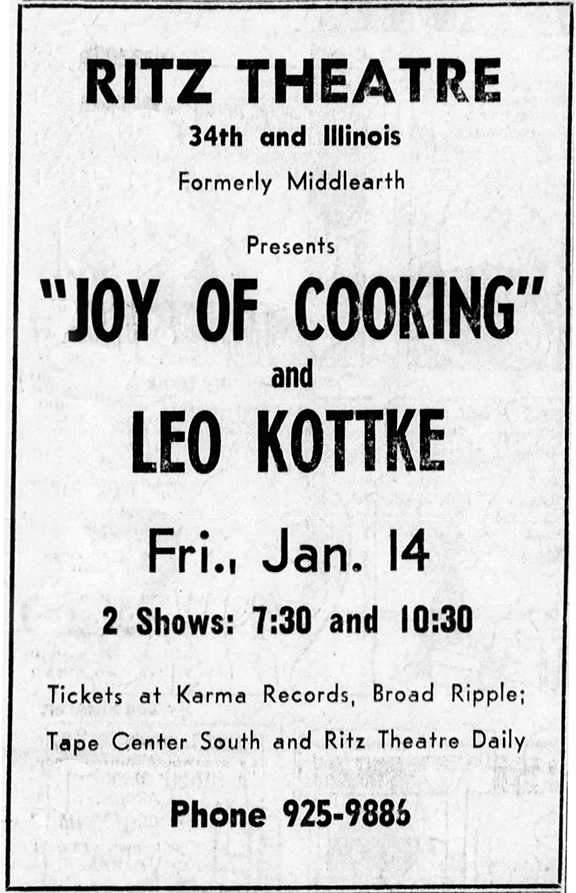 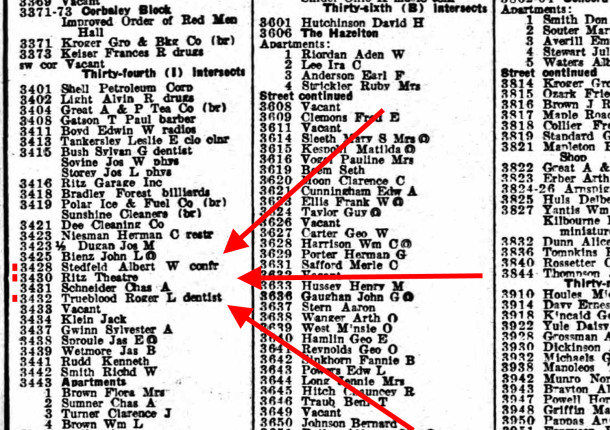 Sadly, all of the buildings on the northwest corner of 34th and Illinois have stood vacant for many years.  The brickwork is deteriorating.  The windows are boarded up or bricked in.  Several exterior walls have been graffitied.  The marquee that once loomed over the entrance to the theatre’s lobby has been removed.  The enclosed area behind the former garage structure is full of junk cars and vehicle parts.  An aerial view of the site suggests that the roofs may not be sound. 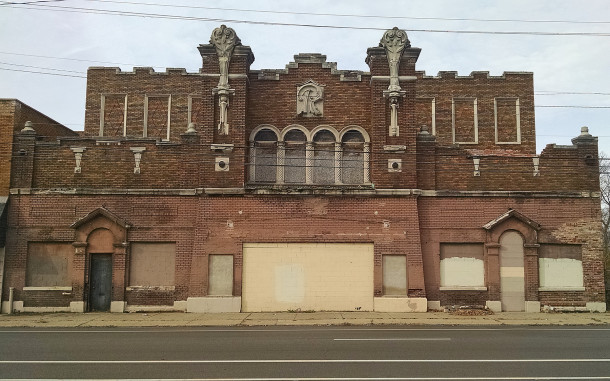 Completed in 1927, the Ritz Theatre has stood vacant for a number of years now and begs to be restored and re-purposed         (2014 photo by Sharon Butsch Freeland) 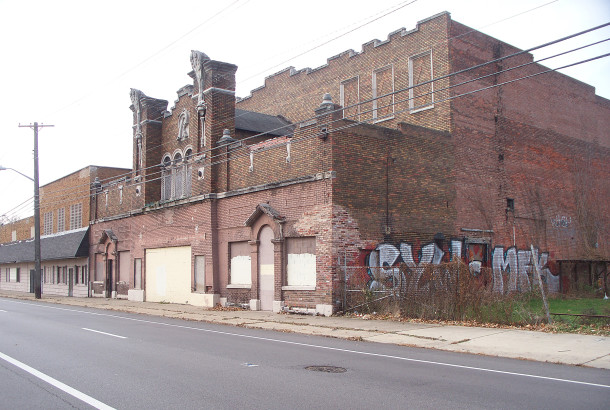 With all the great things that are happening in Midtown Indianapolis these days, it’s a shame that these formerly popular buildings have not been maintained.  Located within the boundaries of the United Northwest Area (UNWA), the northwest corner of 34th and Illinois is within a few blocks of many historic Indianapolis treasures, including the Children’s Museum of Indianapolis, Indianapolis Museum of Art, Shortridge High School, Butler University, and Crown Hill Cemetery.  One can only hope that these properties’ owners will decide to repair the buildings and put them back in use or turn them over to others who will.

If Historic Indianapolis readers have memories of the businesses that formerly operated in these now vacant structures, they are encouraged to leave comments below.