I recall having come across a photo of a mansion on either Meridian or Pennsylvania Street that belonged to a member of the Jameson or Tarkington family.  If you are familiar with the house, can you share its story?  What happened to it? Thanks!  ~ Theresa, Indianapolis

The mansion to which you refer was located on North Pennsylvania Street.  The house had several different addresses during its 101 years of existence, as a result of the City’s periodical updating of its numbering system.  The final address by which the home was known was 1035 North Pennsylvania Street.  The property belonged to members of both the Jameson and Tarkington families, as well as to two other prominent citizens before them.

The residence was a brick, three-story, Colonial Virginia style residence.  The front of the building had a pediment atop two large Ionic columns and a covered entry supported by six smaller pillars.  Inside the front door, a wide center hall extended from the front of the home to the back of the home, a distance reported to have been about seventy-five feet in length. The ceilings of the rooms on the main level were eighteen feet high. 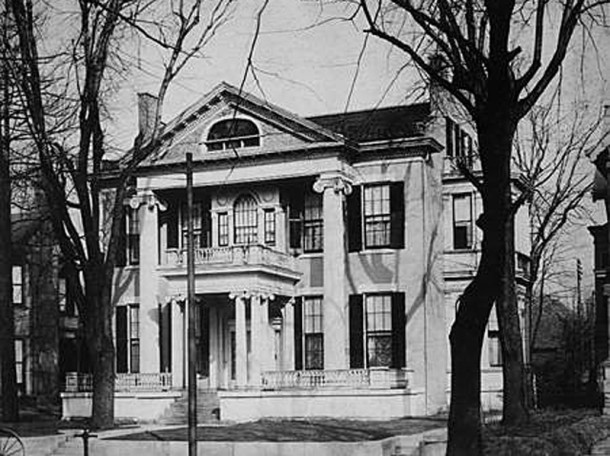 The residence began its storied existence in 1854, when the original portion of the house was built by Methodist Episcopal Bishop Edward Raymond Ames (1806-1879).  The land on which Ames erected the home had originally been purchased from the federal government in 1822 by Samuel Q. Booker, but it had remained unimproved until Bishop Ames acquired the land.  The property was located outside the city limits when Ames constructed his home.  At that time, Indianapolis’s corporation line was at what was then called First Street and is today called 10th Street.  Ames was known as the “Statesman Bishop” for his involvement in Indiana politics, and he often opened his home for State functions. 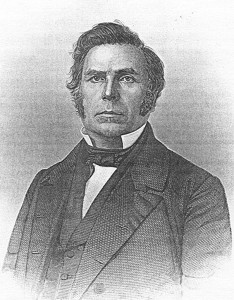 Methodist Bishop Edward Raymond Ames built the home that would later be known as the Ovid Butler Jameson House  (image from “A History of Athens County, Ohio” by Charles M. Walker) 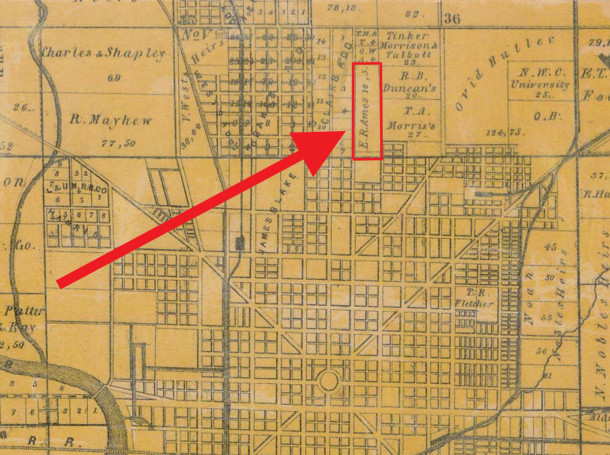 Within a decade of building the house, Bishop Ames was called to Baltimore, Maryland, for another post.  In 1863, he sold the property to Judge Addison Locke Roache Sr. (1817-1906).  Roache was a native of Tennessee who had come north to Bloomington in 1838 to attend Indiana University.  Roache married a Parke County native named Emily Wedding in 1842 and decided to make Indiana his permanent home.  He was admitted to the bar in 1845, elected to the Indiana House of Representatives in 1847, and was tapped as a Justice of the Supreme Court in 1853.  In 1854, he became President of the Indiana & Illinois Central Railroad (I&ICRR) and gave up his seat on the bench.  The house on Pennsylvania Street was the Roache family’s home for nearly four decades, the longest of any of its residents. 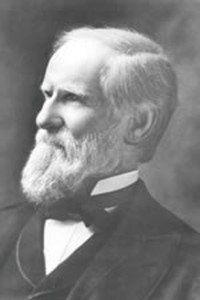 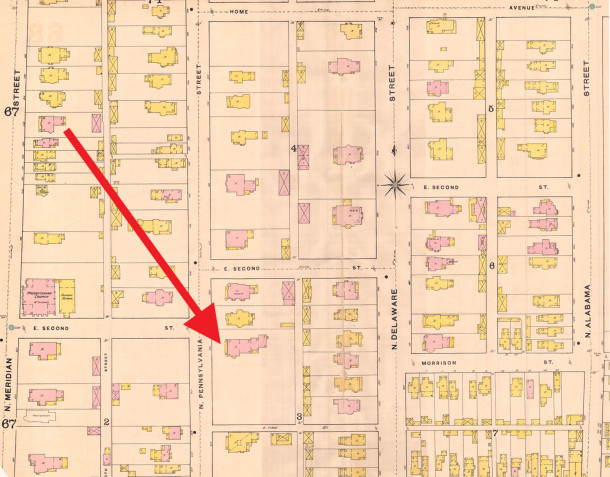 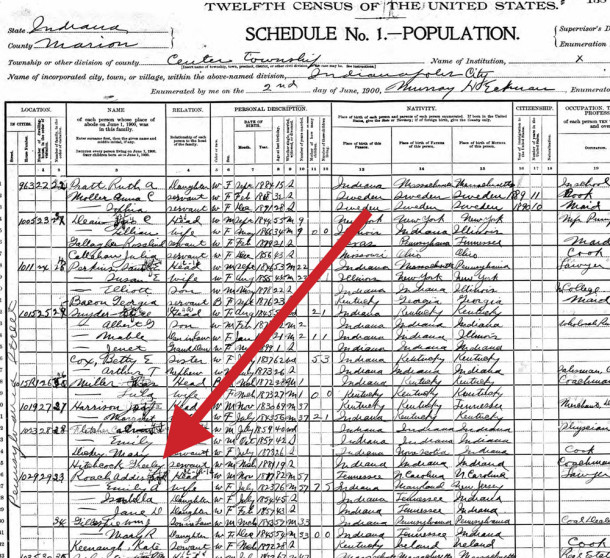 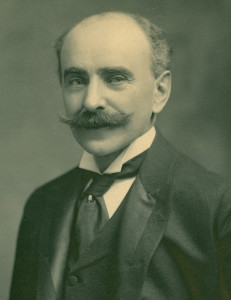 Mrs. Ovid Butler Jameson was Mary Booth Tarkington Jameson (1858-1937), the daughter of John Stevenson Tarkington and Elizabeth Booth Tarkington.  She received her nickname of Hauté from her maternal grandfather as a nod to her mother’s Vigo County birthplace of Terre Haute.  Hauté was the older sister of novelist and dramatist Newton Booth Tarkington (1869-1946).  She adored her younger brother and remained close to him all her life, serving at times as his unofficial agent and public relations consultant.  The Tarkington family’s residence at 1100 North Pennsylvania Street was diagonally across the street from the Jameson House, on the northwest corner of 11th and Pennsylvania Streets. 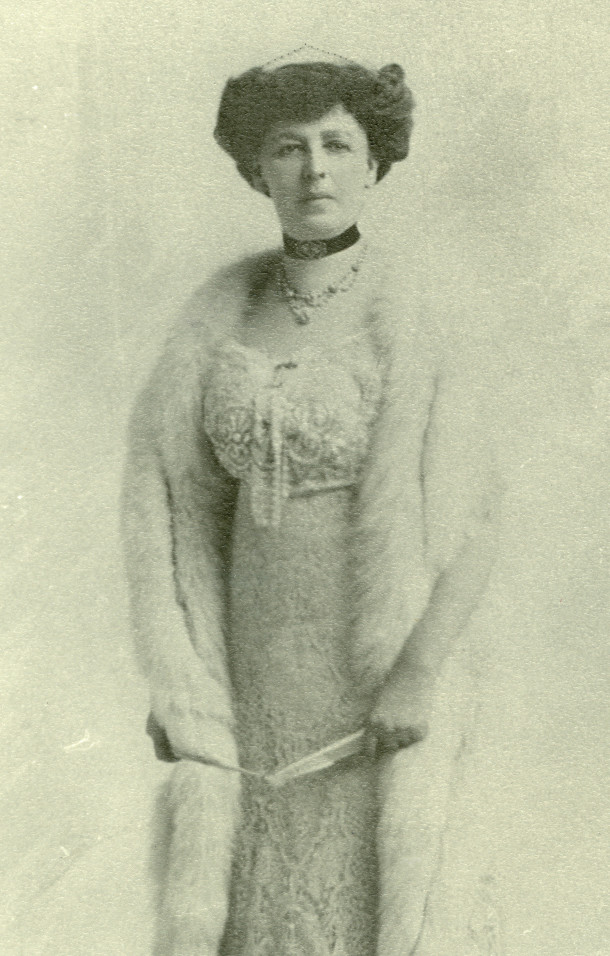 Although already historic by the time the Jamesons purchased the nearly half-century-old home, it was the Jamesons’ stewardship of the residence that made it famous.  Christened “Barley Bright” by family friend James Whitcomb Riley — who may have been a beau of Mrs. Jameson when they were younger — the moniker was apparently related to Hauté’s liberal use of the colors yellow and gold throughout the home. 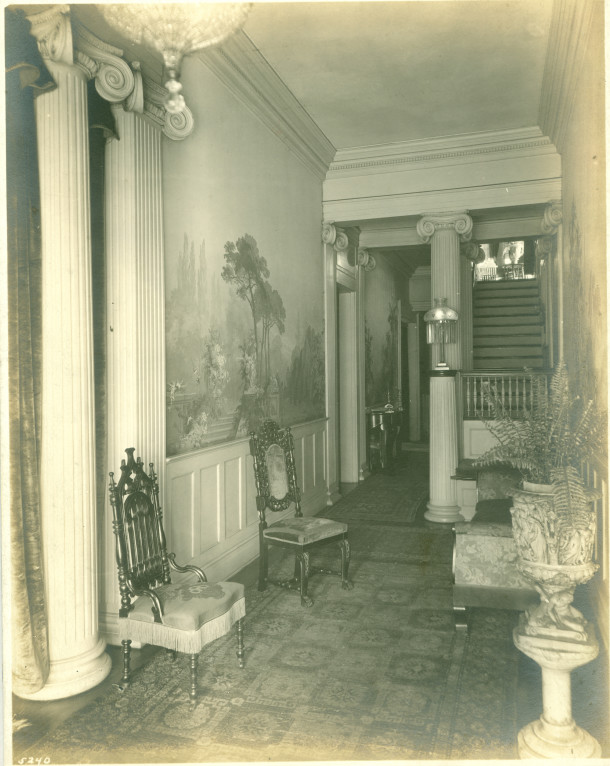 The Ovid Butler Jameson House became a gathering place for many of the interesting people of the time.  Besides prominent local individuals, visitors to the home over the 35 years of the Jamesons’ ownership included President Woodrow Wilson, actresses Ethel Barrymore and Helen Hayes, actors Otis Skinner and Alfred Lunt, and authors William Dean Howells and Henry James. 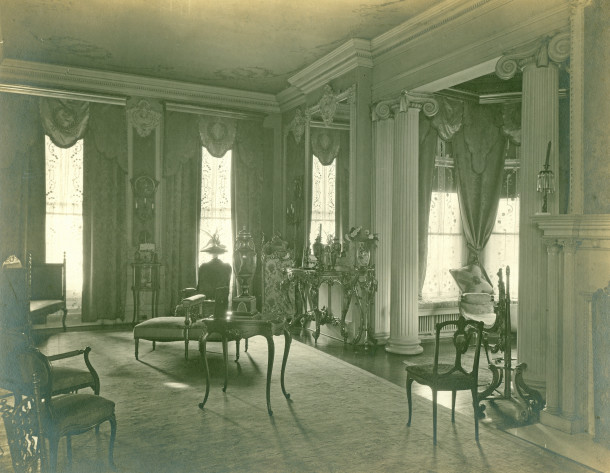 The Jamesons’ home was a hub for persons who appreciated literature, theatre, music, and spiritualism, as well as the social and political issues of the day.  Hauté held meetings of the Women’s Christian Temperance Union, the Indiana Republican Party, and the Indiana Woman’s Club in her parlor or her library.  Ladies’ teas were held in the dining room.  Plays were performed in the third floor ballroom by the “Tarkington Players,” the predecessor of the Little Theatre Society of Indiana and now known as the Booth Tarkington Civic Theatre of Indianapolis.   On Wednesday afternoons, the ballroom was the site of Miss Stanton’s dancing classes.  The Dramatic Club also rehearsed and performed in the Jamesons’ third-floor ballroom. 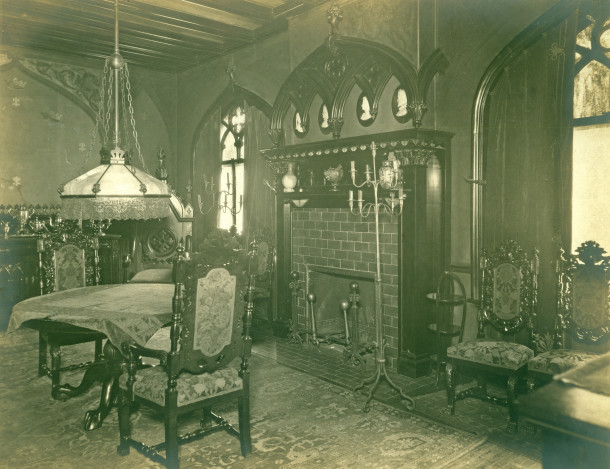 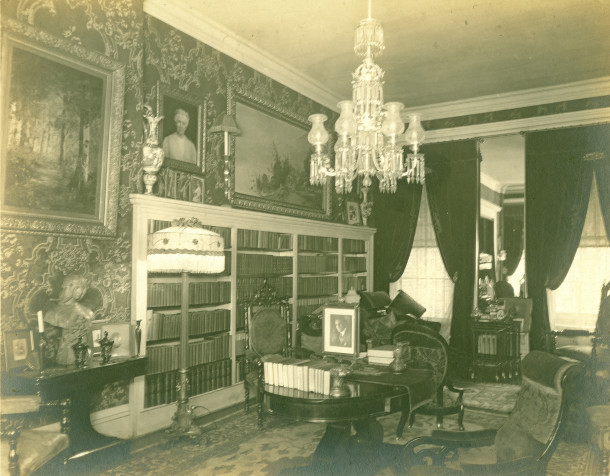 When the ballroom on the third floor of the Jameson residence was not being used by others, it was the site of theatrical productions mounted by the Jameson children and their neighborhood friends. 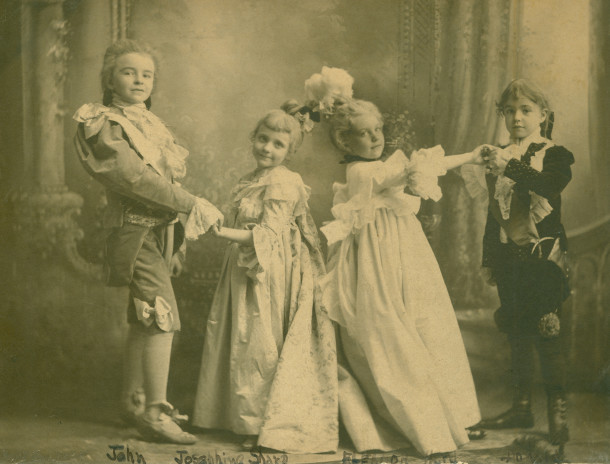 Ovid Butler Jameson passed away in 1915 at the age of 60.  Hauté Jameson remained in the home for another 22 years, hosting club meetings and parties for her friends and baptisms and holiday dinners for her family.  She died at home in 1937.  She was 78. 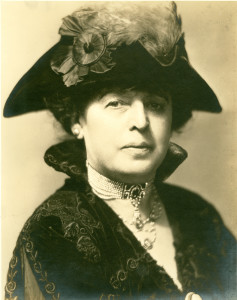 The Tarkingtons and Jamesons, as well as many other extended family members, are buried in Section 12 at Crown Hill Cemetery. 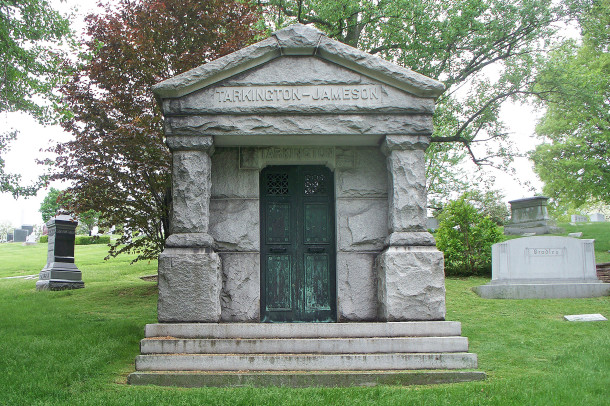 For a few years after her passing, the house was rented to antique dealers.  The first one was named Mina A. Markle.  The later one was Carlos Recker Sr., whose wife was a Butler.  In 1944, the former Jameson home was bought by Irwin Wright Cotton.  He operated the I. W. Cotton Electric Company in the residence for about a decade. 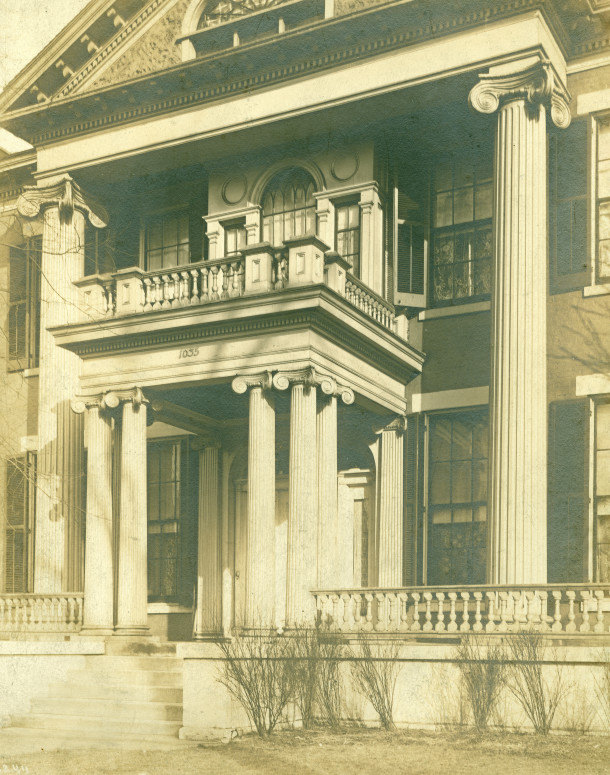 In 1955, the City of Indianapolis made plans to widen East 11th Street.  It was determined that 1035 North Pennsylvania Street would have to be sacrificed for the street project.  In July of that year, workers moved into the Jameson House to prepare for its demolition.  Over the next few weeks, they dismantled woodwork, flooring, lighting fixtures, and plumbing parts.  The century-old house was torn down later that year.  However, when the street was actually widened, it was not necessary to include the property on which the Jameson home had stood.  Neither was the property needed when the Interstate highway system was constructed in the 1960s and 1970s.

Today, the land on which 1035 North Pennsylvania Street once stood is an asphalt parking lot alongside the 11th Street on-ramp to eastbound Interstate-65.  There are no indications whatsoever of the history that occurred or the memories that were made on this little piece of earth. 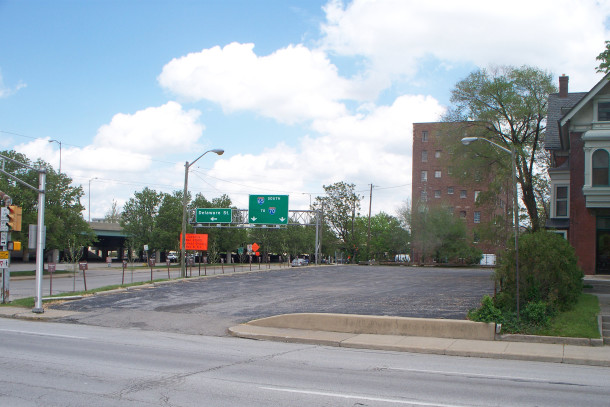 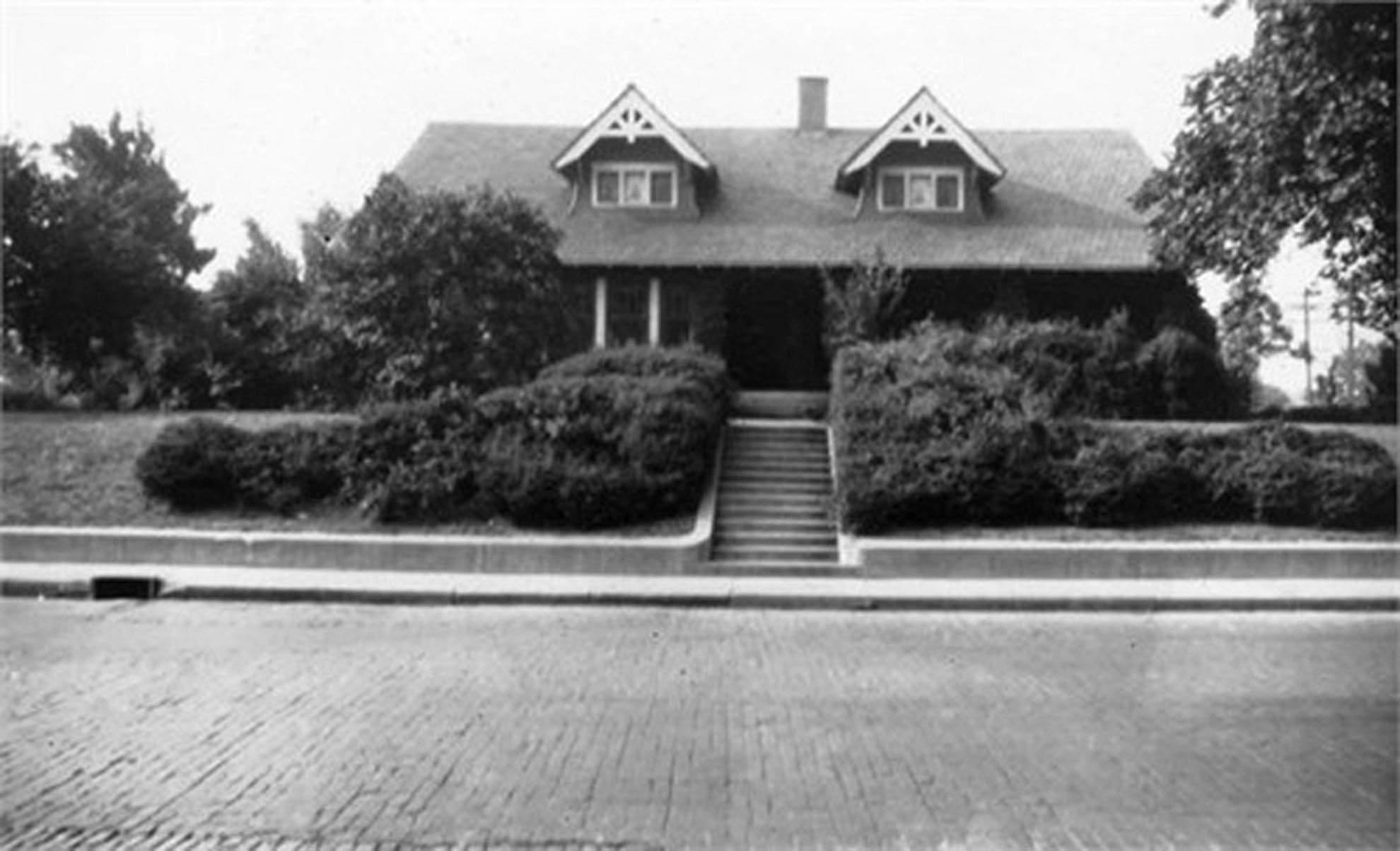