What can you tell me about the history of 1713 North Delaware Street and the families who lived there over the years? ~ Larry G., Indianapolis

Indiana was one of six states that were created from the Northwest Territory, an area of approximately 260,000 square miles that had been a part of Québec in British North America.  The United States of America purchased the land from the British in 1787, fewer than four years after the end of the American Revolutionary War. 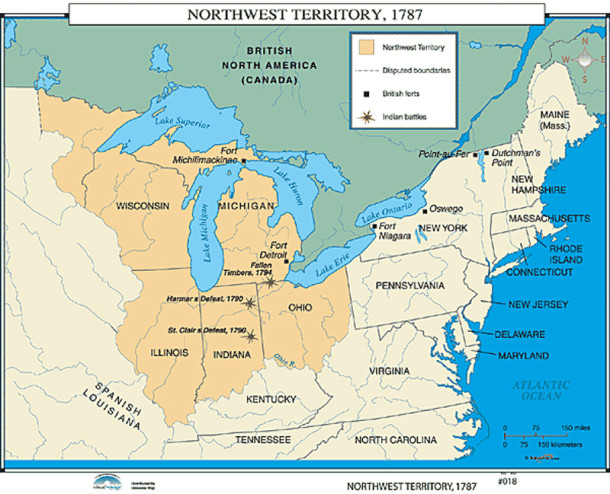 Following Indiana’s admission to the Union in 1816, the newly established state governnment mounted numerous projects to build roads, canals, railroads, and schools, in an effort to make it more desirable for people to move to Indiana.  On November 13, 1822, Samuel Henderson purchased the land on which 1713 N. Delaware Street now stands from the federal government, although the subject residence wasn’t built until more than seven decades later.  Henderson’s purchase was one of two adjacent 80-acre tracts that the Kentucky-born Henderson obtained from the land office in Brookville, Indiana. Henderson’s 160 acres were between what is now 16th Street on the south and what is now 21st Street on the north, and from what is now Illinois Street on the west to what is now Park Avenue on the east. 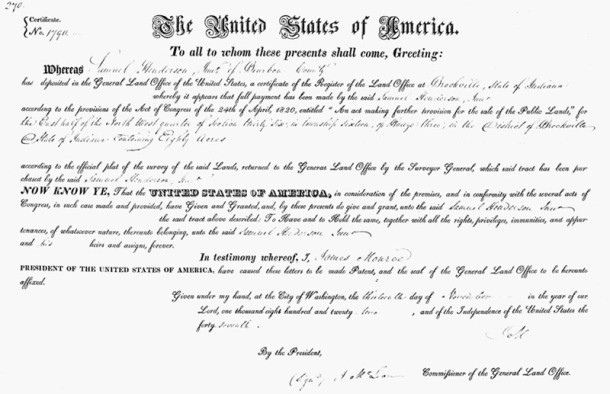 The residence  at 1713 North Delaware Street was built on land originally purchased by pioneer Samuel Henderson in 1822    ( Ancestry.com)      CLICK TO ENLARGE

In 1850, Samuel Henderson and his wife Nancy sold the western portion of their land to Elizabeth (Coram) Tinker.  Elizabeth Tinker was the wife of William Tinker, a sea captain. The Tinkers had a son, John, and two daughters, Elizabeth and Mary. Elizabeth Tinker married jeweler Washington H. Talbott, and Mary Tinker married banker William H. Morrison. When the land was platted by Tinker’s older daughter, it became the Elizabeth Talbott Revised Addition. Most of the lots still retain that same legal description to this day.

In 1886, the Tinker homestead, also called Talbott Place, became the residence and studio for revered Hoosier artist Theodore Clement Steele.  In 1902, with a bequest from the estate of John Herron, T. C. Steele’s studio became the first home of the John Herron Art Institute.  In 1905, the Tinker house was demolished to make way for the construction of a new building.  Designed by architects Vonnegut and Bohn, the John Herron Art Institute also became the first permanent home of the Art Association of Indianapolis in 1906.  It was renamed the Indianapolis Museum of Art in 1969, just prior to its relocation to the present-day grounds at 4000 Michigan Road. 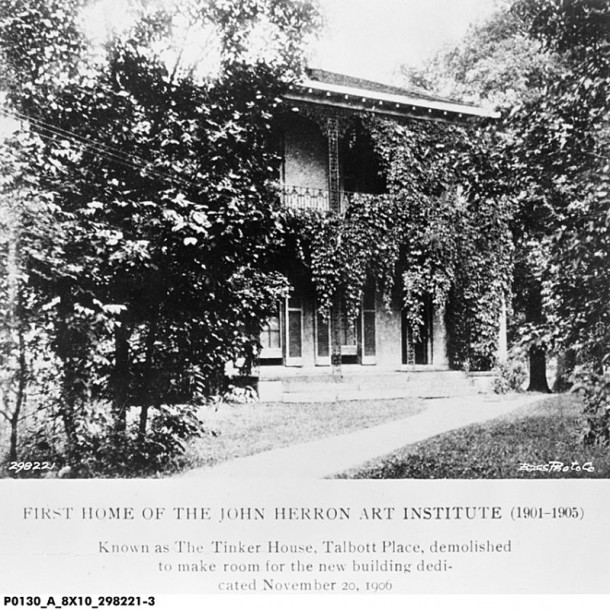 In 1850, Samuel Henderson and his wife Nancy sold the eastern portion of their land to William A. Otis.  In 1859, Otis sold some of that acreage to the State of Indiana to create a permanent home for the Indiana State Fair.  When the Civil War broke out in 1861, then Governor Oliver Perry Morton requisitioned the use of the new fairgrounds as an induction facility for Union soldiers.  Named Camp Morton, in 1862 it became a prisoner-of-war camp for captured Confederate soldiers.  Union troops were stationed immediately south of Camp Morton, to guard the prisoners, an encampment that was known as Camp Burnside. 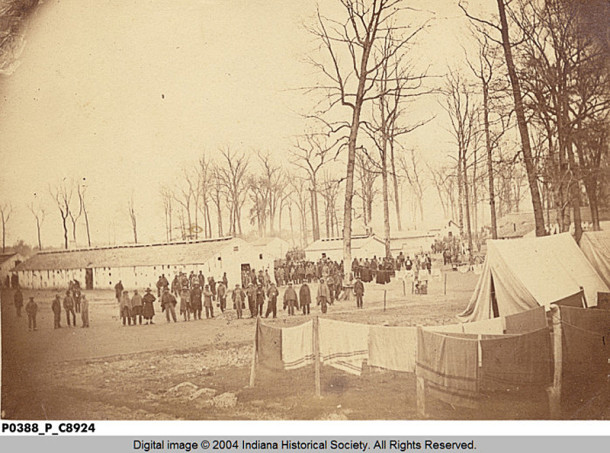 From 1861 to 1865, the Indiana State Fairgrounds became a Civil War induction facility and later a prisoner-of-war camp    (photo courtesy of INDIANA HISTORICAL SOCIETY)     CLICK TO ENLARGE 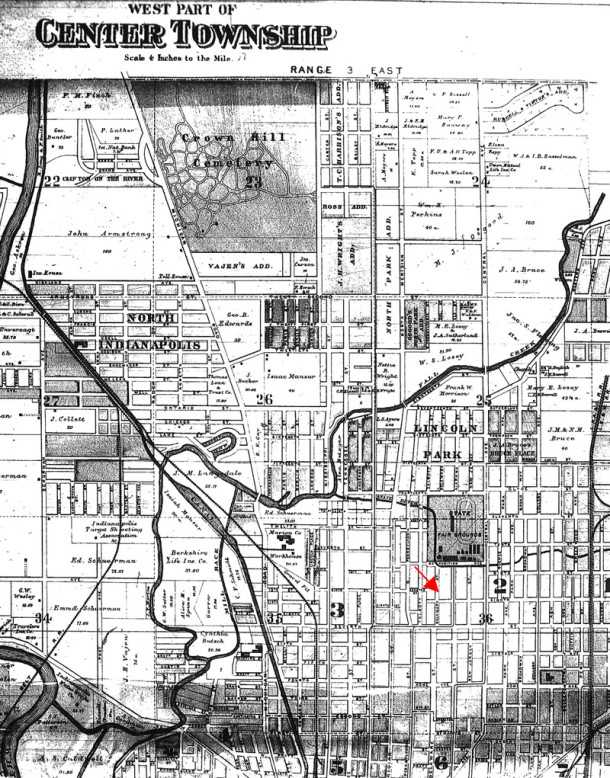 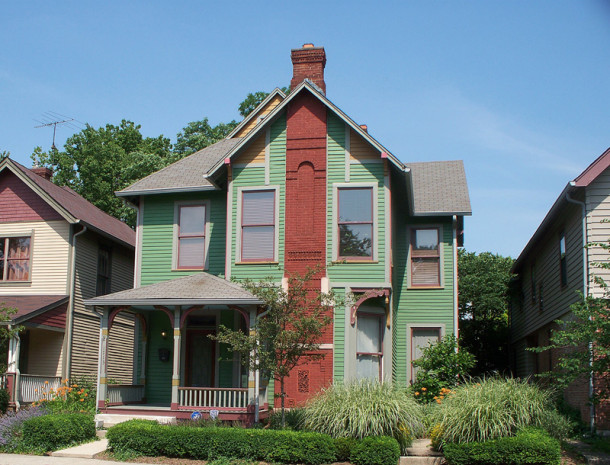 The residence at 1713 North Delaware Street, as it appears today          (photo by Sharon Butsch Freeland)

John Milnor worked for Charles F. Sayles & Company, whose offices were located at 127 E. Market Street.  The firm handled insurance and real estate sales, as well as home loans.  Milnor’s wife Nellie’s maiden name was Warner.  On the 1910 Census, the Milnors’ neighbors included Nellie’s sister Kate Warner Fincock and husband Samuel Fincock, who lived at 1711 North Delaware Street, and the two women’s brother, Joseph Warner, who lived at 1714 North Delaware Street.  John and Nellie Milnor’s daughters — Irene, Jessie, and Marian — attended nearby Tudor Hall School for Girls at 16th and Meridian Streets and Shortridge High School on Pennsylvania Street between Michigan and North Streets.  The Milnors resided in the home at 907 / 1709 / 1715 / 1713 N. Delaware Street from 1895 until 1918, when they moved to a new home at 3018 Fall Creek Boulevard in the Jose-Balz Addition. 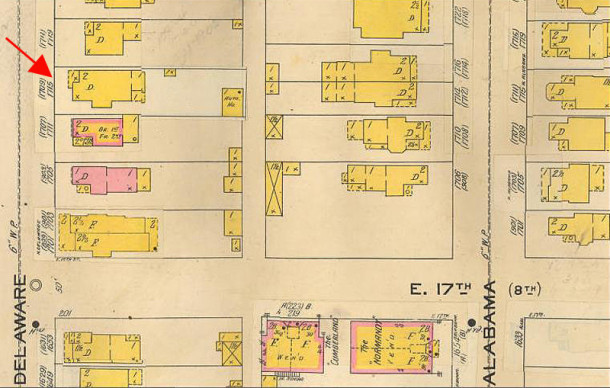 In 1918, the owners of 1715 N. Delaware Street were Howard L. and Josephine Baldwin Holcomb.  Howard was the President of Holcomb-Siess Ford Motor Cars, Parts, and Service, which was located at 533-537 N. Capitol Avenue.  In the 1919 city directory, the residents of the home were Ebenezer B. and Barbara Baldwin, who were Josephine’s parents and Howard’s in-laws.  By the time of the 1920 Census, the four were living together in Anderson, Indiana.  Howard and Josephine were working for an auto company, and her parents were retired.

In 1920, the owners were J. W. D. Aspy, a livestock dealer, and his wife Flora.  Their 26-year-old son John A. M. Aspy lived with them.  John was a physician with an office in the Hume-Mansur Building.  The Aspys remained in the home until 1926.  After the parents passed away, the son took up residence in the Columbia Club on Monument Circle, a short walk to his medical practice on East Ohio Street.

From 1926 to 1938, the owners of the home were Joseph F. O’Mahoney and his wife Evelyn O’Connor O’Mahoney. Their children were Joseph F. Jr., Ruth E., William P., Robert M., and James R.,    The O’Mahoneys operated a restaurant at 1531 N. Pennsylvania Street (now the site of the Varsity Lounge) and a tea and coffee house at 214 E. Market Street (inside the now-demolished Tomlinson Hall).  In 1939, the family moved to 1831 Alabama Street, the first house south of Footlite Musicals.  1715 N. Delaware was listed as vacant in the 1939 city directory.

By the time of the 1940 city directory, it would appear that the home had become a rooming house, as four names were listed as residing there.  Tenants were Whitt H. Hazelwood, Margaret J. Amon, Eugene Lewis, and Ralph Gardner.

In the 1951 city directory, John Ward, a gardener for a private estate, and his wife Marie were the home’s owners.  From 1958 to 1960, William B. Sullivan and wife Mary Gabelle Sullivan were the homeowners.  Sullivan was a sales rep for Blue Cross-Blue Shield.

In 1976, during the time period of the Jarrett and Schoen ownership, the residents of Herron-Morton Place formed a neighborhood association.  The area was listed on the National Register of Historic Places in 1983 and became an Indianapolis Historic Preservation Commission Conservation District in 1986.

From 1990 to 1998, Larry Gregerson was the owner of the home and did extensive renovations to the property.  For a brief period after Larry’s stewarship of the property, 1997-1999, Paul E. Leonardi was the owner.

Since 1999, a history professor at Butler University and his wife, an attorney with the Indiana Court of Appeals and an Adjunct Professor at Indiana University School of Law, have made 1713 North Delaware Street their family’s home.  Out of respect for their privacy, I have not included their names here.