A friend of mine has asked me about the history of the Rhodius Park area, since she has just moved into a house across from the park. I tried searching the HI website, as well as the HUNI website, and came up with nothing.  Does HI have something on the area around Rhodius? ~ Anna B.

Although Rhodius Park did not open until 1924, the area surrounding it began to be settled nearly a century earlier.  In 1822, the land that became the city park was purchased from the federal government by James H. McClure and William Myers.  A few years later, their properties were purchased by Theodore Johnson and John and Jacob Kohl, respectively. 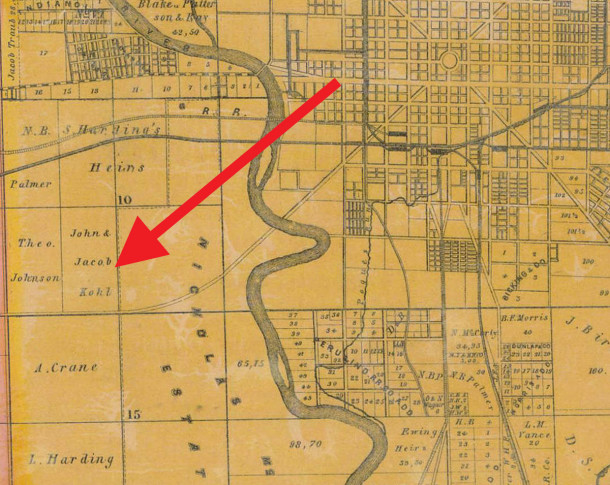 In the 1830s, the construction of the National Road through the heart of Indianapolis stimulated growth in the previously remote areas of Marion County that were west of the White River.  Over the next few decades, many little farming villages were established both north and south of the highway, including Stringtown, Mt. Jackson, Hawthorne, and Haughville. The area around what would one day become Rhodius Park was in the village called Belmont.

With the formation of the Indianapolis Belt Railway and Stock Yard Company in 1877, many new jobs were created.  There was a great influx of people from Tennessee, Kentucky, southern Ohio, and southern Indiana seeking work in the companies located along the National Road and the Belt Railway.  Some of the early factories that employed area residents were Indianapolis Abbatoir, Parry Manufacturing Company, Piel Brothers Starch Works, Nordyke & Marmon Co., Puritan Bed Spring Co., and Bixby’s Shinola Shoe Polish.

By 1882, the Town of Belmont had grown to several thousand people, and the residents decided to incorporate their village.  They renamed Belmont the Town of West Indianapolis.  For fifteen years, it was one of the city’s largest suburbs.  Many of the surnames of the town’s early landowners’ are still known today, because the streets in West Indianapolis were named for them.  They included Samuel Harding, John Kappes, Nicholas McCarty, Dandridge H. Oliver, and Nathan B. Palmer. 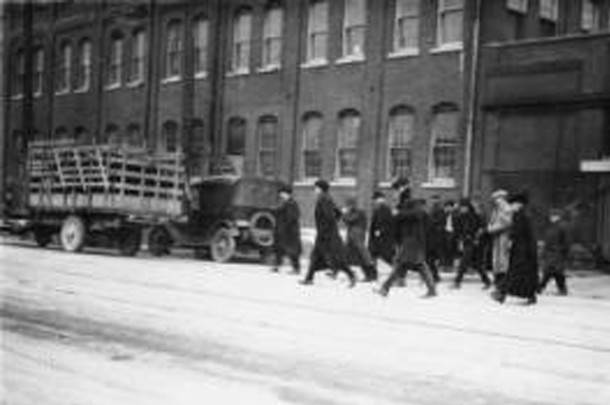 In 1897, West Indianapolis was annexed to the City of Indianapolis.  In the years after annexation, European immigrants from countries like Germany and Italy added diversity to the residential population.  As in earlier decades, it was the factories located on the near southwest side that attracted the new arrivals.   A 2011 Historic Indianapolis article related additional details about West Indianapolis, which you can access here.

In 1913, much of the eastern portion of the former Town of West Indianapolis was flooded by the overflowing waters of the White River.  The low area to the east gained the nickname of “The Valley,” and the higher area towards the west was henceforth known as “The Hill.”  In later years, a portion of the southwest was dubbed “The Hollow” and a portion of the northwest, “The Bottoms.”  These terms, as well as the town’s former name of “West Indianapolis,” continue to be used by locals today. 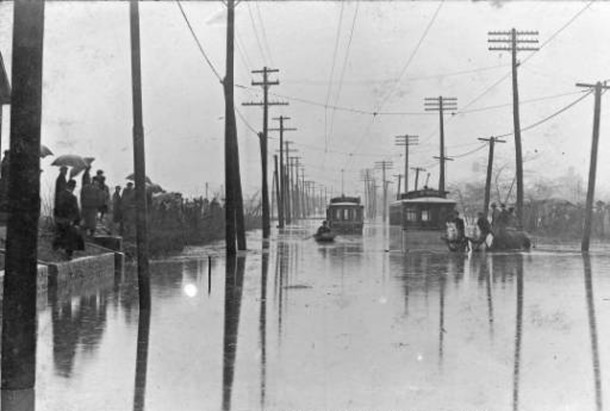 In March of 1913, the most disastrous flood in the state’s history hit the west side of Indianapolis especially hard   (W. H. Bass Photo Company College image courtesy of the Indiana Historical Society)

A 33-acre section bounded by Belmont Avenue on the west, Wilkins Street on the south, Reisner Street on the east, and Wyoming Avenue (called Wyoming Street, today) on the north had been platted for residential lots, but because it was a bit swampy, no homes had been built there yet.  The City of Indianapolis purchased the lots in 1913, 1914, and 1917, with a bequeath in the will of George Rhodius Jr. 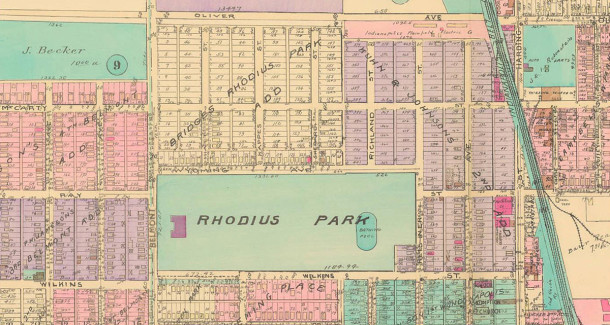 George Rhodius Jr. (1865-1909) was the only child of George Rhodius Sr. (1822-1867) and Maria Rhodius (1835-1905).  The parents immigrated to the United States from Germany prior to the Civil War.  They operated a restaurant at 15 North Meridian Street.  That location would later become the site of the Kahn Building (known in more recent years as the King Cole Building).  George Sr. died when George Jr. was only two years old. 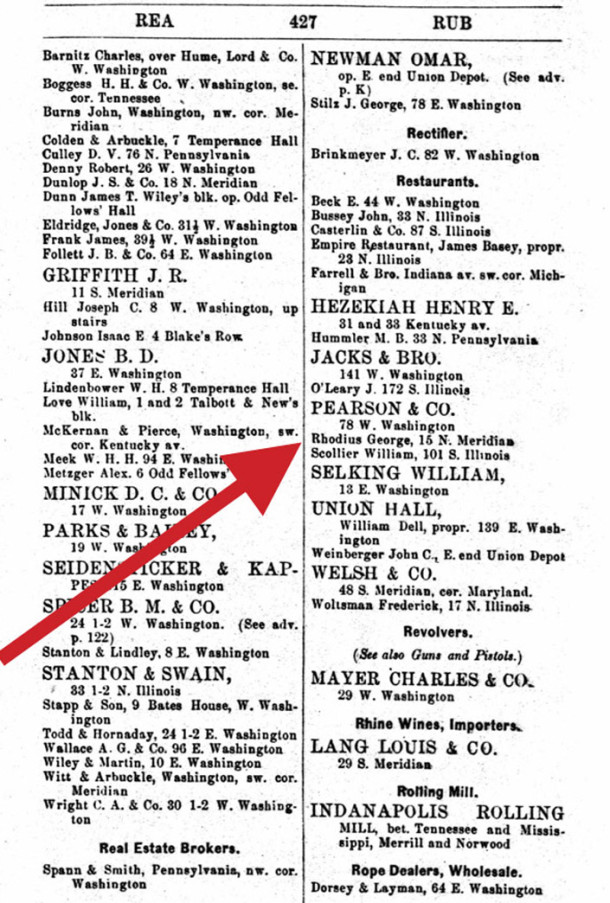 After her husband’s death, Maria Rhodius built the Circle Park Hotel in the southeast quadrant of Monument Circle.  Historic Indianapolis ran a “Sunday Ads” piece in 2011 that discussed the Circle Park Hotel, which you can read here.  As a result of her hard work, Mrs. Rhodius became both well-respected and well-to-do.  She sent her son to the University of Notre Dame and funded a number of his vacations to Europe. 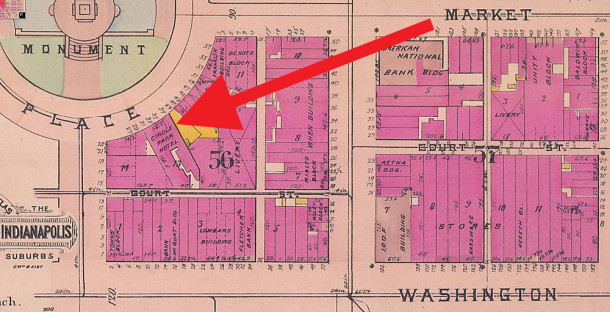 When Maria Rhodius died in 1905, son George inherited approximately one million dollars from his mother’s estate.  Unfortunately, George’s mental health declined rapidly after his mother’s passing.  His inability to make sound decisions resulted in his becoming the target of an unscrupulous opportunist. 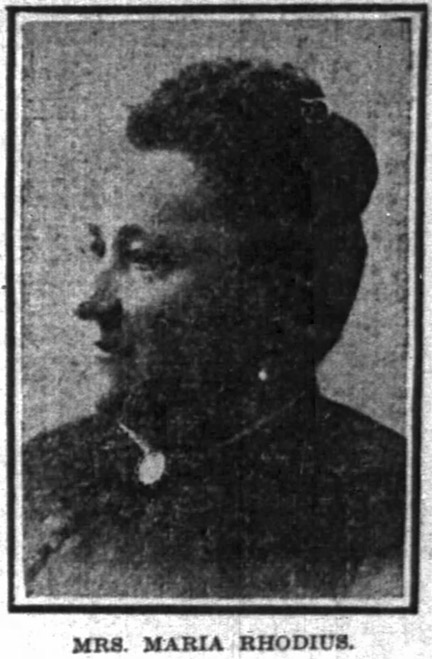 Photo in The Indianapolis News November 15, 1905

On January 21, 1907, a woman named Elma Dare kidnapped 41-year-old George Rhodius and took him by train to Louisville, where the two were married.  They then boarded another train bound for New York City.  During their travels, the new Mrs. Rhodius got her feeble-minded husband to sign a new will, making her the sole beneficiary of his estate.  When Rhodius’ Indianapolis attorney, John Wilson Claypool, discovered Rhodius was missing from his home, he notified the authorities.  The police caught up with the couple in Meadville, Pennsylvania, where Elma Dare was arrested.  For the next few years, a number of court cases ensued.  Because there was a great deal of publicity surrounding the situation, the trials had to be moved outside Marion County.  Ultimately, the marriage was annuled, and the will in Elma Dare’s possession was thrown out. 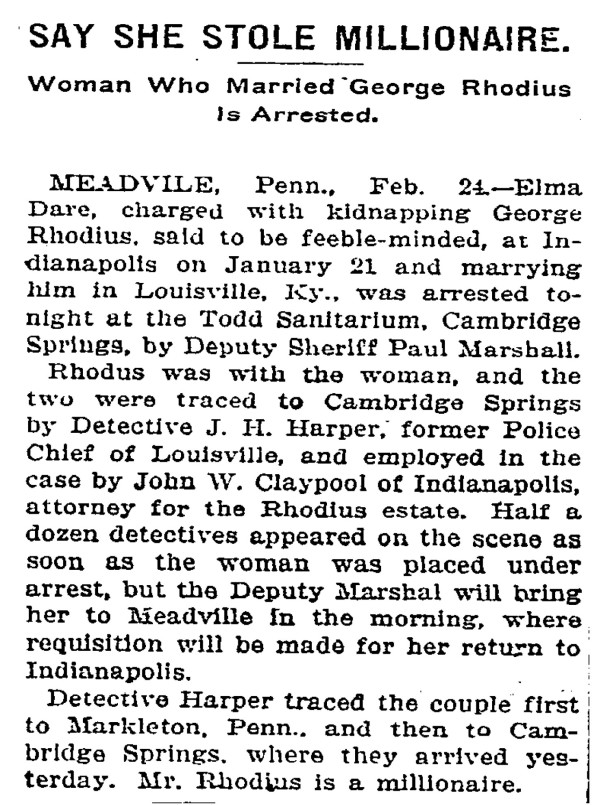 Newspaper article appeared in The New York Times on February 25, 1907

To complicate matters, George Rhodius Jr. died somewhat suddenly in 1909.  Due to the bizarre circumstances of the various lawsuits, the funds did not become available to the Board of Park Commissioners until 1911.  Had Elma Dare prevailed in her plan to inherit George Rhodius’ fortune, Rhodius Park might never have been built.

Ultimately, a judge decided to honor the will prepared by George Rhodius just after his mother’s death in 1905, as well as a 1907 codicil, both of which were executed when he was of a sounder mind.  In that document, George Rhodius had planned to leave a sizable sum of money to the Parks Department, as well as to various charities.  The bequest to the Board of Park Commissioners was finally made in 1911.

The City acquired the land for Rhodius Park during the years it hired landscape architect and city planner George Kessler (1862-1923) as a consultant, so it was Kessler who designed Rhodius Park.  The original community center was at 1001 South Belmont Avenue, on the western boundary of the park.  It was demolished in the 1990s, and that site is now a parking lot.  The building was replaced by the Rhodius Park Family Center, which is located at 1720 Wilkins Street, on the eastern (or opposite) boundary of the park and adjacent to IPS William Penn School # 49. 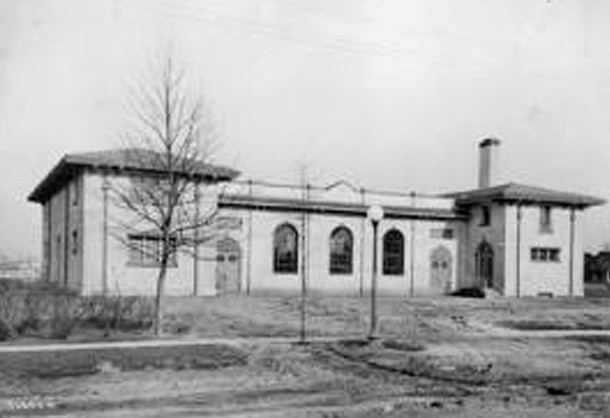 The original swimming pool was oval-shaped and was built up off the ground on a platform.  It was located on the far east end of the park.  Today the site of the former swimming pool is the location of the Rhodius Park Family Center and IPS 49. 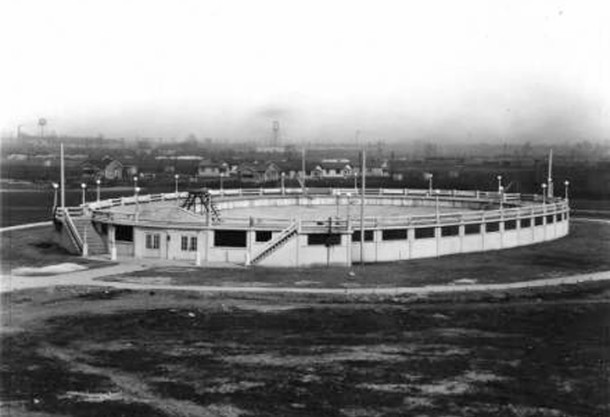 The original Rhodius Park swimming pool, which was oval shaped and was built above ground, opened in summer of 1924     (W. H. Bass Photo Company Collection image courtesy of the Indiana Historical Society) 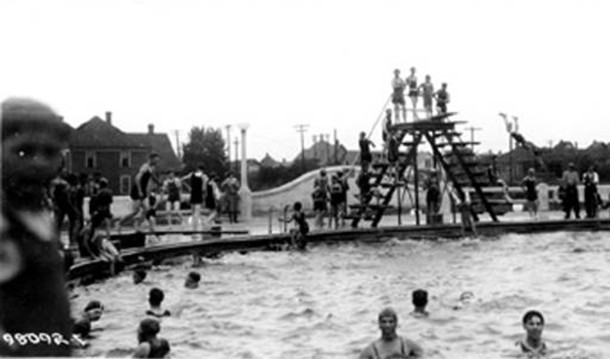 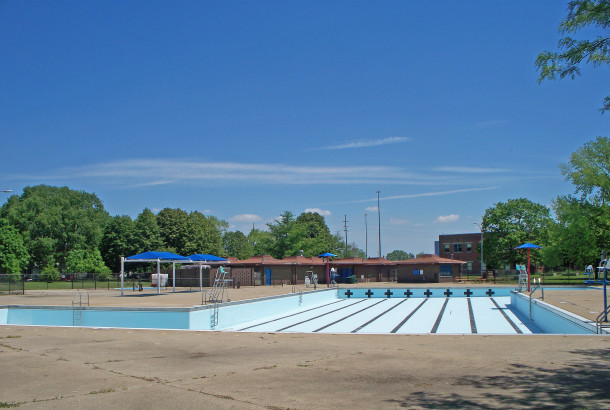 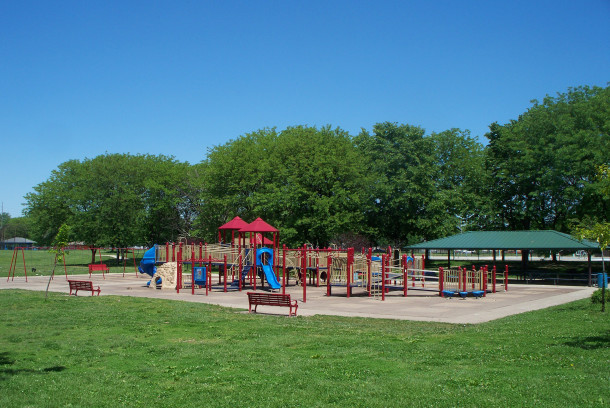 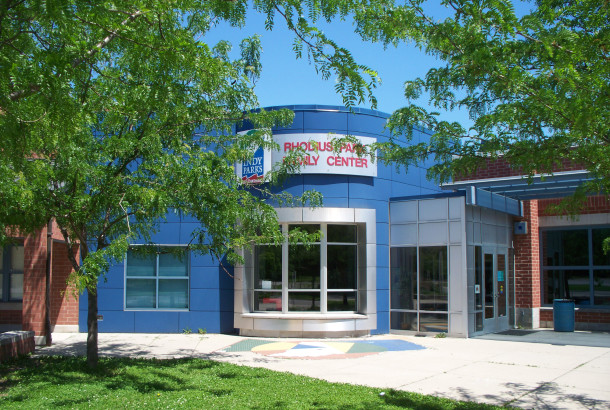 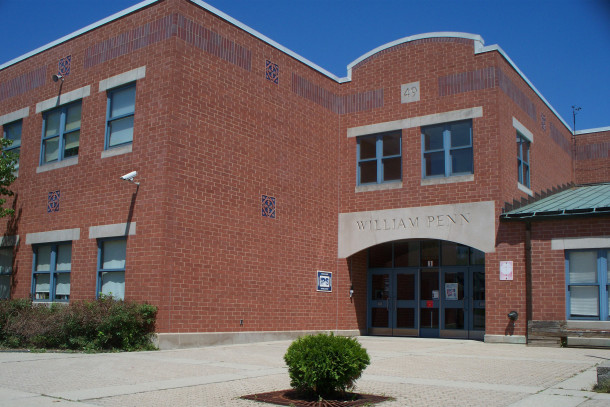 IPS’s William Penn School #49 is attached to, and shares its recreational facilities with, the Rhodius Park Family Center    (photo by Sharon Butsch Freeland) 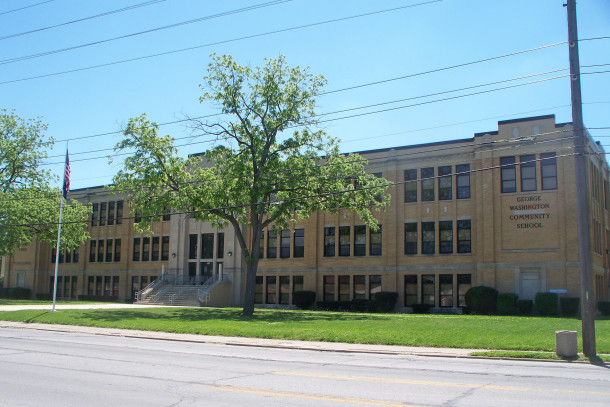 Locals claim that the area still retains the “feel” of a small town.  Despite being a working class neighborhood of modest homes and large industrial facilities, people care about their neighbors.  They also note that Rhodius Park is one best spots in town for viewing July 4th fireworks.

Historic Indianapolis contributor Joan Hostetler wrote a “Then and Now” piece in 2013 about the corner of West Morris Street and Blaine Avenue, where additional information and photos about the area appear.  You can access that article here. 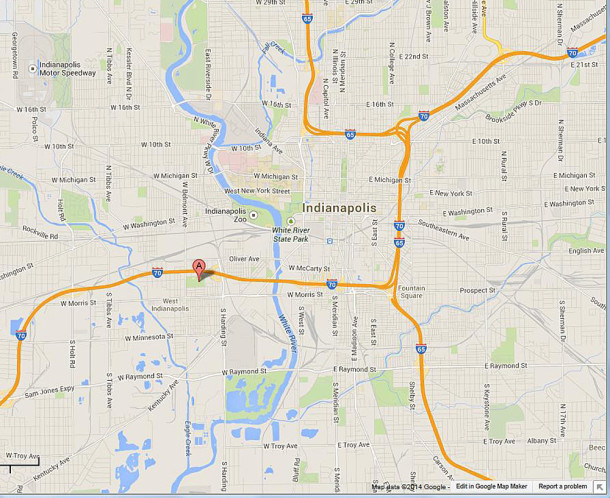