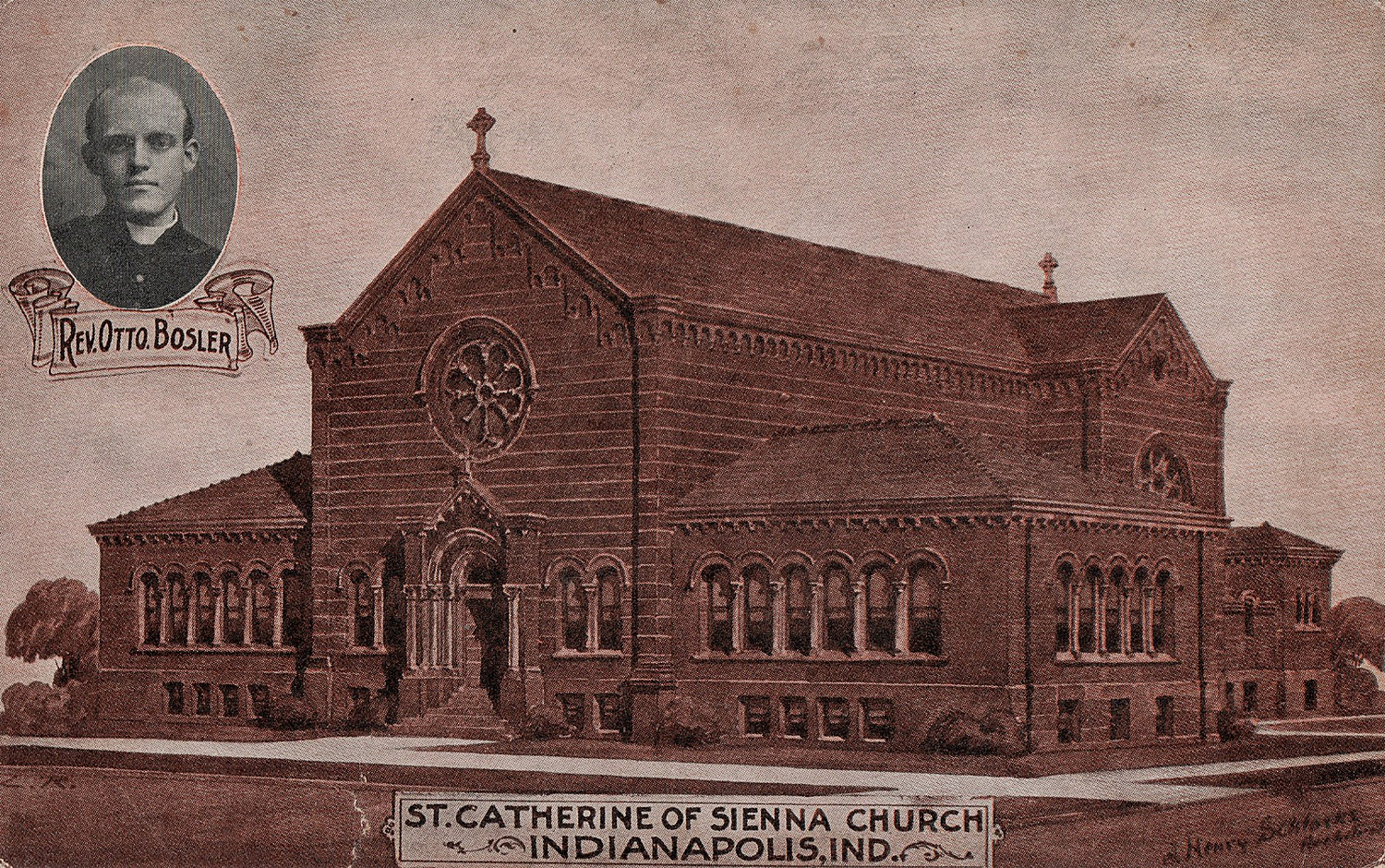 Hi, HI.  Last weekend, I bought an old postcard of an Indianapolis church.  Can you please tell me if the building pictured on the postcard is still standing today, and if it is, where it is located?  ~ Evan F., Indianapolis 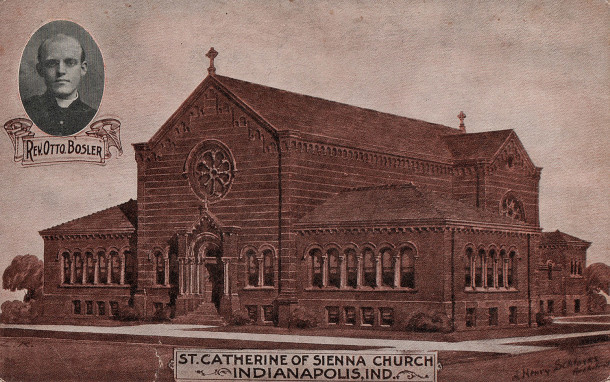 I am very sorry to inform you that the beautiful church pictured on your recently acquired postcard no longer exists.  The former St. Catherine of Siena Church was just south of Raymond Avenue and just east of Garfield Park.  The convent school and the rectory that were adjacent to the church are also gone.  The address of the church was 2245 Shelby Street.  The address of the rectory was 1109 East Tabor Street.  The address of the convent school was 1115 East Tabor Street.  From the first decade of the 20th century to the last decade of the 20th century, these buildings served their community well. 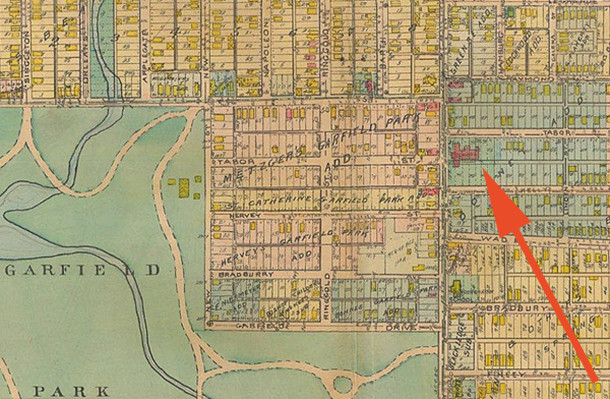 1918 Baist Atlas map shows St. Catherine of Siena Catholic Church before the school building was erected to the east of it   (courtesy of IUPUI Digital Archives)             CLICK ON MAP TO ENLARGE

Bishop Francis Silas Marean Chatard (1834-1918) made the decision early in 1909 to create a new parish to serve the south side of the city.  Chatard was the first bishop of the newly formed Archdiocese of Indianapolis, holding that position from 1898 to 1918.  He is also the man for whom Bishop Chatard High School was named in 1961.  The boundaries of St. Catherine’s parish were from the White River and the Indianapolis Belt Railroad tracks on the west, north to Minnesota Street, east to Keystone Avenue, south to Southport Road, north on Madison Avenue to Southern Avenue, and back west to White River.

The site originally selected for St. Catherine of Siena Church was four blocks south of where it was ultimately erected.  When negotiations for a property near Finley Avenue and Shelby Street broke down, the site at Tabor and Shelby Streets was purchased instead.  The cornerstone was laid in a downpour of rain on July 25, 1909.  Parishioners can be seen hoisting umbrellas in a photo of the ceremony. 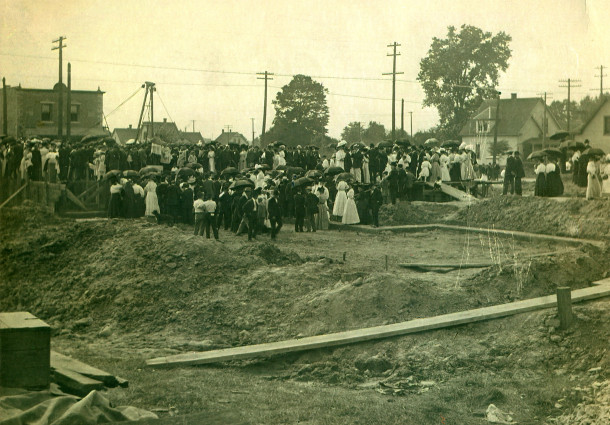 We note that the word “Sienna” was misspelled on the postcard, as well as in newspaper articles in the early years of the church’s existence.  There is only one “n” in “Siena.”  Perhaps the double-n spelling was considered an acceptable “Americanized” version of the name at the time the parish was created.  However, the Dominican tertiary for whom St. Catherine’s was named was born in Siena, Italy, so her name came from the name of her hometown.  In later years, articles about and publications by St. Catherine spelled Siena with only one “n,” indicating that someone in a position of authority had made the decision to adopt the Italian spelling.

Catherine was born in Siena in 1347 and died in Rome in 1380.  She tended to the sick and served the poor.  St. Catherine was a scholastic philosopher and theologian, as well.  Her writings include hundreds of poems and letters and are considered to be among the classics of the Italian language.  St. Catherine of Siena is one of two patron saints of Italy, the other being St. Francis of Assisi.  She is one of six patron saints of Europe, the others being Benedict of Nursia, Saint Cyril, Saint Methodius, Bridget of Sweden, and Edith Stein.

Charter members of St. Catherine’s Parish included families with the surnames of Betzler,  Braun,  Budenz,  Cheezum,  Curran,  Mahern,  Oberting,  Sullivan,  Straub,  and Weber.  The original building was constructed as both a house of worship and a school.  The cost of the building was $38,000.  The dedication took place on May 22, 1910.  Catholic societies from throughout the city and a marching band assembled at Fountain Square and participated in a mile-long procession to the church. 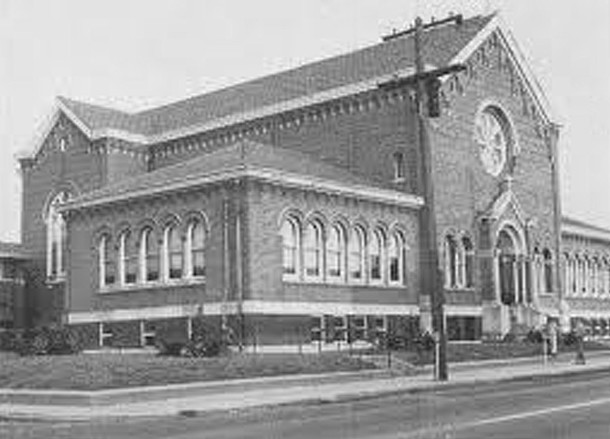 St. Catherine of Siena Church at 2245 Shelby St, as it appeared soon after construction was completed in 1909  (photo courtesy of the Catholic Archdiocese of Indianapolis) 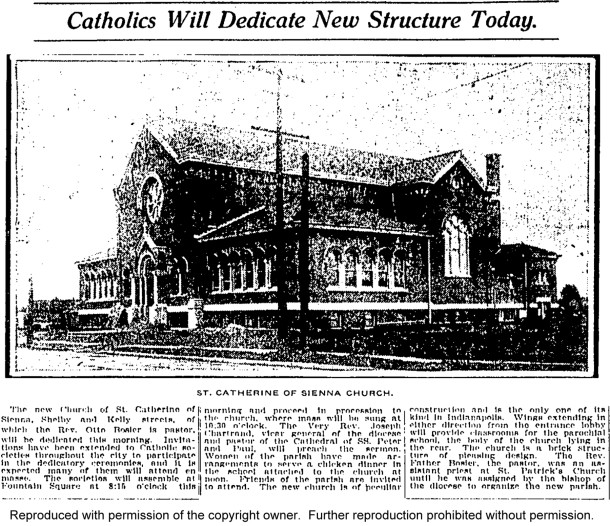 May 22, 1910 article about the dedication of St. Catherine of Siena Church   CLICK ARTICLE TO ENLARGE

For the first five years, there was no rectory for the parish.  Two rooms in the north wing of the church were used as living quarters by the pastor.  The classrooms were staffed by Sisters of Providence from St. Mary-of-the-Woods College.  As there were no convent quarters for the nuns at St. Catherine for the first fifteen years of the school’s existence, the sisters who taught there resided at St. Patrick Catholic Church at 950 Prospect Street and either walked to St. Catherine or rode the streetcar. 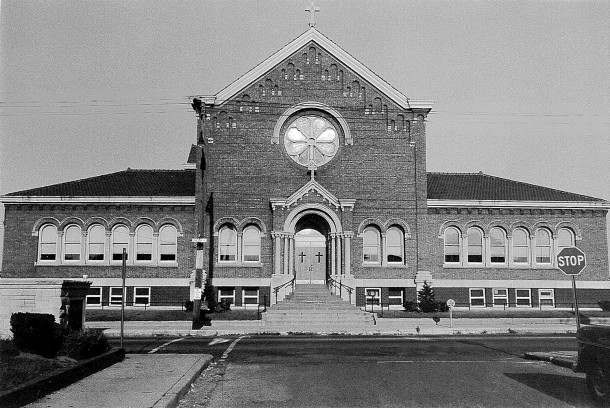 St. Catherine of Siena Church was located at the corner Shelby and Tabor Streets frp, 1909 to 1998      (photo courtesy of the Catholic Archdiocese of Indianapolis)

The first rectory for the church was a frame house, which was originally built on a residential lot at 1417 E. Kelly Street.  In 1914, the house was moved two blocks west to the church’s property.  The Indianapolis Public School System then built IPS School 34 on that site.  The public school survives today as the Eleanor Skillen Elementary School.

St. Catherine’s classrooms were all located in the church in the early years, but the space allotted for the school was soon outgrown.  On April 18, 1922, ground was broken for a separate school building. The school cost $50,000 to build.  The new St. Catherine School was dedicated on September 3, 1922, again with a parade from Fountain Square.  The ceremonies were directed by Bishop Joseph Chartrand (1870-1933).  A south side high school was named for Chartrand from 1962 to 1969.  After consolidation with Kennedy High School (originally called Sacred Heart High School from 1914 to 1966), the school then was renamed Roncalli High School.

September 4, 1922 newspaper article from The Indianapolis Times   CLICK TO ENLARGE 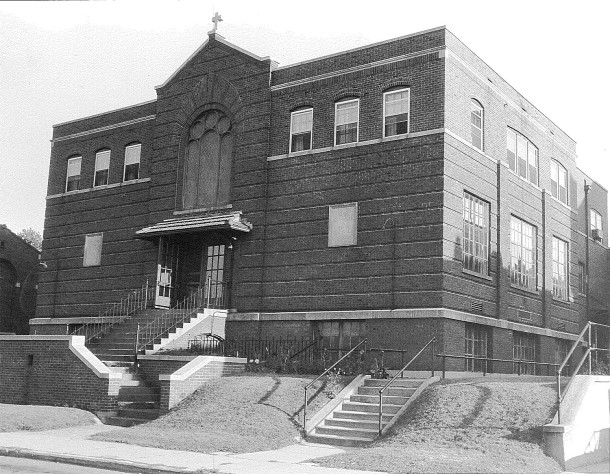 September 24, 1922, article in The Indianapolis Star    CLICK TO ENLARGE

After utilizing the frame home that had been moved from Kelly Street to the churchyard as the rectory for more than a decade, a 2-story brick rectory was built behind the church, facing Tabor Street. The new rectory was christened on September 5, 1926.  The frame house was moved across the street and became a private residence again. 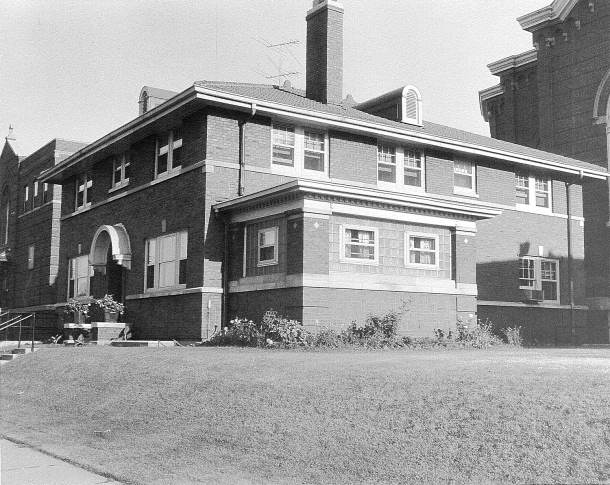 In 1926, a new 2-story brick rectory replaced the smaller frame house that had been moved to the lot from Kelly Street in 1914 (photo courtesy of the Catholic Archdiocese of Indianapolis)

On June 19, 1934, during the severest years of the Depression, the parish celebrated its 25-year Silver Jubilee.  Despite the hard times, it was a joyous period for the parish.  The number of families who had joined the church continued to grow, as did the number of children enrolled in the school.  An organ was installed in the sanctuary.  The Catholic Youth Organization (CYO) and St. Catherine’s Dramatic Club provided wholesome recreation and entertainment for the young people in the parish. 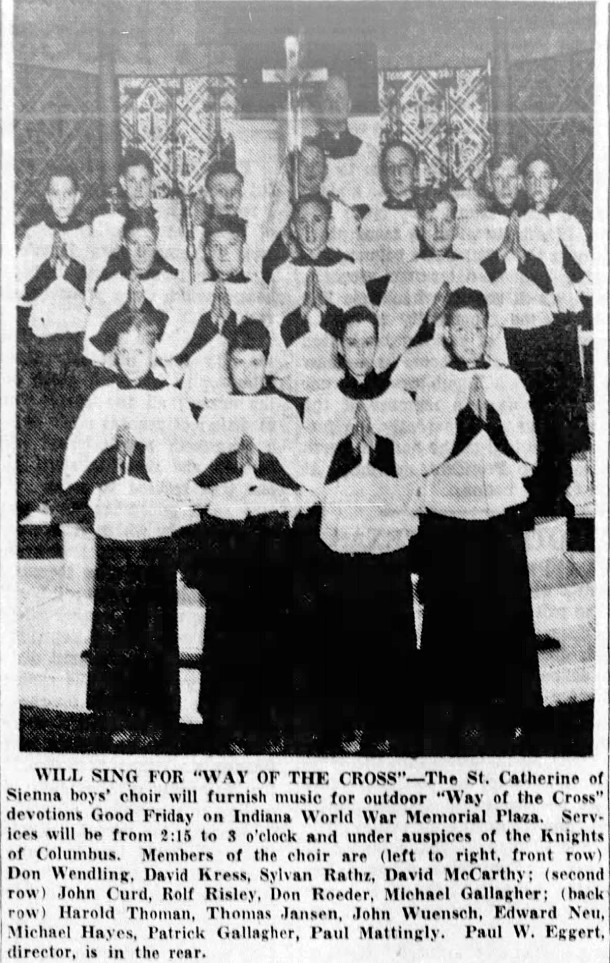 (April 4, 1944 clipping from the Indianapolis Star)

In 1959, the parish celebrated its 50-year Golden Jubilee. The church was extensively redecorated for the occasion.  The interior was completely repainted, and marble altars and hand-carved statues were installed. 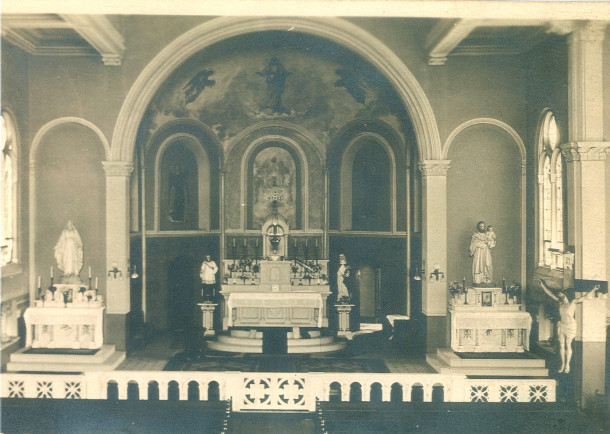 The 1960s brought marked change to St. Catherine of Siena.  As a result of the Second Vatican Council, a directive was issued for Mass to be celebrated facing the congregation instead of facing the altar.  Mass began to be spoken in English instead of in Latin.  About the same time, hundreds of homes in the parish were purchased by the federal government for the construction of the new Interstate highway system.  I-65 cut a north-south swath through St. Catherine’s parish about three blocks wide and about a mile long.  I-465 also crossed the parish from east to west on the parish’s southern end.  For nearly a decade, segments of the highway were under construction, causing detours and delays.  I-465 was completed in 1970, and I-65 was completed in 1976.  The I-65 portion of the freeway system was only a few hundred feet east of St. Catherine, and the Raymond Street interchange to access I-65 was only a few hundred feet north of St. Catherine. 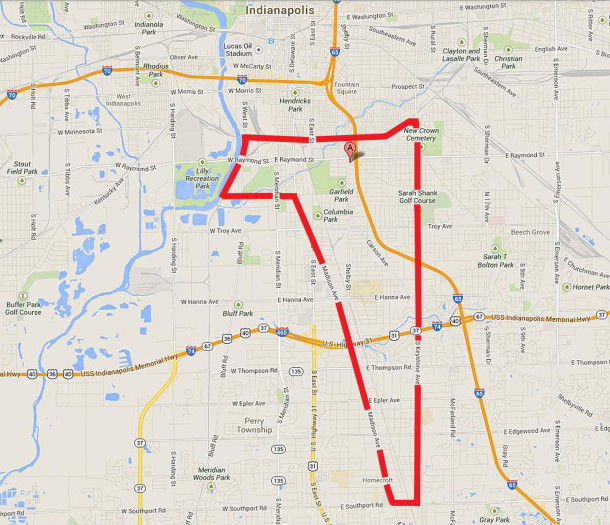 The Interstate highway system was the death knell for St. Catherine of Siena, cutting through the parish in two locations      (map courtesy of Google)

About 1,000 families belonged to St. Catherine of Siena Church at the height of its membership.  With the building of the Interstate system, it became less convenient for those who lived on the other sides of the highways.  Residential streets that formerly extended for blocks, or even miles, dead-ended.  Children who formerly walked to school and parishioners who once walked to church could no longer do so with the Interstate dissecting the neighborhood.  Around the same time, the migration of families from many urban neighborhoods to the suburbs had begun on all sides of Indianapolis.  In addition, the 1909, 1922, and 1926 parish buildings were aging and in need of repairs and updating.  All of the above situations contributed to a decline in St. Catherine’s membership.

On January 10, 1997, after consulting with the Council of Priests, the Most Reverend Daniel M. Buechlein, O.S.B., Archbishop of Indianapolis, issued a decree “. . .  relegating St. Catherine Church and School to profane but not sordid use.”  This official act paved the way for the property to be demolished or used for non-religious purposes. 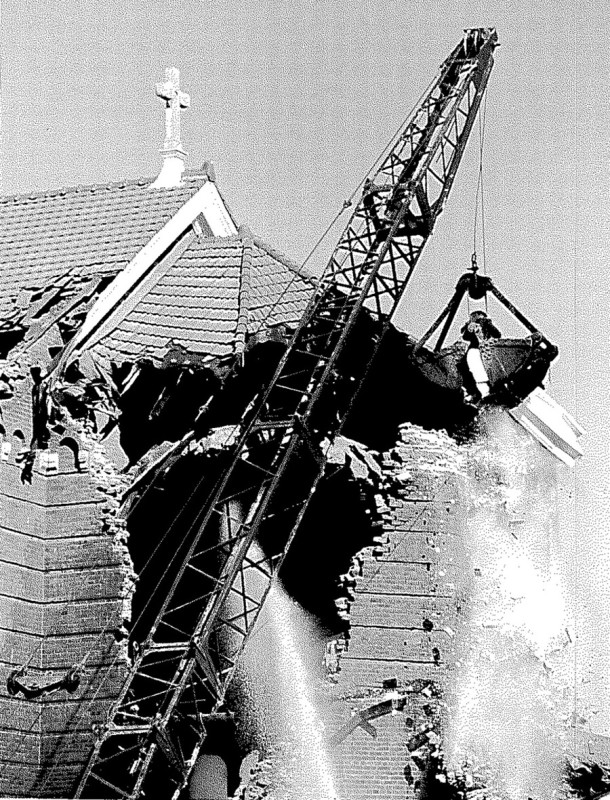 On June 12, 1998, the Roman Catholic Archdiocese of Indianapolis sold the property to BGM LLC.  Today there is no indication that there was ever a church, school, or rectory on this site.  With businesses like a tanning spa, video store, pizza place, and bargain discount store, the 2200 block of Shelby Street is now completely commercial. 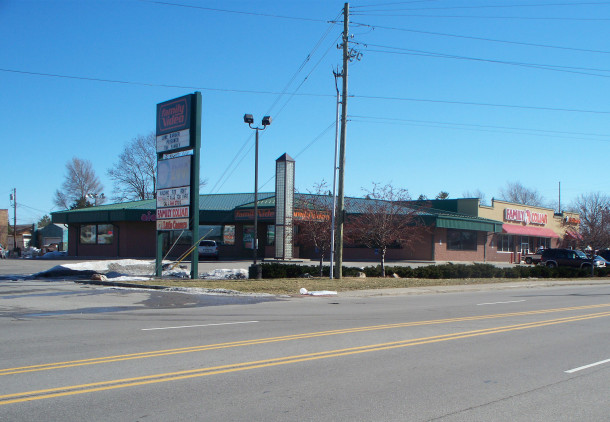