There is a beautiful stone bridge over Pleasant Run Parkway near Colorado Avenue.  Would you have any idea when it was built?  Local historians have researched to no avail, but they believe it was early to mid-1800’s. Would appreciate any information you might have. ~ Lisa L., Indianapolis

The stone structure that arches over Pleasant Run Parkway, Pleasant Run Creek, and Pleasant Run Trail did not always appear as it appears today.  Originally, there was a bridge that simply supported the train tracks as they crossed over the creek in its rural setting.  The farmland on either side of the railroad bed was not yet developed in the early years of the first bridge.  The boulevard was not created until more than three-quarters of a century later, and the greenway was not installed until well over a century later. 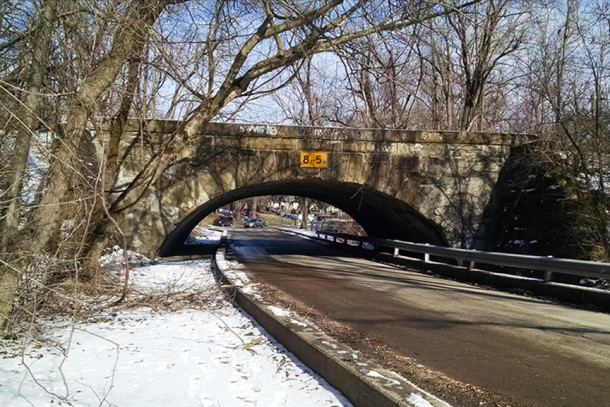 View of the Pleasant Run Parkway railroad bridge and vehicle underpass, from the southwest side of the stone structure     (2016 photo by Sharon Butsch Freeland)

In the 1850s, two separate sets of railroad tracks came together just east of Pleasant Run Creek.  They continued west, parallel to one another, into the heart of Indianapolis.  At the time they were built, the rails were owned by the Indiana Central Railroad and the Junction Railroad.  The names of the railroads have changed many times over the years, but the location of the tracks has remained the same for more than 160 years.

The land north of the two sets of railroad tracks was owned by Civil War General Abel D. Streight (1828-1892) and his wife Lovina McCarthy Streight (1830-1910).  The farm was out in the country when the Streights built their home after the Civil War.  The property had approximately 1,000 feet of frontage on the south side of the National Road, between Sherman Drive and Emerson Avenue.  After the area was annexed to the City of Indianapolis, the Streight home was assigned the address of 4121 East Washington Street. 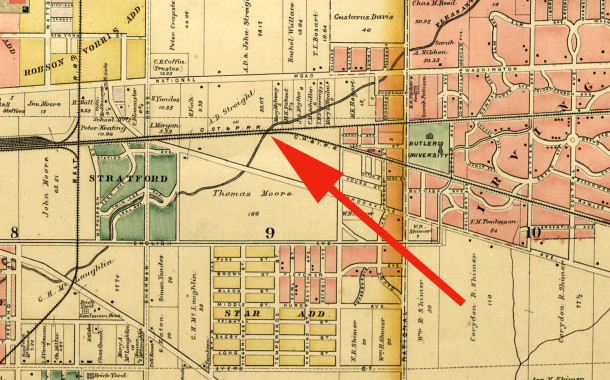 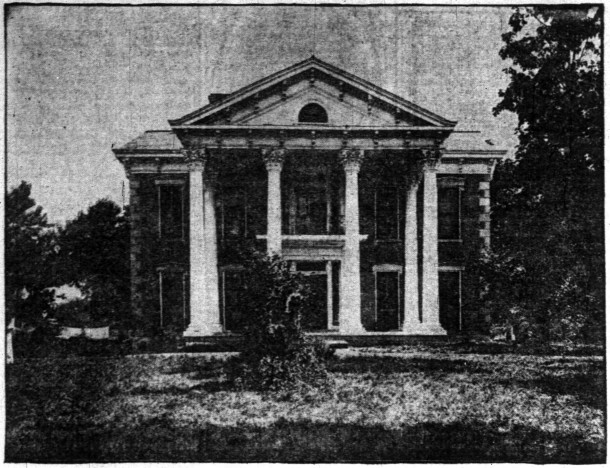 Newspaper image of Abel and Lovina Streight’s country home on the National Road between Indianapolis and Irvington (courtesy of newspapers.com)

In 1883, the City of Indianapolis sought to alleviate the flooding of Pogue’s Run by constructing a channel from Pogue’s Run to the spot where Pleasant Run and the two railroads intersected on the farm owned by the Streights. 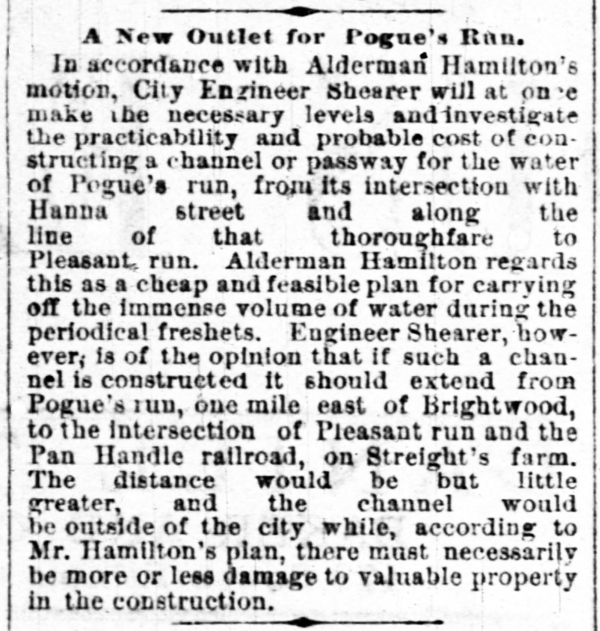 Abel Streight died in 1892.  His eccentric wife had the General buried in the front yard of their home on the National Road.  A decade later, she had his remains exhumed and reinterred at Crown Hill Cemetery. 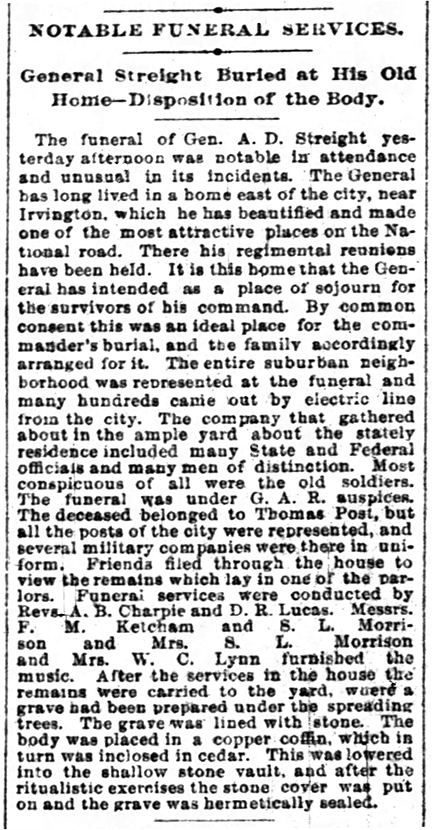 1892 funeral notice of General A. D. Streight appeared in The Indianapolis News      (courtesy of newspapers.com)

Following General Streight’s 1892 death, his widow and her sister continued to live on the property until Lovina’s death, eighteen years later.  There were no streets in the vicinity of the spot at which the railroad tracks crossed over Pleasant Run Creek during the years that the Streights owned the land adjacent to the bridge.

Lovina Streight passed away in 1910.  It was well-known among friends, neighbors, and veterans that both she and her husband had wanted their old homestead to be used for some useful purpose that would benefit Civil War soldiers and their wives, after the couple died.  However, Lovina’s will was contested and eventually overturned, after testimony by dozens of witnesses convinced the judge that she had been of unsound mind.  The Streights’ only child, John, died in 1905 and he had no children, so the heirs to the Streights’ estate wound up being Mrs. Streight’s sister and her descendants.  In 1915, the heirs sold the property to a real estate developer.  You can read more about the Streights in a 2015 Historic Indianapolis article by Stephen J. Taylor by clicking here. 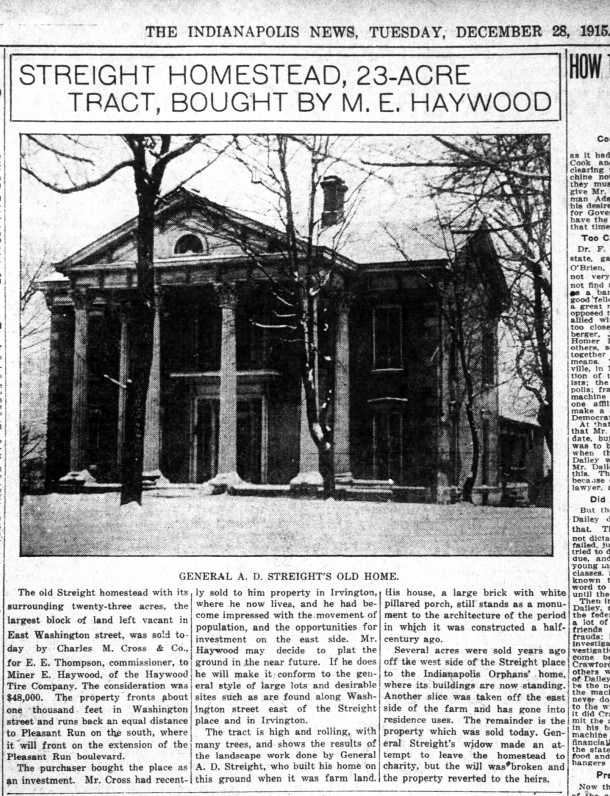 Late in 1916 or early in 1917, the Streight home and some smaller structures on their former land were demolished. City streets were then built south of East Washington Street, establishing a new neighborhood called the Haywood Boulevard Addition. 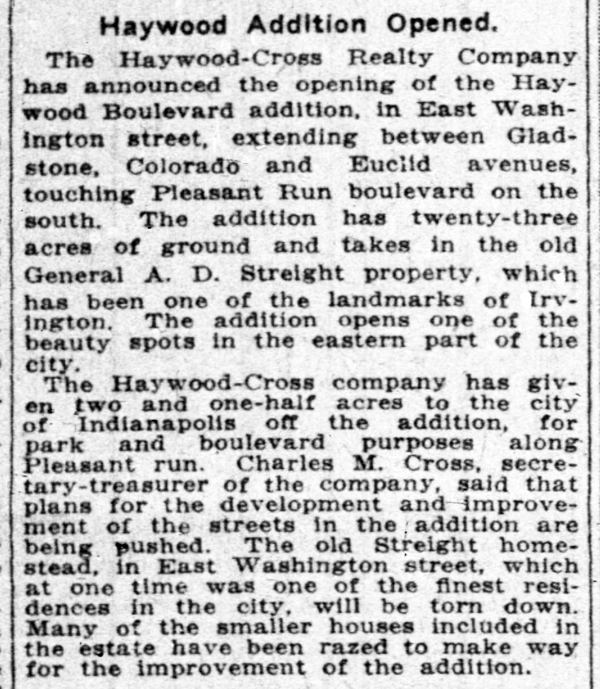 It was not until 1931 — fifteen years after the land was donated to the City — that plans were discussed to construct the one-and-a-half mile portion of Pleasant Run Parkway that now extends from about 5000 East Washington Street on the northeast end of the boulevard to about 3600 East English Avenue on the southwest end of it. 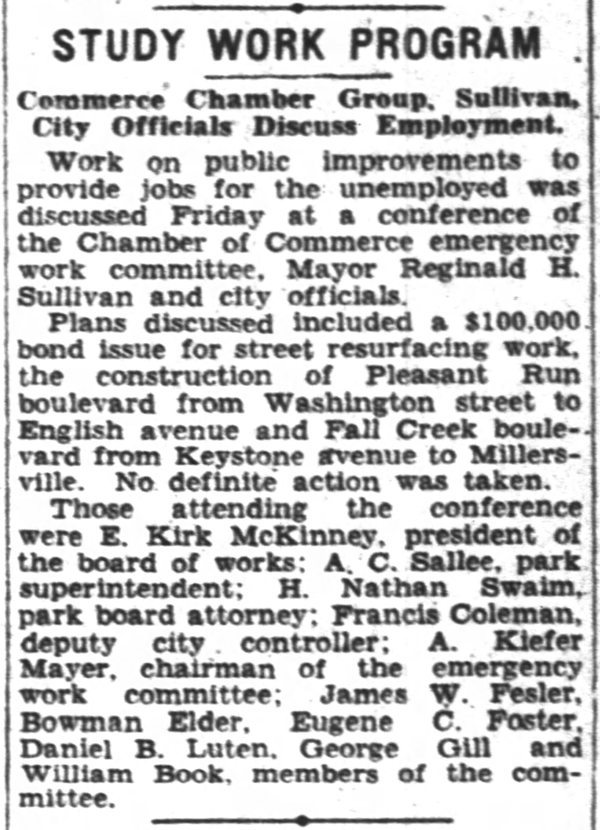 In 1932, an agreement was reached between the City and representatives of the railroads to build a temporary underpass for vehicles to drive beneath the train bridge. 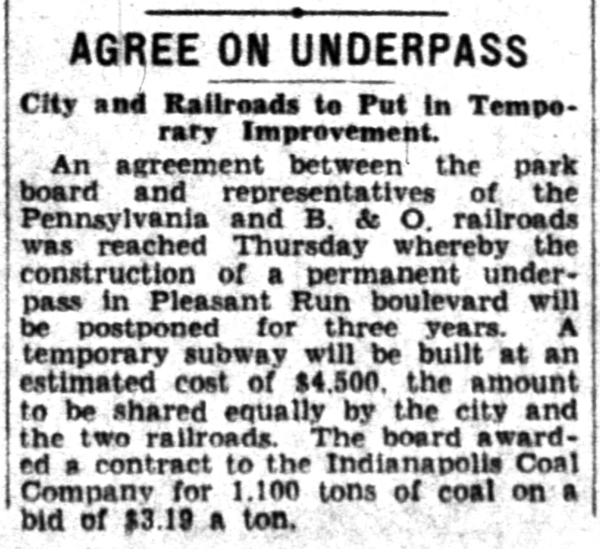 1932 Indianapolis News article indicated that city streets would be built beneath the underpass (courtesy of newspapers.com) 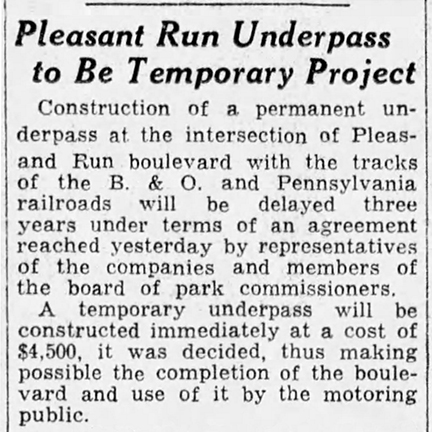 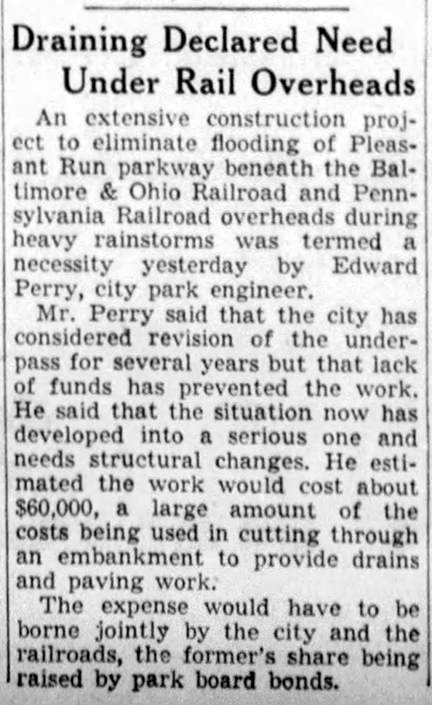 1937 Indianapolis Star article discussed the drainage problems around the creek (courtesy of newspapers.com)

A 1941 map indicated with dotted lines that a street leading to the underpass was proposed but not yet built, so the temporary underpass at the railroad tracks apparently was not completed until after 1941.

A 1945 newspaper photo of the railroad underpass resembles the shape of the stone structure that exists today.  By all reports, however, work on the underpass at that time was only a temporary fix that used the old bridge in its stopgap design. 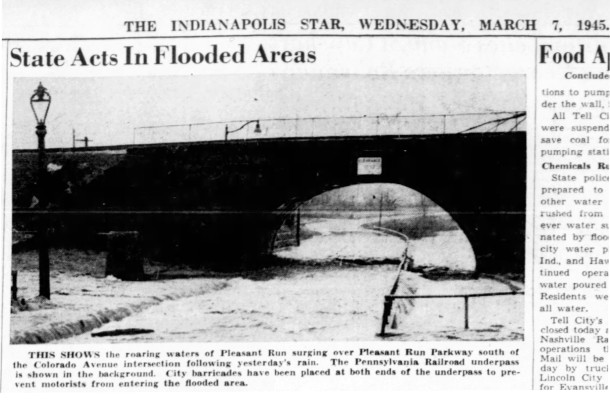 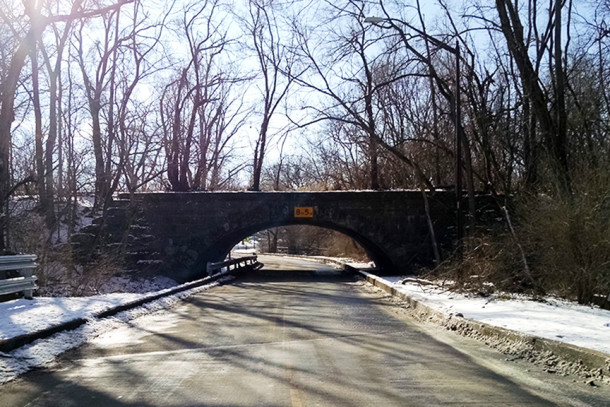 View of the Pleasant Run Parkway railroad bridge and vehicle underpass, from the northeast side of the stone structure  (2016 photo by Sharon Butsch Freeland)

The best clue as to when the present stone structure may have been built was contained in the caption of a November 27, 1958, Indianapolis Star news clipping that announced the reopening of the Pleasant Run underpass.  The caption stated that the new bridge, street, and concrete stream channel replaced a 75-year-old trestle that had been closed for two years.  If the previous structure was built in 1883 (1958 minus 75 equals 1883), then the previous bridge over the creek was erected when the Streight property was still undeveloped farmland.  There were no streets on the land at that time, nor were there any motorized vehicles in Indianapolis yet, so there would have been no need for an underpass in 1883. 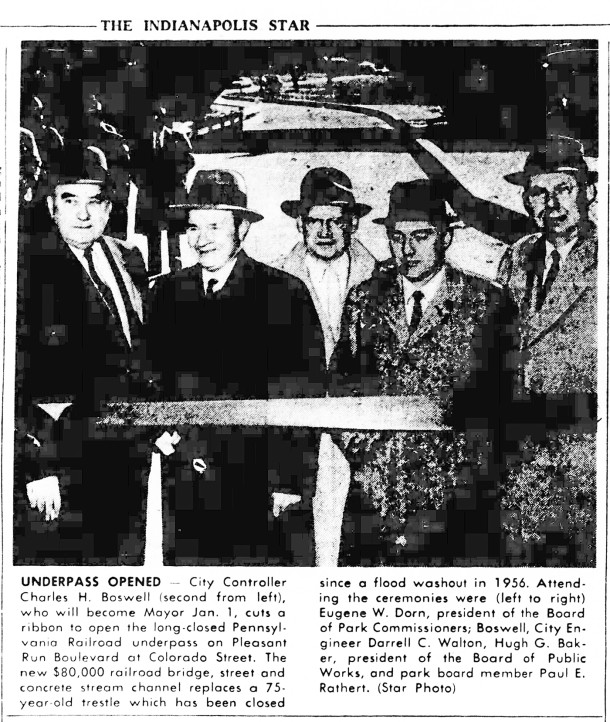 November 27, 1958 clipping from The Indianapolis Star announced the opening of the new Pleasant Run underpass (courtesy of newspapers.com)                   CLICK TO ENLARGE

Because the stone structure that survives today appears to be quite old, it certainly suggests that the structure at Pleasant Run Parkway and Colorado Avenue could date to the 1800s.  In addition to its venerable appearance, the bridge stands out among the other railroad trestles in the area that are less attractive, more utilitarian, and made of heavy metal.  Perhaps materials were salvaged from the 75-year-old bridge and reused in the new bridge.  Nonetheless, all indications are that the present bridge was built in 1958, which made it 57 years old in November of 2015.  It is apparently at least the third bridge to cross Pleasant Run at that location, since the railroad tracks were laid in the 1850s.

If any readers have information pertaining to the history of the Pleasant Run Parkway railroad bridge and vehicle underpass, Historic Indianapolis would appreciate hearing from you.  Please leave a comment below this article. 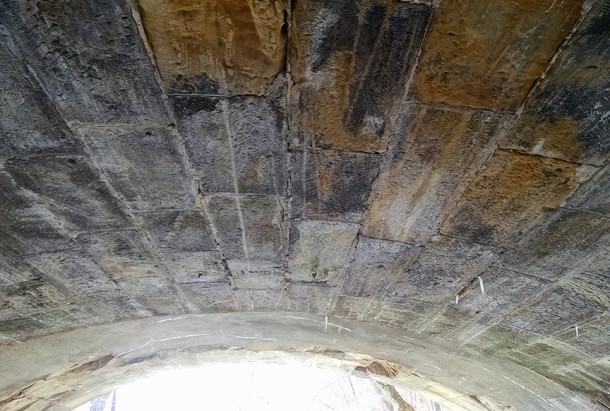 View of the Pleasant Run Parkway railroad bridge and vehicle underpass, looking up from inside the arched stone structure     (2016 photo by Sharon Butsch Freeland)

If you have a question about Indianapolis history, please e-mail it to historicindianapolis(at)yahoo(dot)com, with “HI Mailbag” in the subject line.  We will do our best to answer it.  Sponsors and Subscribers are given preference for extensive research on specific properties or families featured in HI Mailbag articles.  ~ Sharon