I played several different sports at Tabernacle Presbyterian Church back in the 1950s.  I remember hearing that Tab’s recreation program was one of the oldest and largest church-sponsored athletic departments in the country.  Can you provide a little history?  ~ Becky in Florida

Tabernacle Presbyterian Church’s Recreation Ministry can be traced back to the 1920s, soon after the church relocated to its present site at 418 East 34th Street.  Prior to that time, the congregation had been located at 1101 North Meridian Street for more than thirty years. 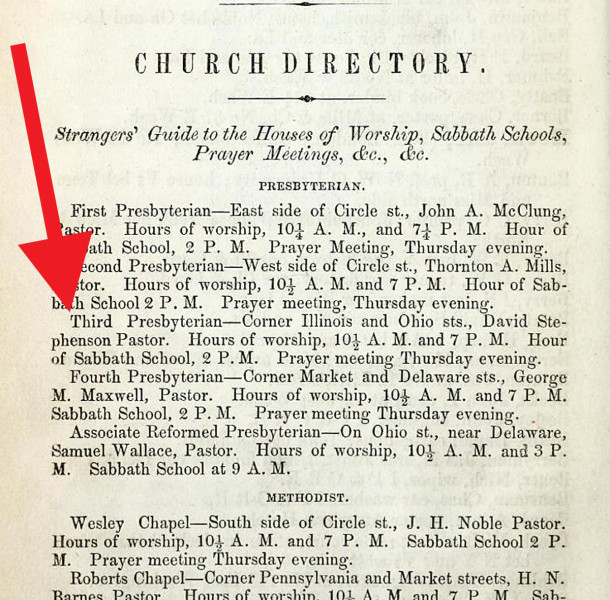 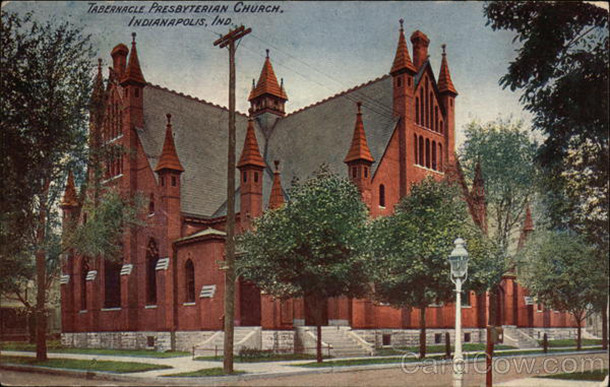 By the late Nineteen-Teens, Indianapolis’ residents began moving away from the core of the city to escape the noise and grime of living downtown.  The construction of several wide bridges over Fall Creek enabled families to live a few miles out from the center of town but still be within a reasonable traveling distance to and from work.  New homes were built, and commercial nodes began popping up every few blocks in areas that would later be called the Mapleton-Fall Creek , Butler-Tarkington, and Meridian-Kessler neighborhoods.

In 1918, Dr. J. Ambrose Dunkel (1871-1944) became Tabernacle Presbyterian Church’s new minister.  Dr. Dunkel felt the operation of Sunday Schools was one of the most important functions of a church.  In his ministry, he spent a great deal of his time calling on people in the growing neighborhoods north of the church.  There he found many children playing in the streets.  Realizing there was no Sunday School in the newly established areas north of Fall Creek, Dunkel prevailed upon Tabernacle’s leaders to find a rental property in which they could start a Sunday School.  Finding nothing suitable to rent, the church then purchased land on the northwest corner of East 34th Street and Central Avenue.  A one-story frame and stucco chapel that resembled a residence was constructed on the western portion of the 302-foot by 185-foot lot. 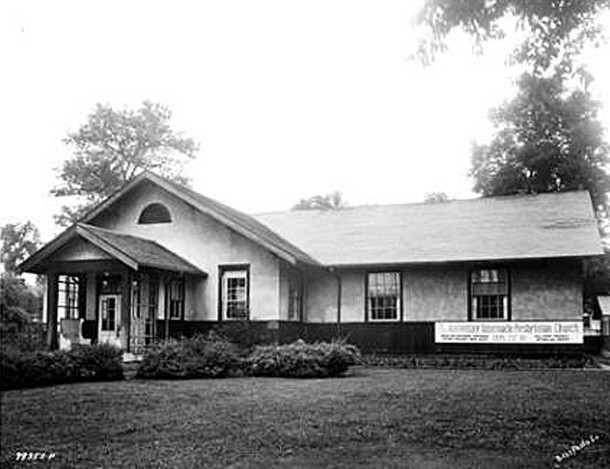 The Sunday School began operation in October of 1919.  This outpost of Tabernacle Presbyterian Church was originally conceived of as a form of community outreach.  Initially, the congregation had no thoughts of leaving its building at 1101 North Meridian Street.  However, by June of 1920, there were 500 children enrolled in the Sunday School, and by fall of the same year, there were over a 1,000!  The work of the church grew so rapidly at the new Sunday School location that Tabernacle’s members decided they should relocate all of the church’s activities and services there.  Soon plans were underway to build a magnificent new church.  It would be constructed in stages, beginning with the sanctuary on the east side of the lot.

The new church was designed by second-generation Indianapolis architect, Robert Frost Daggett Sr. (1875-1955), and Cleveland, Ohio, architect, John William Cresswell Corbusier (1878-1928).  Unfortunately, Corbusier did not live to see the completion of the entire structure.  The Bedford stone edifice is a wonderful example of Gothic Revival architecture, based on the methods and styles of building that flourished during the Medieval period.  The interior of the new building had all of the latest amenities and conveniences available at the time.  The Strathman Construction Company erected the building. 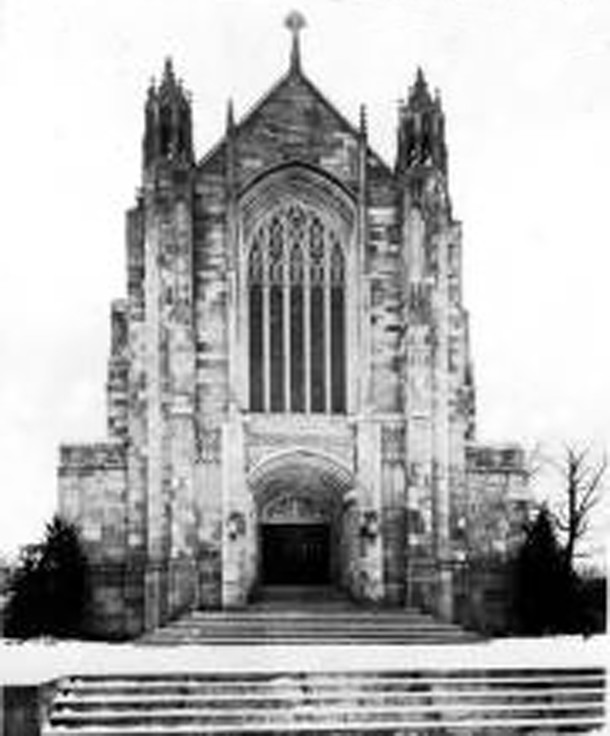 Ground was broken for the free-standing sanctuary in September of 1921.  Sixteen months later, the first phase of the new church was dedicated in a week-long celebration at the end of January and beginning of February, 1923.

The February 5, 1923, edition of The Indianapolis Star reported on the dedication of Tabernacle’s new building   CLICK TO ENLARGE

It was in the years just after the sanctuary portion of the building was completed that the seeds were planted for what became Tabernacle’s Recreation Ministry.  With about 2,000 young people attending the Sunday School in the structure to the west, and many families joining the beautiful new church, there was also an interest in recreational activities.  Soon, basketball and baseball teams were organized by Tabernacle members. 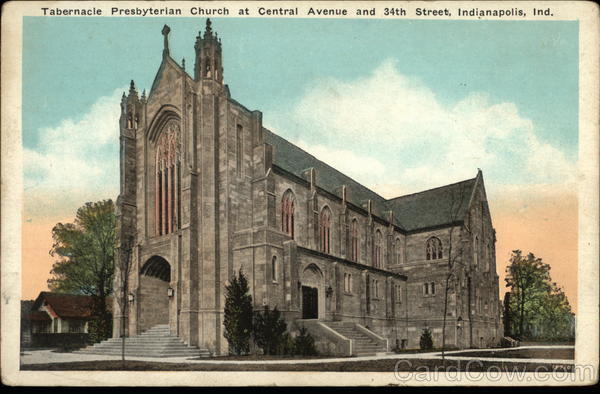 1923 postcard of Tabernacle Presbyterian Church’s new sanctuary, with the Sunday School building still standing to the west of it           (CardCow.com)

Meanwhile, construction began on the two remaining sections of the building, one of which included a gymnasium, restrooms, and showers.  The building was completed in October of 1929.  In that same year, Tabernacle member John Dwight Peterson (1897-1990) assumed the responsibility of officially establishing the Recreation Ministry. 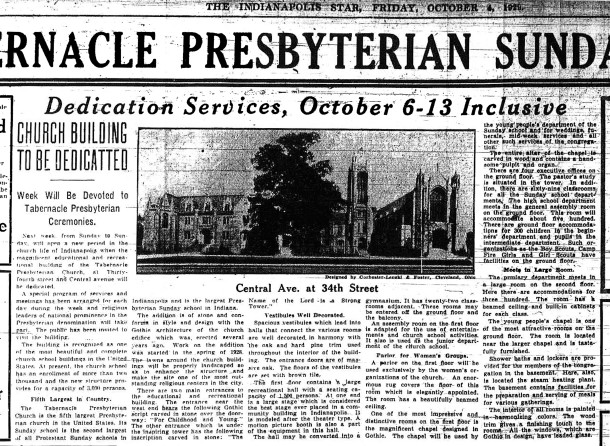 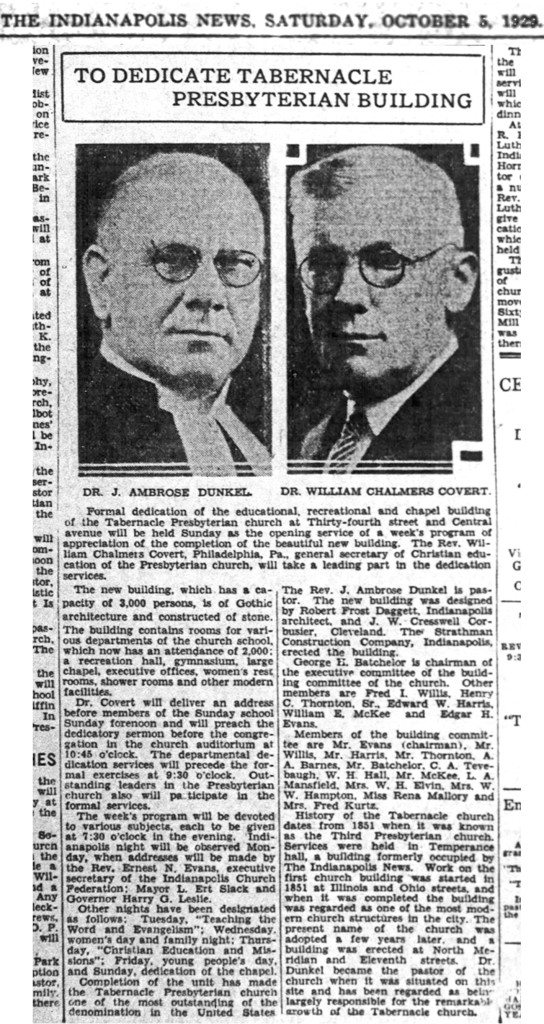 The October 5, 1929, edition of The Indianapolis News discussed the dedication of the new additions              CLICK TO ENLARGE 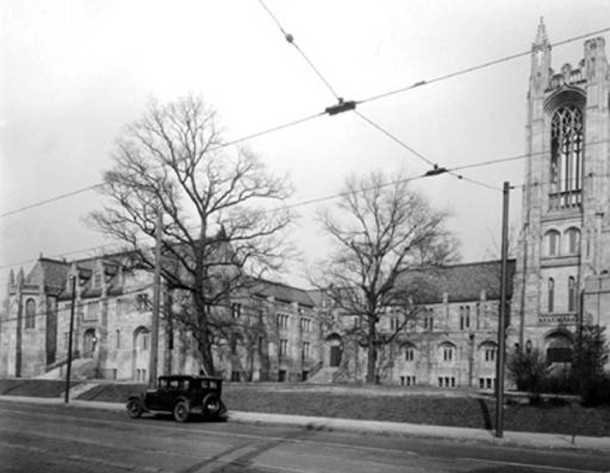 In the early years of the recreation program, Tab’s athletic teams were comprised of church-sponsored players and played other churches’ teams.  Sometime in the 1940s, however, the activities were opened up to all young people who wanted to play sports, regardless of their religious affiliations.   Tab Rec also began to add athletic activities for girls in the summer of 1948, with the formation of girls’ softball teams. 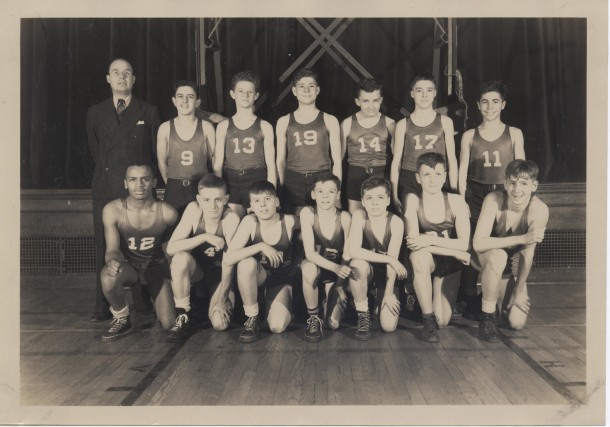 As the recreation program grew, there was a need for more land on which outdoor athletic activities could be played.  The 1.3 acres originally purchased by Tabernacle Presbyterian Church for the Sunday School chapel was completely covered by the building after all three sections of the new church were built.

At a congregational meeting on July 21, 1941, authorization was given to Tab’s Trustees to purchase the 1.2-acre tract of land directly west of the church.  That purchase was completed late in 1941 or early in 1942, and that parcel of unimproved land became the athletic field.  It was named Evans Field in honor of Mr. and Mrs. Edgar Hanks Evans, who were major contributors of the funds for its purchase.  Several generations of the extended Evans family  (surnames of Evans, Harrell, and Stout)  owned and operated the Acme-Evans Company, which manufactured E-Z-Bake Flour.  You can read about the Acme-Evans Company in a Historic Indianapolis “Sunday Adverts” article here. 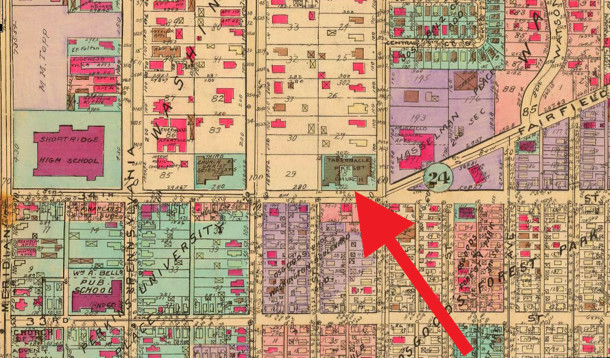 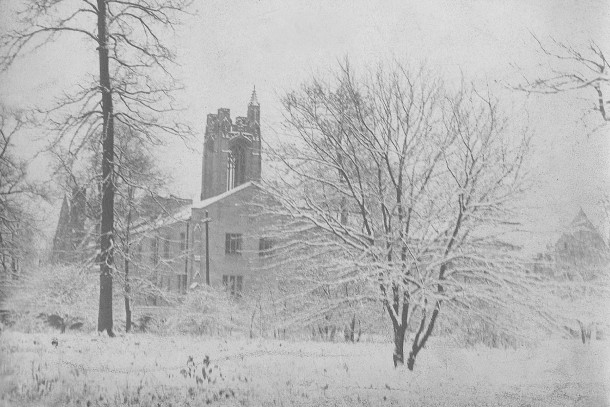 In 1942, Tabernacle Presbyterian Church acquired the land west of the church, which was cleared and became the ball fields    (photo: Tabernacle Recreation Ministry)

For many years, Tab was one of the few places in the city that grade school and high school age girls could play sports.   It’s hard to imagine now, but athletic programs for girls did not exist in the public or parochial schools until the final decades of the Twentieth Century. 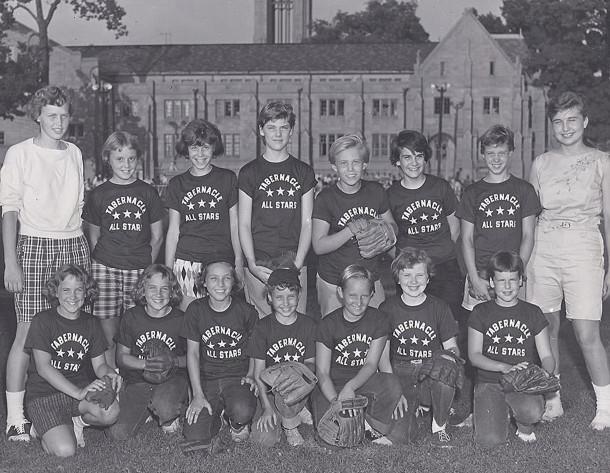 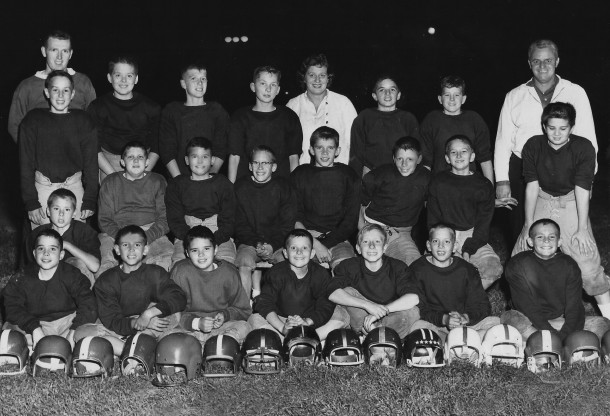 In the 1960s, many of the urban neighborhoods that had been established prior to 1930 began to deteriorate, and there was a great exodus of families to the suburbs.  Tabernacle Presbyterian Church made the decision to remain in the neighborhood, while many other churches moved out.  In conjunction with its commitment to stay in the area, Tabernacle instituted a soup kitchen, food pantry, and tutoring program, in addition to its already existing mission projects.  For the past several years, the senior pastor has been Reverend L. John Gable.  The associate pastor is Oscar Clavel. 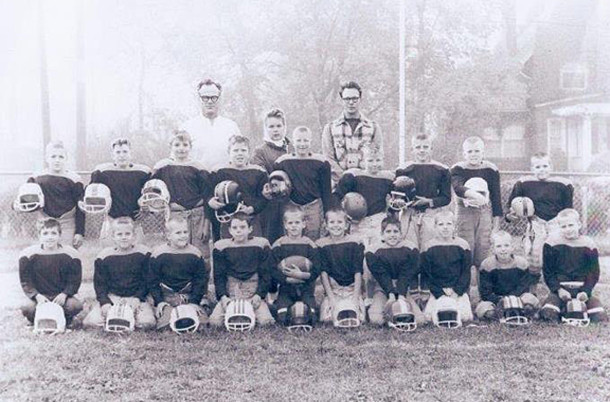 Today, Tab Recreation is an inner-city youth program that offers children ages 5-15 an opportunity to play sports.  The emphasis is on the importance of faith and fitness.  Hundreds of youths pass through the program every year.  Tab Recreation has developmental competitive leagues in football (both flag and tackle), basketball, soccer, track, cheerleading/dance, chess, and wrestling. 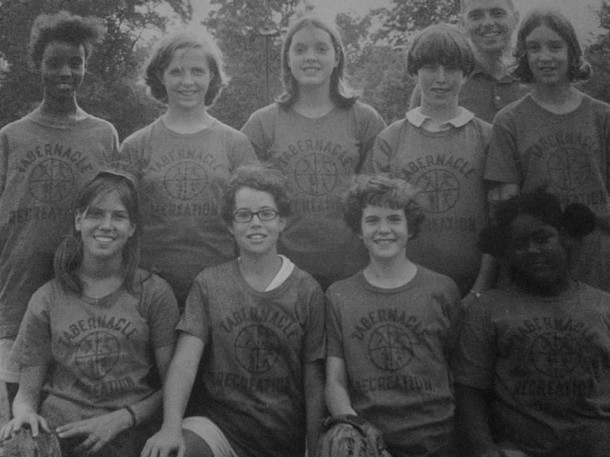 Over the 90 years since a recreation ministry was first established, there have been ten Recreation Directors.  In chronological order, the past directors were James B. Martin,  LeRoy Allen,  Ralph W. Smith,  Tom Wadsworth,  Frank Hamilton,  Guy Tex,  Marion Max Allen,  Russell W. Earl,  and John Byers. The person who held the position the longest was the much-loved Russ Earl (1925-1993), who was recreation director from 1951 to 1985.  The current Recreation Director is Ben Hughes. 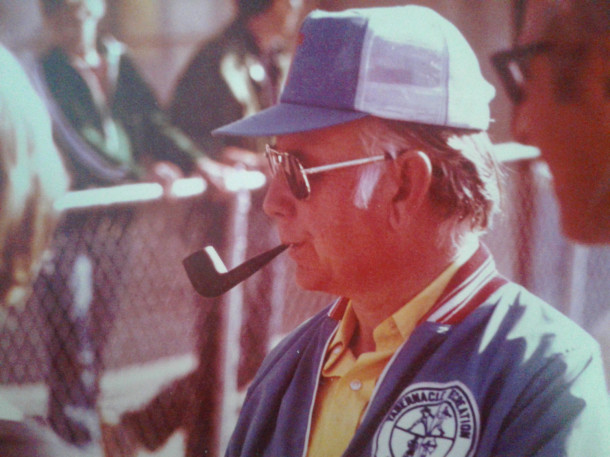 Tabernacle Presbyterian Church’s Recreation Ministry will host a 90th Anniversary Celebration on Saturday, September 13, 2014, from 11 a.m. until 2 p.m.  Anyone who played, coached, refereed, or just stopped by to watch a game is invited to attend.  The church is also seeking photos of Tab Rec activities from years gone by, which you are encouraged to e-mail to dave.streit@tabpres.org. 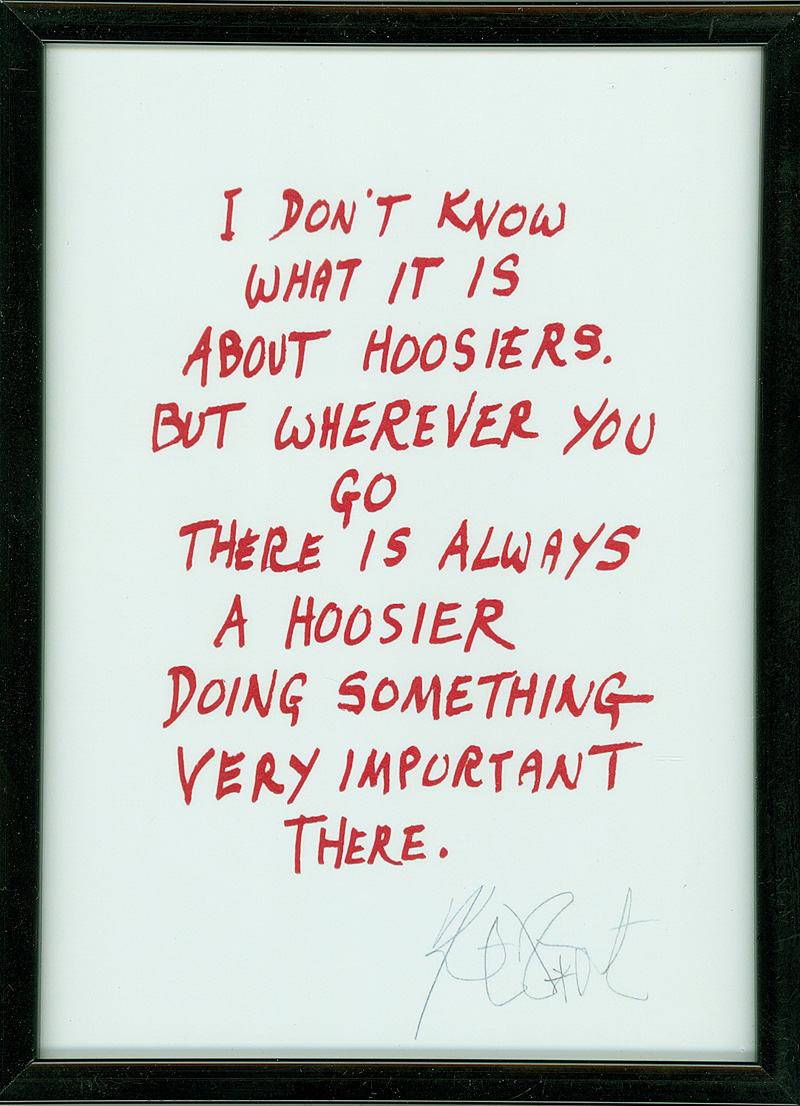 HI Mailbag: Interesting People Who Were From Indianapolis