Have you come across any information about Crown Hill Cemetery and the Mustard family?  My mother (age 92, with an excellent memory!) has always “recited” a family fact that, “Uncle Walter married the woman who owned Crown Hill Cemetery.” After Googling Crown Hill, it appears this clearly isn’t the case. However, Fannie Mustard Johnson was the granddaughter of James Mustard, who apparently owned a large amount of land around Indianapolis.  ~ Barbara Mackenzie, Rohnert Park, CA

There were eight original patent holders of the parcels of land that would one day become Crown Hill Cemetery.  All of the owners bought their acreage from the federal government in the same year, which was 1822.  The purchasers were Abraham Barnett, Joseph Hanna, Thomas McQuat, William Nugent, William D. Rooker, William Sanders, Levi Wright, and Noah Wright. 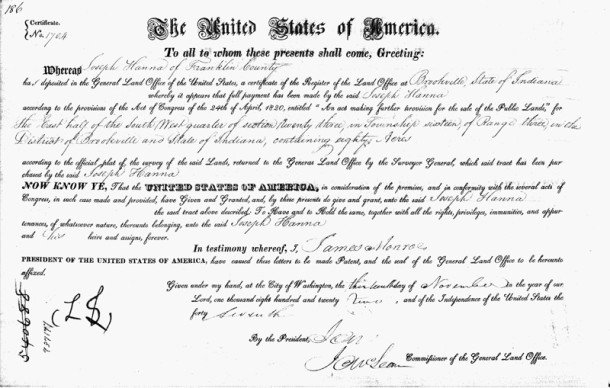 Over the years, most of the initial owners sold their properties.  By the time an updated map of Marion County was produced in 1855, the title holders of those eight parcels were John Armstrong, U. Blue’s Heirs, Bennett Byram, Moses Foley, Noah Noble’s Heirs, Peter Ruark, Martin Williams, and Levi Wright.

In 1863, Crown Hill Cemetery was incorporated, the ownership had changed quite a bit, again.  The initial parcels of land that were purchased to establish the cemetery were owned at that time by farmers Jonathan Wilson, Martin Williams, and James Trueblood.  By year’s end, the cemetery’s first superintendent and his family moved into a cabin on the cemetery grounds.  In the spring of the following year, 1864, the cemetery was dedicated, and the first burial was conducted on the following day. 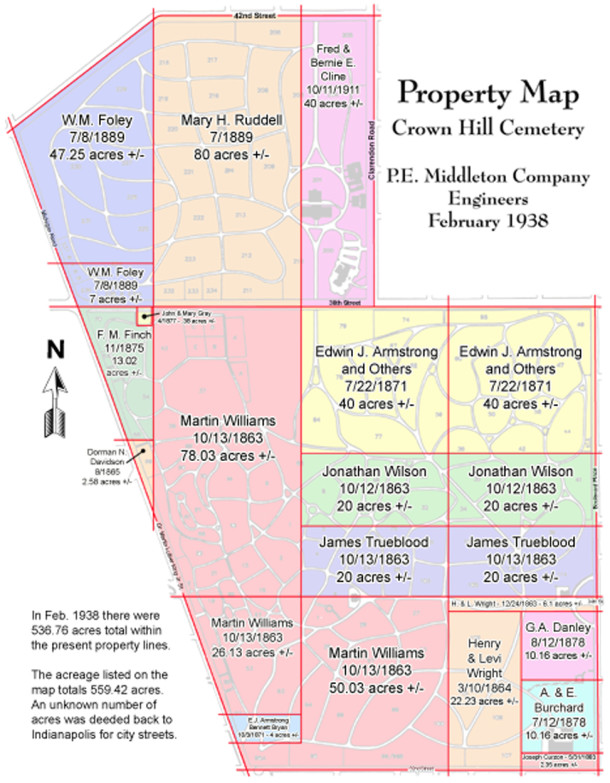 Fannie Mustard Johnson was born in 1871.  Since most of Crown Hill’s land purchases were made either before Fannie was born or when she was still a minor, it does not seem possible that Fannie could have owned property that became a part of Crown Hill Cemetery.  Neither does it appear that anyone named Mustard or Johnson was involved in any of the cemetery’s acquisitions. 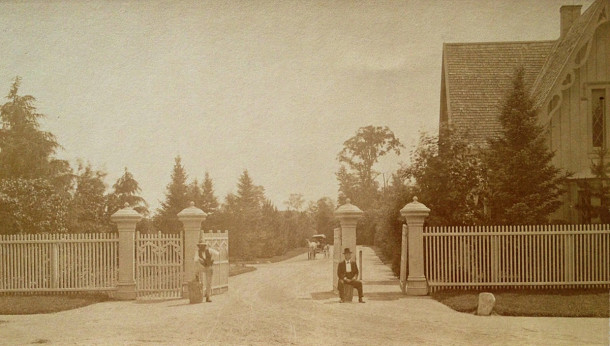 According to several published histories, the Mustard family came to Marion County, Indiana, in 1834, from Washington County, Pennsylvania.  The patriarch of the family that settled here was James Mustard (1797-1841).  James had two sons and four daughters by his first wife, Dorothy Swartz Mustard (1796-1827), and five sons by his second wife, Elizabeth Craig Goble Mustard (1797-18??).  James Mustard purchased about 250 acres directly south of the towns of Broad Ripple and Wellington.  This is the only land I could find that the elder James Mustard owned before he passed away in 1841.  At the time an 1855 map of Marion County was published, the land was owned by J. Mustard’s Heirs. 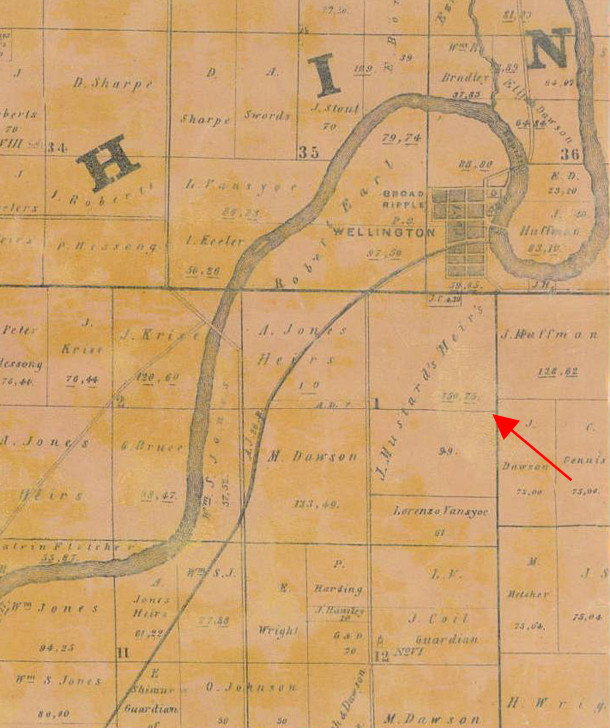 At the time the next available map was printed in 1889, the Mustards had acquired additional parcels of land in Washington Township, totalling nearly 400 acres.  As the population of Indianapolis grew, the areas north of the city limits of 38th Street became more and more desirable.  By the 1920s, most of the land owned by the Mustards had been developed.  The parcels north of the White River became the Arden neighborhood, Sherwood Village, a portion of the Town of Meridian Hills, and Marott Park.  The parcels south of the White River became various smaller housing additions in what are now the Meridian-Kessler and Butler-Tarkington neighborhoods. 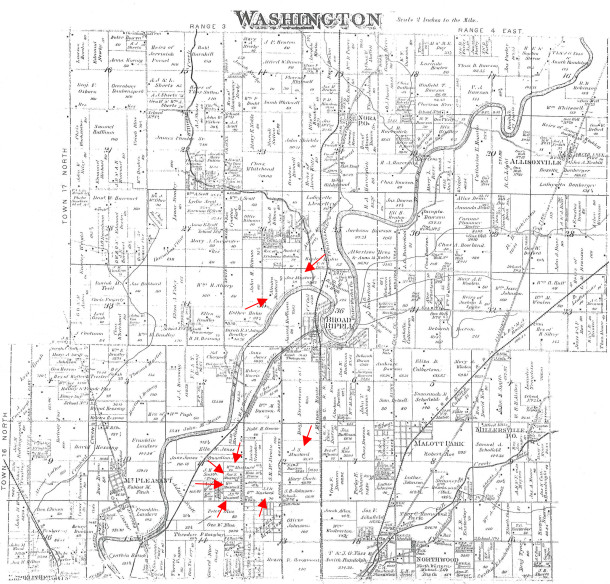 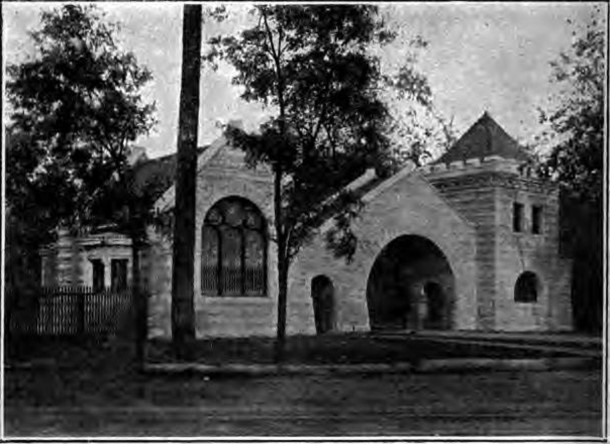 Although there may well be descendents of the 19th-century Mustards who still own property in Washington Township today, there is no longer anyone with the surname of Mustard living in the area.  About the only structure still standing that keeps the Mustard name alive is the former Masonic Lodge at 6235 Guilford Avenue.  The three-story brick building was erected in 1907 with a gift of $25,000, which was left to the Broad Ripple Lodge by Jacob S. Mustard in his will.  The edifice was named Mustard Hall in his memory.  Jacob died on August 20, 1904.  Jacob’s wife, Cassandra Coil Mustard, died on September 21, 1920.  Cassandra was the daughter of Jacob Coil, the man credited with founding Broad Ripple in 1837.  They are buried together in Union Chapel Cemetery, about which there was a recent Historic Indianapolis article here.  Although the 106-year-old Broad Ripple Village landmark is now privately owned and no longer serves as a Masonic lodge, many locals still refer to the building as Mustard Hall. 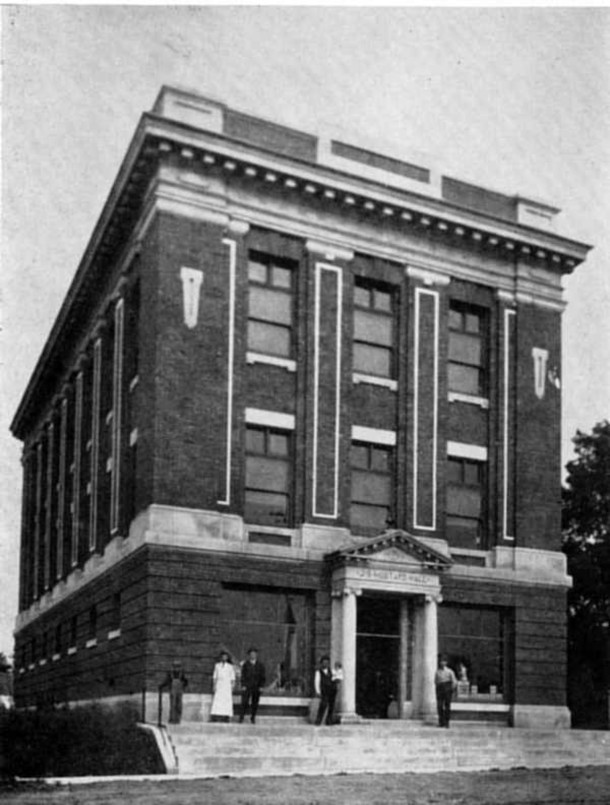 Mustard Hall was built in 1907 by the Masons with a donation of $25,000 left to the organization by Jacob S. Mustard      (photo courtesy of Alan Hague, from 1968 “A History of Broad Ripple” by Junior Historical Society and The Riparian)