I lived all my childhood in the 2400 block of S. Randolph St.   On every corner was the name of the street in the sidewalk.  But on our street it said Nelson.  I know there is a Nelson not too far from there.  Could someone tell me why they had the wrong name on it?  ~ Barbara B., Indianapolis

The City of Indianapolis was laid out in 1821, in a mostly symmetrical grid that was only one square mile in size.  When areas outside the original Mile Square were established, the people in those settlements named the streets according to their own conventions.  Sometimes the street names were consistent with Indianapolis streets, but often they were not.  Street names might have reflected the name of a former farm’s owners (e.g., Tinker Street), a prominent local family at the time of a neighborhood’s establishment (e.g., Martindale Avenue), a famous person in U.S. history (e.g., Lincoln Lane), a famous person in world history (e.g., Bismarck Avenue), or a physical feature of the locale (e.g., Maple Road). 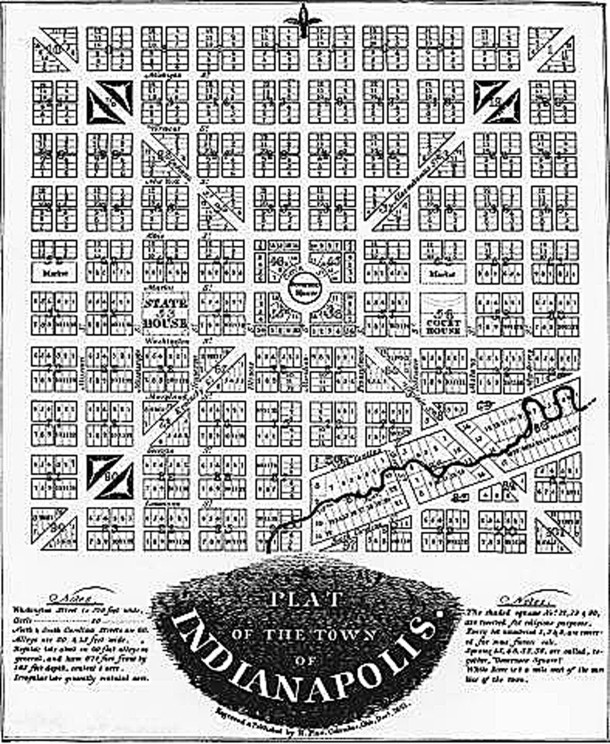 The first appearance of Randolph Street in an Indianapolis City Directory was in the 1877 edition.  At that time, Randolph Street only went north of East Washington Street.  It did not extend south of Washington Street for the first four decades of its existence.  Randolph was only about half-a-mile in length and ended at Michigan Street, which is the southern border of Woodruff Place.  In the 1877 city directory, Randolph was listed as being 900 East; however, an address in the 900’s in 1877 was not the same as the 900 block of East Washington Street today.  Properties in the 900 block were renumbered to addresses in the 1900’s by the end of the 1800’s. 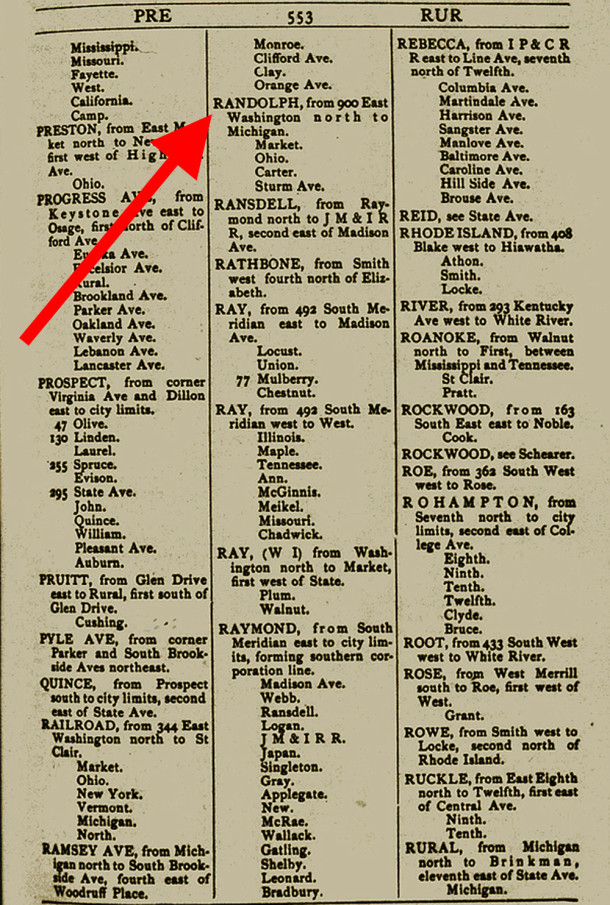 The first appearance of Randolph St. in an Indianapolis City Directory was in the 1877 edition 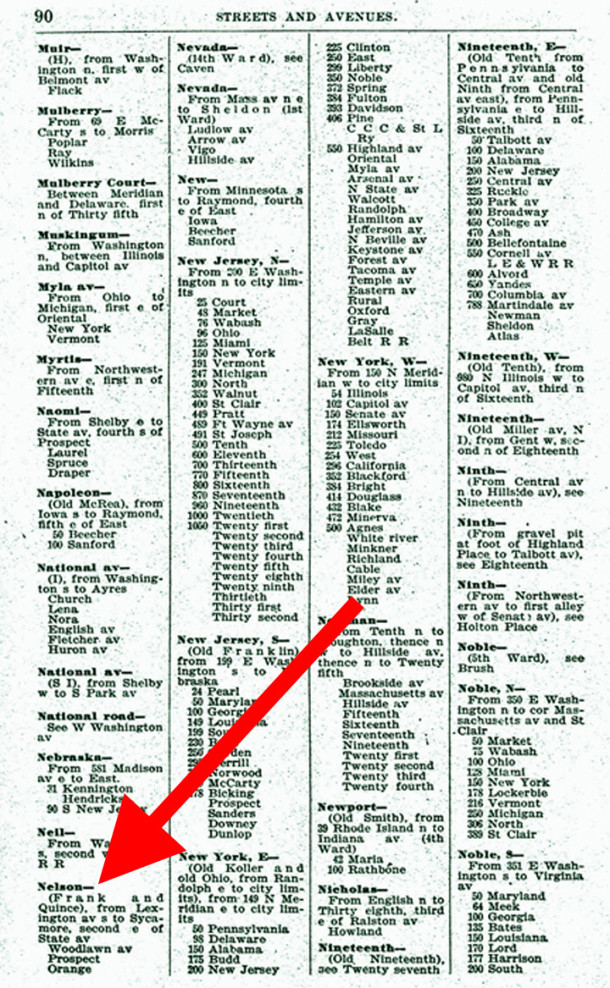 The first appearance of Nelson Ave. in an Indianapolis City Directory was in the 1897 edition 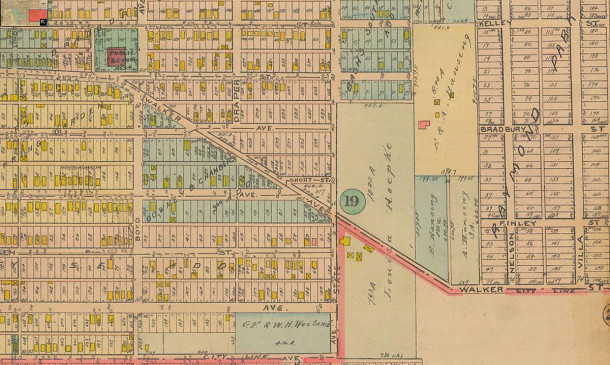 The 1916 Baist Atlas shows Nelson Ave. running north and south in the location that is now known as Randolph St.     (map courtesy of IUPUI Digital Archives)       CLICK TO ENLARGE

As the city’s boundaries expanded to encompass previously remote areas, the street names in the outlying neighborhoods needed to be consistent with the street names of the City of Indianapolis.  In addition, the numbering of homes and businesses was not always in logical order, once an area formerly remote from the core of the city was connected to it.  Beginning in 1897 and continuing through the 1920s, several projects were initiated to make the street names more consistent and the numbering system sequential.  Randolph Street and Nelson Avenue were involved in that effort to standardize names and numbers. 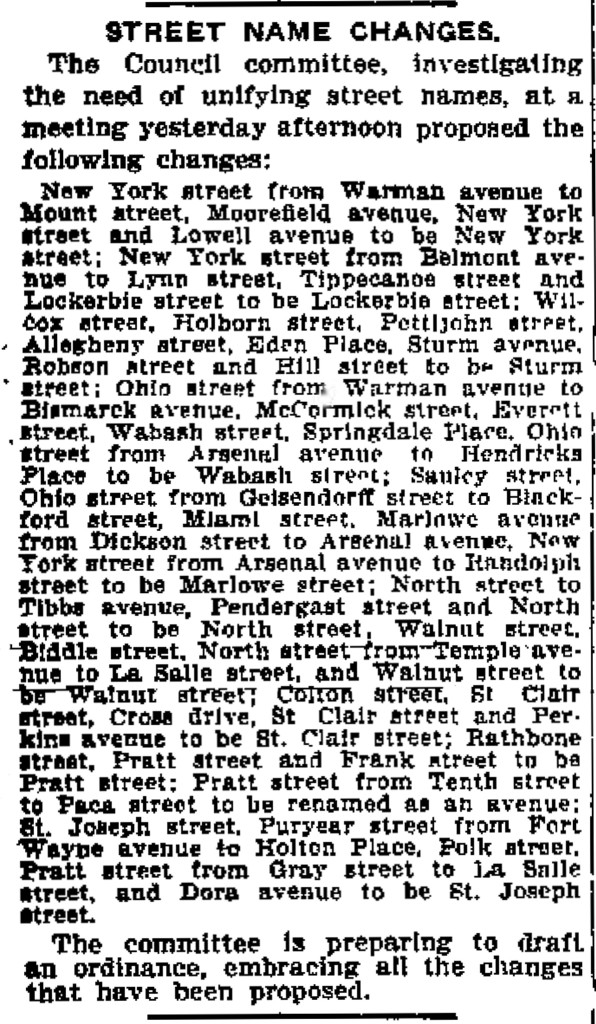 Even the merchants got into the act.  They supported the updating of the street names and numbering, so that deliveries from their businesses could be made more easily. 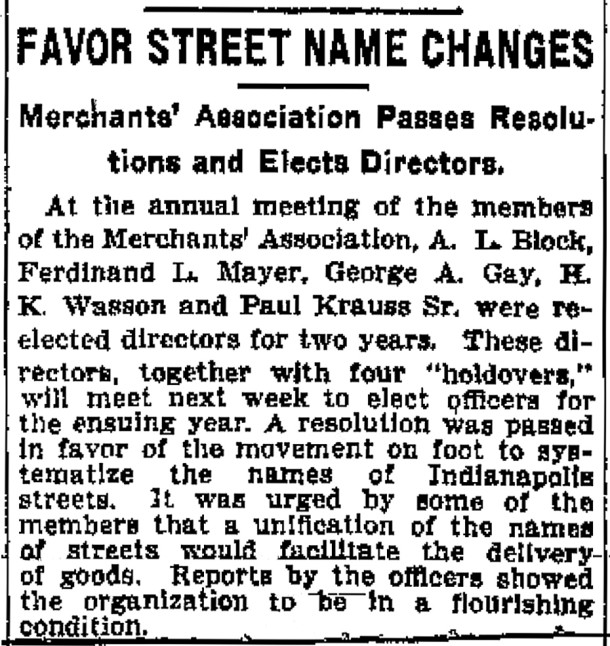 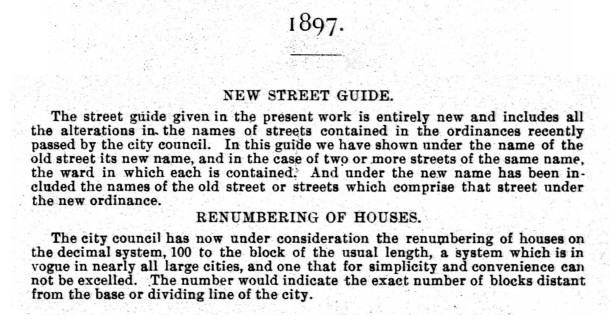 The final time Nelson appeared with a north-south orientation in a city directory or on a map was in 1919.  As Nelson Avenue, which was only south of Washington Street, was almost in line with Randolph Street, which was only north of Washington Street, the City of Indianapolis decided to change the name of Nelson Avenue to Randolph Street.  Randolph was a much shorter street than Nelson, distance-wise, but it would appear the Randolph name prevailed because it was the older of the two thoroughfares.  Meanwhile, the name of Nelson Avenue was reassigned to an east-west street near Garfield Park that had been previously called Holliday Avenue.  These name changes had to be approved by the Indianapolis Common Council, an elected body that was comparable to today’s City-County Council.  Their proceedings can be viewed at local libraries, as well as online.  Unfortunately, the 1919 Journal is missing from the Indianapolis Public Library’s collection. 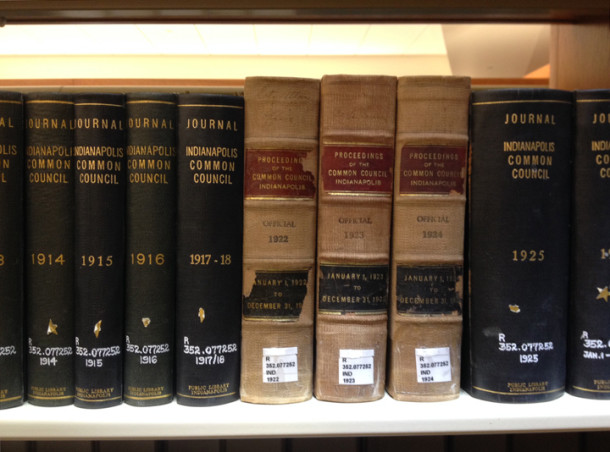 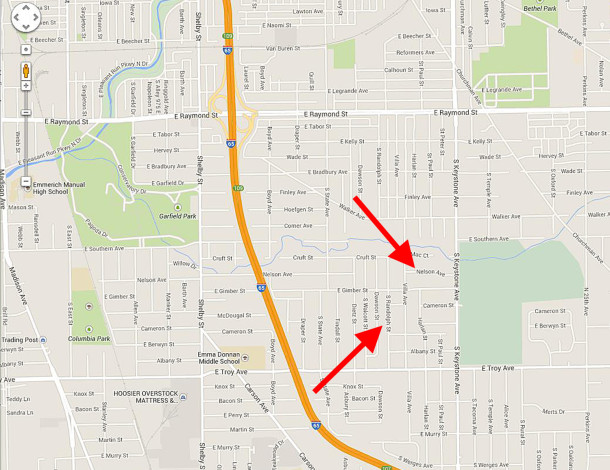 As of 1919, Randolph Street and Nelson Avenue became separate streets and were perpendicular to one another   (scan courtesy of Google maps)         CLICK TO ENLARGE

However, there are still some remnants of street names embedded in sidewalks around town.  Below are some examples of sidewalks that still have street names on or in them.  The first one is an example of a ceramic street name mounted on top of the concrete in the Meridian-Kessler neighborhood.  Note that the V and D in the abbreviation for Boulevard were mistakenly reversed.  The tiles have been this way for a century! 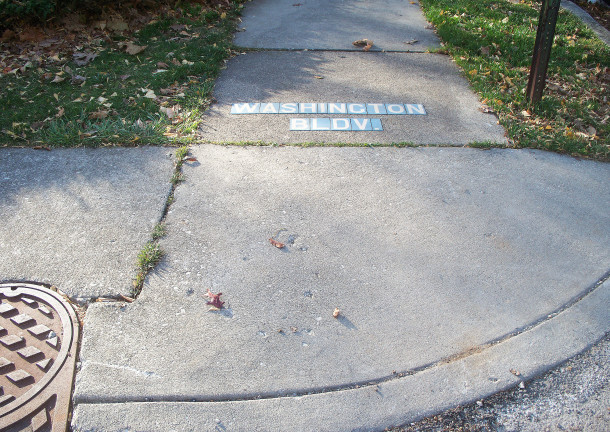 An example of a street name embedded in the sidewalk still exists at the corner of E. 43rd St. and Washington Boulevard   (photo by Sharon Butsch Freeland) 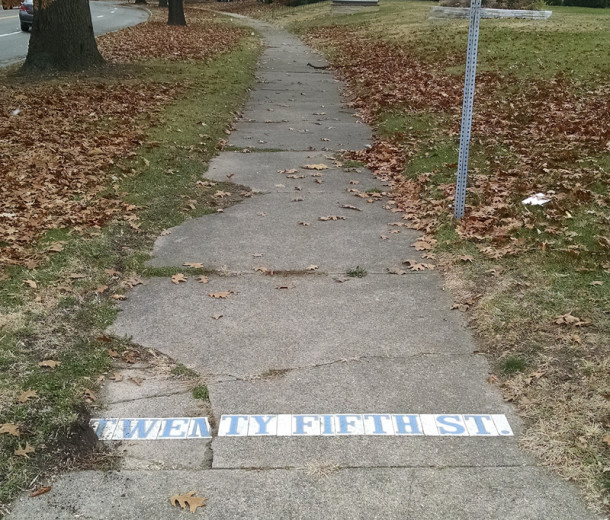 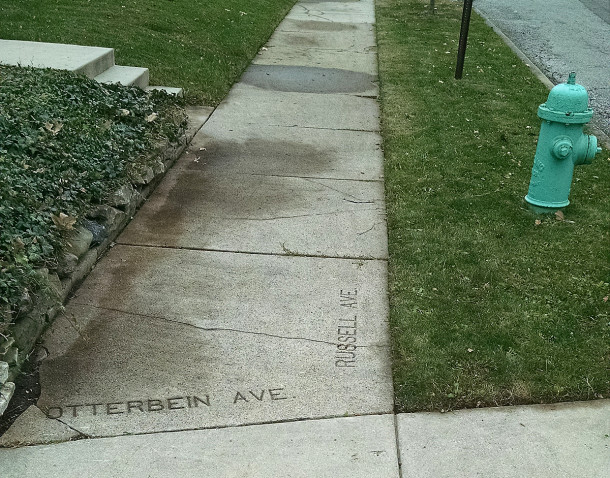 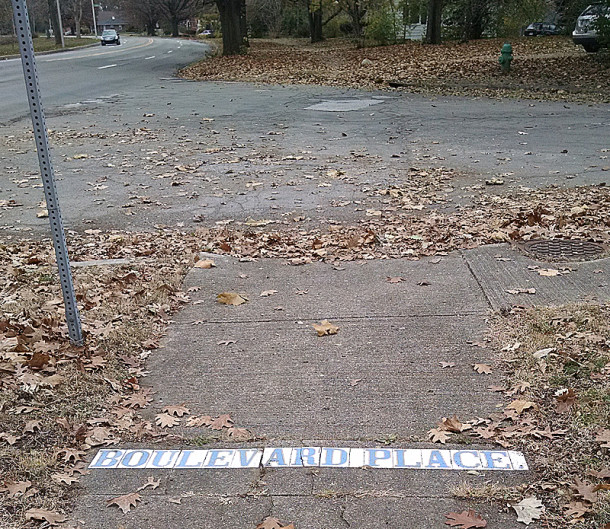 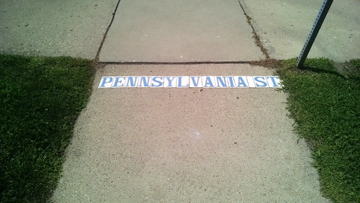 Tiles still exist in the sidewalks on the northeast corner and the southeast corner of East 37th Street  and N. Pennsylvania Street   (photo by Sharon Butsch Freeland)

If HI readers are aware of any sidewalks that still have street names in them, please leave a comment below, indicating their locations.  HI would appreciate knowing where these artifacts of older neighborhoods still exist, so that photos may be taken before they completely disappear.