What can you tell me about the residence that once stood in the 2800 block of North Meridian Street and served for many years as the headquarters of the International Typographical Union?  ~ Manny B., Indianapolis

The residence that formerly stood at 2820 North Meridian Street graced the landscape along the prominent northside thoroughfare from 1906 until 1965.  The commercial building that replaced the demolished home was completed early in 1967.

The residence was built by Frank Van Camp (1863-1937), the youngest of the six children of Gilbert Cortland Van Camp (1817-1900) and wife Hester (Raymond) Van Camp (1828-1912).  Gilbert Van Camp was the founder of the eponymous canning and packing company, whose origins date to 1862.  Van Camp & Sons Canning and Packing Company partnered with Stokely Brothers in 1933 to become the Stokely-Van Camp Company. 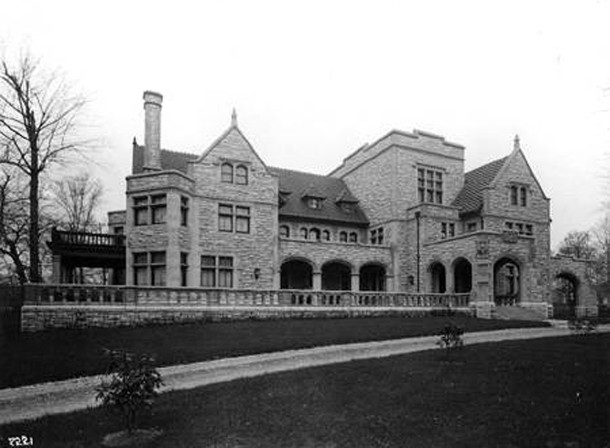 A young Frank Van Camp is credited with being the person who conceived of the distinctive flavor of Van Camp’s Pork and Beans in 1894.  Thinking the beans by themselves were bland, Frank added some ketchup and bits of bacon to them.  The result was a big hit with customers.  By the end of the 19th century, the company had six plants around the country.  Those same ingredients are still used today.  You can read more about Van Camp products in a 2011 Historic Indianapolis article here.

After Gilbert Van Camp’s death in 1900, Frank took over the reigns of Van Camp & Sons Canning and Packing Co.  Frank’s older brothers, Cortland and George, had left the family business to start the Van Camp Hardware and Iron Company.  The popularity of Van Camp’s Pork and Beans made Frank a wealthy man.  He decided to demonstrate his success by building his family a magnificent mansion.  In 1906, a 43-year-old Frank Van Camp and his wife Clarissa (Lintner) Van Camp (1865-1914), along with their teenaged children, Gilbert and Marguerite, moved into their new home just north of Fall Creek.

An article in The Indianapolis News on November 22, 1906, describes the reception thrown by Mrs. Clarissa Van Camp    CLICK TO ENLARGE 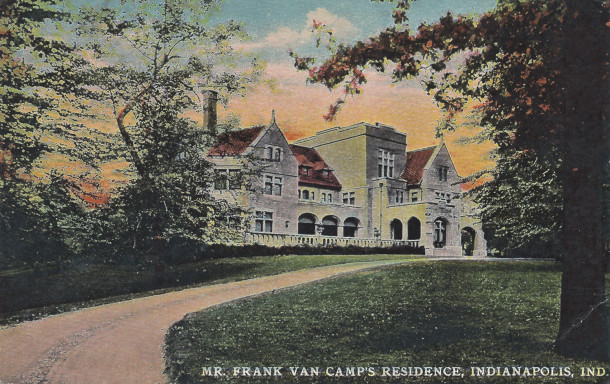 In 1914, Frank’s beloved wife Clarissa died at only 49 years of age.  By the time the 1915 Indianapolis City Directory was published, the home at 2820 North Meridian Street was listed as vacant.  Frank Van Camp moved to Los Angeles, California, where he remained for the rest of his life.

From 1915 to 1921, the former Van Camp mansion was home to Samuel T. Murdock (1870 – 1921), his wife Addie (Gordon) Murdock, and their grown children, Alexander and Alice.  Sam Murdock owned the Capitol Warehouse Company at 213 East South Street.  After Samuel’s death in 1921, Murdock’s widow continued to live at 2820 North Meridian Street for about three more years. 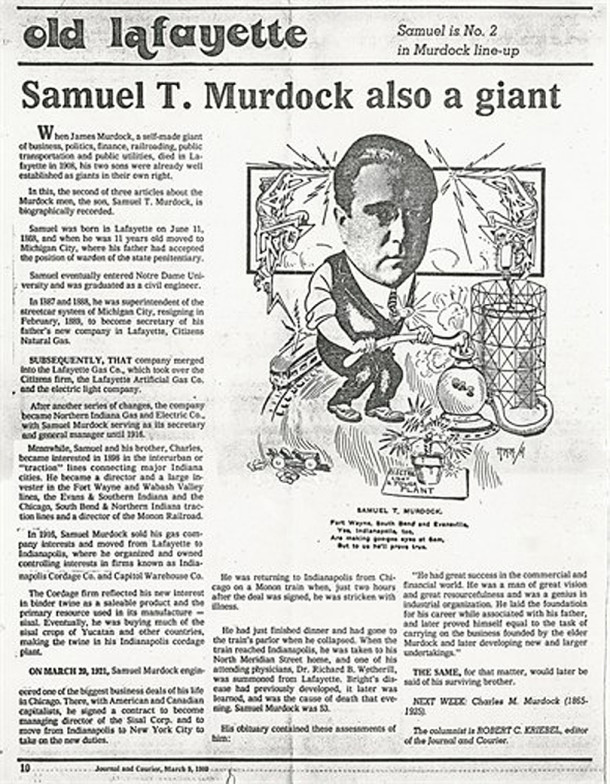 By the time of the 1925 city directory, the Van Camp/Murdock home had its third and final occupant.  However, the mansion no longer functioned as a private residence.  The adaptively reused property became the national headquarters of the International Typographical Union.   The organization operated in the opulent surroundings of its unique office setting for nearly four decades.  Union officials dubbed the facility “Typographical Terrace.” 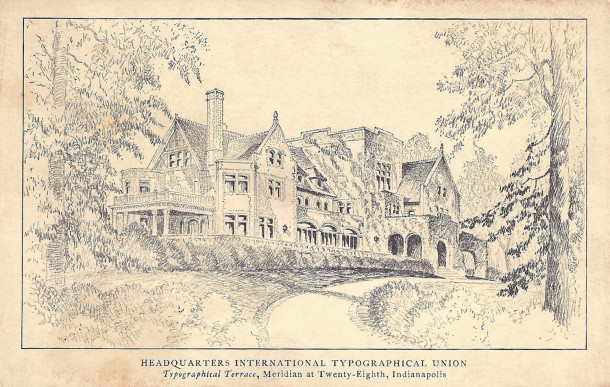 The International Typographical Union was founded on May 5, 1852, in Cincinnati, Ohio.  As a result of a random drawing at a national convention, Indianapolis became ITU Local #1, as well as the union’s national headquarters.

The ITU gained a reputation over the years as being the most democratically governed union in the country.  Throughout its history, the ITU was progressive in its initiatives.  It lobbied for 8-hour work days and making work on Sundays elective, not mandatory.  Although the ITU embraced technological change, the computerization of printing trades reduced the number of typographical jobs.

Late in 1986, the ITU voted to merge with the Communications Workers  of America (CWA).  Prior to the merger, ITU was the oldest continuously operating union in the United States.

In researching the ITU, Historic Indianapolis discovered an area at Crown Hill Cemetery where a number of ITU members are buried together.  The marker was erected in 1911. 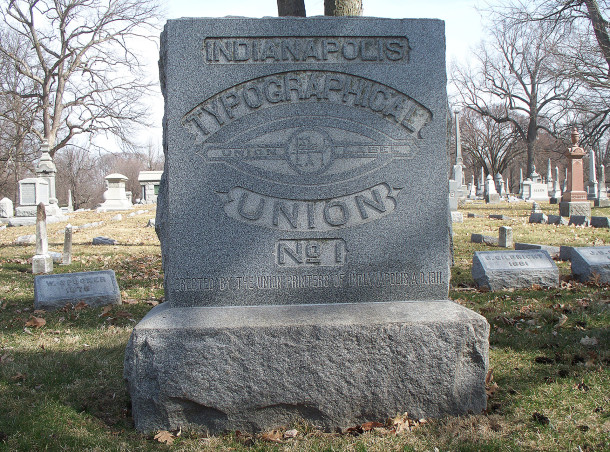 The 13-story commercial building that remains today was built by the Stouffer Company of Medina, Ohio, a suburb of Cleveland.   Construction began in 1966 and was completed in 1967.  Stouffer’s Indianapolis Inn opened in April of 1967.  An early newspaper article that mentioned the hotel appeared on May 30, 1967.  That article referenced the many hotel guests who had to extend their reservations because rain delayed the running of the Indianapolis 500 Mile Race that year. 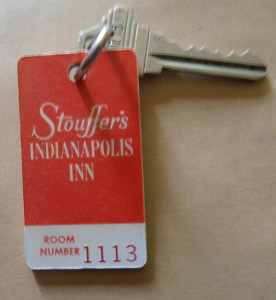 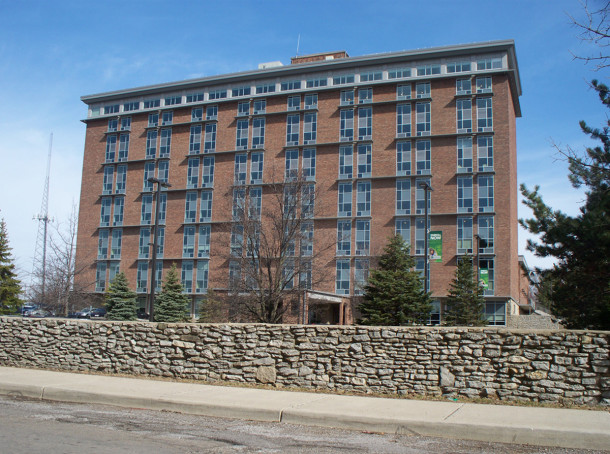 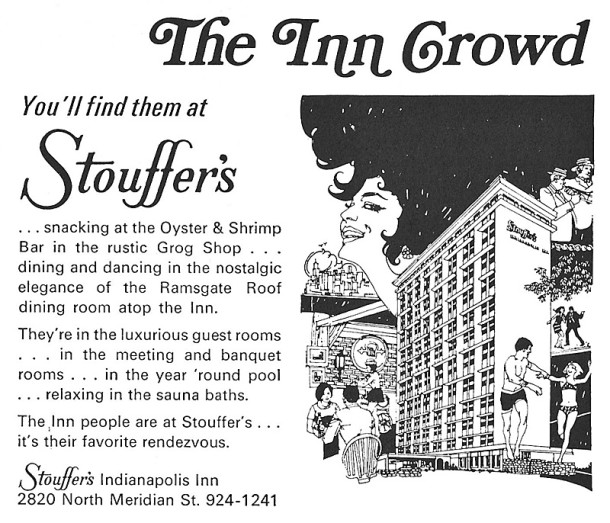 The hotel’s business faltered as Downtown Indianapolis began to experience a rebirth.  Under new management, the name of the hotel was changed to Sheraton-Meridian in 1981.  It closed in 1989, after which time it sat vacant for several years.  Bill Gothard Ministries and his controversial Institute in Basic Life Principles operated in the building in the late 1990s and early 2000s.  The Chicago-based advocate for home schooling and conservative dress recently resigned from his position over allegations of sexual harrassment.

With a grant from Lilly Endowment, Ivy Tech Community College acquired the property in 2010 and renovated the facility for classroom and conference space.  The Corporate College and Culinary Center opened in August of 2012.  It houses the region’s Corporate College and Hospitality Administration Program, as well as a conference center.  With state-of-the art technology, the center provides training and development solutions for Indiana businesses through specialized courses and certifications.  The center also features a student operated fine-dining restaurant called Courses Restaurant and a café called Courses Bakery, as well as a conference center with over 12,000 square feet of meeting space available to the public. 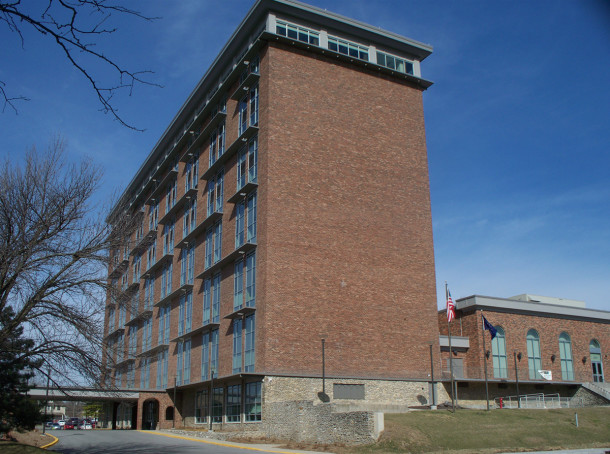 Ivy Tech’s Corporate and Culinary Arts Center, taken from the N. Meridian Street (or east) side of the property     (photo by Sharon Butsch Freeland)

If anyone has a memory of either the former residence or the current building, please share it by posting a comment below.