I have lived on the west side of Indianapolis for all twenty-five years of my life.  As a child, I lived in the Westlake Apartments.  I heard stories of its having been a beach club and a place where kids would go for dances, as well as having been a drive-in movie theatre.  I would love to know everything about it.  Alex W., Speedway

Now called the Westlake Apartments, the complex at 6000 Westlake Drive was named Westlake Arms when it was built in 1973.  Before it became the largest apartment community in Indianapolis, the land north of Rockville Road, south of West 10th Street, and east of I-465 was the site of a popular recreation and entertainment destination. Known at times for its various component activities — Westlake Beach Club, Westlake Fishing Club, Westlake Playland, Westlake Terrace, Westlake Miniature Golf, and Westlake Drive-In Theatre — most people simply referred to the entire compound by a single word, “Westlake.” 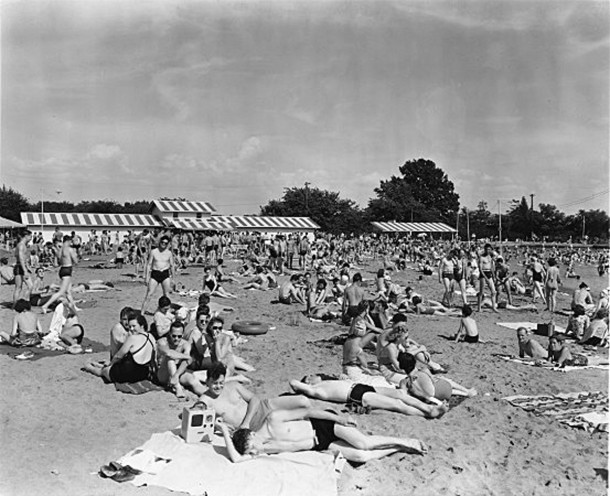 Opened in 1931, the original attraction was a man-made lake on land owned by the Voight family.  Their acreage extended both to the west of and to the east of High School Road. At that time, the interstate system did not yet exist. 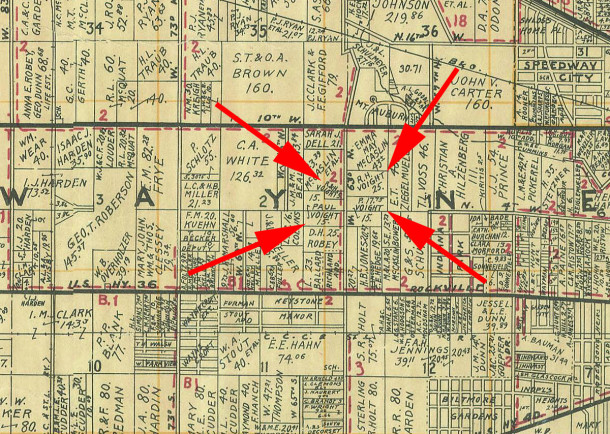 The red arrows on the 1931 map point to the Voight family’s four parcels of land, two on either side of High School Road       (1931 Wagner map courtesy of Indiana State Library)        CLICK TO ENLARGE

The father of the family, Richard Voight, was born in Germany in 1873, and immigrated to the United States in 1891.  He married Ohio-born Hattie Huber in Indianapolis in 1898.  Richard and Hattie’s four children were Paul, Herman, Ernest, and Dorothy.  The family first lived closer-in to town, in the vicinity of W. Michigan Street and N. Tibbs Avenue, where Richard Voight was the proprietor of a grocery store.

By the time of the 1920 Census, the Voights resided outside the city limits in rural Wayne Township.  Their home was listed as being located on Ostermann Road, an early name for what later became West 10th Street.  In 1920, Richard Voight’s occupation was listed as operator of a truck garden.

In 1931, a lake was created on the Voights’ property, after fill dirt was excavated from a field for use on a nearby railroad project.  Ernest, the youngest of Richard and Hattie Voight’s sons, conceived of an opportunity for the hole left in their field and created a swimming club, followed soon thereafter by a fishing club.  Oldest son Paul then joined Ernest in the venture, acting as manager of the facility.  Ernest’s and Paul’s siblings, Herman and Dorothy, were not involved in any of the Westlake attractions. 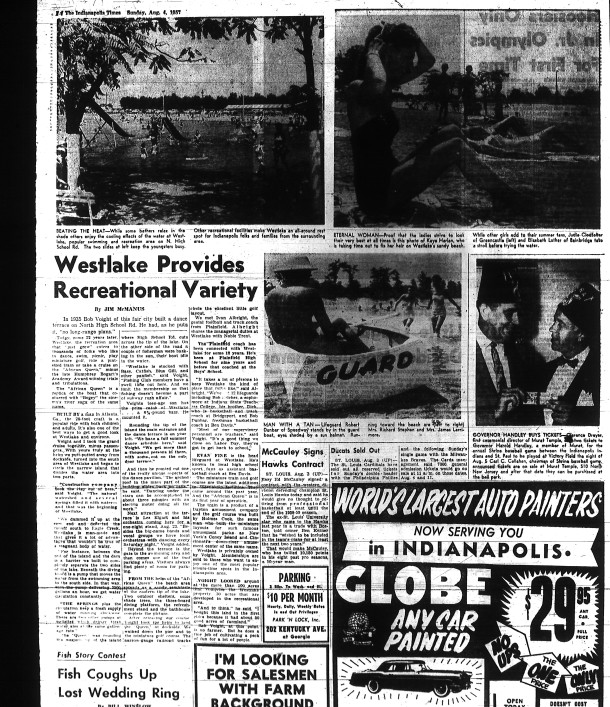 A dance terrace with a retractable roof opened in 1935.  Local bands and national acts alike played at Westlake Terrace.  Because of its location, students from Ben Davis, Speedway, George Washington, Decatur Central, and Pike High Schools frequented it in the greatest numbers, but teenagers from all over the Indianapolis area and beyond enjoyed dancing under the stars at Westlake.  In addition to the ongoing dances put on by the management, Westlake Terrace also became the venue for many high school proms and social club dances. 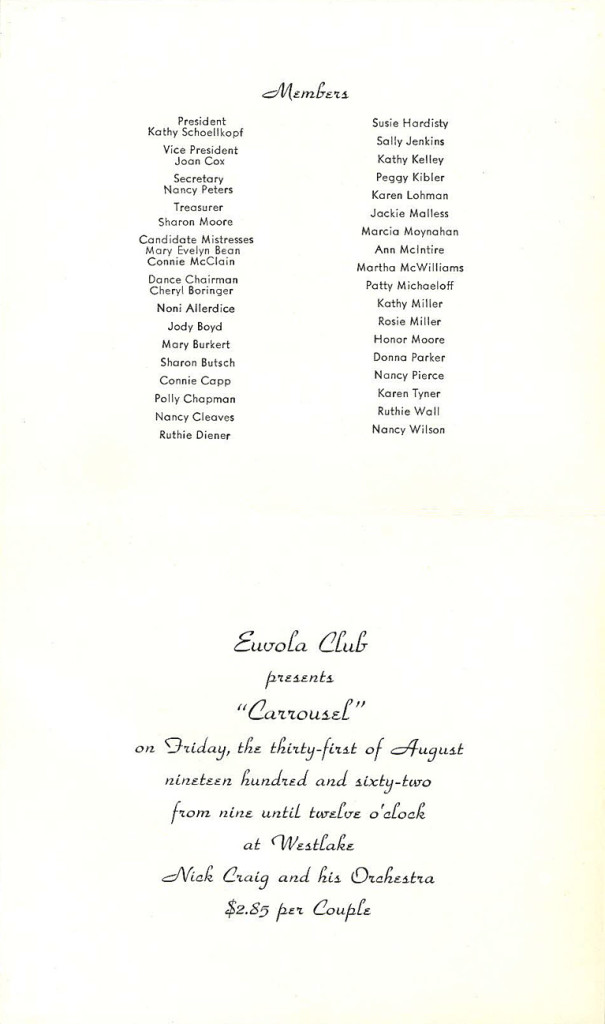 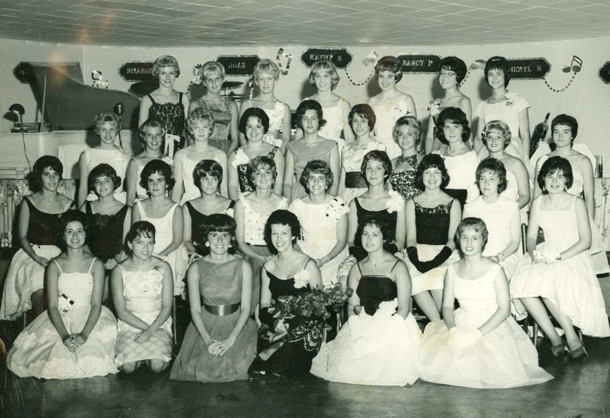 In the 1950s and 1960s, Euvola Club, an organization of high school girls from Shortridge and North Central High Schools   (and later, Tudor Hall School) held its dances at Westlake      (photo from the collection of Sharon Butsch Freeland)

A drive-in theatre was erected at the far north end of the Westlake compound in 1950.  Soon thereafter, the Voight brothers made the decision to split the business into two entities.  Older brother Paul took ownership of the beach club and dance pavilion.  Younger brother Ernest became the owner of the drive-in theatre.  Although Westlake may have appeared to the public as a single operation, from that point on, there were actually two distinct businesses operating adjacent to one another.

Additional features were added to the beach club in the Fifties and Sixties.  A miniature golf course was installed in 1956, with a variety of obstacles on each hole.  A concrete swimming pool was built in 1960, attracting more serious swimmers to Westlake.  A model train provided rides around the property for Westlake patrons.  A Go-Kart track was also added at some point. 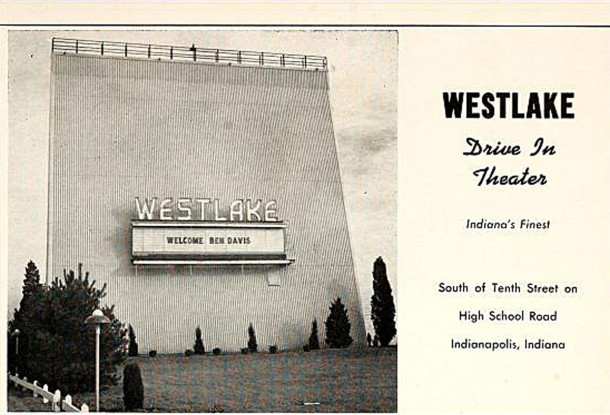 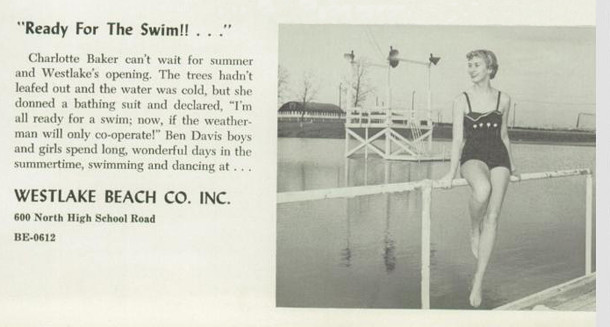 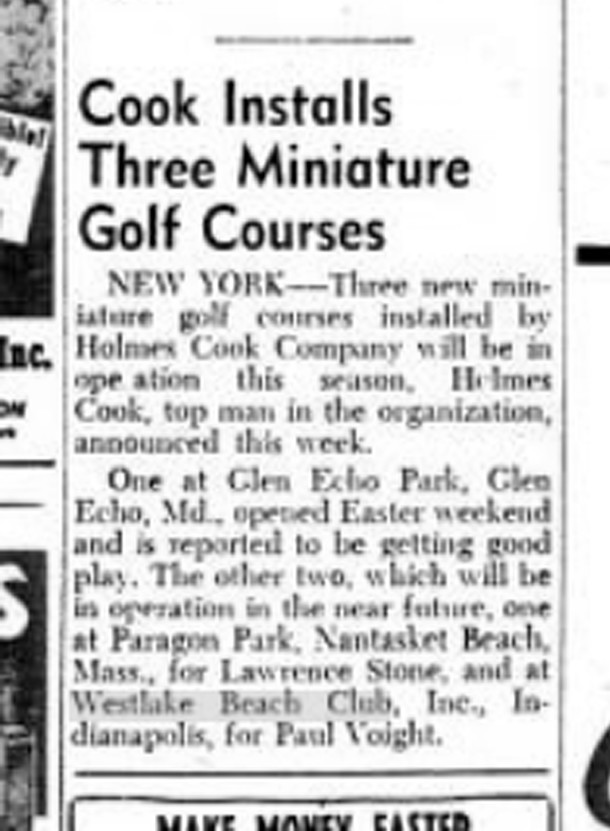 May 12, 1956, blurb in Billboard Magazine announced the installation of the miniature golf course 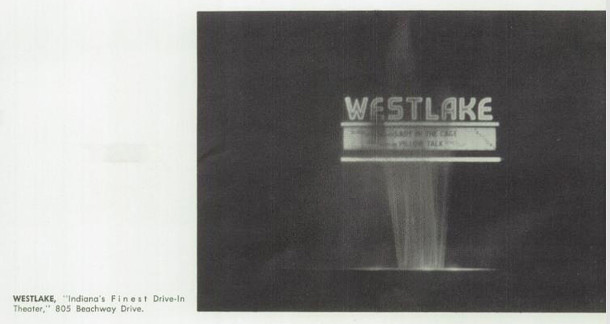 Westlake thrived until the arrival of the interstate system.  In 1962, the western leg of the I-465 belt around Indianapolis was completed.   High School Road was truncated and rerouted when the multi-lane, fast-moving highway was built.   The Westlake attractions had originally fronted on High School Road, a well-traveled but nevertheless local street.  After the interstate went in, access to Westlake was instead on a frontage road alongside the highway, called Beachway Drive.  Westlake was not as visible as it was originally.  The interstate system also led to new housing subdivisions and commercial nodes that became competition for already-existing businesses.  Westlake’s attendance began to decline in the late 1960s and early 1970s. 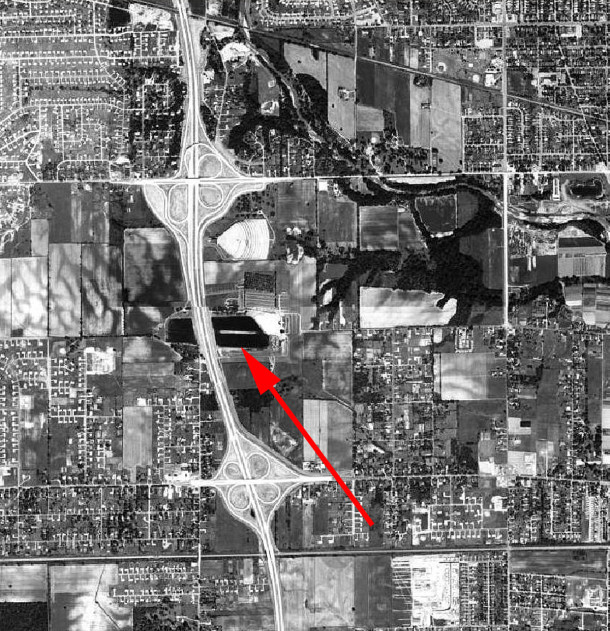 Westlake Drive-In Theatre owner Ernest Voight passed away in 1971.  The theatre, which was located on a separate parcel of land from the property that became the apartments, continued to operate under Ernest’s widow and children until 1981. 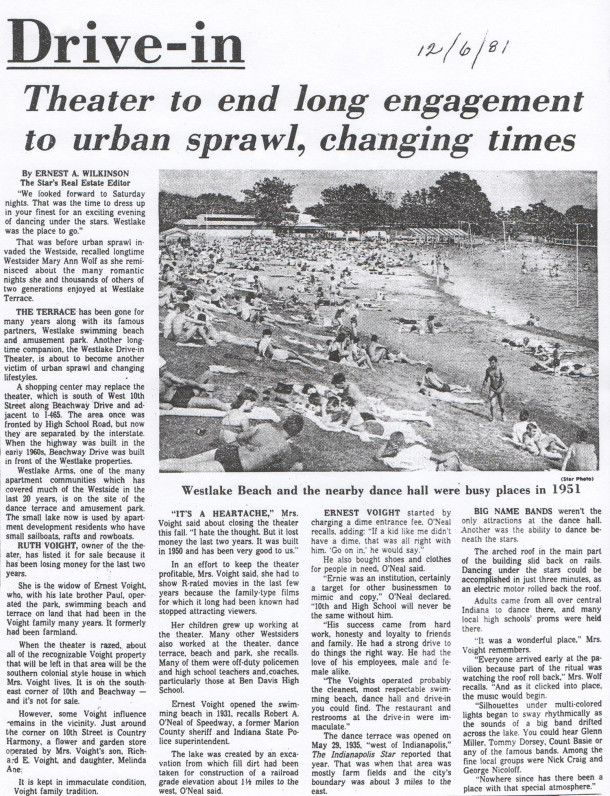 (December 6, 1981, article from The Indianapolis Star)

Although Westlake has been gone for many years, it has not been forgotten.  An event to celebrate the memories made at Westlake was organized by devotees in 2006.  It was such a success, it has become an annual gathering.  The event even has a Facebook page.  Here’s a link to the Westlake Beach Club Reunion Facebook page. 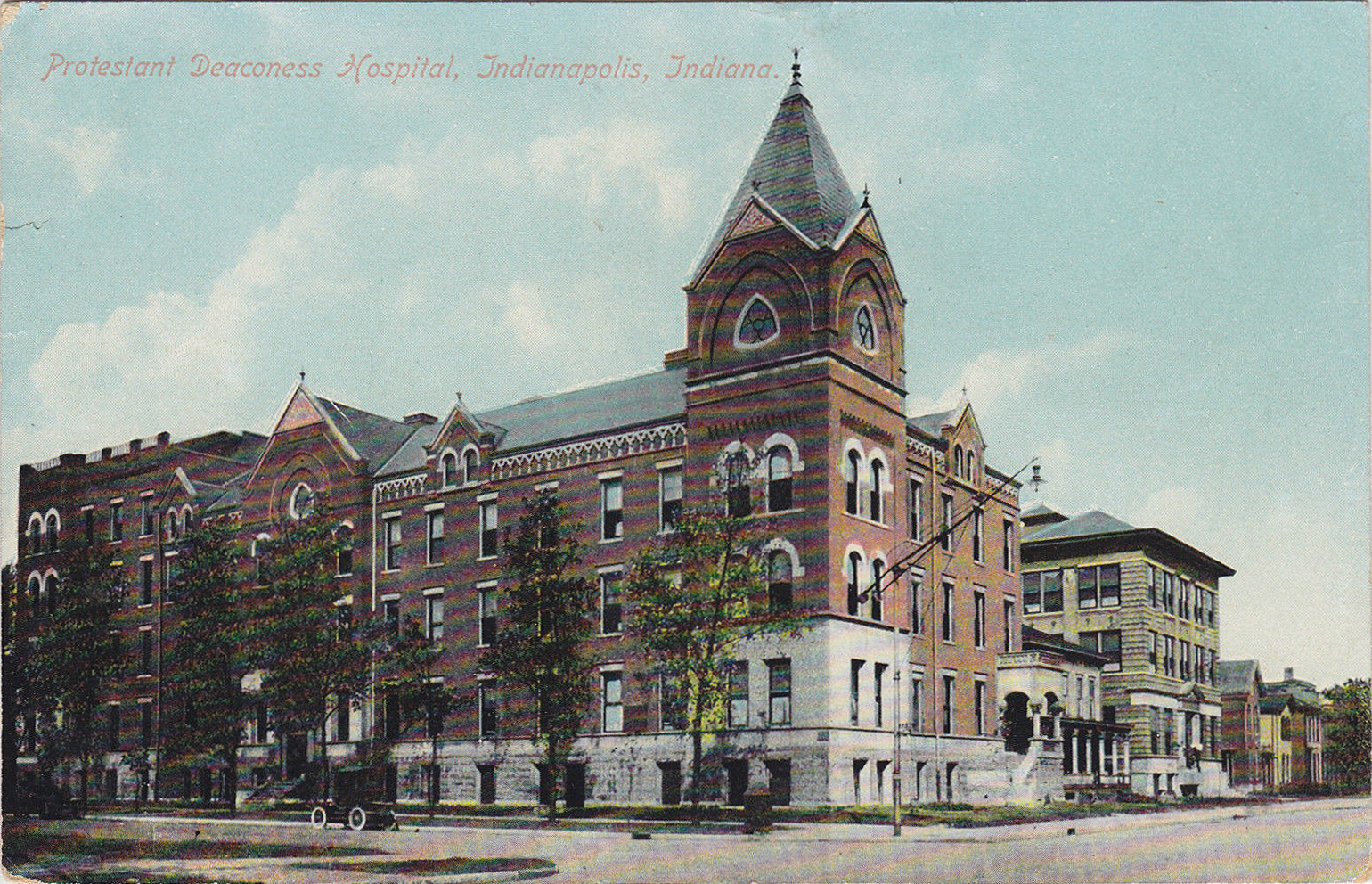