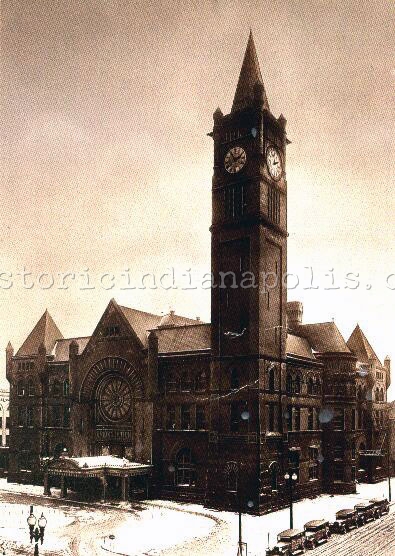 The Indianapolis Union Station is a symbol of progressiveness, despite being built by conservative railroads in a moderate Midwestern city. As the first-ever union station in the world, IUS has the longest history of any, and, unlike many other major train stations throughout the country, is happily still standing proudly over downtown Indianapolis.

What is a union station?

Before giving the history of our own union station, first I will give a definition of a “union station.” Essentially, a union station is a train depot used by all of the railroads entering a city, eliminating the necessity for passengers to leave the station building to change trains between different railroads or routes. While the coordination between railroads was the biggest deterrent to creating a union station, the stations did usually prove to be more efficient for the railroads, as only one station facility had to be maintained, and that cost was usually divided among the tenant companies. While some cities, most notably Chicago and New York, could never consolidate all of their stations, many cities had civic and corporate movements to build union stations. Indianapolis had the distinction of being the first of these.

Before the Union Station

The first railroad in Indiana connected the river port of Madison with Indianapolis, appropriately named the “Madison and Indianapolis”, in 1847, with the first official train arriving on October 1. However, to the disappointment of the city’s citizens, the M&I station was located on South Street, east of Pennsylvania Street, a quarter mile from the edge of town and across Pogue’s Run creek. This site was chosen because the ground was dry, cheap, and convenient. It did not take long, though, for the entrepreneurs of the town to realize an opportunity, and soon a business district appeared around the depot.

By the end of 1848, there were several more railroads under construction or being planned to come to the city, although the M&I was still the only one completed. With exceptional foresight, the Indianapolis city council realized that a common passenger station would benefit the city, and so, on December 20 of that year, they agreed on the formation of the Union Railway Company. The purpose of this company was to build a Union Depot and connecting tracks to the various railroads that would enter the city. 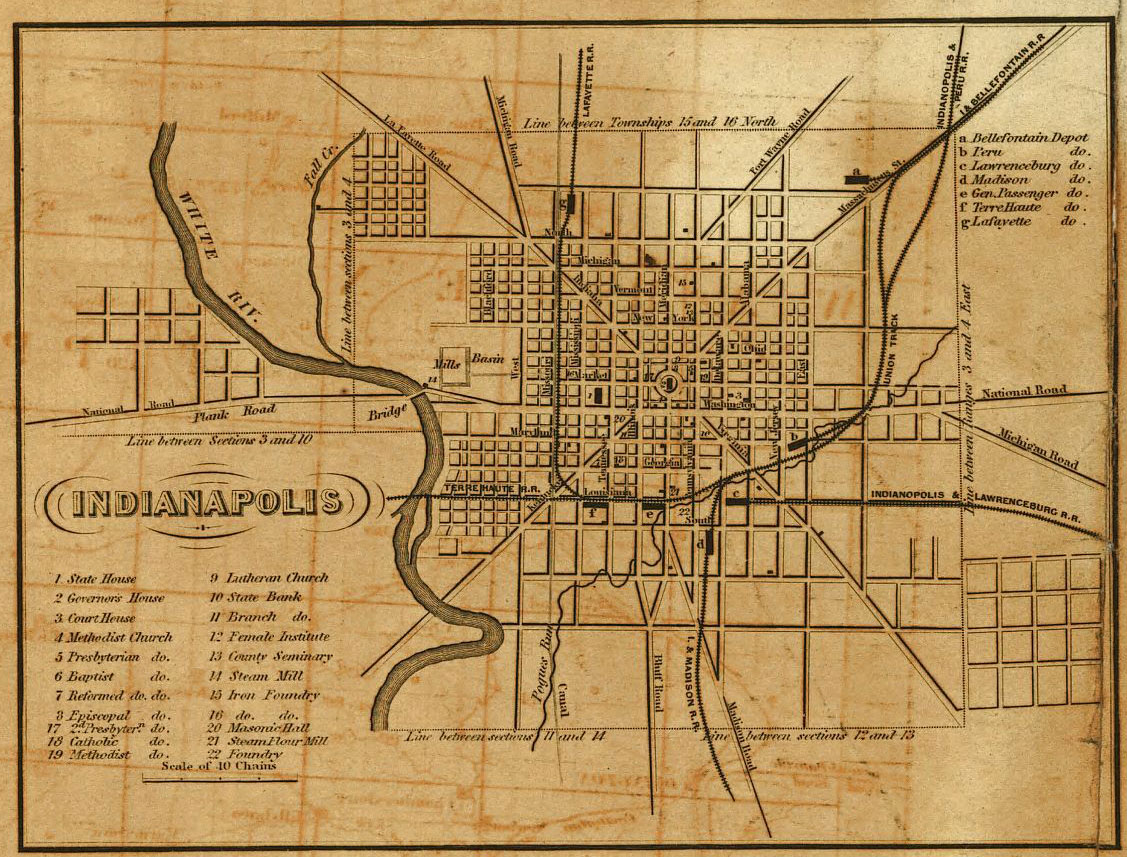 Inset from an 1852 railroad map of Indiana showing Indianapolis and six railroads and their individual depots around the edges of the city. The site of the Union Depot is labeled “e” (Library of Congress map collection)

In 1849, three more railroads were nearing completion in the city, each with its own passenger station located on the fringes of the city (click here for a Bass image of two of these depots). In December, the four railroads agreed to the construction of the union depot and connecting trackage. This resolution put the railroads’ finances and organization in line with the dreams of the city council, and in the summer of 1850, construction of the joint tracks had started. Land for the Union Depot was purchased on Louisiana Street, between Meridian and Illinois, and construction of the building began by 1852. 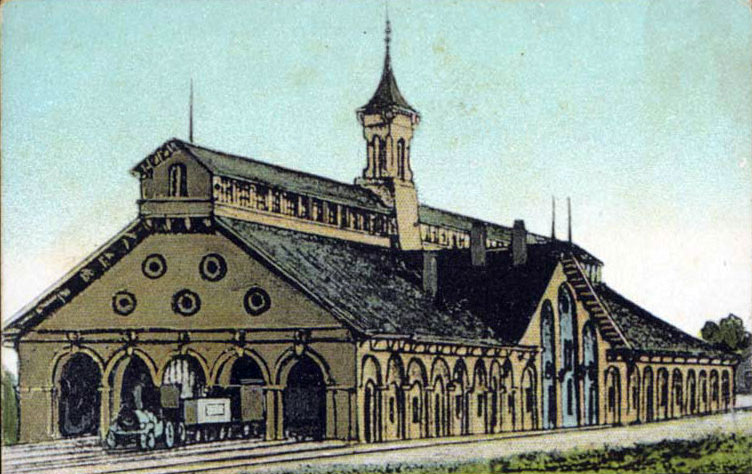 The Indianapolis Union Depot, looking west, from a late 1800s advertising postcard. Additional views are available from the IHS here and here. Note that I know of no photographs of the Depot, despite photography becoming common during its existence.

The Union Depot building was designed by Joseph Curzon, one of six professional architects in Indianapolis at the time. A native Englishman, he would establish a successful practice in the city during the Civil War era, and later work included the Federal-style Second Presbyterian church.

Built for $30,000, the brick depot had five tracks going through it to serve passenger trains, with another two tracks outside south of the building for freight trains. Ticket, baggage, and business offices were in the north side of the building. Overall, the building was 120 feet wide and 420 feet long; it was likely one of the largest buildings in the city for many years. Outside the east end of the depot, the railroads’ tracks crossed over swampy Pogue’s Run on wooden trestle bridges.

The Union Depot officially opened on September 28, 1853, with at least six railroads using the facility. The original M&I depot, the first depot in Indianapolis, was then converted to a freight station. It is not known for certain what happened with the other railroads’ depots.

For a few months in 1864, the Union Depot was the place of employment for young Thomas Edison, telegraph operator. It was here that he developed his first invention, the automatic repeater telegraph, which recorded incoming telegraph signals and replayed them at any desired rate. This allowed him, a slow local message telegraph operator, to transcribe the much faster messages sent over the news wires. This also meant a higher pay grade for him. It is not certain why he left Indianapolis, but, based on his later telegraph jobs, his constant experimenting may have conflicted with his paid duties.

Union Depot as shown on the 1887 Sanborn Fire Insurance Rate Map. The new Union Station was nearing completion at the time the map was drawn (IUPUI Map Collection).

In 1866, the thirteen year-old Union Depot was enlarged to 200 feet wide and reconfigured. An eating house was established, the offices moved to the south side of inside, and the outside freight tracks moved to the north side. With the rapid population growth caused by the coming of the railroads, the growth of rail travel, and the coming of additional rail lines, by 1870, the station was handling 80 trains a day—nearly two million passengers in that year. Talk of a new, larger, depot for the booming city had begun… 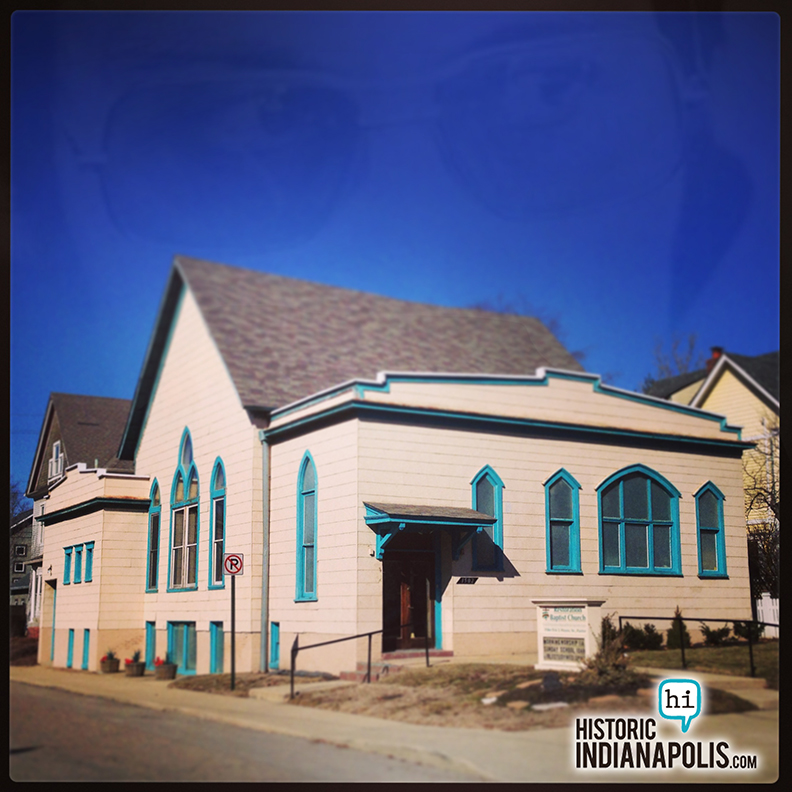