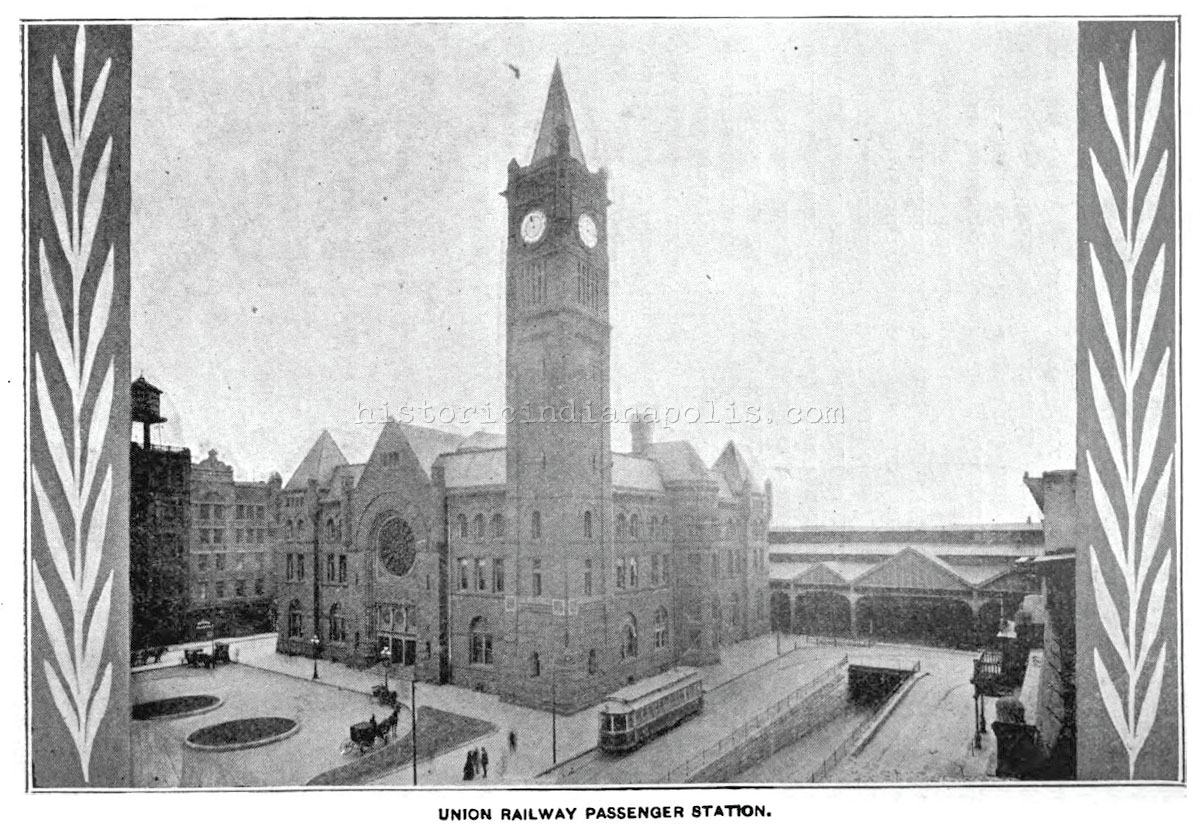 Continuing the story from part one… 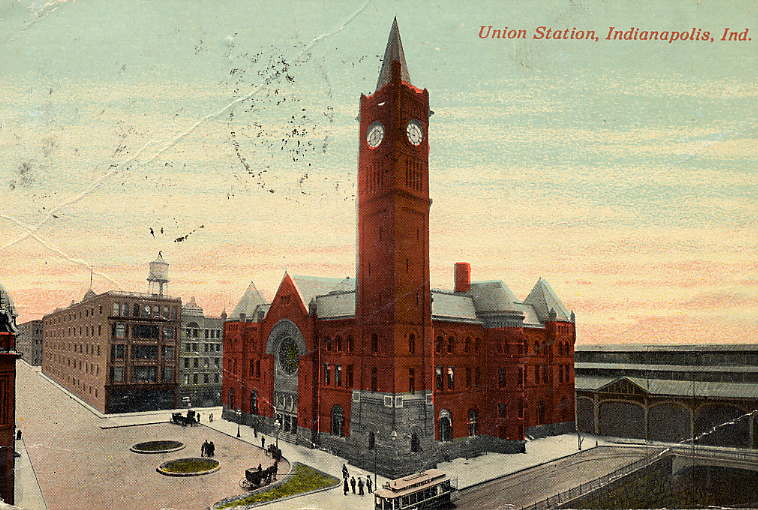 The 1870s were a period of rapid growth for Indianapolis and for the railroads serving the city. As a way to cope with the increasing number of trains blocking downtown streets, a tunnel in the middle of Illinois Street was built in 1872 under the station tracks. While it was designed only big enough for the small mule cars of the time, it became a route for others wanting to avoid delays and daring enough to go into the dank dark underpass.

Another major railroad first also occurred in Indianapolis, as in 1877, the first belt railroad was built in order to serve the Union Stockyards located on Kentucky Ave southwest of downtown. This belt line connected all of the railroads entering the city by a circular track from the northeast to the northwest of downtown. In addition to connecting all the railroads of the city to the Union Stockyards, this allowed freight traffic to bypass the congestion of the Union Depot. Freight trains never left the station area completely, since most railroads had freight stations in downtown, but the belt route did alleviate some of the traffic congestion. 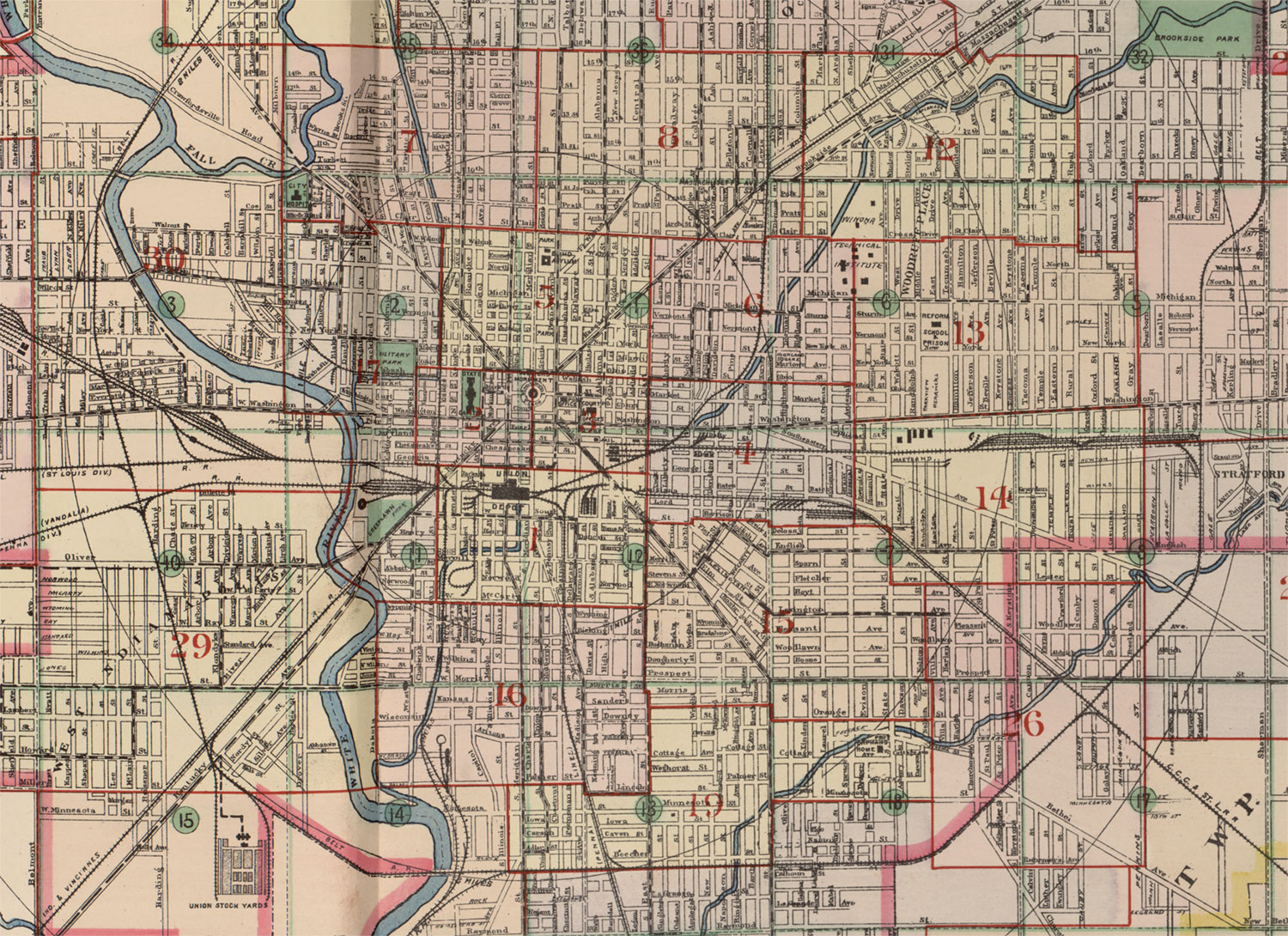 1908 Baist Atlas index map showing the railroads around Indianapolis, including the Belt railroad and the Union Stockyards. The arrangement of railroads in the 1880s was little different than seen here. (Library of Congress)

In 1882, the Indianapolis Union Railway, the successor to the Union Railway Company, leased the Belt railroad for 999 years. This gave the Union Railway a wider and stronger profit base, and in 1883 the company reorganized. One purpose of this reorganization was to accommodate the construction of a new station. By this time, there were fifteen railroads operating to the Union Depot, and enough traffic that passenger trains were often waiting to enter the Union Depot. The passengers probably had the same feeling that modern air travelers have when waiting on the tarmac. In December 1884, the five railroads owning interest in the Union Railway finally passed a formal resolution to construct a new Union Station.

Over 1885 and 1886, the Union Railway worked with the city to obtain the needed land on which to build the new station. For their help in the process, the city required that the Illinois Street tunnel be improved, that Pogue’s Run be covered, and that a viaduct be constructed for Meridian Street. In the end, only the first two projects were accomplished. The Meridian Street viaduct was found to be infeasible due to the lack of cooperation by adjacent businesses and land owners who thought they would lose business if it were constructed.

An indication of the nationalism caused by the growth of railroads, an architect from Pittsburgh, Thomas Rodd, was chosen to design the new station. F.C. Doran of Richmond, Indiana, was his more local assistant. The building they designed is the one familiar to anyone from Indianapolis—a red brick structure on a Missouri granite foundation and Romanesque arches throughout. A 185’ tall clock tower would become one of the tallest points in the city, making it easy for any out-of-town traveler to find his way to the depot. A 741’-long, twelve track wide, open-air iron train shed was to protect the waiting trains and boarding passengers from the elements.

In November 1886, the necessary land between Illinois and Meridian Streets had been acquired and the construction began. Joseph Downey of Chicago and C.J. Shultz of Pittsburgh were awarded the contracts for the station and train shed, respectively. During nearly the entire construction period, the Union Depot remained in use while the Union Station was being built just to the north of it. During the summer of 1888, in the final months of the Station construction, the Union Depot finally came down. The ticket agent and other offices from the Depot were temporarily located in unfinished rooms in the new building and in nearby businesses.

Before the opening of the new Station, it was announced that the operator of the dining rooms would be Thomas Taggart. Taggart had come to Indianapolis in 1877 to work in the Depot’s restaurant, so his performance as a restaurateur was well-known. His restaurant service was second to his political involvement though, and in 1895 he was elected mayor of Indianapolis, and later served as the chairman of the Democratic National Committee. He is honored by a prominent memorial in Riverside Park and is buried in Crown Hill Cemetery.

Tom Taggart, during his time on the Democratic National Committee (wikipedia entry)

Another name of note was William Jackson, who was the namesake of the street in front of Union Station, Jackson Place. Jackson was a ticket agent in the Union Depot and became secretary of the Union Railway Company. It was said that he had convinced investors in Madison to build a railroad to Indianapolis and had part in nearly all of the earliest Indiana railroads. He was a life-long member of the Second Presbyterian Church, gave generously to charity, and was present in his office nearly every day until his death at 91. 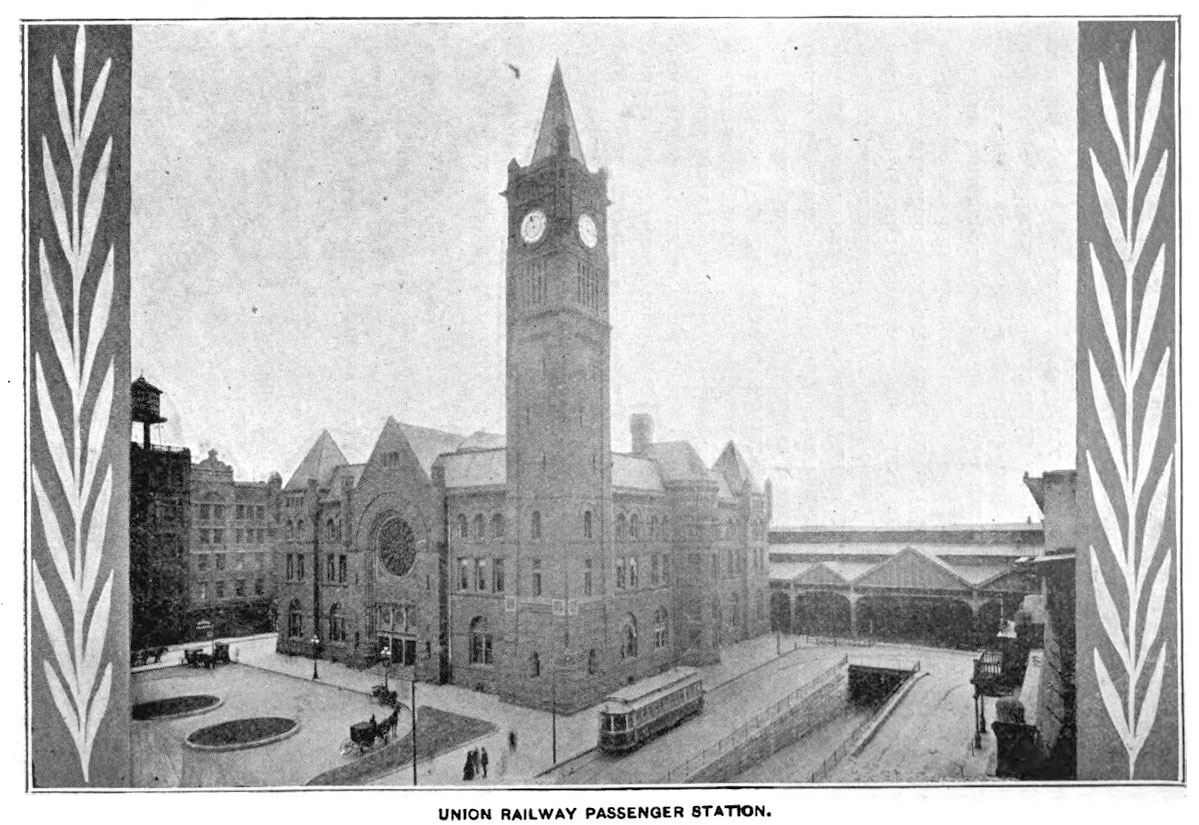 View of the Indianapolis Union Station around 1900. Likely from the same photo as the above postcard, but without the handcoloring and illustrating obscuring the details. Note that the streetcar magically changed length between the two versions. (Hyman’s Journal Handbook of Indianapolis, 1907)

While the newspapers covered the opening of new building in extravagant detail, the Union Station opened to the public without ceremony on September 17, 1888 (just in time to accommodate the rush of passengers going to the State Fair).  The first floor was divided among a gentleman’s waiting room, barber shop, news stand, parcel package room, large ticket office, dining room, lunch counter, and a ladies’ sitting room. The entire station was finely appointed in hardwood and brass fixtures. The ladies’ room was similarly elegantly finished, and notably had a Wisconsin sandstone fireplace. 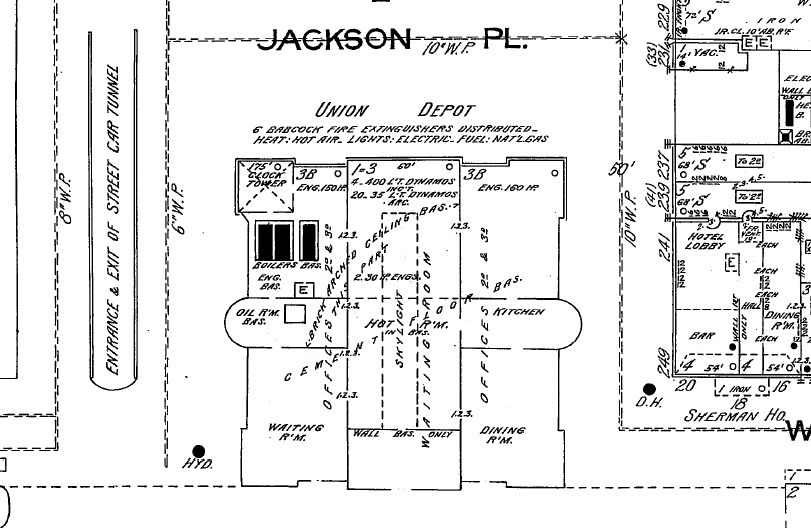 The final price of the new station building, train shed, Pogue’s Run bridges, Illinois Street tunnel improvement, and other costs was estimated to be $1,200,000—nearly $29 million in 2010 dollars. 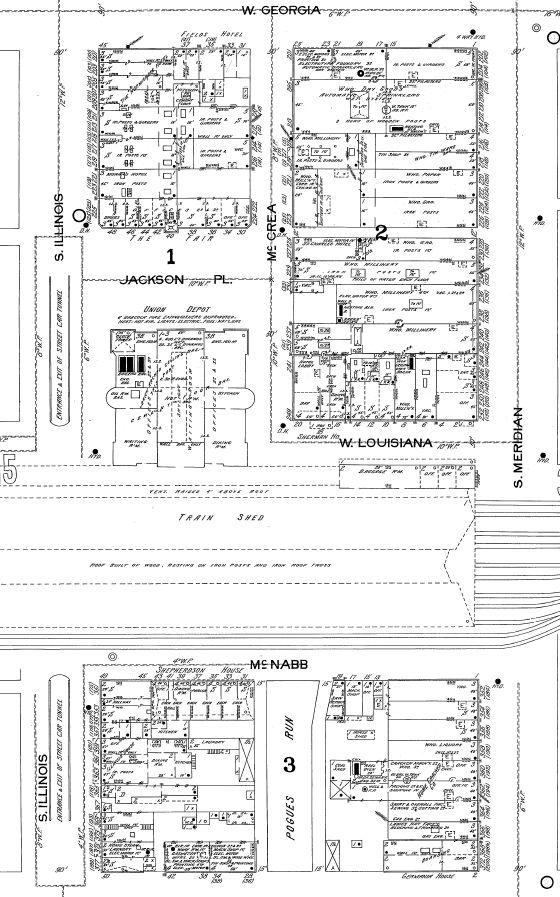 Wider view of the 1898 Sanborn map; there were numerous hotels and rooming houses within the blocks surrounding the depot.

By 1900, the new station was seeing 150 passenger trains per day, and, only twelve years after opening, was already feeling cramped. In addition, the traffic growth meant that the city streets were nearly constantly blocked by waiting trains. Even by 1894, the Commercial Club had begun a group, led by Colonel Eli Lilly, to promote elevating the tracks through downtown. The Union Railway, and its invested railroad owners, balked at the idea of an elevation since the cost was estimated at $9-$19 million (depending on type of construction), several times the cost of constructing the entire new station.

Over the decade of the 1900s, more and more accidents occurred at the grade crossings, and the citizens of Indianapolis’ south side felt more and more disconnected from the rest of the city. Because of the obstacle presented by the railroad tracks through downtown, much of the growth of the city was going north, east, and west, and taking tax dollars with it.

While unable, or unwilling, to front the cost of elevating the tracks, the Union Railway coped with the traffic growth by remodeling the station in 1913, increasing the capacity an estimated 50 percent. Gone were the separated waiting rooms and the lunchroom, replaced by a large T-shaped general waiting room. The barbershop was moved to the basement, along with the restrooms and smoking rooms. A separate “immigrant’s waiting room” was also placed in the basement, accessed by an outside stairway. Lighting throughout the station was improved to overcome the dark and shadows within the Victorian building. The most prominent exterior feature of this remodeling was the addition of a marquise over the main doors on the north side, allowing passengers to arrive or depart by taxi in shelter (Bass Photo). It should be noted that this marquise was not the same one as seen today (which is a product of a later remodel). 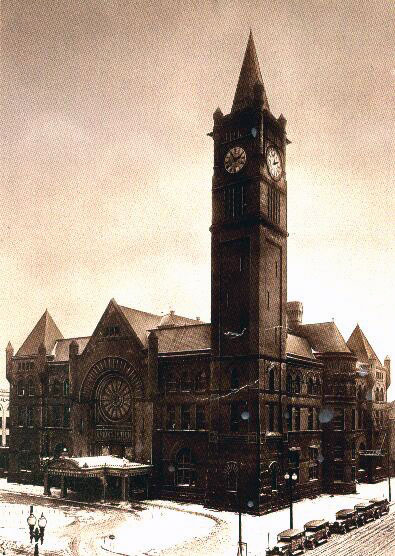 Union Station in 1922, the new platforms of the track elevation are barely not visible here.

In 1915, the issues of track elevation and the ever-flooding and increasingly rank Pogue’s Run were finally resolved, with the railroads and city agreeing to split the cost of the projects 75/25. The city’s 25% was further split among Indianapolis, Woodruff Place, Marion County, and the Indianapolis Traction and Terminal Company (operators of the Indianapolis Traction Terminal). Pogue’s Run was to be routed through a 2-mile long, nineteen feet wide by eight feet high tunnel from the White River to New York Street. The twelve station tracks and two freight tracks would be elevated on a combination of concrete overpasses and earthen embankments. 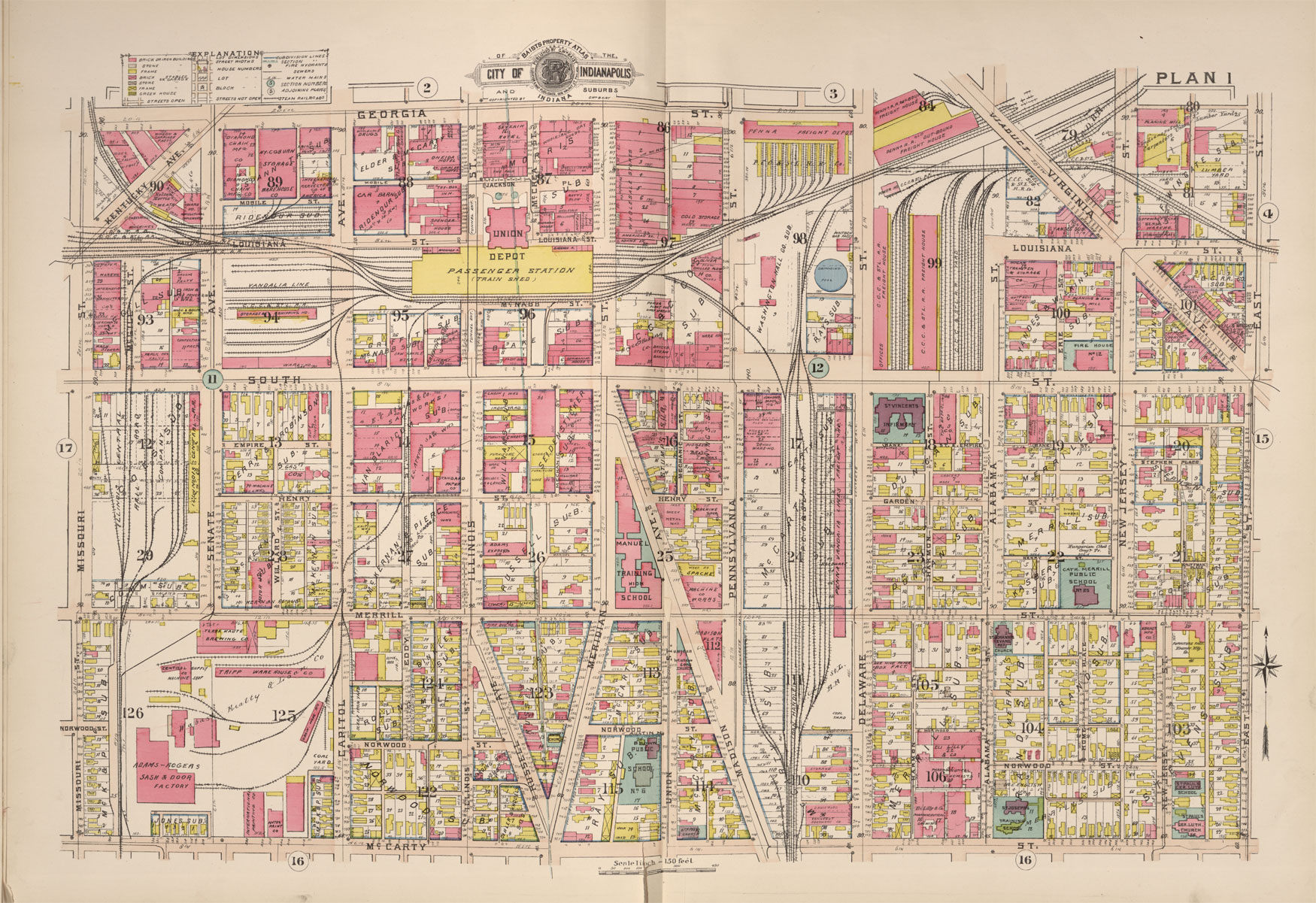 1916 Baist Atlas map, after the tunneling of Pogue’s Run, but before major work had been down on the track elevations. (Library of Congress)

With the work on Pogue’s Run ongoing, and despite various setbacks (including the Great War and associated material shortages), the track elevation progressed in stages from 1915 to 1924. It was in 1919 that the old train shed was demolished, with half of the tracks in the station already elevated. In 1922, the Station’s new elevated platforms and associated concourse underneath were nearly complete. Also located under the elevated tracks were baggage and mailrooms, allowing these facilities larger spaces than in the old train shed.

The Bass Photo Collection on the Indiana Historical Society has numerous photos of the station throughout this period, including the track elevation construction. You can browse through them here.

With the completion of the track elevation and other improvements, the Station was ready to handle ever more trains. Unfortunately, by 1925, the automobile had already started to cause the long slow decline of passenger rail travel… 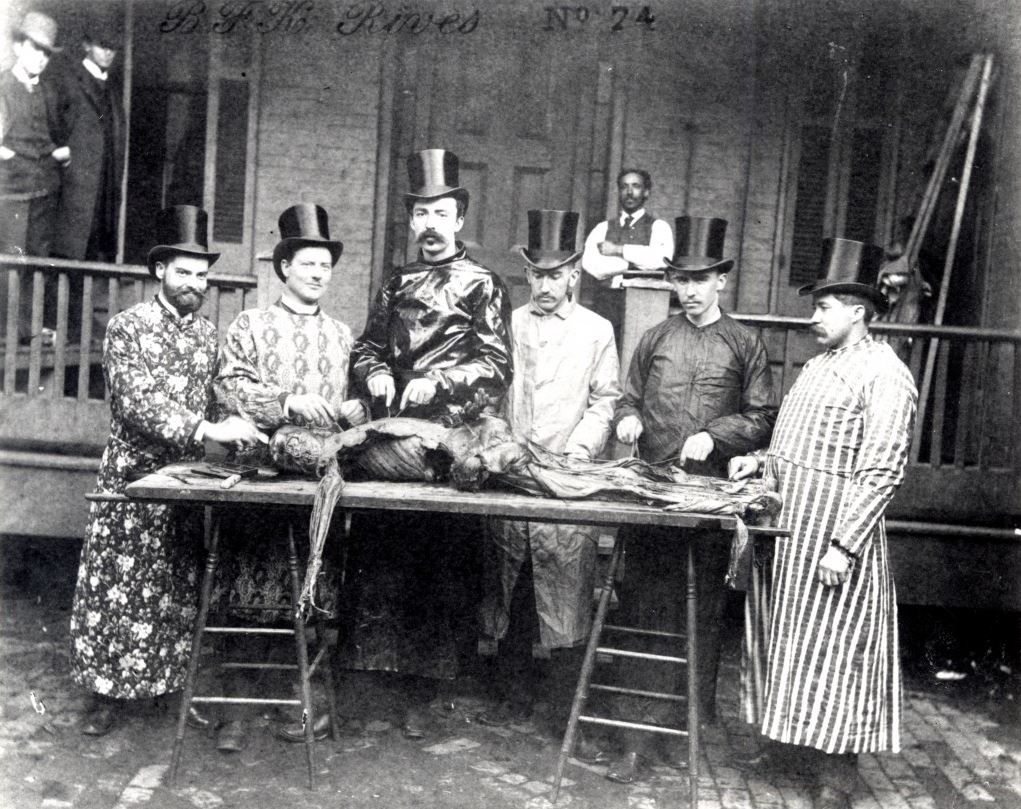 Rufus Cantrell, Intruder in the Dust