Welcome to Highland Park in the Holy Cross neighborhood

Indianapolis’s second highest elevation is found in a park in the Holy Cross Neighborhood, near 1100 East New York Street.  The park’s unimaginative name?  Highland Park.  But what this green space lacks in clever naming, it makes up for in beauty, history, and community involvement.

The 4.09 acre neighborhood park is one of Indianapolis’s oldest and is set in one of its most venerable communities.  The area we now know as Marion County was originally inhabited by the Delaware tribe of the Miami Nation.  The United States government entered into a land treaty with the Miami Nation in 1819.  Three years later, a tract of land spanning from today’s New York Street at Oriental to Highland Street was deeded to Casey Ann Pogue.  Casey, a relative of George Pogue, who is regarded as one of Indiana’s earliest white settlers, and the man for whom Pogue’s Run is named, sold the land to the state’s fifth governor, Noah Noble, in 1832. 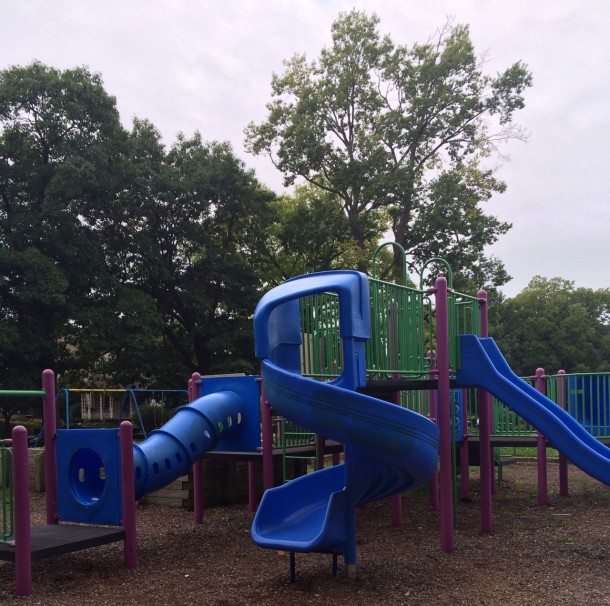 Highland Park is a great place to play

Governor Noble built a large mansion called Liberty Hall near the intersection of E. Market and N. Pine Streets.  He lived there with his wife and children until his death in 1844.  Governor Noble left 80 acres of land to his eldest daughter Catherine.  Catherine’s daughter, also named Catherine, and her husband George F. Miller built their residence, Highland Home, on the land.  The Governor’s widow lived with her daughter’s family until her death in 1874.  Daughter Catherine sold Highland Home to the city of Indianapolis in 1898 on two conditions: the house must be demolished, and the land where it stood would become a park.

Coincidentally, the Millers are also the ones who gave their long-time slave and servant Louisa Magruder her home on Highland Avenue. 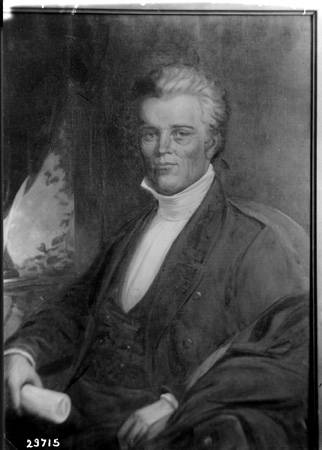 The bricks from Highland Home were repurposed to build attractions in Garfield, Brookside, and Riverside Parks.  A forty-nine foot fountain was erected where Highland Home was located.  One of the park’s stately oak trees is said to have been planted by the Governor’s wife in his memory.  Today, its trunk is nearly thirty six inches in diameter. 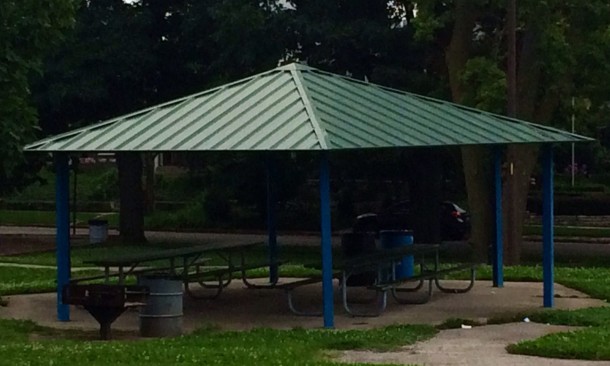 The picnic shelter at Highland Park

In 1955 the city made plans to sell Highland Park.  Noah Noble’s great granddaughter, Valette Miller White, launched a campaign to save the park.  She wrote a newspaper article , decrying the loss of “a piece of dedicated land, nearly as old as the city itself.”  Thanks to the efforts of White and the residents of the Holy Cross Neighborhood, the city voted to retain Highland Park.

Though the Highland Park fountain no longer stands, visitors can enjoy other amenities, such as a playground, paved walking trails, and a picnic shelter.  But the park’s most spectacular feature is the view of downtown it provides.  There is scarcely a better place to take in the Indy skyline or holiday fireworks. 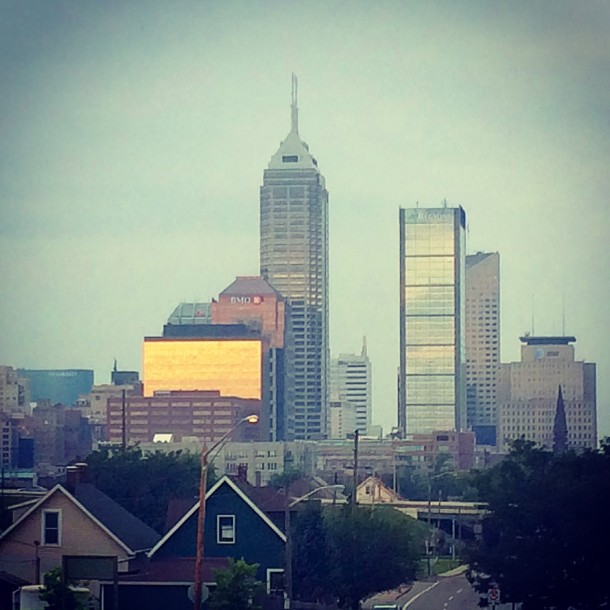 There views of Indianapolis from Highland Park are breathtaking!

The quaint Holy Cross Neighborhood is experiencing a rebirth, as a group of developers seek to build sustainable housing around the park.  As this community’s next chapter begins, its rich history is maintained in Highland Park.