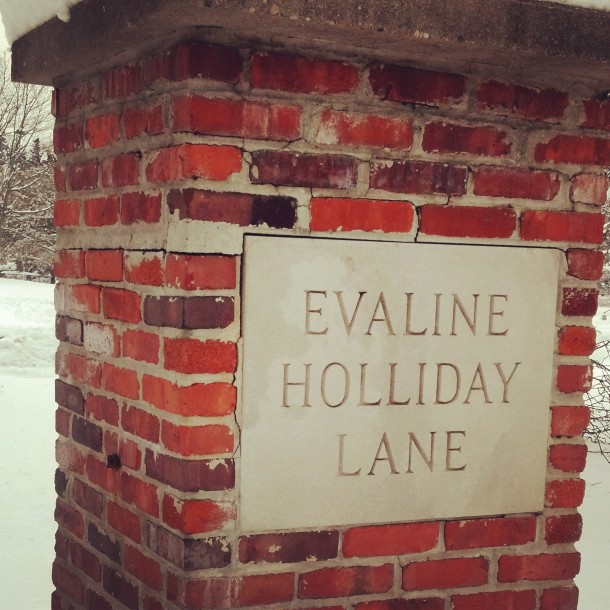 “I went to the woods because I wished to live deliberately, to front only the essential facts of life, and see if I could not learn what it had to teach, and not, when I came to die, discover that I had not lived.”  -Henry David Thoreau 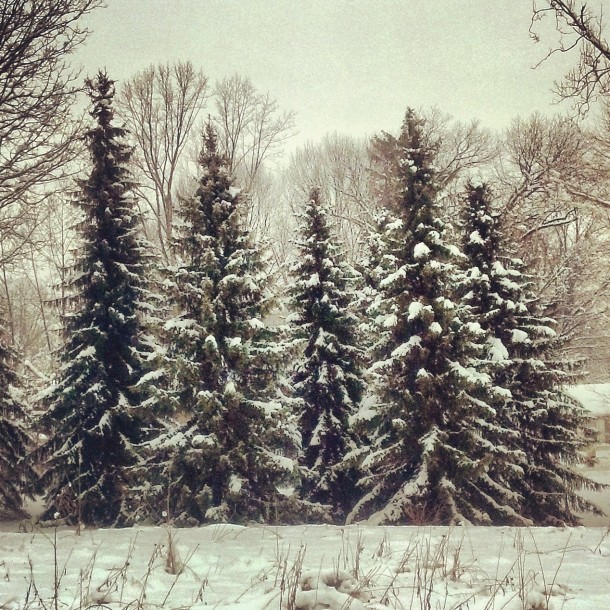 The woods are lovely, dark, and deep.

Heading out into the woods during a record cold snap is no accident. For me and other visitors to Holliday Park this week, we deliberately bundled up in our warmest layers. Some brought sleds, cross-country skis, or snowshoes to make passage through the knee-deep snow manageable. Others had their binoculars for bird watching. We all remembered our mittens and hats. Perhaps we were channeling our inner Thoreau in hopes of learning what life has to teach us. Okay, let’s be honest—we were just trying to stave off cabin fever. 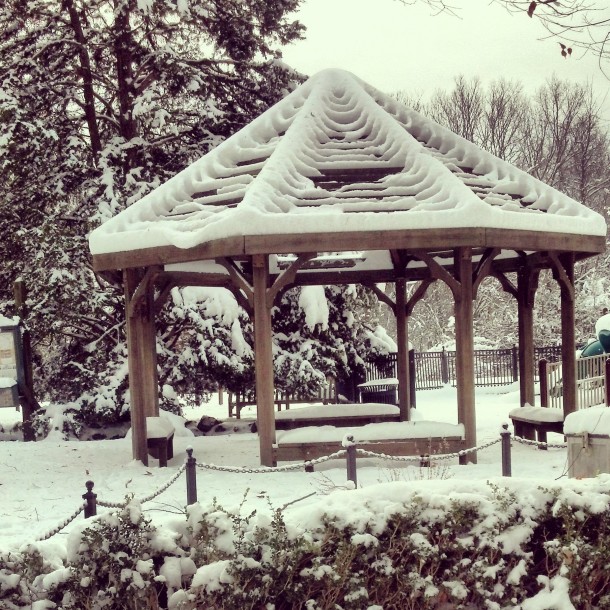 A gazebo at Holliday Park–the perfect spot for a summer picnic.

Holliday Park has long been a respite for those in Indianapolis seeking a change of scenery. Located at 6363 Spring Mill Road, this 94-acre area was deeded to Jeremiah Jr. and Samuel Johnson by the United States government in 1823. The land served as a farm, changing hands several times, until it was sold to John Holliday in 1892. 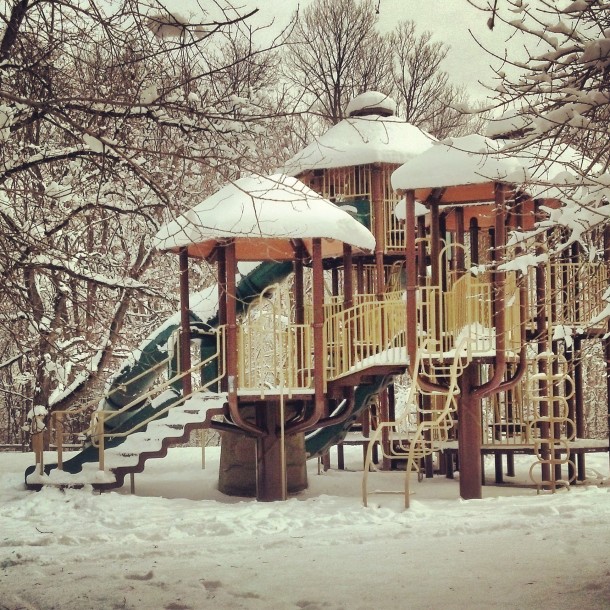 The playground at Holliday Park.

The Holliday family’s influence on Indianapolis extends past the namesake park.  John Holliday founded The Indianapolis News in 1869 at the age of 23. Outside of the newsroom, he is remembered as a philanthropist with a heart for the city’s poor and underserved. He served as president of the Indianapolis Charity Organizations Society, was a member of the State Board of Charities and the Commercial Club, and acted as the treasurer of the state’s Red Cross chapter during World War I. Holliday founded the Immigrant Aid Association and the Foreign House, a place where families immigrating to the United States could find temporary housing and attend English language classes. 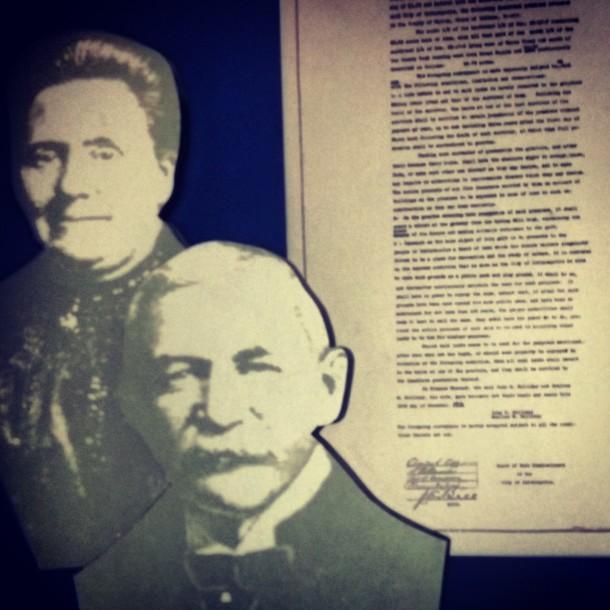 His wife Evaline was also a community activist, passionate about preserving and promoting Indiana history. She was the founder of the Society of Indiana Pioneers and involved in the D.A.R. and the Indianapolis Woman’s Club. 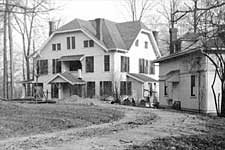 The Hollidays built a 23-room farmhouse on the land just north of what is now Spring Mill Road and their children spent the summers bounding through the woods and wading on the sandy shores of the White River. They often entertained guests and hosted a spectacular fireworks display on the 4th of July. In 1916 at the centennial celebration of Indiana’s statehood, the Hollidays gifted the city of Indianapolis with their lush estate. 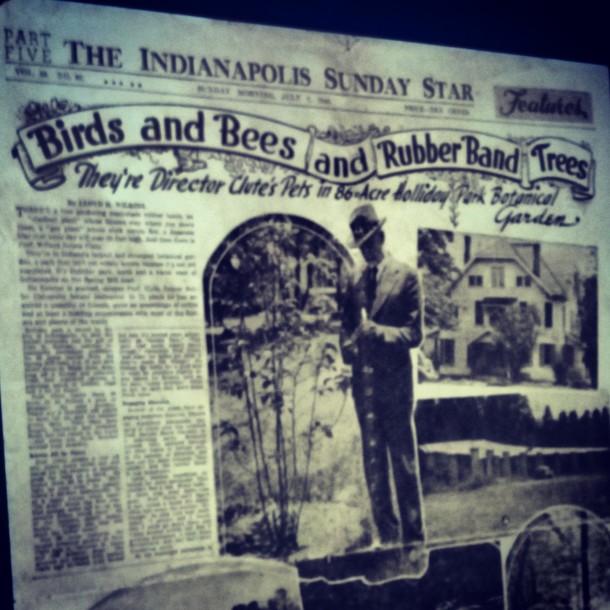 The family asked that the land be preserved as a space for public recreation and appreciation of nature. Following Evaline Holliday’s death in 1929, the area was turned over to the city. 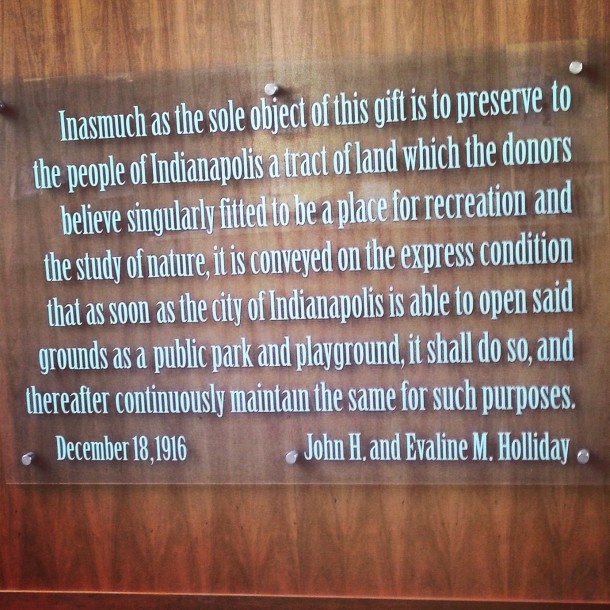 The Hollidays asked that the park remain a place dedicated to recreation and the study of nature. This plaque hangs in the Nature Center.

The landscape of Holliday Park changed rapidly once becoming property of the City of Indianapolis. In 1932 WPA workers began building trails and damming creeks to create fishing ponds. Botanist Willard Nelson Clute was hired to design and landscape the gardens at Holliday Park. He envisioned these grounds being curated into one of the world’s finest botanical gardens featuring only the rarest and most exotic plants, a point of contention between Clute and the Parks Department. After spending nine years creating his masterpiece, he walked away from his position as curator when the Department asked him to plant a bed of zinnias at the entrance to the park. Most of his work, as well as many of the trees planted by the Holliday family, were destroyed in a 1947 tornado. The wooded walking trails remain, leading park visitors to the playground, a rock garden, and a watershed area popular among paddlers and fishers. 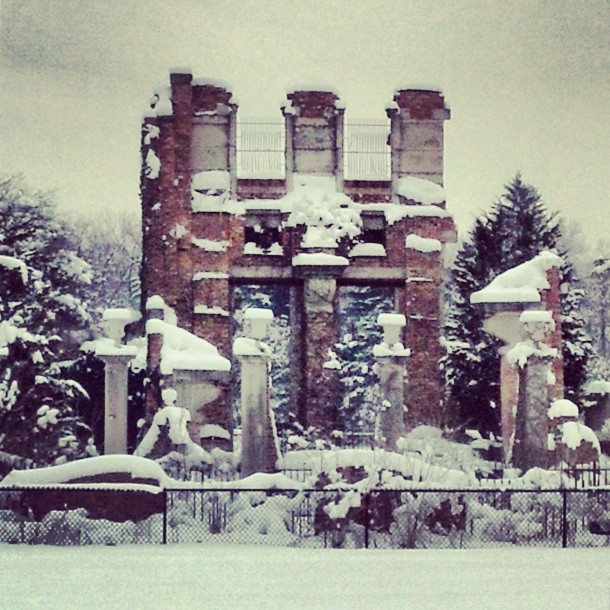 The Ruins at Holliday Park

While the natural beauty of Holliday Park cannot be overstated, one if its most prominent features is The Ruins. The sculpture known as The Races of Man, crafted by artist Karl Bitter from Indiana limestone, once graced the façade of the Western Electric Company in New York City. In the late 60’s the company developed plans to build a new skyscraper on the site. Indianapolis artist Elmer Taflinger proposed moving the statues to Holliday Park to be displayed with other salvageable sculptures that were being torn down around Indianapolis at the time. The Ruins were dedicated in 1973 and became one of Holliday Park’s  unique assets.  Taflinger imagined further expansion of The Ruins to include an amphitheater for arts performances and courtyards with reflecting pools and fountains that would mirror the design of the National Mall in Washington D.C.  The surviving members of the Holliday family objected, voicing that these plans were not in keeping with John and Evaline’s condition that the natural state of the park be maintained for the citizens of Indianapolis.  The City concurred with the Hollidays and Taflinger’s vision of The Ruins was never realized. 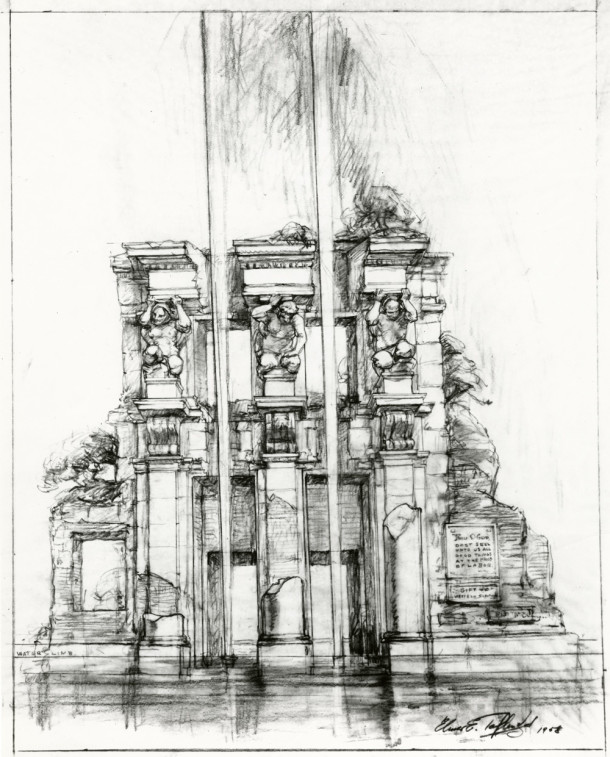 Taflinger’s plans for The Ruins 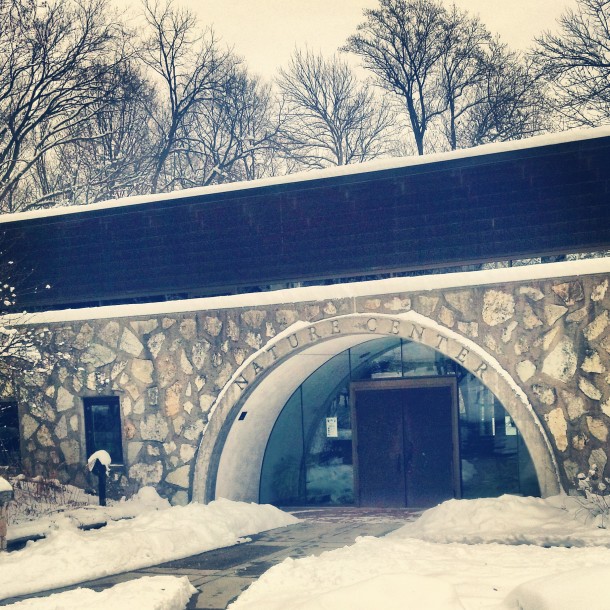 The Center opened its doors in 2000 as a place where visitors can learn about the area’s history, geography, and wildlife as well as ongoing conservation efforts. A bird watching area allows patrons to get up close and personal with feathered friends as the munch on seed and suet.  The pergola and arborvitae hedge at its entrance harken back to the estate’s heyday—they were designed and installed by Alexander Holliday, one of John and Evaline’s sons. The Nature Center holds programming for Boy and Girl Scout troops, school field trips, and local naturalist groups such as the Audubon Society. 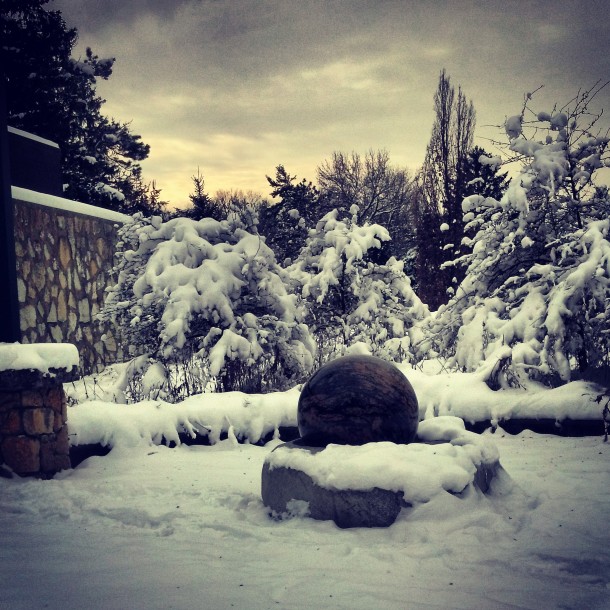 A winter sunset, as seen from the courtyard of the Holliday Park Nature Center. The spinning orb fountain is a modern addition.

What life lessons did I glean as I traipsed through Holliday Park, living deliberately and with intention? I learned that nature has a way of slowing down the hurried mind and why spending time among the trees was important to the Holliday family.  I realized how investing in a community can have far-reaching impacts, just as John and Evaline hoped when they donated their beloved home to the city. I discovered that one park can celebrate both the beauty of a pristine natural environment and the manmade triumphs of sculpture and architecture.  Above all, I learned how long it takes to regain feeling in my toes after a walk in the snowy woods.