In honor of the birthday of architect Mies van der Rohe (March 27, 1886 – August 17, 1969), I have digressed from the usual “then and now” theme and mourn the loss of a Mies van de Rohe-designed drive-in that never came to be.
During the late 1940s Joseph Cantor, whose family owned a string of theaters, drive-ins, and roller skating rinks in Indianapolis, wanted to build a drive-in restaurant on West 38th Street near Speedway. According to a+u Art & Urbanism magazine, Cantor stated that “the best architect in the world doesn’t charge me any more in fees than any other architect,” so he hired the famous architect then working in Chicago.

Ludwig Mies van der Rohe was one of the leading architects of the International Style, a 20th-century modernist style identified by open interior spaces, unadorned geometric forms, and the use of glass and steel building materials. After working in his native Germany and directing the Bauhaus design school in the early 1930s, he moved to the United States in 1937. From 1938-58 he was head of the architecture department at the Armour Institute of Technology (now named the Illinois Institute of Technology or “IIT” ). 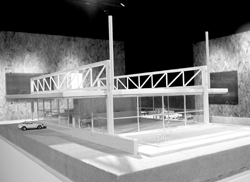 (Photo of the Cantor Drive-In model by Sandy Ackerman, University of Michigan Library)

For reasons that I have not yet learned, Cantor never built the drive-in or his Mies van der Rohe-designed house. But fortunately, 229 pages of plans and drawings are archived at the Museum of Modern Art. 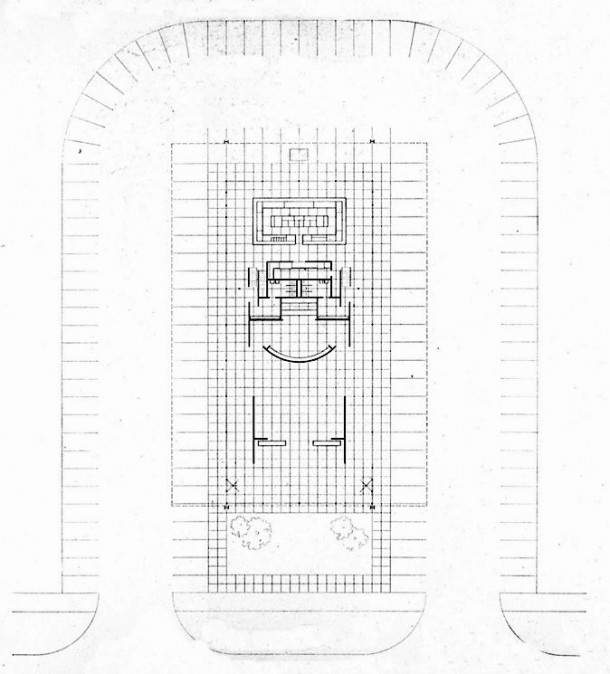 (Elevation drawing for the Cantor Drive-In in Indianapolis, Museum of Modern Art)

Lynn Becker described the drive-in in her article “Mies van der Rohe and the Creation of a New Architecture on the IIT Campus” (Chicago Reader, September 26, 2003):

An unlikely client had provided the precedent for the radical design. Lambert [a friend of the architect] describes how Mies was enlisted in 1945 by Indiana movie-house mogul Joseph Cantor to design a fast-food drive-in restaurant that would stand out from the banal clutter along the highway. Mies came up with a dramatically long, lanky building whose interior space was free of columns. Its all-glass walls let the interior glow, drawing diners in from the darkness like bugs to a zapper. The most stunning element was the ingenious structure: a pair of huge open trusses mounted on four thin end columns that spanned the entire length of the building and carried below them a flat slab roof that cantilevered out over the driveway.

The drive-in was never built, but its trusses became the exposed exoskeleton of Crown Hall -four 120-foot box girders, from which the roof of the 120-by-220-foot structure was hung. Mies had simplified his basic design yet again. Crown Hall consists of a single room of 56,000 square feet, entirely enclosed in glass and completely free of interior columns.

Front elevation drawing for the Cantor Drive-In in Indianapolis, Museum of Modern Art

In a toast  to Mies van der Rohe’s 125th birthday in 2011, Phyllis Lambert, his former client, student, and friend, mentions the Indianapolis drive-in. She recalls that “He had designed Cantor Drive-In in Indianapolis, its roof over the clear-span space supported by two huge exoskeletal trusses in the longitudinal direction. But in 1948 it was not yet built and it never was.” She goes on to explain that he just had to build his clear-span building and eventually did so with Crown Hall at the Illinois Institute of Technology. Crown Hall is considered one of his masterpieces.

Since Cantor Drive-In was never constructed in Indianapolis, and the intended location of it is unknown, here are two non-traditional “now” images influenced by the drive-in’s design.

Oddly, a redesign of the Cantor Drive-In was built in 1964 as the Villa Park Bank in Illinois. In 1956 Mies granted permission to Peter Roesch (one of his graduate IIT architecture students) to rework the drive-in concept for his master’s thesis for a church. Nearly a decade later, Roesch’s architectural firm used the church design for the Villa Park Bank, which still stands. (Village of Villa Park Historical Preservation Commission, photograph by Carol Marcus) 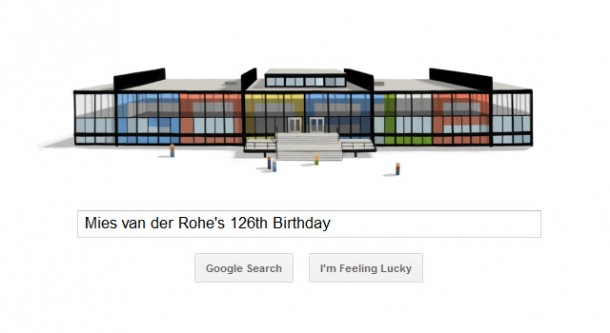 On March 27 Google honored Mies van der Rohe’s 126th birthday by featuring a stylized image of S. R. Crown Hall, derived from the Cantor Drive-In concept, as their daily doodle. Happy Birthday, Mies! I wish we could have celebrated this week by eating at the Cantor Drive-In, but even if it had been built and survived, it likely would be on the city’s demolition list.