In honor of the Indiana State Fair, today’s post is a revised and expanded version of a 2011 article I wrote featuring some of the prizes, trinkets and advertising that represent the State Fair’s 162-year-history.

Nathaniel Kemp was a prominent farmer and county commissioner when he traveled to Indianapolis in 1856 and took First Prize for the Best Bushel of Wheat at the Indiana State Fair. The premium was a silver loving cup, which Kemp had proudly engraved with his name when he returned home to Winchester.

By the 1880s, however, Kemp had fallen on hard times.  The once-affluent farmer had lost his health, his wealth and most of his personal property.  His first wife had died, and an ill-advised second marriage had ended in divorce.  According to an 1882 history of Randolph County, “Mr. Kemp is now in feeble health …and he now finds himself in his old age a poor man.”

Despite his dwindling fortune, Kemp refused to sell his State Fair prize for the value of the silver. It was passed down to his grandchildren, who carefully tucked a note inside the cup explaining the cup’s significance to their family.  Then they sold it. 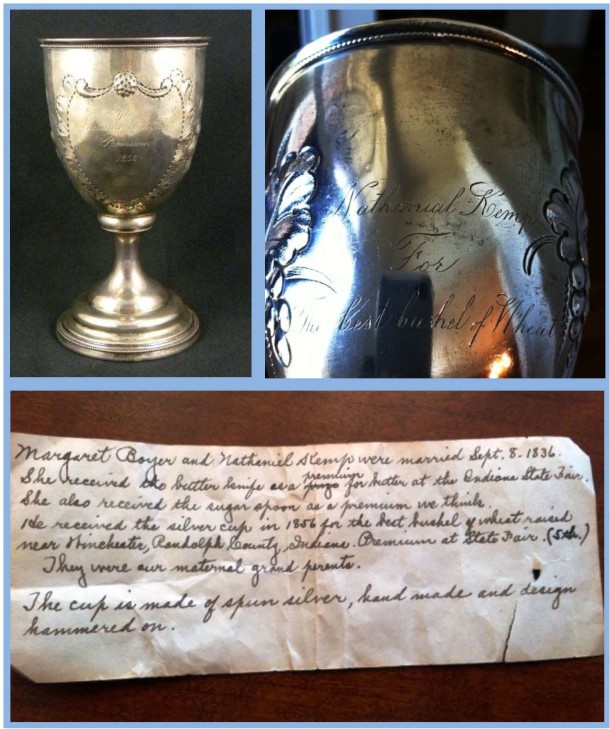 Over the past century, Nathaniel Kemp’s most cherished possession has changed hands an unknown number of times. Its current caretaker is collector David Yount.

The late billionaire Malcolm Forbes had a collection of similar discarded trophies.  He dubbed his collection, “The Mortality of Immortality,”  because he was fascinated by how each trophy represented a highlight of someone’s life, yet was discarded or sold after the winner died.  Unfortunately, such was the fate of Forbes’ own collection of other people’s trophies.  It was sold at auction in 2011 for more than $1 million.

Although it’s unlikely that Forbes owned the silver cup that Gatling gun inventor R.J. Gatling won at the 1855 Indiana State Fair for his essay on “ditching and draining,” or the silver tea spoons that Miss Alice Williams took back to Muncie for her prize-winnng “tippets,” silver premiums from the State Fair are highly sought after by collectors and would not have been out of place in Forbes’ collection. 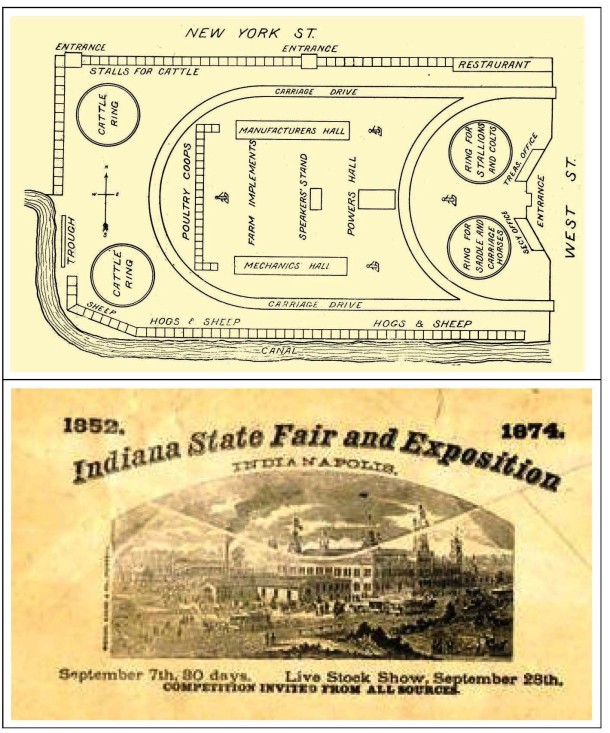 Pictured above is the site plan for the first State Fair, held in Military Park. The image shown at the bottom is from the back of an envelope promoting the new Exposition Building. The empty envelope recently sold on eBay for $28.

Indiana’s first state fair was held in October 1852 on the grounds of Military Park. There were 15,000 visitors the first day, 25,000 on the second, and by the third day the fair crowds had overflowed to every corner of the city where a wide variety of sideshows were providing entertainment. Farmers from Indiana and Kentucky flocked to the fair to show their stock and marvel at the latest advances in farm machinery, while women were awestruck by a wonderful invention that would free up hours in their day – the Singer sewing machine.

Other cities clamored for their fair share of the State Fair’s bounty, so the event was moved to Lafayette in 1853 and Madison in 1854.  Both proved to be a financial flop, so the State Fair returned to Indianapolis in 1855.

By 1860, the State Fair had outgrown Military Park, so the managers purchased 36 acres north of the city in an area known as the Otis Grove. As the Civil War heated up, however, the site of the fair’s festivities was turned into Camp Morton, a military prison for Confederate soldiers.

After the war ended, the State Fair returned with new vigor to the Camp Morton site. As the State Fair gained in popularity as a tourist attraction, the State Board of Agriculture hired architect Edwin May (who later designed the Statehouse) to design an enormous Exposition Building that opened in 1873 on the corner of 19th and Alabama Streets.  In addition to serving as a showcase for agriculture and technology, the 1873 Exposition also featured museum-type exhibits of giant tortoise shells and dinosaur skeletons. 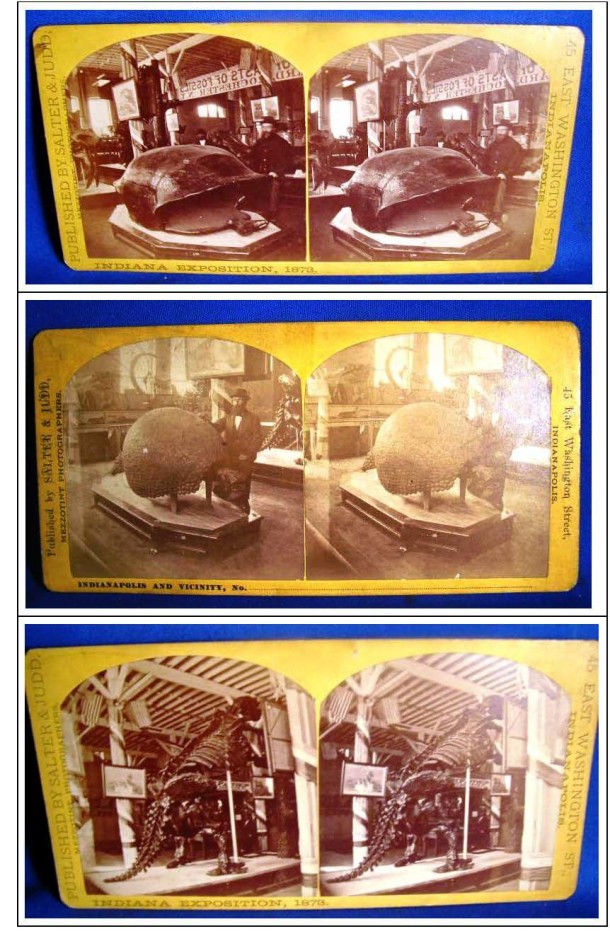 The State Fair also served as sort of an early home show, featuring the latest trends in home decoration, flower arrangement, and gardens. A group of stereoviews from the 1873 garden exhibit recently sold on eBay. Prices ranged from $19 to $52 per card. 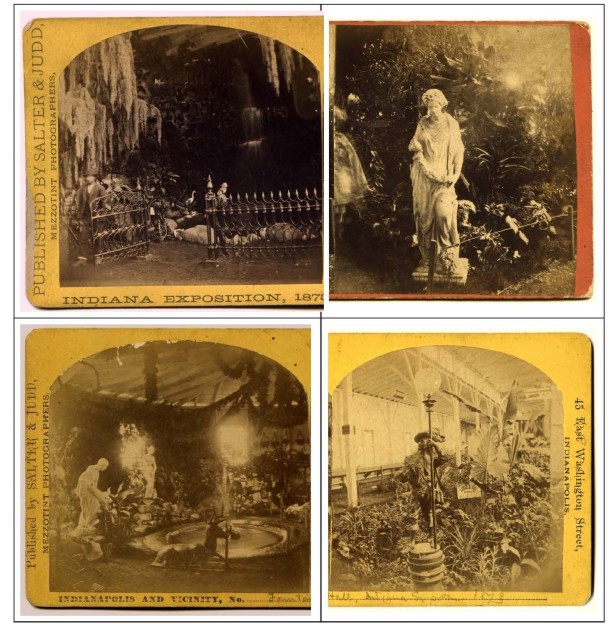 Since its inception in 1852, premiums have been a critical component of the Indiana State Fair, which was established to help encourage improvements in agriculture, stock production and farm machinery through the award of prizes. By 1855, the categories had expanded to include furniture-making, paintings and drawings, as well as “useful and ornamental” items such as chair tidies, ottoman covers and toilet cushions. Prizes ranged from coin silver pitchers to paper diplomas, with silver cups awarded as the highest prize in most categories. 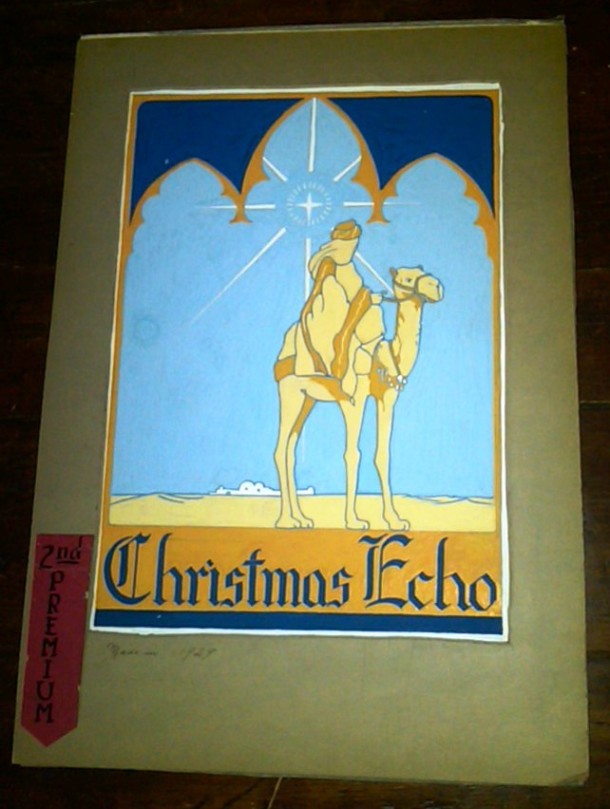 Although engraved premiums help preserve a winner’s place in history, the mere fact that an item has been displayed at the State Fair often preserves it for posterity. As shown above, June Woodworth won a 2nd Premium with her cover art for the 1929 Christmas issue of the Echo, the daily newspaper for Shortridge High School.  E. J. Mousley exhibited his pencil drawing of a Second Empire house at the 1937 State Fair.  Mousley lived at 2921 N. Pennsylvania, but it’s likely that the long-gone house in the drawing was located south of 16th Street. Both Woodworth’s painting and Mousley’s sketch are interesting pieces of Indianapolis’ past that may not have survived but for their State Fair connection. 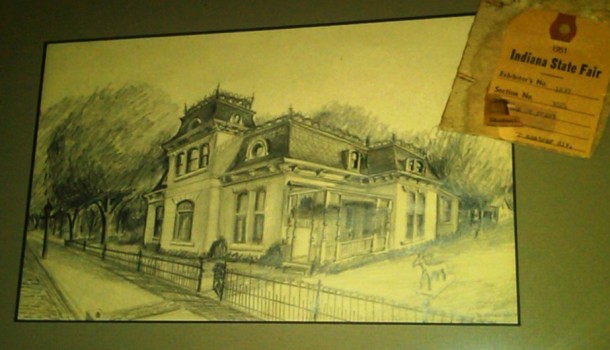 Winners will often go to great lengths to preserve their prize-winning item.  Indianapolis attorney John Keeler currently has this giant ear of corn in safekeeping for his children, who inherited it through their maternal grandparents.  Although no one in the family can recall the exact year when the corn was exhibited at the State Fair, its custom-made glass display case has protected it from the perils that typically befall extremely large vegetables and has ensured its survival for future generations. 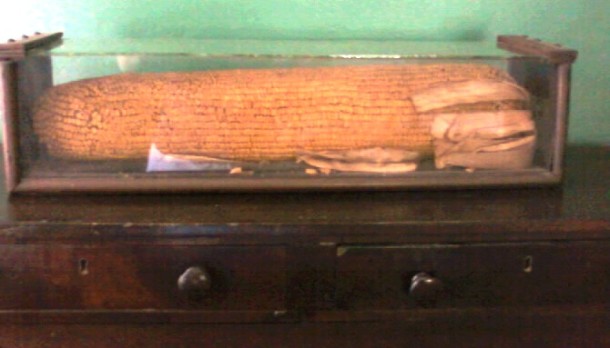 Posters are one of the most elusive State Fair collectibles.  Too large to be saved in a scrapbook and too flimsy to survive without framing, most State Fair posters ended up in the trash when the event concluded.  David Yount had searched unsuccessfully for a number of years until the posters shown in this article surfaced at an auction in 2011.  Although a couple of the posters have staining and paper loss, they’re still prized because of their rarity. 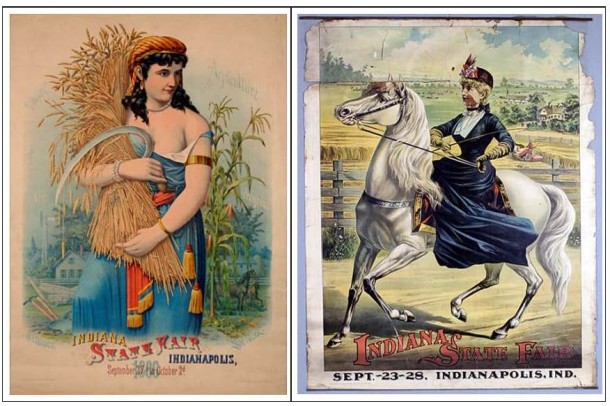 Thanks to their small size, State Fair ribbons were more likely to survive the years, tucked away with other easily stored mementos. The ribbon on the far left is from the second State Fair, which was held in Lafayette in 1853. The 1856 ribbon would have been worn by a member of the State Agricultural Society, and the 1878 ribbon by a member of the press.  Ribbons for the State Fair and other events can sometimes be found in old books because they made convenient bookmarks. 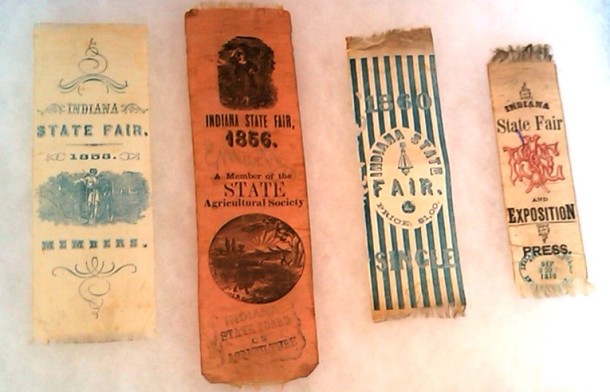 State Fair tokens featuring the Exposition Building were produced during the years when the event was held in Herron-Morton. Tiffany Benedict-Berkson has assembled a small collection of these tokens, a couple of which had been drilled by former owners for use as a charm. 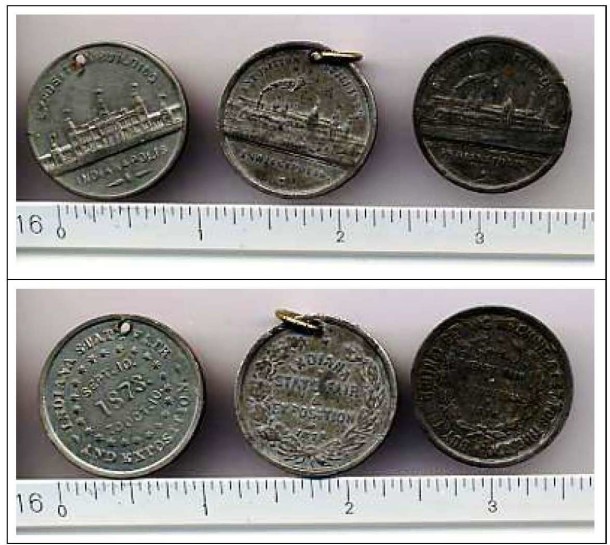 Souvenirs were also available for purchase at the State Fair. A fairgoer in the 1920s or ’30s would likely have paid a fraction of the $20 I paid when I found this pennant at an antique mall in Salem in 2011.  Although I do not collect State Fair items, the pennant is a fun addition to my collection of Statehouse images.

There’s no doubt, however, that the hottest ticket in State Fair collectibles is a ticket to the Beatles concert in 1964. The Fab Four held two shows in Indianapolis. Although ticket stubs crop up from time to time, David Yount has managed to track down some of the really scarce items, such as the invitation to the Beatles’ press conference. 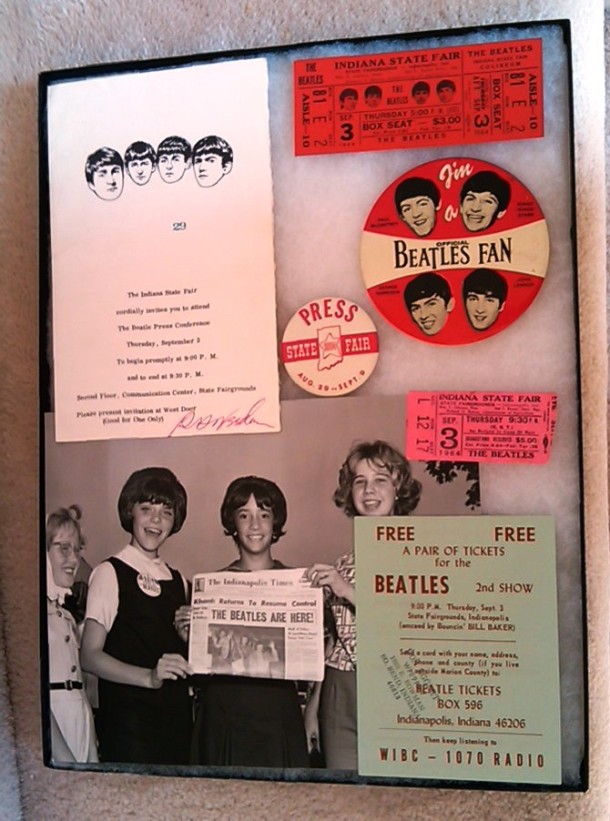 State Fair collectibles are fascinating because they are as varied and diverse as the people who have participated in the 162-year-old Indiana tradition. Whether it’s an ear of corn raised during the Depression on an Indiana farm or a note on a ticket stub reminiscing about the night an Indiana teenager was mistaken for Ringo Starr,  there’s a State Fair souvenir for every Hoosier. Or as Pat Boone sung in 1962:

Our State Fair is a great state fair

Don’t miss it don’t even be late…

It’s dollars to doughnuts at our state fair

It’s the best state fair.. in our state 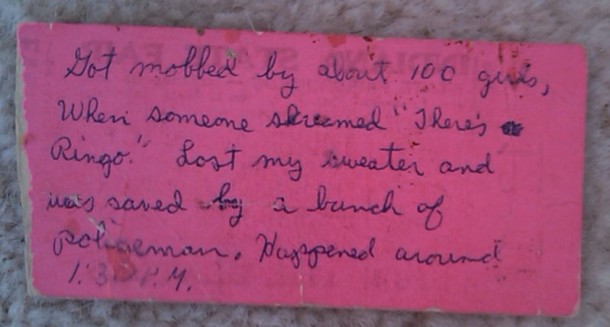