The English Opera House opened to accolades on September 27, 1880, with famed Shakespearean actor Lawrence Barrett appearing in the role of Hamlet. But enough about the theater.

Today’s article is about The Theatre – or more specifically, those places of public amusement in 19th century Indianapolis where transposing the “r” and the “e” helped lend an air of respectability to the acrobats, minstrels, comedians and assorted “dances of doubtful decency” that delighted the beer-swilling crowds.

What’s more fun –- watching a guy in tights ponder whether to be or not to be, or watching the only American Double Acrobatic High Pedestal Clog Dancers throwing Backward Somersaults together while dancing in front of the stage on a 5-foot pedestal? Seriously?

I was blissfully unaware that such places even existed until I stumbled across a faded broadside for a venue on East Washington Street called Crone’s Garden Theatre.

I’d never heard of Crone’s, nor of any of the performers featured on the broadside. Top billing was given to Punch Walton, the “Master of Mirth and Embassador of Momus,” who would be making his first appearance in Indianapolis on Monday, June 16, 1879. Other performers included Queen and Bell (“The only American Double Acrobatic High Pedestal Clog Dancers”) and the D’Alve Sisters (“the Most Charming and Refined Artists in the Vaudeville Profession”).

Tattered and stained, the broadside looked like an old “Wanted” poster, replete with patriotic stars, mismatched typefaces, and the ubiquitous pointed finger. The overall impact was so absurd, I figured it must be a fake. 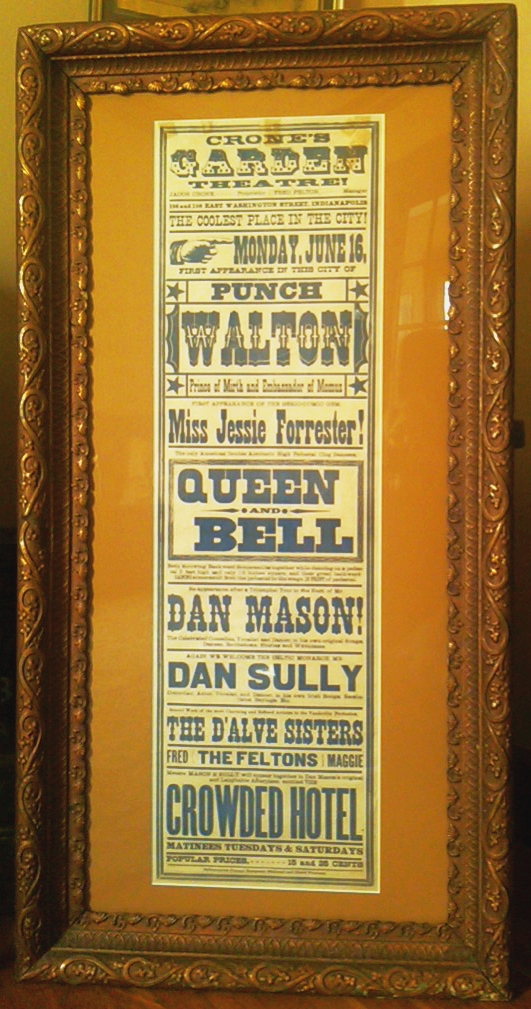 I purchased the unframed broadside on ebay in 2009 for less than $50. The fragile poster had managed to survive intact for 130 years because it had been stored in a trunk belonging to Dan Mason, a singer and comedian who performed at Crone’s. The ebay seller bought it from a descendant of Mason at an auction in Pennsylvania. A similar broadside for the Metropolitan sold last year on ebay for several hundred dollars.

It’s not unusual for collectors of printed materials to run across so-called “fantasy” items – objects designed for the collectibles market that advertise places or products that never existed. Since I hadn’t heard of Crone’s Garden Theatre nor any of the famous performers featured on the broadside, I decided to do some scholarly research (i.e., Google), and quickly found the following glowing review from a 1911 article in the Indiana Magazine of History:

“The Met, Crone’s, Atlantic Garden, the Zoo, and the Adelphi were low theaters which, at various periods, contributed their mites to the demoralization of the city.”

Historian Berry Sulgrove was even less kind in his 1880 history of Indianapolis, noting that garden establishments such as Crone’s were “beer-swilling conveniences” of rather equivocal character when not “openly vicious.”

Although an evening of beer, comedy, and clog-dancing acrobats may not seem offensive to our 21st century sensibilities, even the legitimate theater struggled to gain a respectable foothold in 19th century Indianapolis. When Valentine Butsch (related to HI writer Sharon Butsch Freeland) opened the city’s first real theater in 1857 – the Metropolitan at the corner of Tennessee and Washington Streets — the first season was a flop. The oldest, wealthiest and most respected citizens boycotted the new enterprise, despite the obvious draw of such stars as Sallie St. Clair, described by Indianapolis historian W.R. Holloway as “the leader of the ‘naked school’”.

In an effort to gain respectability, the manager offered a $500 donation to the Widows and Orphans’ Society. This generous contribution was promptly declined because the Society doubted the “moral tendency” of stage exhibitions. By the 1870s, however, city elders were beginning to outgrow their provincial distrust of the theater, as evidenced by the fact that an amateur troupe performed at the Opera Hall for two consecutive nights for the benefit of the same society that had spurned theatricals a decade earlier. 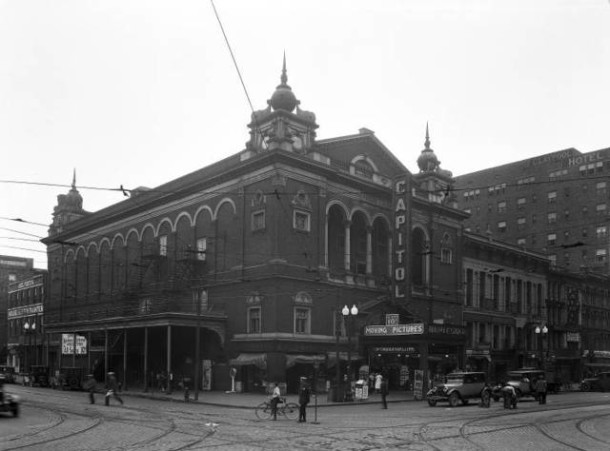 Butsch closed the Metropolitan in 1868 and transferred his management to the newly built Academy of Music on the southeast corner of Illinois and Ohio streets. The Metropolitan subsequently reopened as a varieties and minstrel hall, plunging at times to artistic depths even lower than those achieved by its chief competitor, Crone’s Garden Theatre.

In a review of a troupe appearing at the Metropolitan called the Daisy Remington Blondes, the New York Mirror noted that “[t]he vulgarisms indulged in by the end men deserve condemnation. Performers that … descend to such efforts to raise a laugh should be driven from the profession.” At the same time, the reviewer heaped high praise on the Crone’s presentation of Oliver Twist, calling the performance by Fred and Maggie Felton “well presented and admirable acted.”

The Metropolitan burned in a 1897 fire, and was rebuilt as the Park Theater. After the fire, the theater went through a series of different owners and names until it opened as the Capitol Theater in 1923. The lights finally went dark on the site of Indianapolis’ oldest theater on September 17, 1935.

Punch Walton was a popular performer in the 1870s-80s who billed himself as the “Prince of Mirth and Embassador of Momus.” Momus is the Greek god of mockery and is not to be confused with the mythological “Pompatus of Love.”

The co-owners of Crone’s Garden Theatre, Fred Felton and Jacob Crone, were not the first business owners to come up with the concept of combining entertainment with a garden setting. The city’s first pleasure garden was on the corner of Tennessee and Georgia streets, and featured fruit trees, graveled walks, flower beds, and the first ice-house ever built for public use in Indianapolis. Another garden was on Washington Street and was established by the city’s earliest ice cream and confectionary makers. By the late 1870s, however, beer gardens featuring variety acts began sprouting up.

In an effort to stop this scourge on the city’s morality, the council adopted an ordinance prohibiting the dangerous combination of beer and variety shows. Crone’s Garden Theatre closed briefly for remodeling in May 1878, and The Indianapolis News reported that the theater was likely to meet with strong opposition when it reopened, noting that “[t]he other amusement furnishers of the city propose to see that the ordinance regulating theaters and places of public amusements is enforced.” Crone’s apparently survived the skirmish, however, and lasted until the early 1880s, when it played a pivotal role in the stage career of one of America’s most popular songwriters.

Aaron Gumbinsky – who later changed his name to Harry Von Tilzer – grew up above his father’s “Hair Goods” shop at 215 E. Washington. One evening, young Harry crept out of his bedroom and crossed the street to Crone’s Garden Theatre, which was holding a greasy pole contest. He hid backstage until he could enter as the last contestant, which he surmised would be the most favorable “pole position” because much of the grease would be wiped off by previous climbers. The tactic worked. Harry won the prize – a $5 gold piece – and climbed back down the pole determined to be a great actor.

Although Harry’s initial attempt at age 12 to run away and join the Barnum & Bailey Circus failed miserably when he was returned to his parents the next day by a sheriff, he arrived in New York City a few years later after he offered to escort a trainload of horses and mules. He kept food on the table by performing as a “professor” in various saloons and honky-tonks, and finally got his first song published in 1899.

In 1903, Von Tilzer founded a successful music publishing house, personally penning a number of hits, including “Wait ‘Til the Sun Shines, Nellie.” Before his death in New York City in 1946, he had become the first vaudeville performer to top $1,000 a week. His younger brother, Albert, also contributed to the family’s musical legacy as the songwriter for “Take Me Out to the Ball Game.” 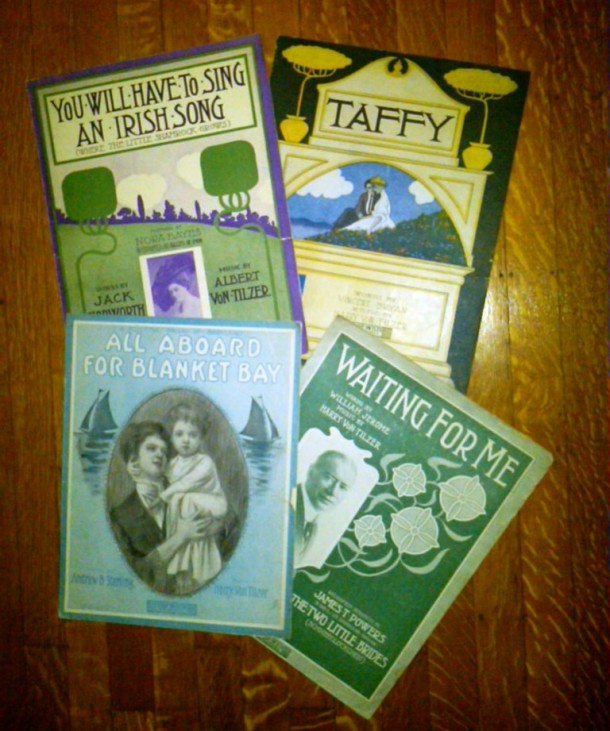 Libby Cierzniak has been traveling out of state this week, so today’s article is an updated version of an article she originally posted in April 2012. For more delightful tales of Indy’s early “theatres,” check out “The Theater in Indianapolis before 1880,” Indiana Magazine of History (1955).