In the fall of 2011, Indianapolis Downtown Inc. sparked a Facebook frenzy when it launched a contest to rename Georgia Street.  According to a spokesman for Mayor Greg Ballard, the goal of the proposed “re-branding” was to create a “signature” name for the new pedestrian mall that would be recognized nationally, even internationally.

The effort resulted in plenty of signatures, but not the kind sought by Indianapolis Downtown Inc. Instead, a Facebook petition drive created by HI’s own Joan Hostetler yielded hundreds of signatures from re-branding opponents. 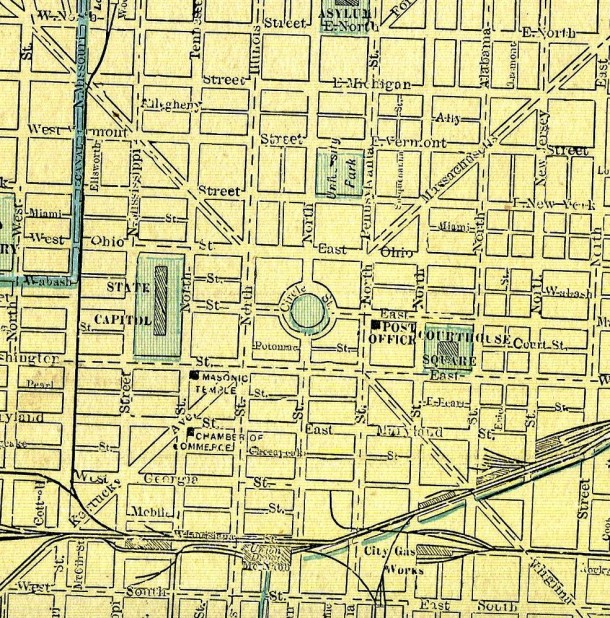 The Mile Square as depicted on a circa-1890 map

I got to thinking about the Georgia Street debacle a couple of weeks ago when I found a circa-1890 Indianapolis map in an antique store on Cape Cod.  Although I could spot familiar thoroughfares such as Meridian, Pennsylvania and Delaware, many of the side streets bore unfamiliar names.  This made me wonder whether the people who lived and worked on these streets had rallied against the new names in a show of collective road rage. Or was the Georgia Street fracas a Facebook-era phenomenon?

For the first 70 years of the city’s life, the pioneer-era Ralston plan remained remarkably intact, at least within its original Mile Square borders.  But its age was beginning to show as Indianapolis approached the dawn of the 20th century.  In early 1893, an ordinance was introduced to rename Tennessee Street in honor of the new state capitol.  The initial proposal was quickly defeated, but by 1894, the Capitol Avenue moniker had gained sufficient support to pass the city council over the objections of Councilor Ryan, who decried the switch from Ralston’s system of naming the streets west of Meridian for the western states, and the streets east of Meridian for the eastern states.

The following year, Mississippi Street was renamed Senate Avenue.  The Indianapolis News — which less than a year earlier had endorsed the Capitol Avenue ordinance — took a sharp turn and lamented the loss of Mississippi Street’s “historic” name, blaming it on the “unfortunate precedent” set by the Tennessee Street switch. 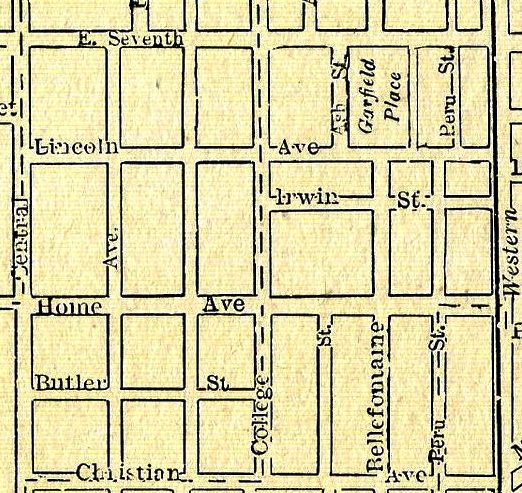 The eastern portion of the Old Northside historic district in 1890.

The News’ sudden allegiance to the Ralston plan may have been reflective of other changes that were going on in Indianapolis in the mid-1890s. The city was annexing former suburban neighborhoods, and planners saw the need for a coherent system of street names to replace the often whimsical names selected when the suburban streets were initially platted.

Ovid Butler’s subdivision in the area now called the Old Northside was a specific target of name-change advocates.  When Butler platted his subdivision in the late 1860s, he selected names for the east-west streets running between Central and College from 11th to 16th Streets. Christian Avenue was named after North Western Christian University, the college founded by Butler in 1850.  Home Avenue was the eponymous name for the street where Butler built his home in the 1840s.  One street was named for the Butler family, and another for President Lincoln.

Although the college was renamed in Butler’s honor when it relocated to Irvington in the 1870s, less than two decades later the city swept almost all traces of Ovid Butler from the streets of the Old Northside. An ordinance was adopted in 1896 that renamed  Christian Avenue, Butler Street, Home Avenue and Lincoln Avenue as 11th, 12th, 13th and 15th streets, respectively.  Only College Avenue retained its name as a reminder of the place where Butler University had first opened its doors some 50 years earlier. 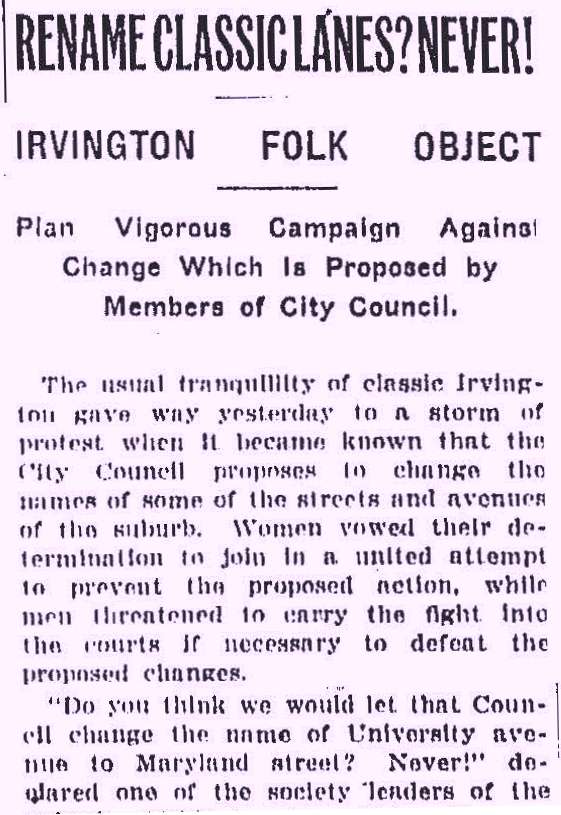 In 1911, Butler University’s Irvington home faced the same threat from city planners who sought to align its street names with those used in downtown Indianapolis in order to eliminate confusion for postal carriers and make it easier for customers to find local businesses. As reported by The Indianapolis Star, the Irvington community rallied to fight the proposed changes. “Do you think we would let that council change the name of University Avenue to Maryland Street? Never!” declared an angry Irvingtonian.  The neighborhood prevailed, and University Avenue still winds through Irvington, although the college for which it was name was relocated to 46th and Sunset in the 1920s.

The residents of Washington Boulevard also beat city hall in its attempt to rename the fashionable northside thoroughfare after its downtown counterpart, Alabama Street.  In May 1911, the city council passed an ordinance that renamed scores of local streets where no serious objection had been tendered to the proposed change.  However, the decision whether to change the name of Washington Boulevard – the home to some of the city’s wealthiest, most politically influential and now angriest residents – was delegated to the local postmaster, who had initially requested the name change.  Not surprisingly, the postmaster decided to take the path of least resistance and leave the boulevard’s name intact. 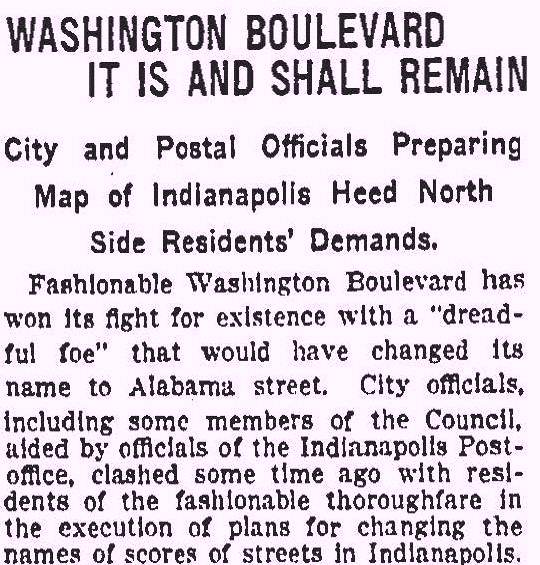 Park Avenue residents also proved that they had the power to be a game changer in the name-change debate.  In June 1911, a “call to arms” was issued to residents of Park Avenue between 17th and 21st streets, who reportedly gathered on a neighbor’s lawn and “marched militantly” in a throng of anywhere from 20 to 200 people to the home of Charles Copeland, their city councilor. Copeland chaired the council’s Committee on Investigations and Impeachment, which for some inexplicable reason was the panel charged with considering the proposed street names.

Although Copeland’s response was “noncommittal,” the neighbors’ appeal was successful and the five-block stretch of Park Avenue retained its name. That is, until Park Avenue was partially vacated some 50 years later and turned into an actual park.

Park Avenue from 18th to 21st streets, as it appeared on the 1915 Sanborn map. (Click to enlarge)

In the midst of the Park Avenue war of 1911, Mrs. Nannie Morris Haines of 1635 North Delaware reminded readers of The Indianapolis Star that the name-change game was a two-way street.  Haines’ father, John D. Morris, built the Morris-Butler House which still stands at Park Avenue and 12th Street.  When the family moved to their new home in the 1860s, however, its address was the corner of Butler and Jackson, the names originally given to the streets by Ovid Butler when he platted the neighborhood.

Mrs. Morris was not happy that her elegant new mansion fronted Jackson Street.  She had recently visited a sister who lived on Park Avenue in Chicago, and decided that her home needed a Park Avenue address.  The name was fitting, she believed, because the street was park-like in its appearance, running through thick rows of trees until it disappeared into the woods on the edge of town at 7th (now 16th) street.

When the name change was proposed to Mayor Dan McCauley, he said he would grant the Morris family’s request if 13-year-old Nannie and her brother David could get the residents of Jackson Street to sign a petition in favor of changing its name to Park Avenue.  The children were successful, and the name was changed to Park in the late 1860s. 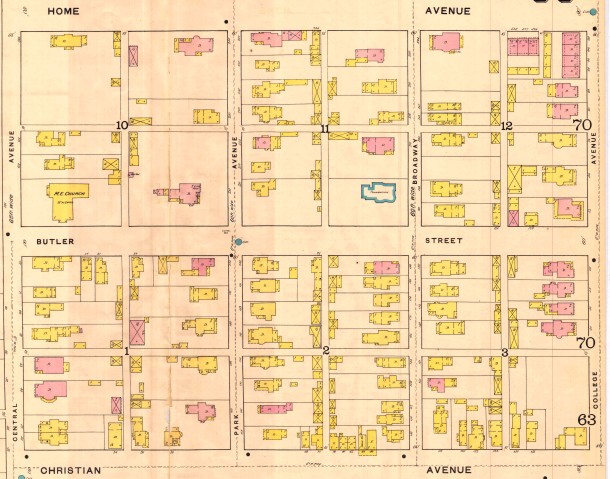 The Morris-Butler house and surrounding streets, as shown in the 1887 Sanborn map. Butler Avenue (now 12th Street) east of Park is now covered by the interstate, along with all three blocks south to Christian.

In 1919, property owners on Meridian Street between Monument Circle and the Canal attempted to use their powers of persuasion to change both the name and the character of the city’s main stem. Irritated by the noise from heavy traffic and concerned about the lack of standards for new commercial buildings, they formed an association for the purpose of putting Meridian Street under the jurisdiction of the park board and turning it into restricted-traffic boulevard.

One of the strongest proponents of the boulevard plan was Joseph Rink, who had built a $100,000 mansion on the northeast corner of 21st and Meridian only to have his view of the streetscape obliterated by adjacent apartments that were built flush to the street.  Rink and other property owners sought a mandatory setback along the Meridian corridor that would be landscaped in a park-like manner. 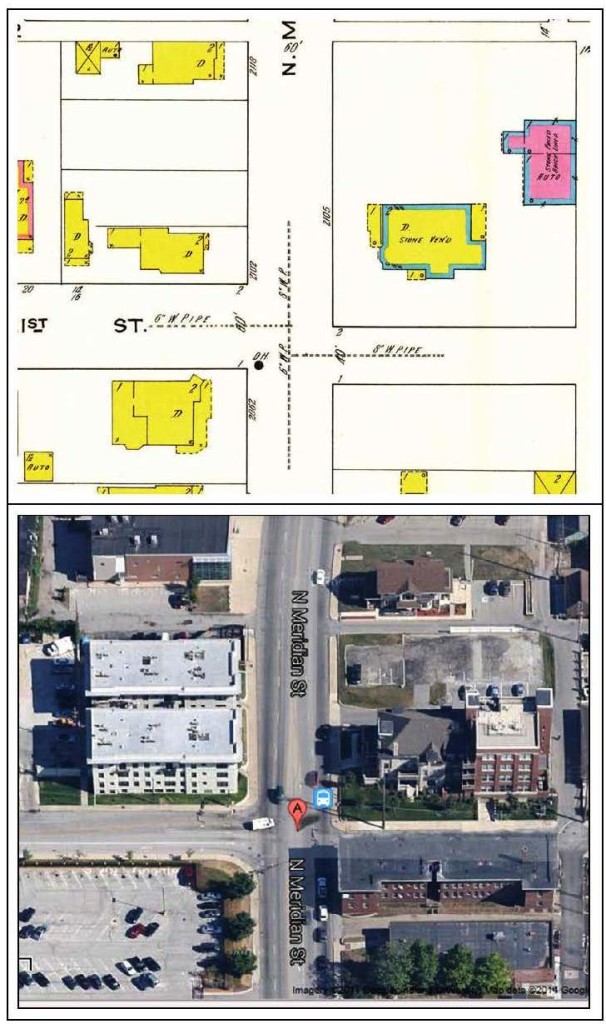 The corner of 21st and Meridian as shown on the 1915 Sanborn map and in a present-day Google street view. Both Rink’s stone mansion and the offending apartment building are still standing.

But as the merits of the Meridian Street boulevard proposal were debated, the line in the sand drawn by the property owners kept shifting north. Any discussion of converting the central business district into a boulevard was soon dropped from the plan.  By July 1919, owners of the massive homes between 14th and 16th streets had also defected as they saw the lucrative opportunity to sell their properties for redevelopment.  A remonstrance was mounted, and the boulevard plan was declared dead by proponents, who criticized the park board for its “spineless” lack of action.

Although the property owners may have lost the battle, a few months later they were able to claim a partial victory in the war when the park board assumed jurisdiction over Meridian Street between Fall Creek and the canal. A 25-foot building line restriction was imposed for new construction on both sides of the street.  These standards and other safeguards to preserve the character of North Meridian Street were subsequently codified by the City Council in the mid-1920s. 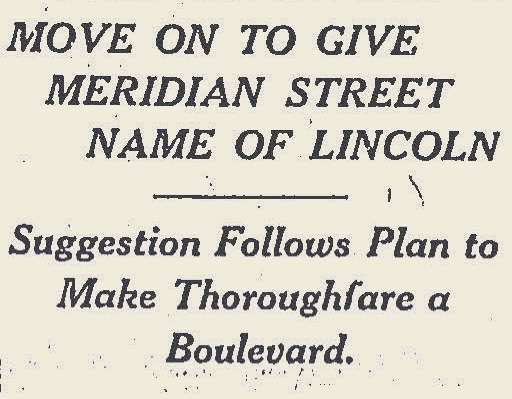 When the plan to convert Meridian Street to a boulevard was first proposed in 1919, the idea of changing the street’s name to “Lincoln Boulevard” was also floated.  Since the city’s main east-west artery was named after George Washington, proponents maintained, it made sense to name the primary north-south street after Abraham Lincoln.

The Indianapolis Star came out in strong opposition to the proposal which “would add very little to the fame of the martyr president and .. detract very materially from the distinctive character of one of the middle West’s finest residence streets.” As the Star noted, nearly every city in America has a street, avenue or boulevard named after Abraham Lincoln, but Indianapolis was nearly unique with a main street called “Meridian.”

It’s hard to imagine Meridian Street with another name. Or as Heywood Banks sang in his classic song, “Indianapolis”:

Meridian Street, you are a’calling me.  Hey hey you! Hey you hey hey!

You can hear the song here.