Shortly before midnight on Thursday, January 21, 1892, a fire alarm was sounded from Box 92 in the heart of Indianapolis’ wholesale district. A few minutes later, Box 52 at Illinois and Georgia Streets was pulled. A fireman who was working that evening later told the Indianapolis News that the fire department instantly suspected serious trouble.   Box 52 was in front of the National Surgical Institute, a crowded orthopedic hospital located in old four-story hotel  “which has been looked upon for years as a dangerous place.”

The firemen’s worst fears were realized when they arrived at the Institute less than two minutes later to find the entire east wing ablaze and patients hanging from every window, screaming for help. By the time the smoke cleared, 19 patients had perished, including three who lept to their death to escape the flames.

On the night of the fire, more than 300 patients — many suffering from paralysis or other serious disabilities — were entrusted to the Institute’s care. As recounted in the News, “their rescue, the fight with the flames and the final discovery of the charred remains of many poor dead inmates, wrapped in each other’s withered arms, makes a story rarely paralleled in the annals of modern cities.” 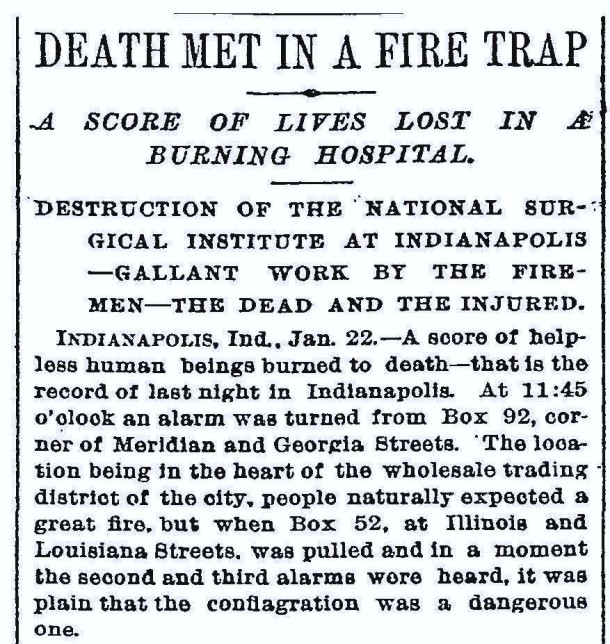 I’ll leave that story for others to tell. Today’s article is about what happened AFTER the fire – the blame, the shame and stain that followed the names of those associated with one of the most heart-wrenching tragedies in Indianapolis history.

First, a little background. The National Surgical Institute was established in 1858 in Charlestown, Illinois, by Dr. Horace R. Allen, an astute businessman and by all accounts a gifted and visionary physician. In 1869, Allen relocated the Institute to Indianapolis, where he purchased two four-story buildings at the southeast corner of Georgia and Illinois Streets.  The enterprise flourished, and Allen soon opened branches in Philadelphia, Atlanta and San Francisco. But the Indianapolis location remained the flagship hospital, drawing more than 10,000 people each year to the city to visit friends and family who were receiving treatment at the hospital. 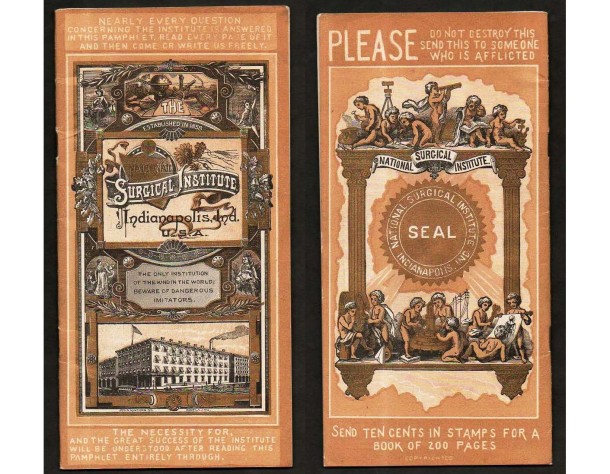 I recently saw a brochure for the Institute sell for $47 on eBay.  The pamphlet, shown above, claims that the Insitute, which was “Established for the Cure of the Lame and Deformed,” is the “Oldest and Largest of its Kind in America.” Amid page after page of illustrations of men, women and children afflicted with all manner of disabilities and deformities, the pamphlet boasts that “The Paralyzed Have Been Made to Walk , and Those Who Suffered Have Been Relieved by It.” 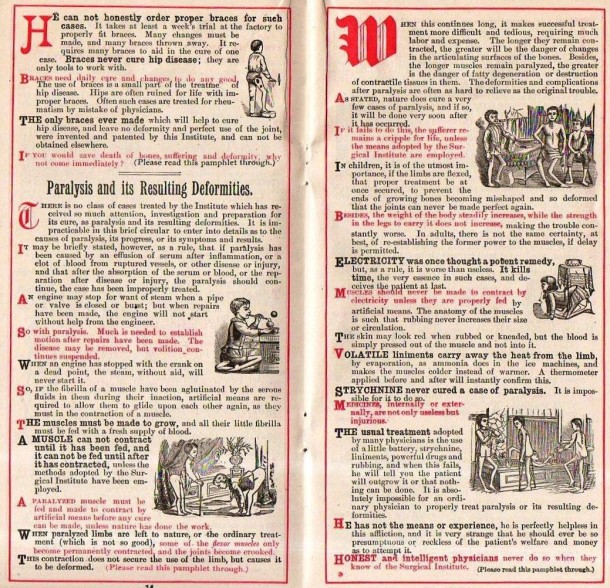 Allen soon made a fortune from his orthopedic hospital chain and other business ventures, and in 1880 he and his wife purchased one of the most ostentatious homes in the city. Constructed in 1875 by Hervey Bates, Jr., the elaborate brick and stone mansion with its multiple turrets and gables was fashioned in the style of a French chateau. Some years later, Booth Tarkington would use Allen’s house as the model for Amberson Mansion in his Pulitizer-prize winning novel, The Magnificent Ambersons. 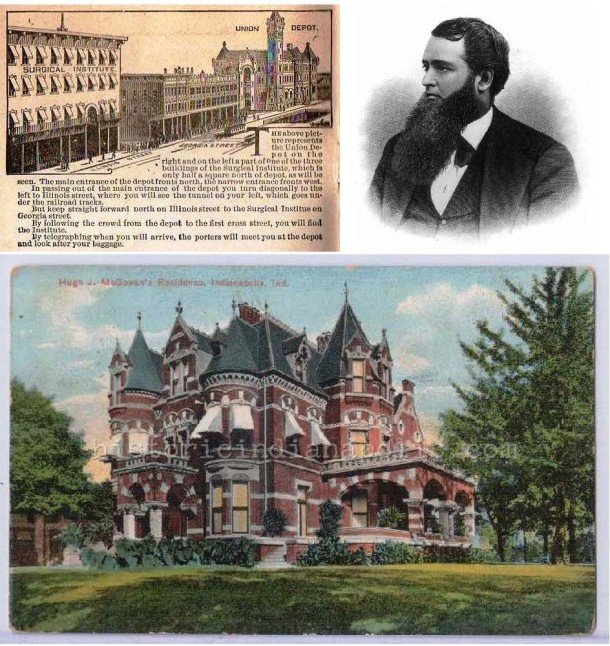 Pictured above are an illustration from the advertising pamphlet showing the convenient location of the National Surgical Institute, an engraving of Dr. Allen, and a postcard of Allen’s home, which was later owned by Hugh McGowan, a farm boy who made his fortune in street railways. Although Allen enjoyed an active practice as a surgeon, apparently surgical masks were not widely used in those days, given his abundance of facial hair.

Although Allen was a pillar of the community and well-known for the thousands of dollars of charity care he provided each year at the Institute, he was instantly villified in the aftermath of the horrific fire. The tragedy played out in much the same way as we have seen other, more recent catastrophies unwind.  First the finger-pointing, then the blame shifting, and finally the belated calls for reform by indignant public officials — all reported in lurid detail by the media for curious readers who wait in breathless anticipation for each new tidbit of information.

The fire was reported shortly before midnight on Thursday.  By mid-afternoon Friday, the News was reporting that the building was a known firetrap and that the proprietors, Drs. Allen and Wilson, had renewed their insurance policies just one day earlier.  The fire chief told reporters that he had long since feared a fire at the Institute and more than once had called attention to the issue. He called for an immediate change to the law that would require similar institutions to be fireproof and no more than two stories high.

By Saturday, the fire continued to be the sole topic of discussion in Indianapolis. All of the bodies had been removed from the rubble at that point, but several of the injured were still clinging to life, including little Lottie Lazarus, a 7-year-old girl from Iowa whose mother plunged to death clutching the child in her arms. The Institute was decried as a house of horrors, filled with steep staircases, winding corridors, and patients strapped in their beds, unable to save themselves from the raging inferno. The coronor announced that he would launch a full investigation on Monday.

But the real shocker came when Allen and Wilson  announced that they planned to repair the buildings instead of razing them to the ground and erecting fireproof buildings.  The News reported that on Friday, Allen had even gone so far as to obtain a building permit.  City Building Inspector Fitchey called Allen’s decision to get a permit “unchristian” and stated indignantly that he would not permit a dollar’s worth of repairs or improvement until he had thoroughly inspected the ruins. The reporter who wrote the story for the News found this latter comment to be ironic, given the fact that Fitchey had never met Allen before that morning and had never bothered to inspect the building while it was standing. 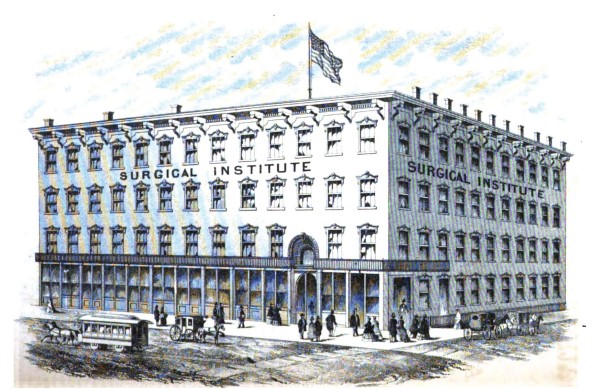 By late afternoon Saturday, a tide of negative public opinion forced Allen and Wilson to abandon their plans to rebuild. In fact, as the day wore on, Allen issued a statement to the News in which he attempted to debunk the  “rumors” that the duo planned to rebuild at the same location. According to Allen, the Georgia Street property had become too valuable and should be used for another business purpose, and that it had always been their intention to build cottages on a large piece of ground away from the business portion of the city. He also said that he was comforted by the hundreds of telegrams he had received from former patients and their families from across the country that encouraged him to continue his cherished work despite the “unkind criticism” of the people of Indianapolis.

The following day, several of the city’s more prominent pastors used their bully pulpits in an effort to quell the mob mentality that had quickly pinned the blame for the catastrophe on Allen, and to a lesser extent, the building inspector who had allowed a hospital to be operated in the old hotel and the night watchman who had been slow to report the fire.   Rev. Cleveland at the Meridian Street church  said that “[w]hen we permit paralyzed infants and crippled women to be shut up in the fourth floor of a building in our midst….we may be sure that God will write murder opposite our names, whether we confess to it or not.” Cleveland told his parishioners that there was “no use in trying to evade it – you and I are to blame for the awful loss of life by burning that has taken place in our city.  We consented to those poor helpless people being crowded like sardines in a box on the fourth floor of that building. I bow my head in contrition and bitter shame before God that I did not lift my voice against it.”

The coronor’s hearing began on Monday.  Much of the initial testimony focused on the fire itself, with stories from survivors and their heroic rescuers.  Within a few days, however, the focus shifted as several architects and builders offered expert testimony on the condition of the building. Each one of them stated in sworn testimony that the building had a sufficient number of fire escapes, there were ample chemical fire extinquishers, and that the general arrangement of the hallways and stairs was appropriate for its use as a hospital.  One of the assistants to the chief fire engineer testified that even though it was an old building, the owners had made every provision for its occupants’ safety in the event of a fire.

As the days wore on, a less villianous portrait of Allen began to emerge. A local woman who had helped tend to the injured testified that the patients and their families spoke of Dr. Allen’s kindness, including the bereaved Mr. Lazarus, who had traveled to Indianapolis to recover his wife’s remains and sit at the bedside of his dying child.  The fireman who had earlier told reporters that the patients were strapped to their beds now testified that he had been misquoted and that he had simply carried out a dead body strapped to a stretcher.

The downtown library was closing last Saturday just as I was reading the microfilmed reports of the last day of the hearing. I didn’t have time this week to return to the library to read the coronor’s final report, but I don’t suppose it much matters. Regardless of whether Dr. Allen was exculpated – and he apparently was, because he later reopened the Institute at a new location — he will forever be associated with the tragic fire that claimed the lives of the patients he was trying to heal. 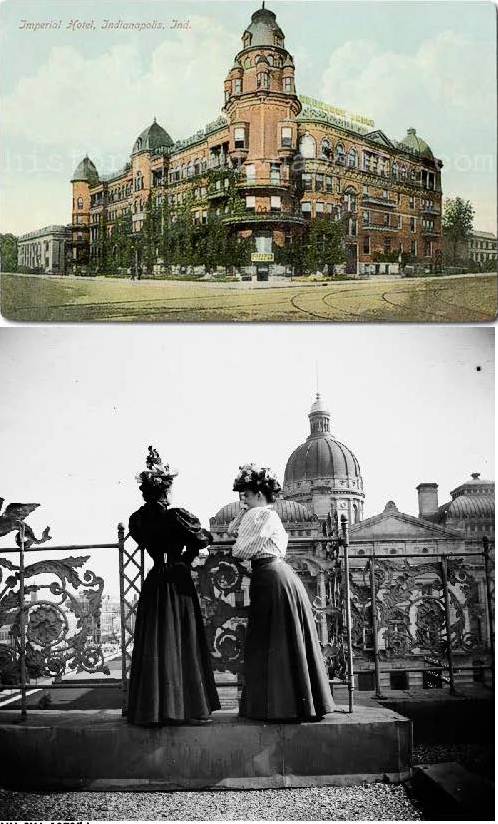 The lower photo, which is in the collection of the Indiana Historical Society, was taken from the rooftop of Dr. Allen’s new building, which later became the Imperial Hotel.

Allen rebuilt his Institute at the northwest corner of Capitol Avenue and Ohio Street, directly north of the Statehouse. But his practice never rebounded from the fire. In 1897, he sold his magnificent mansion to David Parry and moved to a smaller home at 1320 Delaware. The Institute went into receivership the following year. In 1900, Allen died of died of diabetes in Chicago, where he was working to establish a new hospital.