It’s a familiar scene from the movies. Boy meets girl. Boy and girl fall in love and decide to move in together. Girl takes one look around the living room and decides that if she’s going to move in, the beer posters, beer signs and beer cans are moving out. Everyone lives happily ever after – especially the guy who finds the beer can collection in the dumpster and has it appraised at the Antiques Roadshow for thousands of dollars.

If you ever find yourself in this situation, you may want to think twice before sending the beer can pyramid to curbside recycling. Today’s beer-related junk is tomorrow’s breweriana, a term coined in the 1970s for any object displaying the name of a brewery or brand of beer. Items made before the passage of Prohibition are generally the most valuable, but breweriana enthusiasts also collect specific types of beer advertising or focus on a specific region or brand. For example, a quick search of the internet yielded links to a collector who has more than 1,200 beer trays, a retailer that boasts the world’s largest inventory of vintage beer cans,and a website devoted entirely to tegestology, the art of collecting paper beer coasters.

The basic premise behind most breweriana has remained the same over the past century: Put a beer in the hands of a pretty girl, and you’ll sell more beer.

It also stands to reason that if a pretty girl in denim overalls is good for beer sales, a pretty girl who is scantily clad is even better. The Indianapolis Brewing Company trade cards shown below bear a risqué image at first glance, but when opened a more innocuous sight is revealed. The only difference between these cards and today’s beer ads is that in a modern ad, an even more risqué image is likely to appear when the card is opened. 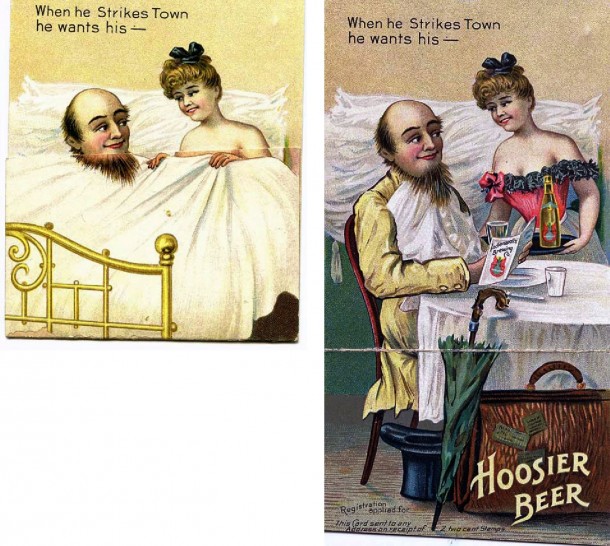 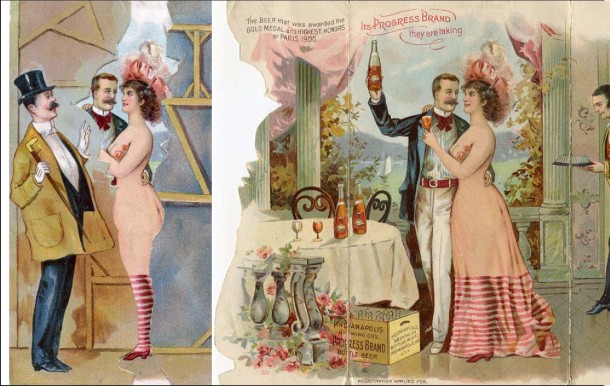 Images of pretty girls are not the only constant in the world of breweriana. Brewers have been slapping their name and slogans on beer trays, beer pitchers and beer glasses for more than 100 years. A few things have changed, however. The Indianapolis Brewing Company pitcher shown below features a winged woman raising a glass of beer above her head while riding what appears to be a unicycle. A beer ad using the same image today would bear a disclaimer telling beer drinkers DO NOT TRY THIS AT HOME. 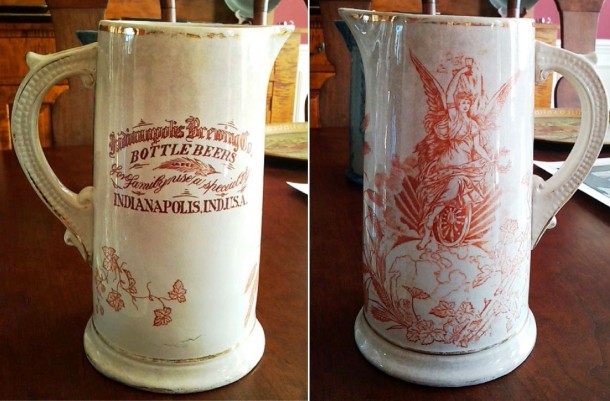 The same winged, unicycle-riding woman also appears on the Indianapolis Brewing Company tray shown below, only this time clad in a see-through gown and joined by a nearly naked female companion. While I’m sure that the wings and wheels hold some deep symbolic meaning, it’s my guess that the mostly-male beer drinking crowd never bothered to look any further than the scantily clad women to unravel the mystery. 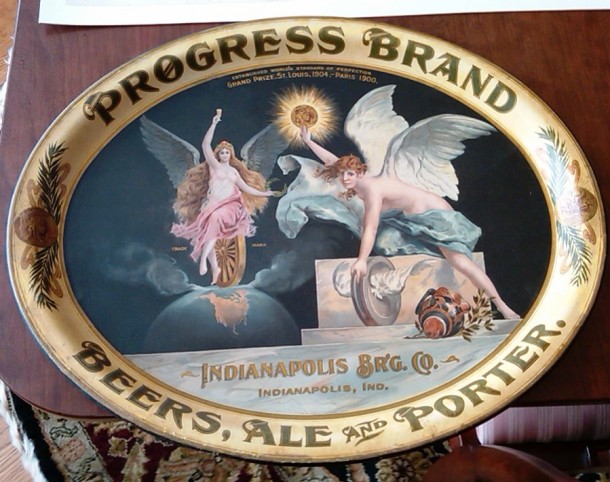 While today’s beer ads may feature babes with beers, some vintage beer ads also featured actual babies with beers. An ad slogan used by the Indianapolis Brewing Company in the early 1900s boasted “For family use a specialty”. While it’s doubtful that “family use” meant “give the baby a bottle of beer to stop the crying,” cherubic images of infants and toddler were commonly used by the brewery in it marketing materials.

Breweriana featuring images of the product or the brewery are generally more valued by collectors than generic advertising. For example, the Home Brewing tray below on the left features a generic imprint of a pretty college girl. It’s likely that the manufacturer produced a large number of these trays with the names of different brewers printed on the sides.

Although a little worse for the wear, the tray on the right is prized because it shows a rare view of a bottle of Home Brewing Company’s “Indiana” beer, which had a label featuring the then-new Soldiers’ and Sailors’ Monument. 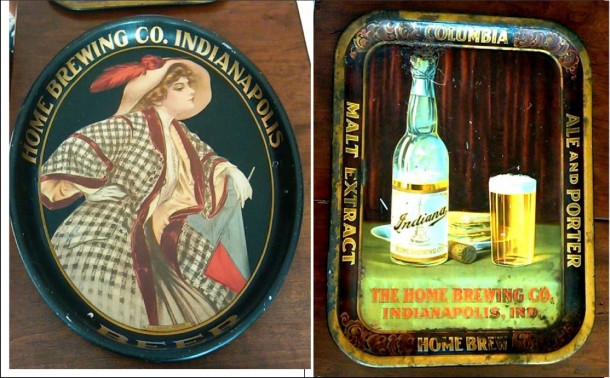 Beer trays were first produced in the 1890s, and remain popular with collectors. Trays can be found in almost any shape, but oval trays were most common in the pre-Prohibition era. Tray designs run the gamut from pretty girls to dead fowl. If you look closely at the Indianapolis Brewing Company tray pictured below, left, you might even notice that one of the beer-drinking men bears a striking resemblance to Democrat gubernatorial candidate John Gregg. 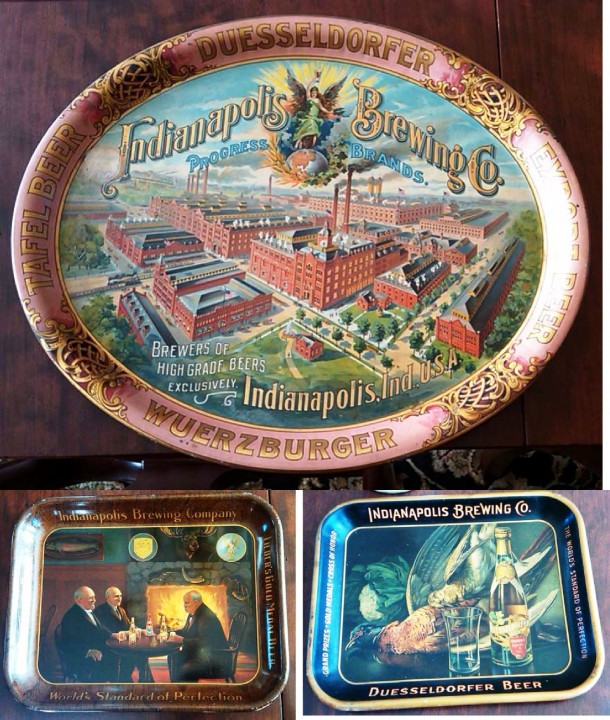 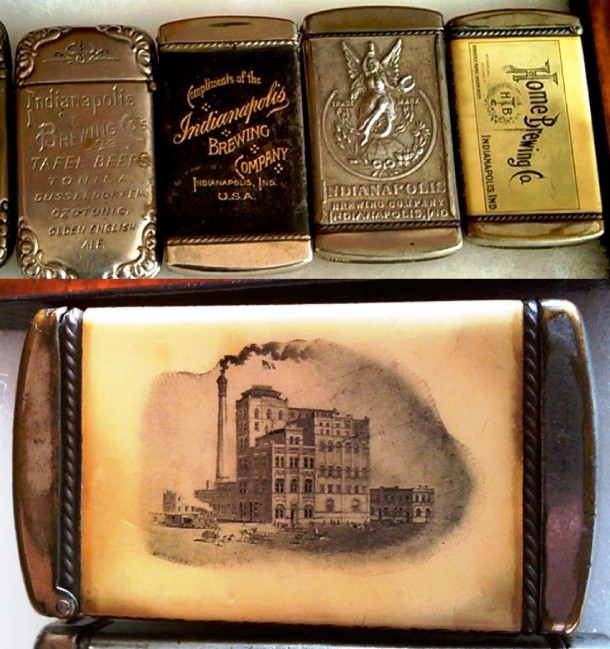 Given the brewing industry’s fondness for flammable match safes and photos of babies with beer, it should be no surprise that they needed good lawyers. Here’s an Indianapolis Brewing Company envelope from 1895 addressed to my law firm, Baker & Daniels. 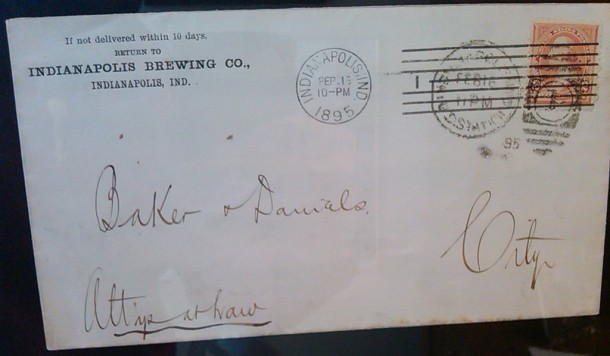 Although the first brewery was opened in Indianapolis in 1834, early Indianapolis breweriana is scarce. The dark, bitter liquid that passed for beer in the 1830s failed to please the pioneer palate, and the brewery that William Wernwag and John L. Young built on West Maryland Street was shut down by 1840. A few small breweries sprung up over the next decade, but by 1855 the temperance movement was powerful enough to secure passage of state legislation prohibiting the manufacture or sale of beer, wine and liquors except for medical, scientific and sacramental purposes. This short-lived era of prohibition started in June 1855 and ended in November, when the law was struck down by the state Supreme Court. Four years later, brewer C.F. Schmidt introduced Indianapolis residents to lager beer, and the success of his brewery launched a beer boom in Indianapolis that lasted for the next 50 years.

The golden age of brewing dawned in Indianapolis in 1889, when the Schmidt and Lieber breweries combined with Caspar Maus’ brewery to form the Indianapolis Brewing Company. The company’s Duesseldorfer beer won gold medals at the Paris Exposition in 1900 and the grand prize at the St. Louis World’s Fair in 1904. The same beer also took top honors at subsequent expositions held in Belgium in 1905 and in Italy in 1906. 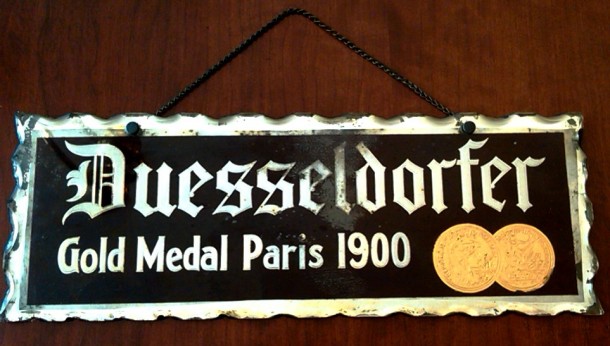 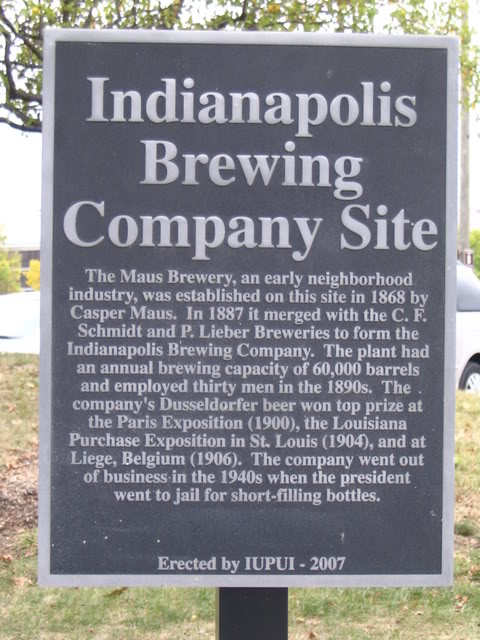