On the surface, George J. Marott would seem to have nothing in common with Ray Kinsella, the fictional farmer in Field of Dreams who built a baseball diamond in the middle of his cornfield.  First of all, Marott was a real person – a self-made man whose successful business ventures have left a lasting mark on Indianapolis.  And secondly, there is absolutely no evidence that Marott ever heard a disembodied voice tell him “If you build it, they will come.” But around the turn of the last century,  Marott had a vision that some believed came out of left field when he looked down sleepy Massachusetts Avenue and imagined a new retail district that would someday be packed with people bustling between shops and eateries.

So in 1906, George Marott turned heads in Indianapolis when he tore down an old hotel on Massachusetts Avenue  and built a magnificent five-story building that would be suitable for a department store.  Then he waited for the business to come. 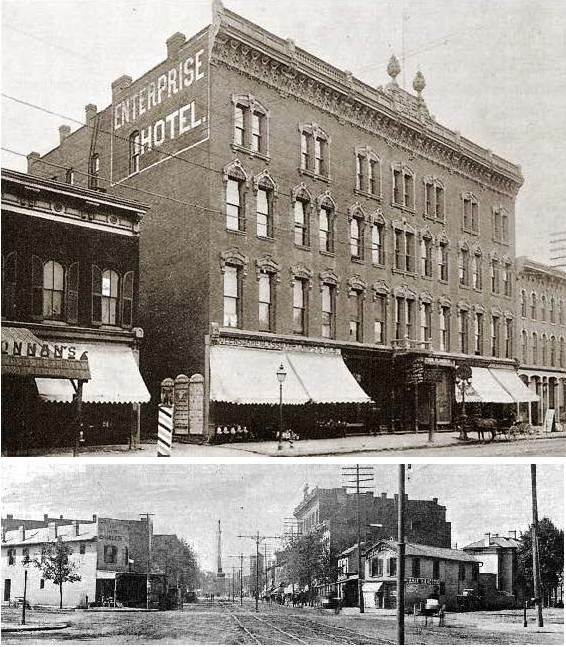 Marott demolished the Enterprise Hotel to make way for his department store. Built in the 1870s by Shover and Christian, the hotel can be seen in the old view of Mass Ave shown above.

As the Commercial Club later observed in its monthly magazine, “Forward”:

It was evident that Mr. Marott’s faith was not immediately shared by any business large enough to occupy the entire building. But having baited his hook, Mr. Marott waited – waited patiently. He waited one year. He waited two years.

But still no businesses came to the building that was now being referred to as Marott’s “elephant.”

During this period of waiting, Marott was hardly sitting on his hands.  When he gambled on Massachusetts Avenue, he already was one of the city’s wealthiest businessmen, with a successful shoe store on Washington Street and large holdings in interurban companies, utilities, and commercial real estate. So he put his considerable business acumen to work in marketing Mass Ave to the masses.

The headline from the two-page ad that ran in the Star in 1906. The top photo shows the west side of the 400 block of Mass Ave. The east side of the same block is shown on the bottom photo.

In 1906, Marott joined with other Mass Ave merchants to purchase a two-page ad in The Indianapolis Star that touted the avenue for its low prices and its prime location as the only outlet that led to the growing northeast section of the city.  According to the ad, Mass Ave already taken on “metropolitan air” that would astonish former residents, “throb[bing] every hour of the day with a mass of humanity that foretells its future greatness.”

Although both Stout’s Shoe Factory and Conrad’s Cloak House were already thriving when Marott set his sights on Mass Avenue, his vision of partnering with a large department store failed to materialize. So after two years of waiting, Marott decided to occupy the building himself.  The Marott Department Store opened to much fanfare on October 1, 1908. 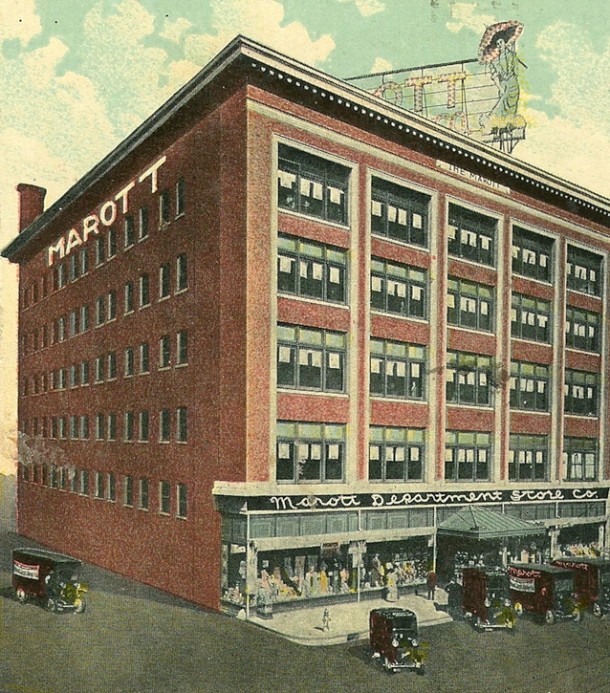 An estimated 65,000 people thronged through the doors of the Marott Department Store on opening day. The enterprise was immediately deemed a great success, even though – as noted by The Indianapolis News — the large crowds actually made shopping “a matter of extreme difficulty.”

The following year, Marott joined with 10 other Mass Ave merchants to establish the Massachusetts Avenue Merchants Association.  The group immediately went to work, successfully lobbying for the installation of street lights and persuading the Hagenback-Wallace circus to add the avenue to its parade route. An effort was also launched to persuade the city to move the Fire Department’s headquarters from Mass Ave so the space could be freed for a projected $1 million in new retail development.

In November 1910, the Commercial Club of Indianapolis featured the miracle of Mass Ave on the front page of its monthly magazine, noting that the once-rural outpost had finally “caught on.” 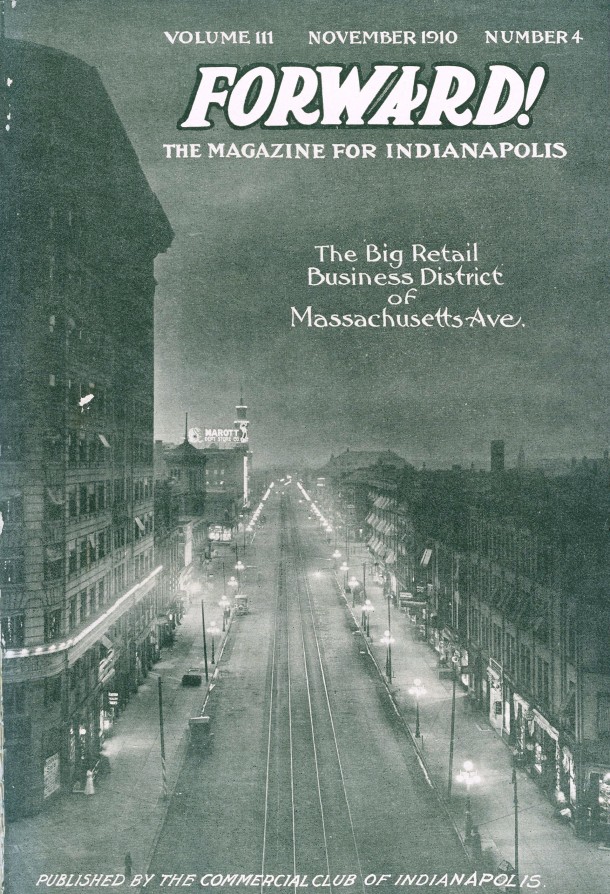 But Marott soon discovered that low prices and a beautiful, well-stocked store were not sufficient to bring the masses to the avenue.  Getting there, it seemed, was a bit of a hurdle for many potential shoppers.  In 1911, Marott purchased three Buick buses to ferry shoppers from the central business district to the Marott Department Store.  Shoppers who arrived via interurban were also given a voucher to cover the cost of their travel.

Photo from The Commercial Vehicle, June 1912.

In 1914, Marott sold the store to a retail cooperative established by five local labor unions.  Two years later, the union’s effort was busted and bankrupt.

Marott cited lack of parking as one of the reasons why the Mass Ave retail district was faltering.  In 1918, he urged the city to build four parking garages in each quadrant of downtown and to charge drivers for the privilege of parking on the street. “The present parking system is inconvenient and is not practicable for any purpose,” Marott told The Indianapolis Star on September 1, 1918.  Downtown-area merchants were losing business from farmers who were fearful of trying to park on the overcrowded streets, Marott said, noting that his own car had been repeatedly rear-ended while parked on a city street. 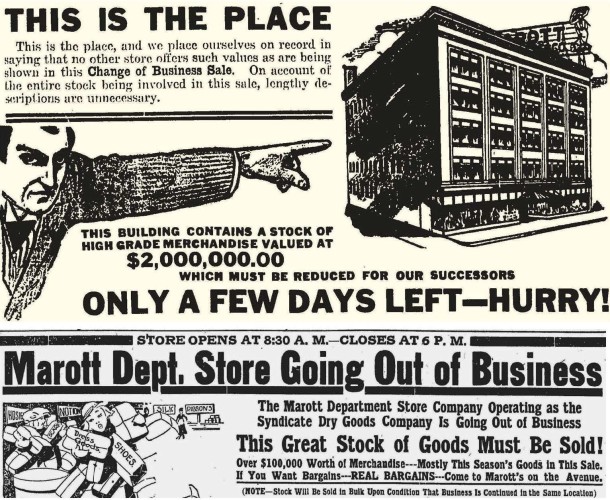 The advertisement on the top is from the January 11, 1914 Indianapolis Star, when George Marott turned his business over to the union-owned Syndicate Dry Goods Company. A scant two years later, Syndicate ran an ad for its own going-out-of-business sale on February 6, 1916.

In 1924, Marott threw in the towel on retail and decided to convert the vacant department store building into office space with a marble lobby and elevator service.  Marott told The Indianapolis News on September 30, 1924 that he now believed Mass Ave would boom as a business district.  At the time, he was confident that the opening of the new Delaware Street bridge spanning Fall Creek would turn Delaware into one of the city’s busiest throughfares and foster northern expansion of the downtown business district.

Once again, Marott waited for business to come.  And waited.  The building sat vacant until 1935, when it was finally leased by the U.S. Resettlement Administration, a New Deal agency that relocated struggling urban and rural families to communities planned by the federal government.

In 1953, the now defunct L. Strauss & Co. store commissioned architect Edward Pierre to design a vision of Indianapolis 25 years in the future.  Much like Marott’s proposal in 1918, Pierre’s Crossroads plan called for the construction of four parking garages to solve the parking problem, one in each quadrant of downtown.  But the two men’s visions diverged when it came to Mass Ave.

In 1975, however, the Indiana Architectural Foundation painted a much different picture of Mass Ave in its book, “Indianapolis Architecture”:

Its steady decline since the 1930s was hastened by the construction of the Indiana National Bank Tower that closed forever the southern portion opening into Ohio.  The street manages to stay alive, just barely, but it has all the characteristics of a “Skid Row”: boarded store fronts, vacant lots and raucous bars. 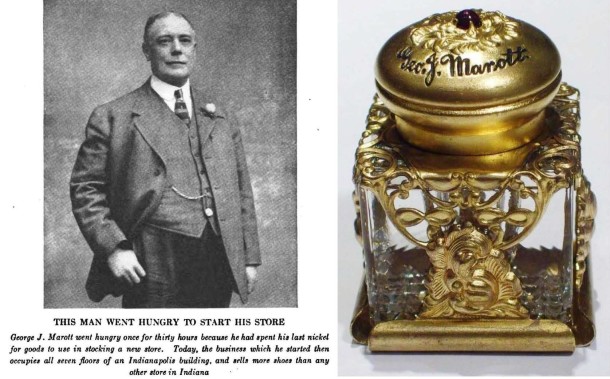 George J. Marott was one of two successful businessmen profiled in April 1917 by “System: The Magazine of Business.” On the right is an inkwell bearing Marott’s name that sold last year on ebay for $49.

The failure of George J. Marott’s vision for Mass Ave did not deter the scrappy and savvy businessman from continuing to invest in Indianapolis. In 1922, Marott announced plans to build a 10-story family hotel on the northeast corner of Meridian Street and Fall Creek Boulevard.  Marott told The Indianapolis Star on August 16, 1922 that he had been holding onto the land for more than three decades waiting for the city’s northward expansion. The proposed hotel’s mid-town location made it an ideal spot for conventions and meetings.

“Since women have entered into business and politics actively there is a demand for a convention hall large enough to accommodate large gatherings of women which is removed from the business section of the city,” Marott told the Star.

Marott’s shoe store also continued to thrive, growing into the second largest shoe store in the nation. In January 1946, George J. Marott transferred half of the stock in the store to 52 of his long-time employees, and the remainder to Butler University to fund a scholarship. He died one month later in his apartment at the Marott Hotel. 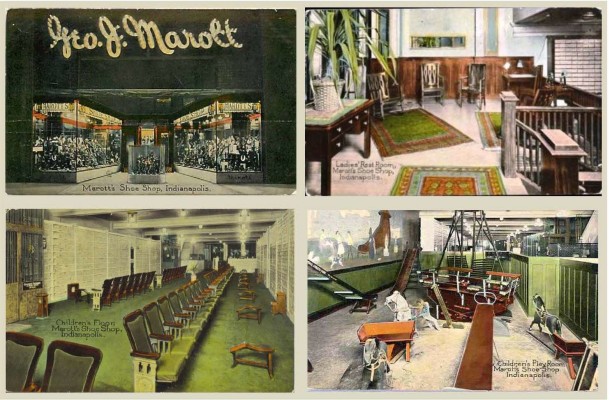