When Thomas and Samuel Kingan boarded a boat in Belfast in 1848, they had no intention of landing on the banks of the White River. Instead, they were bound for New York City, where they would join millions of other Irish immigrants who had come to America because of the potato famine.

The owners of a prosperous meatpacking plant in northern Ireland, the Kingan brothers were expanding their operations to the United States in an effort to increase production and fill the gaps in the British market left by the potato famine. By 1851, they had opened a plant in Brooklyn which exported processed meat to England and Ireland. Two years later, they opened another plant in Cincinnati. But sadly, the luck of the Irish was not with the brothers. By the end of the decade, both of their U.S. plants had burned to the ground.

Undaunted, the Kingan brothers picked up stakes again and moved to Indianapolis, which was rapidly growing as a railroad hub. They built a five-story plant on the west side of the White River which opened to great success in 1863. Unfortunately, the third time was not a charm for the Irish pair, either. The Kingan brothers’ new Indianapolis facility – the largest porkhouse in the world — was destroyed by arson the following May, along with an immense amount of lard and hams. The intense heat from the burning pork products made it almost impossible for firefighters to extinguish the flames. At the time, the $240,000 loss was the largest ever incurred in the city. 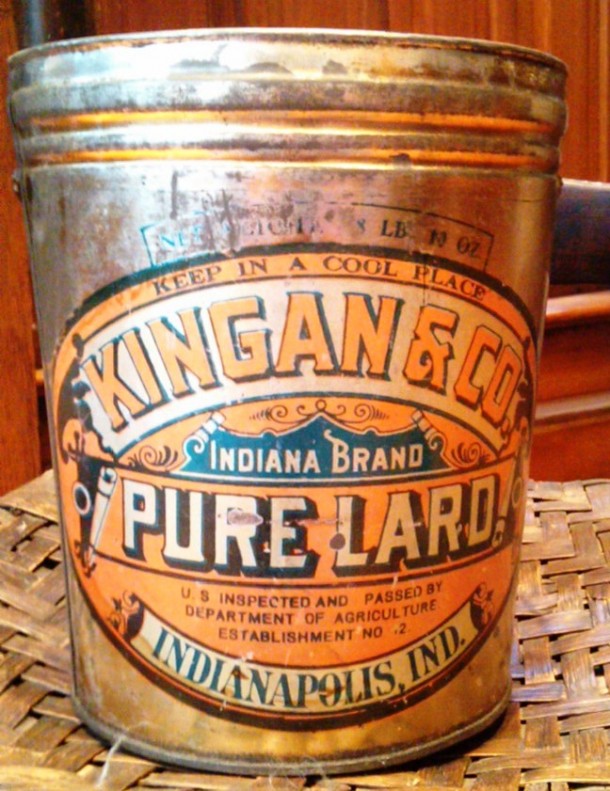 If the Kingans had learned anything during their short time in America, however, it was the value of a good fire insurance policy. They were able to rebuild almost immediately and reopen in time for the next packing season.

The business grew quickly, profiting both from sales to the Union Army and shipments back to England. In 1873, the Kingan brothers bought a competing pork-house on the other side of the railroad tracks and connected it to their plant with a tunnel. Two years later, they merged with the Belfast firm of J&T Sinclair to form Kingan & Company. By the end of the 19th century, the Kingans’ Indianapolis plant spanned 27 acres along both sides of the White River just south of Washington Street.

Pictured above is a celluloid blotter cover from Christmas 1905. The illustration shows the immense size of the 27-acre plant, which spanned both sides of the White River.

Kingan & Company was one of the largest meat-packing companies in the world, a position it would hold for nearly a century. The Kingans needed a steady supply of labor as the business grew, and saw an opportunity for their fellow Irishmen. The brothers not only employed a large number of Irish laborers who already lived in town, they also placed advertisements in Belfast newspapers to encourage Irish workers to come to Indianapolis and work at Kingan’s.

The company built an apartment house on the westside for its Irish immigrant workers in the early 1870s. Many of the other Irish workers lived in an area adjacent to Fountain Square known as Irish Hills. While the exact boundaries of this neighborhood have been disputed, the Irish Hills area roughly encompassed the area between College on the west, Shelby on the east, with the north and south boundaries being the first two rail lines south of Washington Street. 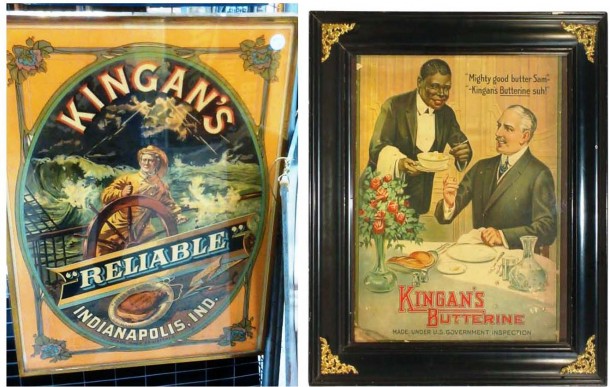 I spotted the poster on the left at last fall's Indianapolis Antique Advertising Show. The spring show is going on today and tomorrow at the State Fairgrounds. The "Butterine" poster on the right is currently for sale on ebay. Both the racial stereotyping and the thought of "Butterine" leave a bad taste in my mouth.

At the same time the Kingans were importing Irish workers for their U.S. plants, they were busy exporting packed pork and beef for the English market. To highlight both its booming export trade and the high quality of its products, the company adopted as its logo a picture of a grizzled mariner with the word “Reliable” prominently featured.

In today’s uncertain times, consumers value reliability in their banks, in their cars, and in their deodorants. But when was the last time you worried about whether your ham was reliable? In fact, I’m not even sure what it means to call a ham “reliable.” But apparently this catch-phrase resonated with early 20th century consumers because it was used consistently on Kingan’s advertising throughout the company’s most prosperous years.

Like many other food companies, Kingan's gave away promotional items to women to encourage them to buy their products. In retrospect, however, it's doubtful that many women were persuaded to buy more lard after looking in the Kingan's mirror and using the Kingan's tape measure pictured above.

When the Kingans opened their plant in Indianapolis, pork packing was limited to winter because the meat spoiled too quickly in the warmer months. In 1868, however, a Kingan employee named George Stockman invented a process for ice curing pork in the summer which enabled Kingan’s to operate year-round. This invention revolutionized the pork industry. In his 1910 history of greater Indianapolis, historian Jacob P. Dunn explains the significance of Stockman’s invention:

Men often speak of the far-reaching effects of the Gatling gun, which was also invented in Indianapolis, but here was something even more important. Before it, pork could be packed only in the freezing weather. The season usually lasted only two or three months and was broken up by warmer weather. A warm winter was a public calamity.

Dunn went on to say that “[i]f Indianapolis wants to put up a monument for a citizen who did more for all the world than all her professional men and statesmen put together, she has the subject in George W. Stockman.” More than 100 years have passed since Dunn wrote these words, but to my knowledge, the city has yet to erect a monument to Stockman. The long-time Kingan’s employee is buried at Crown Hill cemetery.

Ice-curing was not the only innovation to come out of Kingan’s Indianapolis plant. In the 1920s, Kingan’s became the first meatpacker to sell sliced bacon, which in my view IS the greatest thing since sliced bread (another manufacturing marvel that has its origins in Indianapolis). 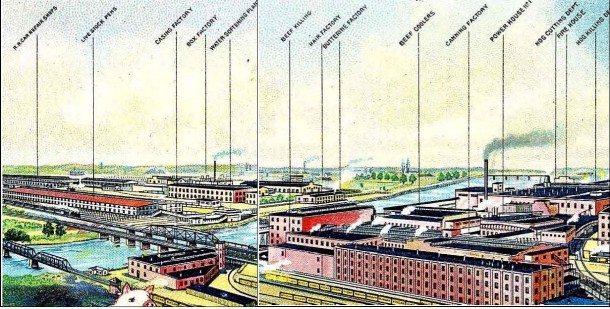 These close-up views of the 1905 blotter make it easier to see the labels for the various Kingan buildings, which included livestock pens, a railroad car repair shop, a box factory, a canning factory and a fire house. Interestingly, both the hair factory and the Butterine factory were housed in the same building.

Thomas Kingan died in 1906, and W.R. Sinclair came to the U.S. from the company’s Belfast plant to help run the Indianapolis operation. Five years later, Thomas Sinclair took over the reins of the company when Samuel Kingan died. The Sinclair family would run the business for the next 40 years.

Detroit-based Hygrade Corp. bought Kingan in 1952 and kept it open for another 14 years. In the face of increasing competition, the complex was shuttered in 1966. Then on July 17, 1967, the Kingan brothers’ Indianapolis empire ended the same way it started, with a blazing fire. 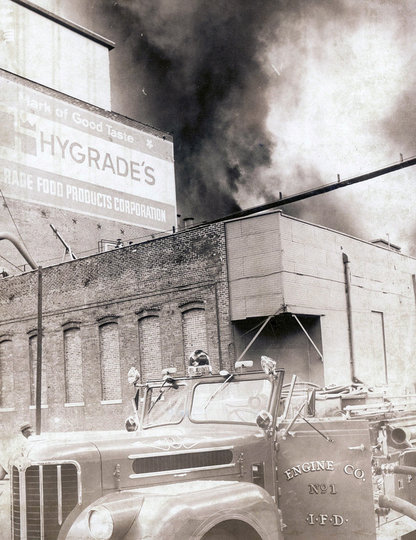 The Kingan brothers would not recognize the site of their once-booming Indianapolis plant if they saw it today. The 1967 blaze that destroyed much of the complex opened the way for redevelopment. Today, the 27 acres along the White River where thousands of hogs were once slaughtered daily is now home to Victory Field and the Indianapolis Zoo.