I was born in the early morning hours of my parents’ sixth wedding anniversary. As Dad would tell the story, my mom wanted an anniversary baby, and figured she could make that happen by refusing to leave the house despite some obvious signs of my imminent arrival. He finally persuaded her to go to the hospital as midnight approached, and anxiously lit a cigarette as she was whisked away on a gurney. Within a few minutes, however, he wasn’t the only thing smoking in the waiting room. In his agitated state he had dropped a burning match into a wastebasket. By the time the fire was extinguished, I had been born.

Back in the day, smoking was allowed in hospitals. In fact, it was even encouraged by hospitals that doled out free matchbooks to expectant fathers pacing the halls and to proud new dads handing out cigars. Even though hospital staff may not have realized it at the time, matchbooks were a great advertising medium, because sooner or later almost every visitor who smoked would someday return as a patient.

From the 1930s through the 1960s, matchbook marketing was pervasive. If your business had a product or a service to sell, you sold it with matchbooks. If you ran a swanky nightclub, a family-style cafeteria, or a go-go dancer joint, your customers got matchbooks. Banks gave matchbooks to their customers, candidates gave matchbooks to voters, and no wedding reception was complete unless the guests left with a happy smile on their faces and a personalized matchbook in their pockets. These were the days when you could smoke in an airplane, smoke in an elevator and probably even smoke in a delivery room, and savvy marketers knew that where there’s smokers, there are matchbooks.

Even before advent of the modern matchbook, match containers were a popular way for companies to advertise their products. Ornate silver match safes bearing the names of Indianapolis’ early breweries and a lithographed tin match holder advertising the Indianapolis Sunday Star have been featured in previous Indianapolis Collected articles. But match safes and match holders quickly became obsolete when the paper matchbook arrived.

The paper matchbook was invented in 1892 by attorney Joshua Pusey, who came up with the idea of dipping paper sticks into a solution of sulphur and phosphorous and stapling them onto cardboard. The Diamond Match Company purchased the patent, but sales were slow after consumers discovered that lighting one of the new paper matches was as dangerous as playing with fire.

In the original design, the friction strip was placed inside the cover, right next to the flammable tips of the match. You can probably guess how that turned out. In an effort to ease consumers’ fears, Diamond Match moved the friction strip to the back. A simple disclaimer was added: “Close Cover Before Striking.” 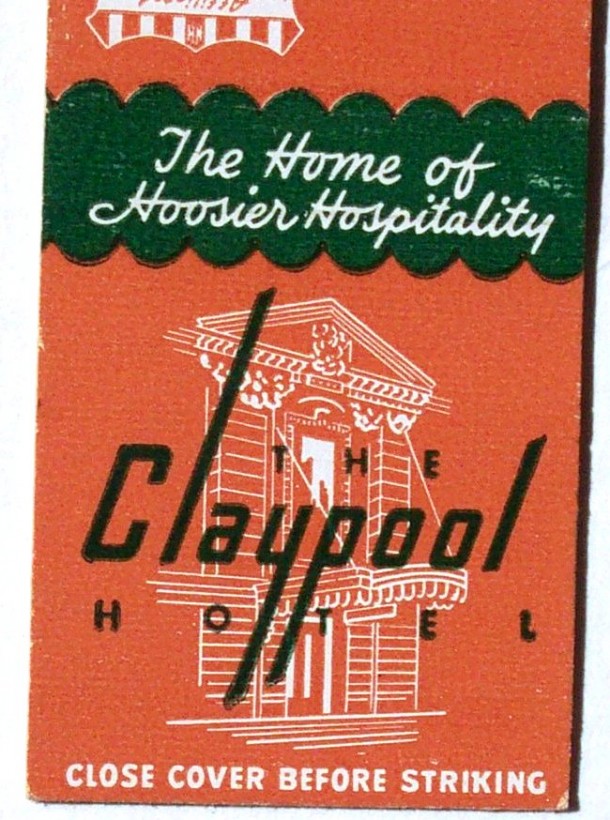 If you see the words “Close Cover Before Striking,” it’s a safe bet that the matchbook is at least 50 years old. In the early 1960s, the federal government required matchbook manufacturers to move the friction strip to the back of the matchbook, obviating the need for the disclaimer while taking away just a little bit of the fun. After the government clamped down on matchbooks, teens who saught to defy parental authority by smoking could no longer light a match and defy The Man by striking BEFORE closing.

The aluminum diner still stands near the intersection of Emerson Avenue and 38th Street. It's currently used by a Noble Roman's and Subway franchise restaurant.

I have a particular fondness for matchbooks from restaurants and nightclubs. Many of these colorful matchbooks have survived because people saved them as souvenirs. Tucked into scrapbooks, tossed into junk drawers or thrown into fishbowls, those little squares of cardboard were packed with memories of vacations, celebrations, and special nights on the town.

My parents did not spend a lot of time in glamorous nightclubs, what with raising four children and living in Kokomo. But once a year, Mom put on her pearls and they went out to Kokomo’s finest restaurant for the office Christmas party. The Casa Grande was long gone by the time I grew up, but in my mind I always imagined plush banquettes, sparkling cocktails and a beautiful singer with fruit on her head. Perhaps it was a little like LaRue’s, although people who actually went to the swanky Indianapolis supper club say that there was nothing quite like LaRue’s. 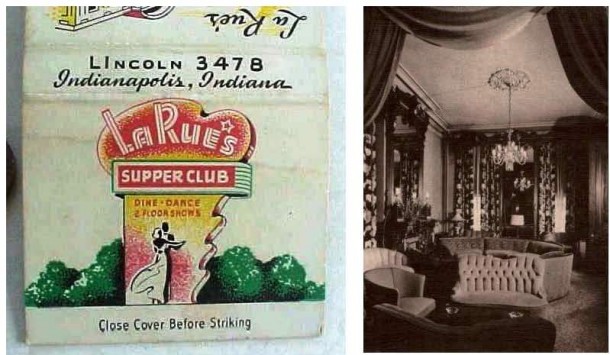 LaRue’s was located at 1121 N. Pennsylvania in a beautiful Italianate mansion built by banker Albert Fletcher. The photo on the right gives a hint of the glamour that awaited guests as they dined in the Blackamoor Room, had cocktails in the Gay Nineties Room, or watched one of nightly floorshows in the tropical splendor of the Penthouse. It was demolished in the 1960s to make way for the interstate.

Although many other beautiful homes still survive in the Old Northside and Herron-Morton historic districts, big Victorian mansions were converted or razed as early as the 1920s to make way for commerce. The four matchbooks pictured below are from near-downtown establishments that flourished at least long enough for the owner to have matchbooks printed. If you lived in the area in the late 1950s or early 1960s, you could have enjoyed giant cocktails at Al Meyers on Pennsylvania, bought pastries at Brooks Bakery on Central, or followed the crowd to Paul Schaller’s College Tavern. Three of the matchbooks bear the old exchange number system. I’m not sure what “MA” and “WA” stand for, but “ME” is Melrose, and was used for phone numbers beginning with 63. 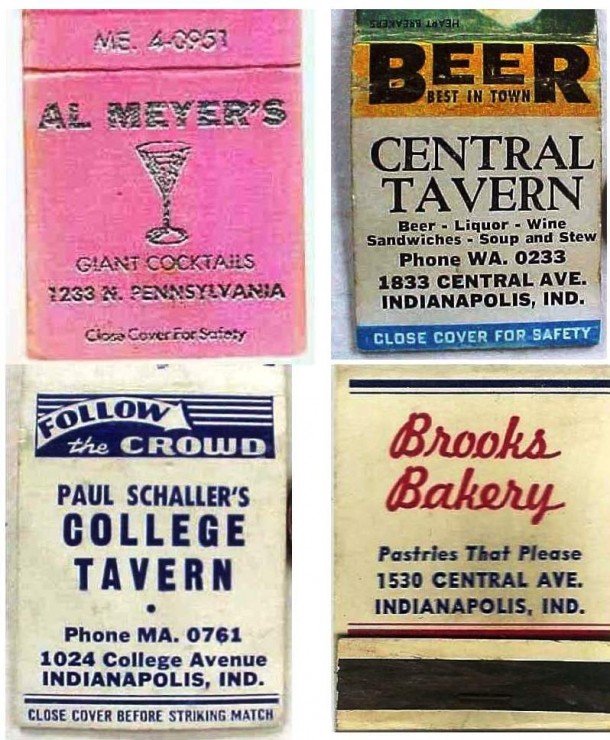 As I browsed through the matchbooks for sale on eBay, there were a few familiar names, but the vast majority of matchbooks came from places that I’d never even heard of before – the Hawthorn at 16th and Central, the Danube at 203 West Washington, and Sugar-n-Spice at New York and Meridian. According to the advertising on its matchbook, eating was wonderful at Sugar-n-Spice, but apparently not so wonderful as to save the place from demolition. The former site of Sugar –n-Spice is now home to the imposing 27-story granite tower that houses the law firm where I have spent many days eating a not-so-wonderful lunch at my desk. 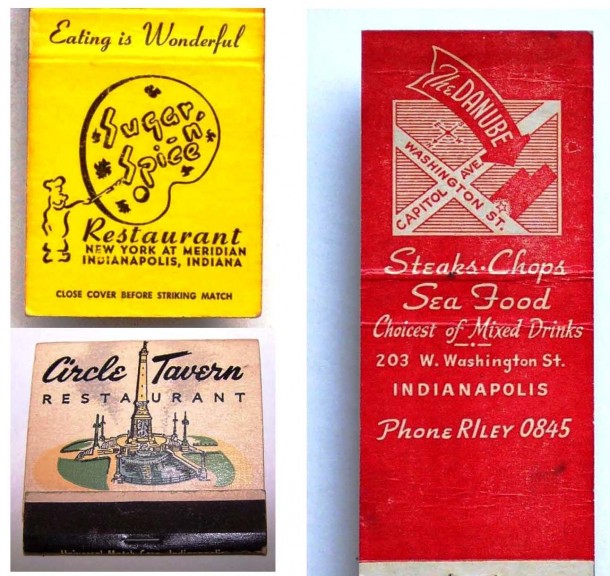 Matchbooks are generally not collected for the matches that lie between the covers. Instead, a matchbook collector will carefully pry out the staple at the bottom of the book and discard the matches. However, there are some types of matchbooks, known as features, where the matches themselves are a form of advertising. The matchbook on the left, below, is from Fendrick’s, a downtown restaurant with locations at Union Station and the traction terminal. 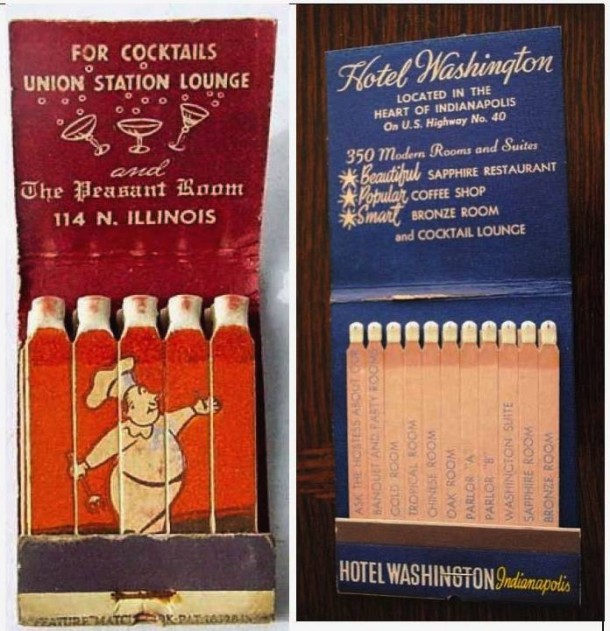 Matchbook collectors also look for specific categories, such as hotels, motels, banks or bars. Restaurant matches are highly collectible and can be broken down into even smaller categories – steaks, seafood, Chinese or Italian. Matchbooks are great collectibles because they’re inexpensive and easy to find. And a collector can literally store hundreds of matchbooks in a space no bigger than a breadbox.

Not surprisingly, “girlie” matchbooks are one of the hottest areas of matchbook collecting (at least among male collectors). I don’t know whether the young woman pictured on the matchbook below is actually Yvonne, nor do I understand why she is sitting in a cage in what appears to be her underwear. I am pretty sure, however, that a wife would not be happy to find a matchbook from Yvonne’s as she was doing her husband’s laundry. Especially if it had a phone number scrawled on the cover. 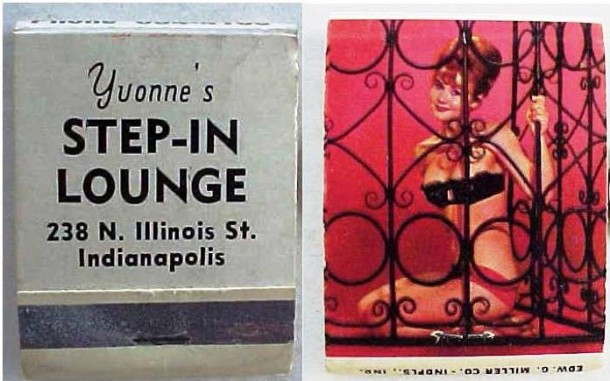 In the days before Blackberries and iPhones, matchbooks were a convenient way to jot down phone numbers or even record important events, such as a 1965 encounter between Harold of Harold’s Steer-In fame and the late Otto Frenzel III, former CEO of Merchants Bank. This matchbook was recently listed on eBay for $7. 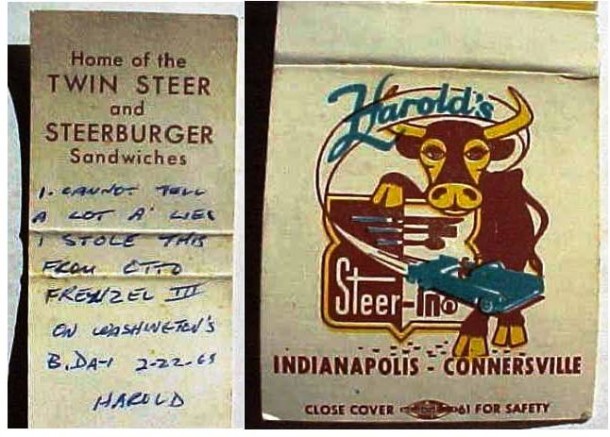 Matchbook collecting was hailed as the fastest-growing hobby in America in the late 1950s, second only to stamp collecting. Collector clubs flourished and held national conventions, where – not surprisingly – matchbooks were printed as souvenirs. Although the number of clubs has dwindled, the hobby still thrives. But the matchbook as a form of advertisement is becoming as obsolete as the test pattern on a TV.
The era of matchbook advertising in Indianapolis will officially come to an end on June 1, when most places in the city will finally go smoke-free. But the matchbooks will survive long after the smoke disappears. 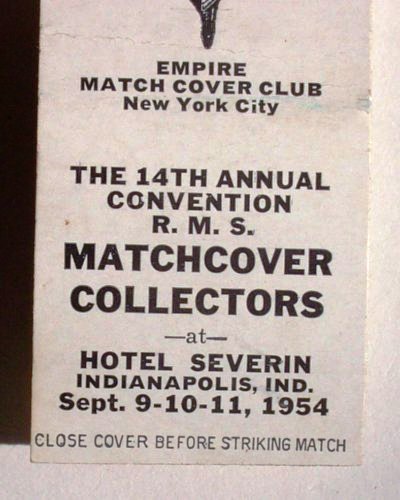