You’re probably familiar with the “Six Degrees of Separation” theory (or its drinking-game cousin, “Six Degrees of Kevin Bacon”). The basic premise is that everyone in the universe is no more than five people away from a personal connection with anyone else, including actor Kevin Bacon.

Despite rigorous scientific testing, researchers have failed to establish the validity of the “Six Degrees of Separation” theory. Nor have college students had much luck downing beers and trying to connect with Kevin Bacon. I suspect the problem is that the universe is just too large. If the universe was limited to Indianapolis, the theory might actually work. 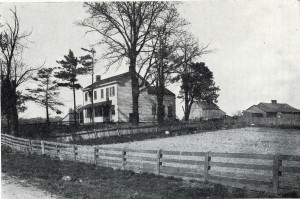 There was a time when pretty much everyone in town knew each other and also knew Hiram Bacon, a prominent dairy farmer and leader in the Presbyterian Church. Bacon was one of Washington Township’s first residents and a stationmaster on the Underground Railroad. He settled just north of Indianapolis in 1821, establishing his cheese dairy on nearly 400 acres of farmland near the current site of Glendale Mall. In the days before the Civil War, Bacon and his family provided shelter to fugitive slaves who were traveling to freedom, many of whom eluded capture by hiding in the nearby peat bog.   When darkness fell, Bacon conveyed the fugitives to the Quaker settlement of Westfield, which was the next station north.  Bacon’s farmhouse stood for many years on the east side of the road that eventually became Keystone Avenue. It was demolished in the early 1900s and is now site of the Donut Shop.

Since we moved into our old house nine years ago, I’ve spent hours researching not only every previous owner of our property, but also previous owners of adjacent properties.  I’ve tried to find letters, photos and other articles that are directly connected to the people that I am now connected to through my house. In researching my home’s history, I’ve discovered all kinds of connections with the city’s pioneer residents. So at first flush, it seems like I should be able to connect my house to Hiram Bacon in five or fewer degrees.

Robert Culbertson was the first owner of our property, and appears to be a likely candidate for a Bacon connection. Culbertson acquired 160 acres of property in Center Township in 1822 in two land grants signed by President James Monroe.  An up-and-coming citizen of the new state capital, Culbertson won the contract to build the Governor’s Mansion on the Circle.  By 1825, however, Culbertson had sold his land and moved to New Orleans to escape an embarrassing incident that occurred during an outing on the White River. 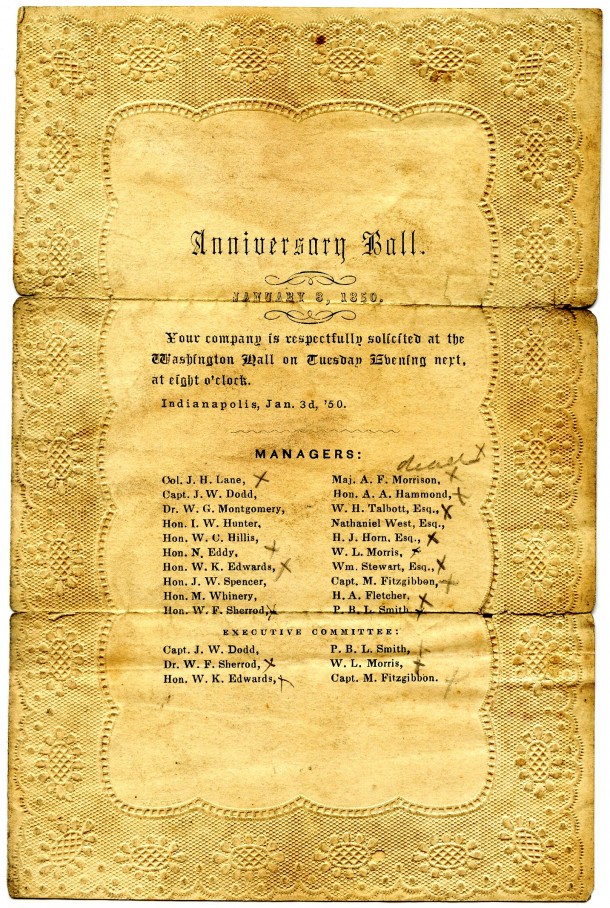 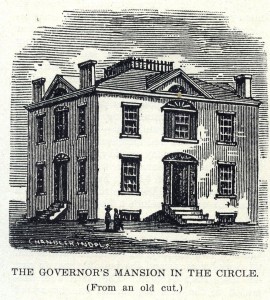 As told by historian John H.B. Nowland in his 1870 book Early Reminisces of Indianapolis, Culbertson was a bit of a dandy.  He wore a wig, and like many modern men who sport comb-overs, sincerely believed that that the ladies did not realize he was bald. However, during a pleasant cruise to Broad Ripple with two female companions, Culbertson fell into the water and lost his wig. Some 15 years later, Nowland saw Culbertson in New Orleans, who told the author that the wig incident and his impulsive flight from Indianapolis had caused his ruin.

Given Culbertson’s brief residency in Indianapolis, I’ve been unable to find a connection with Hiram Bacon.  A few years ago, however, I found a copy of an invitation to a ball that was sent to Nowland in 1850.  Notations were made beside the names of the ball’s managers, likely for inclusion in one of Nowland’s books on the city’s early history.

Culbertson’s property passed through four subsequent owners before it was sold to attorney Ovid Butler in 1846. Butler built a Greek Revival farmhouse, Forest Home, that still stands at the corner of Park and 13th Streets. One of the city’s first lawyers, Butler practiced law with Calvin Fletcher and Simon Yandes but retired in 1849 due to poor health. Retirement hardly slowed him down, however, because the same year that Butler retired he also established an abolitionist newspaper, The Free Soil Banner, and sought legislative approval for a new college that would admit both men and women on equal terms. 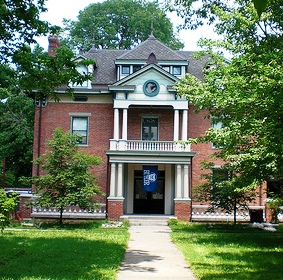 Forest Home. The original charter for Butler University was drafted in the parlor.

Although the Butler family is long gone from Forest Home, the Butler flag flies from the front porch of the house during basketball season.  I’ve also picked up a few things over the years that are tangible reminders of the man who founded the college I attended and who also platted the land where my house was built. See below: an 1871 catalogue for Northwestern Christian University (later renamed Butler College), and a letter written to Ovid Butler’s daughter, Cordelia, from her mother and her sister, Demia. In the letter, which was mailed shortly before the Butlers built Forest  Home, Elizabeth Butler chides Cordelia for staying away too long and hints at a big change in the domestic front that awaits Cordelia when she returns. There’s no way to confirm this, but I like to think that Elizabeth is talking about the family’s plans to move to the country (ie, 13th Street & Park) and build a new home. 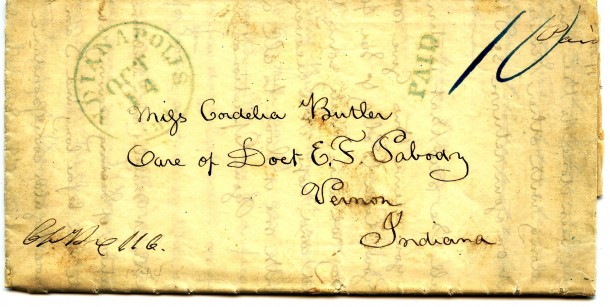 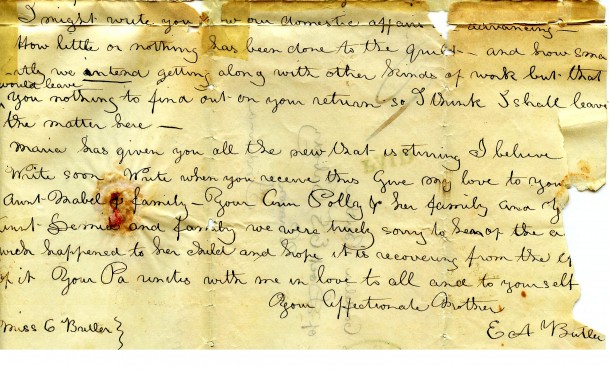 In 1868, Ovid Butler platted the portion of the Old Northside that lies between College and Central avenues. The new subdivision was named “Ovid Butler’s Addition to College Corners.”  Butler professor Catharine Merrill joined with two of her siblings to purchase six lots, including the lot where my house now stands.

I was hopeful that Catharine Merrill would somehow be connected to Hiram Bacon.  She arrived here in 1824 in the same wagon caravan that officially moved the State Capitol to Indianapolis.  Her father, state treasurer Samuel Merrill, was responsible for accompanying the state treasury, state library, state records, and the furniture from the old capitol on their 11-day journey from Corydon.

Some years later, her brother (Samuel Jr.) recounted a story told by his family about the historic move. 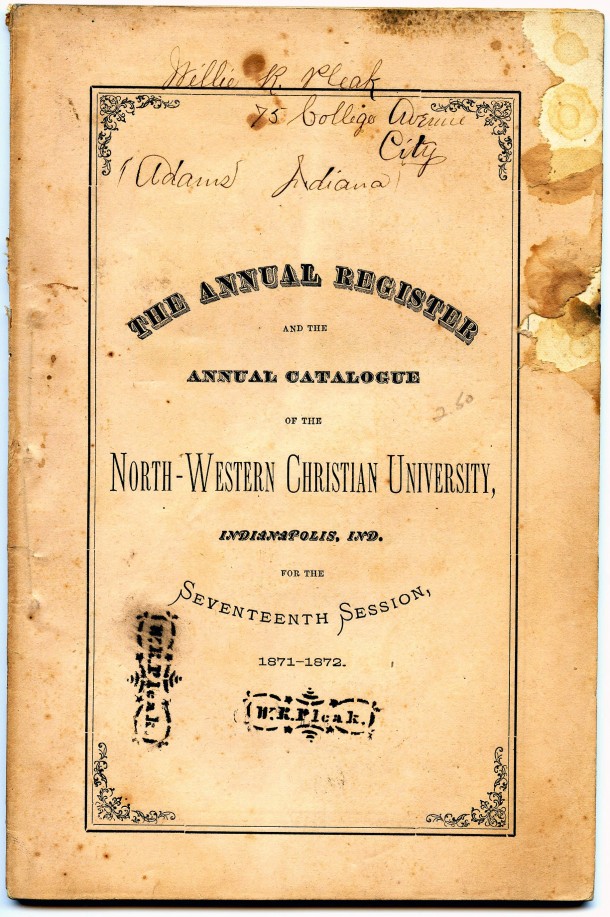 “….as they approached Indianapolis, coming along the road now called South Meridian St., the happy teamster, feeling that this was the proudest day of his life, refusing to listen to the pleadings of the ladies to the contrary, decked the horses with the loud sounding bells, & sent forward a country man, who chanced to be passing, to inform the people that the seat of government was coming. At the word, out poured most of the five hundred inhabitants –- boys, girls, men & women — to see a sight that will never again be seen in Indiana.” 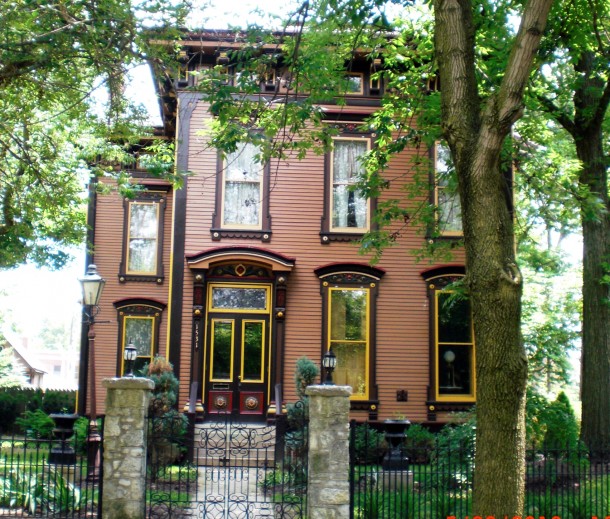 In 1869, Catharine Merrill became the second woman in the United States to be appointed a university professor when Ovid Butler established an endowed chair at Northwestern Christian in honor of his daughter, Demia, the first female to graduate from the school.  Catharine subsequently sold her interest in the Old Northside properties to her brother, Samuel Jr., who built a magnificent Italianate home on one of the lots (left). A few years later, Demia’s widower, George Townley, built a house across the street from Merrill’s (right). 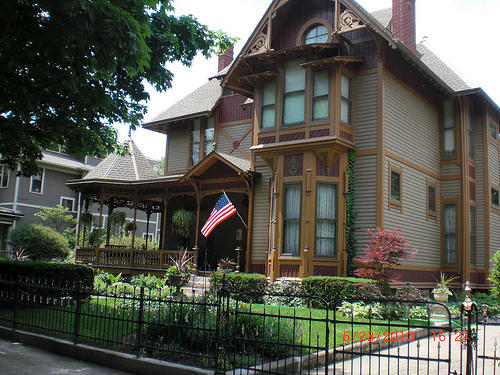 In 1934, members of the Catharine Merrill Club published a book on her life that included many of Merrill’s letters and journal writings from her childhood in the pioneer days of Indianapolis.  During those early years, Bacon helped establish the Presbyterian church where the Merrills worshiped and provided logs from his farm for the building.  While it is almost certain that Merrill knew Bacon from church, he is not mentioned in the book.

Much like a set of lost keys, the connection between my house and Hiram Bacon finally turned up right under my nose. From my desk, I can look out over my backyard fence and see the house that Calvin Fletcher, Jr., purchased in 1877 as a gift to his daughter, Sarah Hill Fletcher.  (below left) Sarah moved to the home in 1882 with her new husband, Dr. Theodore Wagner, and their infant son, Fletcher.  An expert in the treatment of smallpox, Wagner eventually contracted the disease himself and continued treating patients during his confinement in the pest house. A cardboard box for one of Wagner’s prescriptions is shown. (below) 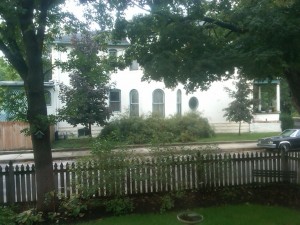 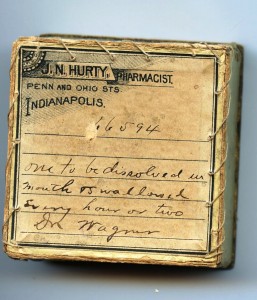 Fletcher grew into a brilliant young man. He attended Shortridge High School, serving as the first editor of Shortridge Daily Echo, and later graduated from Stanford University. He had hopes of joining his father in his medical practice, and was nominated for a Rhodes scholarship while pursuing graduate studies at Harvard. On the day that Fletcher received the news that he did not win the Rhodes scholarship, he disappeared from his room in Cambridge and was never seen nor heard from again. 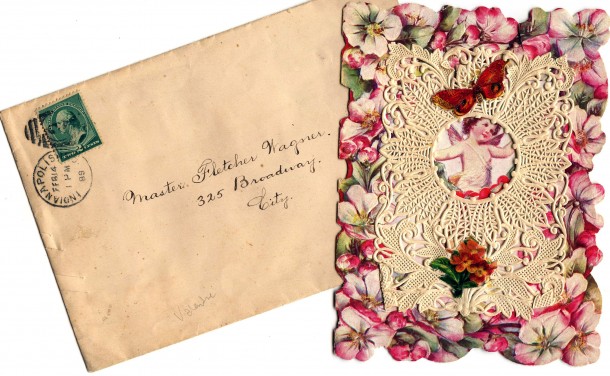 Valentine's Day card sent in 1888 to 7 year-old, Fletcher Wagner. Prior to the mid 1890's, Indianapolis had a different system of street addresses.

Fletcher Wagner was the great-grandson of Calvin Fletcher, who was the first lawyer to practice in Indianapolis. Calvin Fletcher was also an extensive diarist, leaving behind a series of journals that provide a comprehensive view of life in Indianapolis from 1821 to 1866. Fletcher’s diaries were published in a nine-volume set by the Indiana Historical Society, and in Volume 1, I found the following information.

While traveling on horseback in New York in 1824, Fletcher bought a new hat for $2.50. It started raining, so he stopped at a house for shelter.  The owner “inquired if I knew Hiram & W. Bacon near Indianapolis to which inquiry I was pleased to gratify them by an affirmative answer.”

So there’s the proof that brings home the Bacon.