On Febuary 5, 1828, a young man from Indianapolis dropped a letter in the mail to Peacham, Vermont. The cost of the postage was nearly half a day’s wages, but the writer was hoping his 25 cent investment would yield a big return. The content of the letter was short and to the point.

“Dear Brother,” the letter began. “I like the situation of the country about here as well as the inhabitants. This place is settled with the best society from different States and it does not take so many hard knocks, turns and twists, to acquire a livelihood and to be respected as it does in YankeeLand.. yet , it is no place for a person that has not a small capital to commence with…if you could possibly raise five hundred for me it would put me in a situation that I could realize considerable benefit from…” 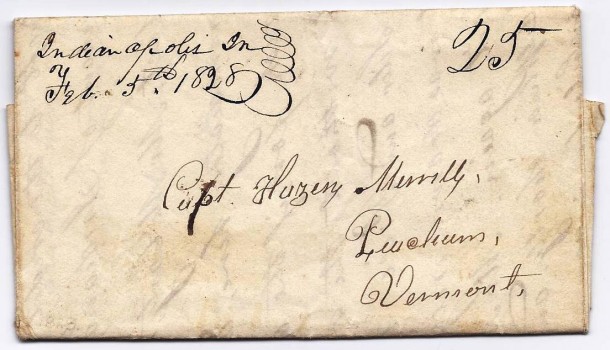 Although there’s nothing remarkable about one family member asking another for money, the letter grabbed my attention when I saw it listed on eBay this summer. Deeds and other legal documents from Indianapolis’ early days surface with some regularity on eBay, but a personal letter from a pioneer is pretty hard to find. Whenever I see a letter from Indianapolis with an 1820s date, I try to pin down the person who wrote it. The city was still in its infancy in those days, and given the settlement’s small population, there’s always a chance that the writer could be a familiar name from the history books.

The problem is, it can be a little tricky to figure out who wrote a 200-year-old letter unless the writer used his or her full name to sign the letter. While full names have always been the norm for business letters, personal correspondence between friends and family members is usually less formal. Further, people generally didn’t use return addresses in those days. In fact, most letters didn’t even have envelopes. Letters were simply folded into a rectangular shape for mailing, with the postage scribbled by hand in the corner. 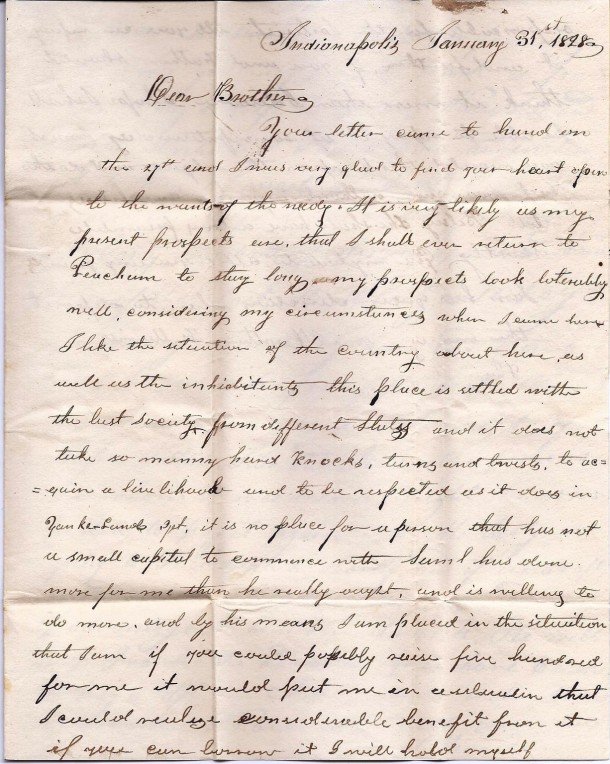 The task of figuring out who wrote the letter was made even more challenging by the fact that the eBay seller had not posted a photograph of the signature page. Granted, I could have emailed the seller and asked him to post a photograph. But that would be too easy. Plus, if the writer turned out to be who I thought it might be, his prominent role in our state’s history might drive up the auction price.

I have always been fascinated by the tale of State Treasurer Samuel Merrill moving the capitol from Corydon to Indianapolis in 1824. Based on the photo of the letter, it was obvious that the writer was a man living in Indianapolis in 1828 who had a brother named Merrill from Peacham, Vermont. Was it possible that the letter was written by Samuel Merrill? In order to find out, I turned to my favorite research tool (Google), and typed in “Merrill Peacham Vermont.” As expected, out popped a Wikipedia listing for Samuel Merrill.

A personal letter penned by Samuel Merrill in 1828 would be quite a find, at least in my view. Especially a letter asking for a loan. Until Merrill was named president of the newly created State Bank of Indiana in 1834, it was almost impossible for an individual living in Indianapolis to obtain a loan to start a new business. The state lacked any sort of banking system, and bartering was the primary commerce, with furs, sugar, crops and ginseng used as legal tender.

Under Merrill’s conservative management, the State Bank played a critical role in the development of Indiana during some of the most turbulent economic times in state history. When an ill-conceived plan to build canals and railroads ran out of the funds in the late 1830s, the State Bank rescued Indiana from bankruptcy. A few years later, during the National Panic of 1837, the State Bank was one of the few financial institutions in the country that did not default on its loans.

Because the State Bank which he later led did not even exist in 1828, it’s certainly understandable how an otherwise self-sufficient pioneer like Samuel Merrill might turn to his own brother for a loan. But something about the letter just didn’t seem right. In the first paragraph, for example, the writer tells his brother that his prospects look good in Indianapolis “considering my circumstances when I came here.” That simply made no sense, because it’s unlikely that anyone has ever arrived in Indianapolis under more auspicious circumstances than Samuel Merrill.

Although the General Assembly established Indianapolis as the state capital on January 6, 1821, the city was a capital in name only until Samuel Merrill came to town. As state treasurer, Merrill led the small wagon train carrying the state’s property and funds through the wilderness from Corydon to Indianapolis in November 1824. Merrill was accompanied by his wife, their three young children, and his wife’s siblings, William and Mary Catherine Anderson. The small party also included state printer John Douglass, his family, and their cow. The driver was a Mr. Seibert, a large man who supposedly had the strongest team of horses in Indiana.

Some 60 years later, Mary Catherine Anderson wrote down her recollections of the historic journey. Merrill’s son, Samuel Jr., also published a detailed account, although his version necessarily relied on the memories of others because he wasn’t born until seven years after his family arrived in Indianapolis. Taken together, both accounts paint a vivid picture of the arduous 11-day journey from Corydon to Indianapolis.

The party departed for Indianapolis on a fine and sunny morning, and traveled nearly 11 miles on their first day. The women and children were fortunate to find shelter that evening in a one-room frame house, which was grand in comparison to the log dwellings where they slept for the remainder of the journey. The men passed the nights in the wagons, guarding the state treasury, which consisted of a single strong box containing nearly $25,000 in funds.

As later recounted by Samuel Merrill, Jr., the party made quite an impression when it finally arrived in Indianapolis:

“Whenever the caravan came to a small hamlet like Columbus or Franklin, Mr. Seibert who was very proud of his team, would put immense sleigh bells in arches over the horses shoulders to give everybody to understand that something important was coming…[A]as they approached Indianapolis, coming along the road now called South Meridian St. the happy teamster, feeling that this was the proudest day of his life, refusing to listen to the pleadings of the ladies to the contrary, decked the horses with the loud sounding bells, & sent forward a country man, who chanced to be passing, to inform the people that the seat of government was coming. At the word, out poured most of the five hundred inhabitants boys, girls, men & women to see a sight that will never again be seen in Indiana. When the teams stopped at Blake & Hendersons tavern . . . every citizen went home rubbing his hands & saying the fortune of Indianapolis is made.”

This scene from an 1870s painting by Thomas Glessing supposedly depicts the arrival of Merrill's party in Indianapolis.

Merrill remained in Indianapolis until his death in 1855, playing an instrumental role in the transition of Indianapolis from a backwoods settlement to a thriving state capital. After he finished his service as president of the Indiana State Bank, he was named president of the Madison & Indianapolis Railroad. At the time, construction on the tracks had virtually stalled near Vernon. Merrill led the railroad through a period of rapid expansion that culminated in 1847, when the track finally reached Indianapolis and connected the capital city to the rest of the world. In 1850, he purchased a bookstore and started the Merrill Publishing Company, which later evolved into Bobbs-Merrill Company.

Historian Jacob Piat Dunn even credits Merrill with coining the name “Indianapolis” after other prospective names for the new city had been soundly defeated in the General Assembly. Although most accounts give Jeremiah Sullivan credit for naming the city, there’s no dispute that as a state lawmaker in Corydon, Merrill seconded Sullivan’s motion and helped persuade his fellow lawmakers that Indianapolis was the best name for the new capital.

I am reminded of Samuel Merrill every day. My house sits on property that was owned by three of his children, two of whom were on the historic journey from Corydon to Indianapolis. From my yard I can see the magnificent Italianate house built in the 1870s by his son, Samuel Jr. So I really wanted to acquire the letter when I saw it on eBay, and was disappointed when it sold to another bidder for $140. 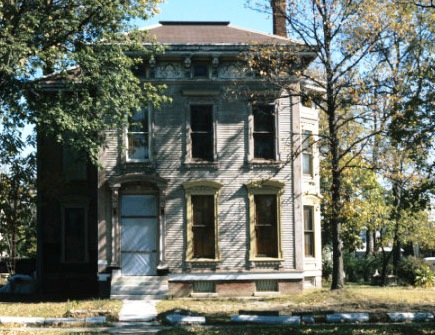 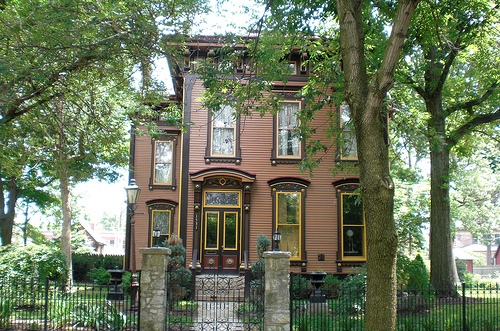 My spirits lifted a few days later, however, when I discovered incontrovertible proof that the letter could not have been written by Samuel Merrill because – upon closer inspection – the letter actually mentions Samuel Merrill. Right before he asks his brother for money, the writer scribbles that “Saml has done more for me than he really ought, and is willing to do more.”

It’s unknown whether the author of the letter ever got the loan from his brother in Vermont. However, a few years later, Samuel’s brother Franklin Merrill made an investment in a small store in Indianapolis. By the early 1840s, either the store or another business venture had gone belly up, leaving the recently widowed Frank and his young children without a roof over their heads. They were forced to move in with Samuel Merrill and his family, who were also struggling financially. Always willing to do more, Samuel had put up the money so Frank could start his ill-fated business. 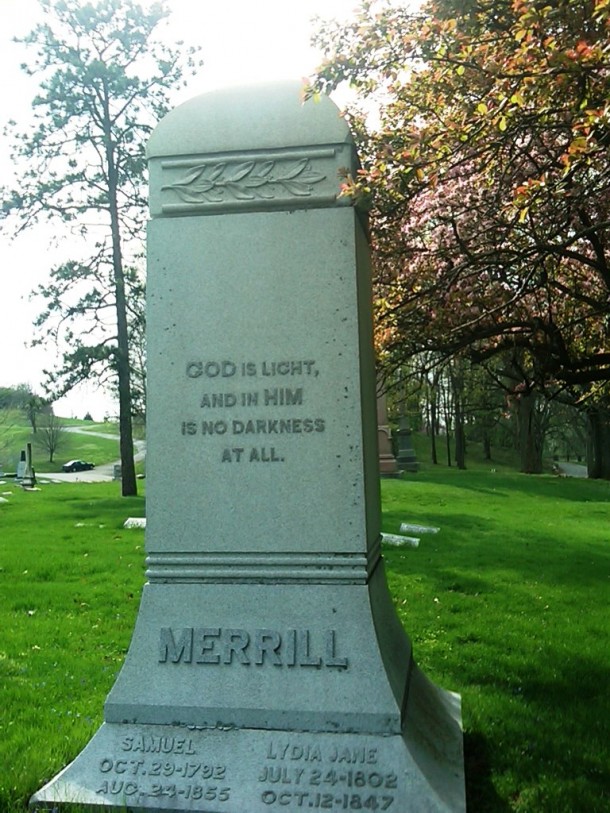