Except for a brief 30-year window when religion and rectitude ruled the day, the traditional 4th of July celebration in Indianapolis has remained largely unchanged since 1822. Meat is barbecued, fireworks are exploded and alcoholic beverages are consumed. It’s a simple formula for celebrating our nation’s independence that has kept Indianapolis residents entertained for the past 190 years.

Because most of the settlers were stricken with ague (a malaria-like illness) during the summer of 1821, the city’s first real 4th of July celebration was held in 1822. All of the townspeople were invited. A freshly killed buck was barbecued in the middle of Washington Street, and the settlers dined in a shady grove near Military Park.

Throughout the day, there was “a great stir and liveliness among the people,” as Calvin Fletcher’s wife, Sarah, later recorded in her diary. And no wonder. After the speeches and orations, a teamster from Dayton, Ohio donned a clown costume and performed comic songs for the crowd. The party later migrated to an unfinished house on Market Street for a night of dancing.

According to W.R. Holloway’s 1870 history of the city, July 4, 1822 was the first time that a clown performed in public in Indianapolis, although Holloway noted that “we have had them by the hundreds since in our legislative halls, courts of justice, and political conventions.”

The day was filled with merriment, but the most memorable moment came when Calvin Fletcher stood to offer the following toast to the new capital city. “Indianapolis. May it not prove itself unworthy of the honor the state has conferred upon it by making it her seat of government.” Or at least that’s how the few settlers who were still sober remember the occasion. It’s likely that the memory of the toast was a little blurry for most of the partygoers, given the fact that this was the final of 14 consecutive toasts penned by Fletcher in honor of the day and downed with swigs of whiskey. 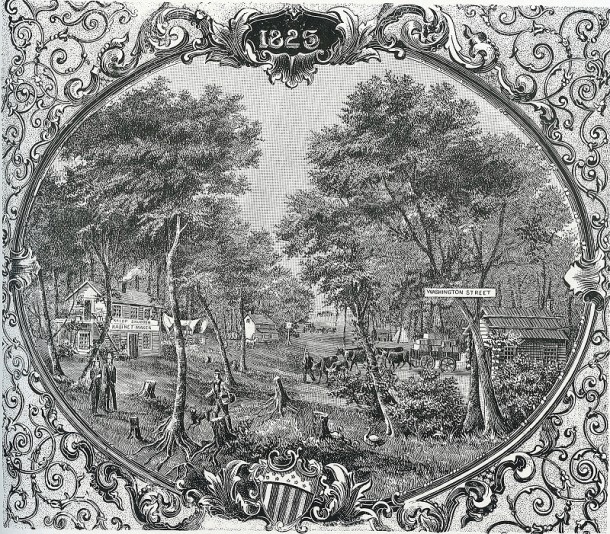 Washington Street circa 1825, as envisioned by painter T.B. Glessing. A native of London, Glessing came to Indianapolis in 1859 to assist in decorating the new Metropolitan Theatre. His talent was widely admired, and he was asked to paint two views of "old" Indianapolis for the city's half-centennial celebration in 1871. Neither painting has survived.

Although Indianapolis grew rapidly over the next few years, the trappings of civilized society tended to fall by the wayside on the 4th of July as a Wild West atmosphere gripped the city. The celebrations usually got underway in a halfway civilized manner, with the roasting of an ox, a reading of the Declaration of Independence, and a political speech or two. As the day wore on, however, blood-alcohol levels started to rise, which invariably led to drunkenness, mischief and even rioting.

In 1828, Marion County Clerk James M. Ray decided it was time to teach the children a more sensible way of celebrating our nation’s independence. In his position as Superintendent of the city-wide Sunday Schools, Ray organized a 4th of July parade featuring all of the city’s Sabbath scholars, with James Blake as grand marshall. After the children completed a march around the Circle, the entire town retreated to a shady grove near the Statehouse for singing, praying, speeches and a reading of the Declaration of Independence. The children were then fed a simple meal of ice water and rusk (hardened bread), and sent home with their mothers. Meanwhile, the men adjourned to a sugar grove on the east side of town for a hearty dinner.

The first event was a success, and the following year was even better, with a quarter-mile long procession of children dressed in their Sunday best, waving banners and marching four abreast through the streets. By the end of the decade, the annual 4th of July Sabbath School Parade had become an Indianapolis tradition.

This drawing by Christian Schrader shows the Circle as it might have appeared during the years of the Sabbath School Parade. Born in 1842, Schrader was a successful china merchant who spent his retirement years (1908-1920) sketching scenes from the memory of his youthful days in Indianapolis.

Still, this wholesome celebration drew its fair share of detractors. As James Ray recounted in a letter for the 1873 Semi-Centennial Anniversary of the Sunday Schools:

“After a few years, an alarm was raised by some of our extra patriotic people that our example was blotting out the glorious objects of the birthday celebration, and a decided effort was made to occupy the time in the old fashion, believing doubtless that our liberties would be lost if the people should continue to go to bed sober on the Fourth of July.”

The 1841 festivities nearly turned violent. A group of citizens, led by farmer Demas McFarland, decided to hold a more adult celebration directly across the street from the Sunday School picnic led by James Blake. Each leader attempted to increase the size of his crowd at the expense of the other by shouting speeches from opposite street-corners. Just when a fist-fight appeared inevitable, the skies broke into a downpour, driving the Sabbath scholars to shelter in the Methodist Church while McFarland’s group retreated to a nearby grove.

In an effort to cheer the dampened spirits of the McFarland party, a young sheriff’s deputy started firing a cannon. Unfortunately, this ploy literally backfired and the deputy blew off his left arm. Although the deputy recovered from his injuries, the mishap struck a near-fatal blow to the efforts of McFarland and others to organize an alternative 4th of July celebration.

The annual 4th of July parade wasn’t the only civilizing influence brought to bear by the Sunday schools. The first settlers were of varied religious beliefs, so the only time that the gospel was preached was when an itinerant preacher stopped in town on the Sabbath. After a while, Sunday became like any other day of the week in the settlement that was “locked up in the deep shadows of the woods.” In an attempt to stop this growing desecration, Dr. Isaac Coe organized an adult Bible class in February 1822. Unfortunately, the class was disbanded in the fall when most of the adult Bible scholars were stricken with ague. 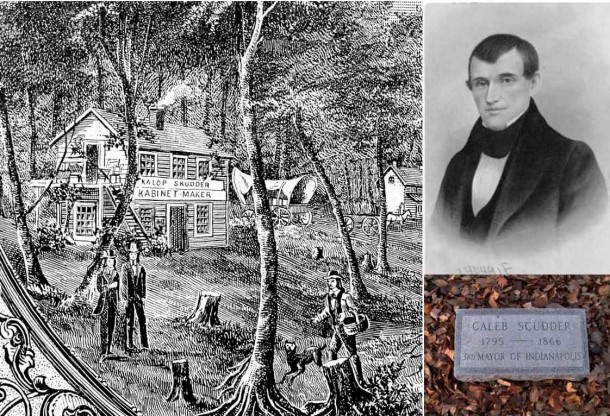 The first Sunday School classes were held in Caleb Scudder's workshop on West Washington Street, approximately where the Westin stands today. Although the sketch above was drawn many years after the frame building had been moved to Delaware Street, the odd spelling on the sign is accurate and reflects the handiwork of the city's first sign-painter, an immigrant from Germany.

Nonetheless, efforts continued to organize a Sunday school for the benefit of children. On April 5, 1823, the following notice was published in the Indianapolis Gazette: “The Indianapolis Sabbath-school will commence next Sabbath, April 6, at 9 o’clock in the morning at Mr. Caleb Scudder’s shop.” This was a frame building that stood near the southwest corner of the Statehouse Square. Thirty scholars showed up on the first day, but by the end of the year, enrollment had swelled to nearly 100. In 1824, the school moved out of Scudder’s cabinet-making shop and into the newly constructed Presbyterian Church.

In the early years, the Indianapolis Sunday School was met with some opposition. Charges were made that the instructors were paid a salary for their volunteer work, or a bounty for every child they recruited. A particularly nasty rumor was circulated by the veterans of the War of 1812 that the enrollment lists were sent to England, and every scholar automatically became a subject of the King of Great Britain. However, no charges of sectarianism were ever raised. Even though the first Sunday school was conducted under a Presbyterian roof, it was a non-sectarian “Union” school that served all Christian denominations.

The Union Sunday School only lasted five years. The Methodists broke off in 1829, and the Baptists followed in 1833. After that, each denomination organized its own Sunday school. Eventually, even the YMCA had its own well-behaved and attentive group of Sunday scholars, composed of “boot-blacks, news-boys, and other similar material, gathered from the hedges and highways.” 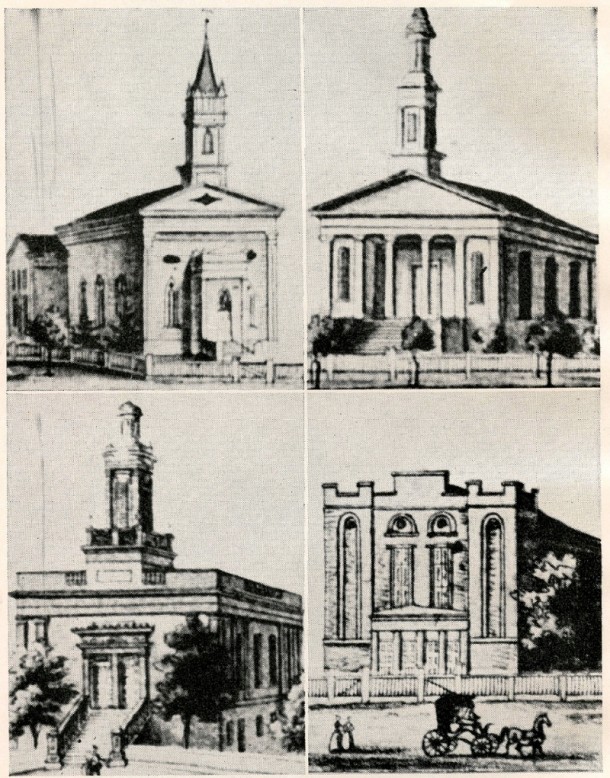 Some of the city's first church buildings were clustered on the Circle, as shown above in sketches by Christian Schrader. Pictured clockwise from top left: Christ Church (1837-1857); Second Presbyterian (1840-1867); Wesley Chapel (1846-1868); and First Presbyterian (1843-1866). Christ Church is only congregation remaining on the Circle. The building pictured above was moved to Georgia Street in 1857 for use by an African Methodist congregation prior to construction of the present building on the same site.

By 1855, the annual 4th of July celebration had grown to include a parade of 2,100 Sabbath scholars. But within three years, the party was over. Instead of participating in the big parade, the Universalist Sabbath School held its own picnic, furnished by Ovid Butler, in the woods just north of Northwest Christian University on College Avenue.

Other churches soon followed suit, prompting historian Jacob Piat Dunn to call Butler’s renegade picnic “the microbe that destroyed the old-time celebration.” But the simple fact was that the Sabbath School Parade had outlived its usefulness. When Indianapolis was a primitive frontier town, the settlers were eager to get out of the woods and spend the holiday in the city. Now that Indianapolis had grown into a bustling city, its residents just wanted to get out of town and spend a leisurely day in the woods. 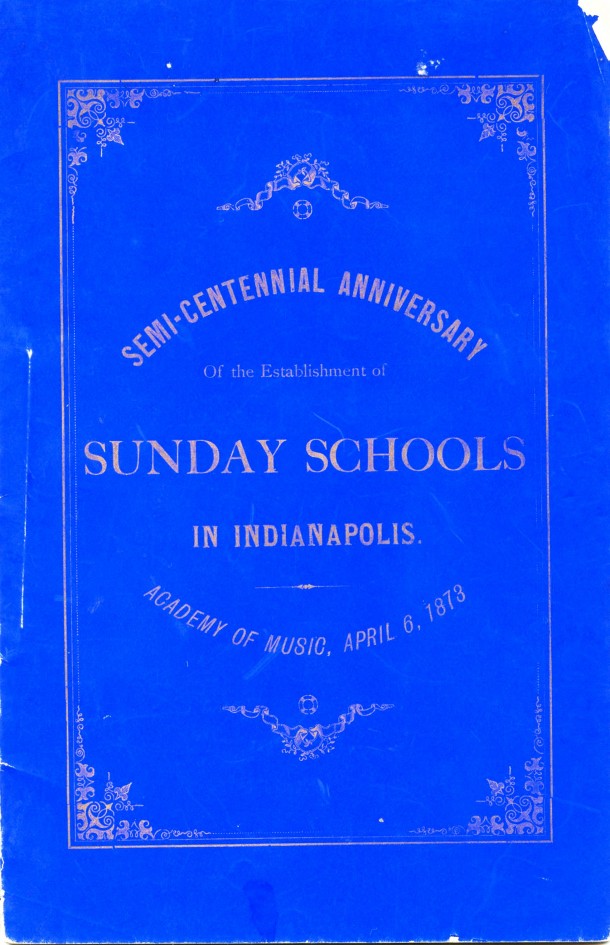 Some of Indianapolis' earliest residents reminisced about the city's first 4th of July celebrations during an 1873 event honoring the 50th anniversary of Sunday Schools. I recently found a copy of this commemorative booklet on eBay; however, you can also read it online at Google books.