More than 1,000 members and friends of the Maennerchor gathered at its old hall on Washington Street in June 1906 to march through downtown Indianapolis to the site of the German singing club’s future headquarters at Michigan and Illinois. Following a lively cornerstone-laying ceremony featuring remarks by Mayor Charles Bookwalter, the group returned to its old clubhouse for several hours of activity that The Indianapolis Star described as “enthusiastic jollification.”

Nearly seven decades later, however, the mood was neither jolly nor enthusiastic when the cornerstone was pulled from the rubble of the freshly demolished landmark and loaded on a flatbed truck along with a smattering of other salvage. 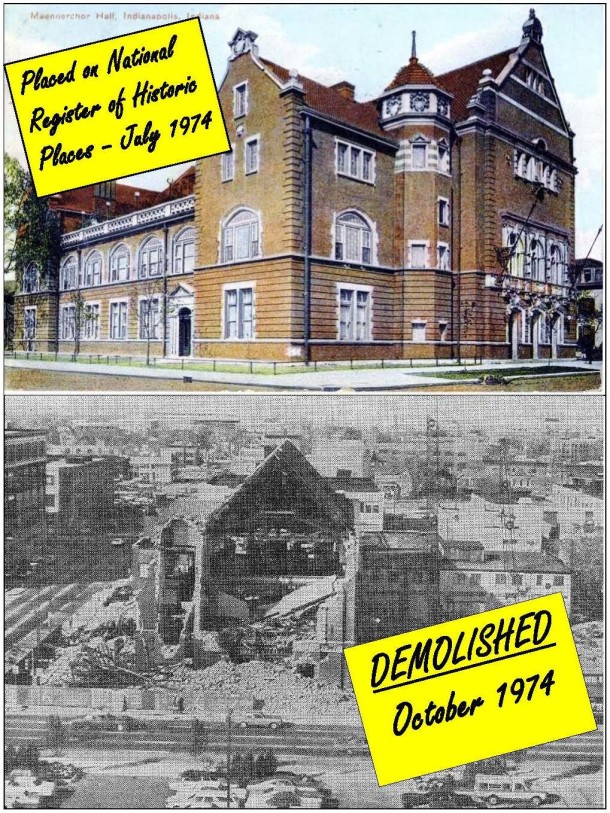 During its 68-year life span, Maennerchor Hall served as a music academy, a “Gay 90s” cocktail lounge, a USO club, and a law school. But its most lasting influence on Indianapolis culture may have come about in the summer of 1974, when the once-grand building sat vacant and vandalized as advocates for historic preservation and the arts scrambled to save it from the wrecking ball.

The building’s long journey from a jolly club for song to a rallying cry for preservation stretches back to 1854, when a small group of German immigrants formed an all-male choir called the Maennerchor and started performing at Washington Hall and other downtown venues.  By 1878, the club needed more space to accommodate its growing membership, so it rented the old City Hall (shown below) at 337 East Washington Street.  Impressive performances drew large crowds to the “Halle,” and the Maennerchor flourished in the Indianapolis community. 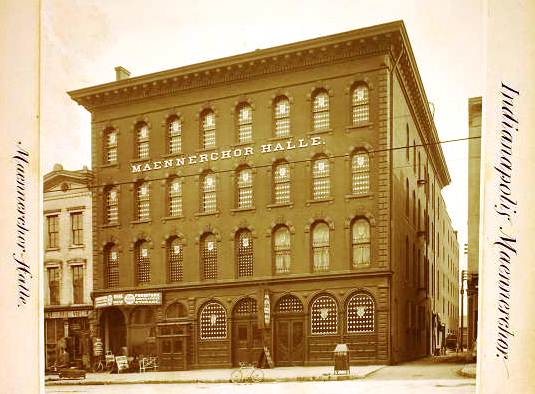 An antique photo album featuring six photographs of the old Maennerchor Halle at 337 E. Washington Street recently sold on ebay for $255. Because the album was dated 1906 – the year before the Maennechor moved to its grand new building at Michigan and Illinois – it was likely made as a memento of the old “halle.”

The Maennerchor marked its Golden Jubilee in 1904 with a three-day festival capped by the gift of a special gold medal from Kaiser Wilhelm, Emperor of Germany.  As the medal was presented to the Maennerchor on behalf of the Emperor during a banquet featuring foods from the Fatherland, the group rose to its feet and raised their glasses, shouting “Hock der Kaiser.”

As part of the celebration,  Mrs. Adolph Scherrer, president of the Ladies’ Maennerchor Society, presented the club with a box filled with $500 in gold.  Designed in the shape of a cornerstone, the gold-filled box officially kicked off the Maennerchor’s fundraising drive for the construction of a permanent home.  The effort was successful, and 11 years later the Maennerchor hired her husband, architect Adolph Scherrer, to design its palatial new building on the northwest corner of Michigan and Illinois streets. 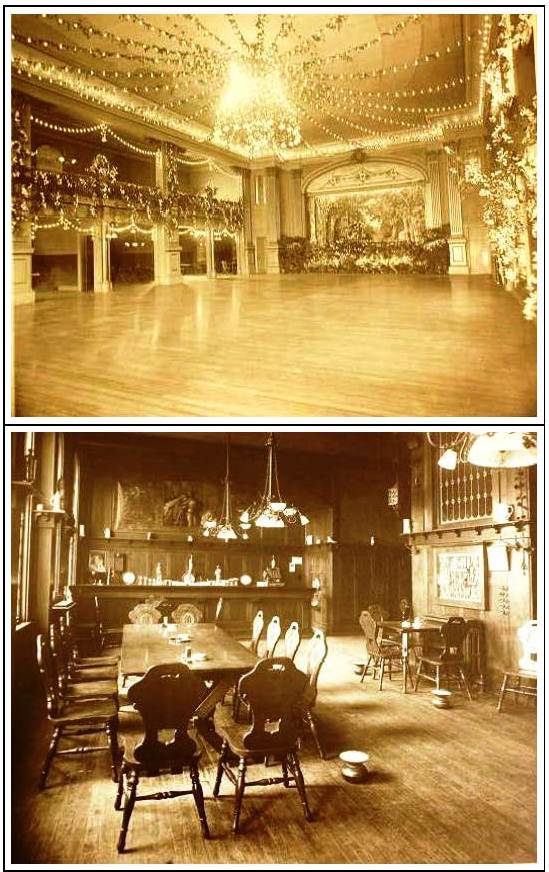 Built at a cost of $160,000, Maennerchor Hall opened to great fanfare in March 1907.  Speakers at the dedication ceremony included Vice President Charles Fairbanks, who praised the German community for building “this magnificent temple of music,” and James Whitcomb Riley, who entertained guests with his poetry.

“This noble edifice will stand many, many years,” Fairbanks told the crowd. “Seasons will come and go, following each other in their ceaseless progression. Here our children and their children will assemble and feast upon song.”

But the Maennerchor was hit hard by the wave of anti-German sentiment that swept Indianapolis during World War I. In an effort to demonstrate their allegiance to the United States, the Maennerchor’s members renamed their grand hall the “Academy of Music” in 1918. Stonecutters were hired to chisel away the old “Maennerchor” name, as well as the club’s motto, “Joyous in song, loyal and true, shall be our motto evermore.” These words had been carved in stone in German over the main entrance on Illinois Street. 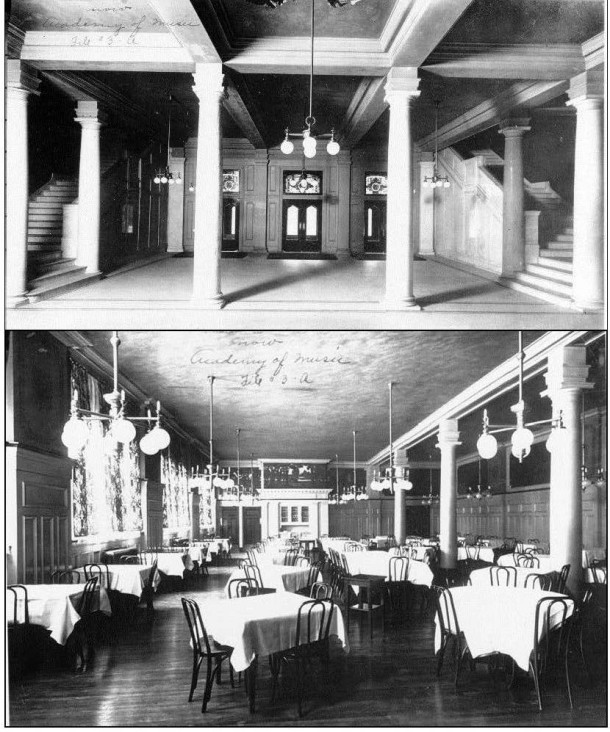 Interior views of Maennerchor Hall in the early 1900s

In 1922, the Benevolent and Protective Order of Elks came close to buying the Maennerchor building after it was forced from its lodge on Vermont Street by construction of the War Memorial.   The Elks’ preliminary plans also called for recruiting 1,000 new members and razing an adjacent 1830s house to construct a four-story hotel that would be connected to the Maennerchor building. The deal was scuttled, however, after members expressed concern about the proposed project’s $500,000 price tag.

The Maennerchor had been able to remain afloat during WWI and the early years of the Great Depression thanks to the generous patronage of John P. Frenzel, president of Merchant’s National Bank.  Frenzel had even made provisions in his will for the continuing support of the Maennerchor upon his death in 1933.  When the will was later invalidated, however, the Maennerchor was forced to relinquish its magnificent building within a matter of months. 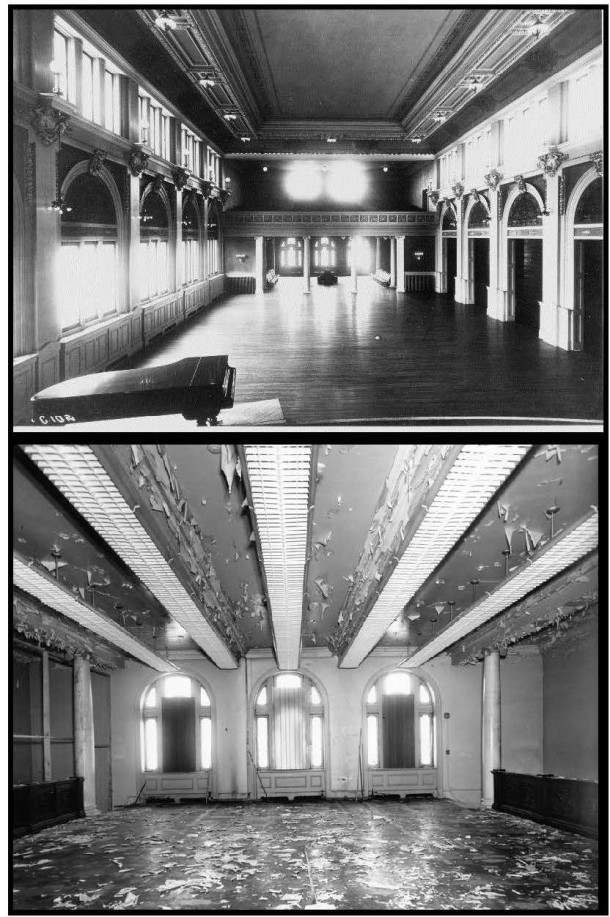 The Maennerchor’s second floor music hall, shown during its heyday and in 1974. (Photos courtesy Indiana Landmarks)

In the late 1930s, concert promoter Tom Devine leased the Maennerchor building and opened a music hall with a “Gay 90s” cocktail lounge and grill.  Devine had made his mark on the local entertainment scene as manager of the Indiana Roof Ballroom, where he caused a stir by booking novelty acts such as a robot and fan dancer Sally Rand. Devine’s ambitious enterprise folded after a few years, and the Maennerchor building was briefly used by the USO to entertain servicemen during WWII. In 1946, Indiana University purchased the building from the Maennerchor Hall Association for use as a night law school.

When Vice President Fairbanks spoke at the Maennerchor’s dedication ceremony some 40 years earlier, he predicted that for years to come, the building would serve as “the center of influences which will tend to uplift the community, always making it better, giving it that sweeter tone and gentler grace.”  He clearly had no idea that the building would ever be repurposed as classrooms for lawyers-in-training.

During its 24-year run in the Maennerchor building, the Indiana University (now McKinney) School of Law trained many of the state’s most distinguished attorneys, judges and elected officials. By the late 1960s, however, it had outgrown the antiquated building, and funds were raised for a new law school on West New York Street. The school’s 95,000 law books were moved to the new building in August 1970, and the students and faculty followed shortly thereafter.

Many saw the law school’s departure as the beginning of the end for Maennerchor Hall. A headline in The Indianapolis News read, “Ghosts Weep as Law School Moves.” 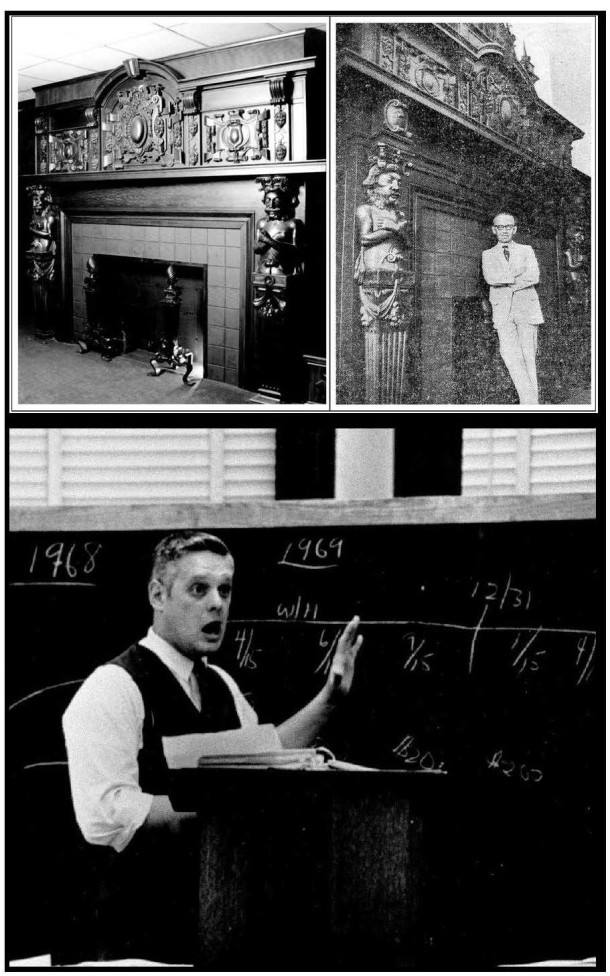 Dean Cleon Foust (above right) poses with the massive fireplace before it was removed from Maennerchor Hall and installed at the new law school. The fireplace was moved again when the new facilities were built, and now graces the Woodward Room in Inlow Hall. Another longtime fixture to make the move from the Maennerchor to the school’s present day facilities was Professor Lawrence Jegen (above), who joined the law school in 1962 and has simultaneously educated and terrified thousands of Indiana lawyers, including me.

The law school years had taken its toll on Maennerchor Hall. Many of the building’s interior decorations had been damaged or obscured when the large halls were divided into classrooms. Additional architectural features were removed for use in the new law school building, including stained glass windows and a 10-foot wide fireplace mantle featuring bronze figures of Don Quixote and Mephistopheles.  The plank top from the Maennerchor’s old bar that served as the dean’s desk remained behind, however, in the now-abandoned building.

Indiana University put Maennerchor Hall up for sale in 1973, asking $330,000.  Funds raised by the sale would be used to help offset construction costs for the new law school.  Despite pleas from the community, the university balked at donating the building to an organization that would agree to restore and maintain it. A year later, American States Insurance bought the Maennerchor.

Advocates for historic preservation and the arts were heartened when American States pledged to donate the landmark building to any group that could find a self-sustaining, contemporary use for it. At the time, a spokesman for the insurance company assured the various stakeholders: “You don’t need to worry about us tearing this building down. I’m sure you can come up with a workable solution.”  The offer was not open-ended, however.  A six-month deadline was imposed on advocates seeking to save the Maennerchor.

The Indiana Historic Landmarks Foundation (now Indiana Landmarks), the Arts Council of Indianapolis and other interested parties spent the next several months scrambling to put together a plan.  The building’s greatest asset was its 8oo-seat, acoustically perfect concert hall.  A feasibility study determined that the cost of necessary restoration and modifications would range from $1 million to $1.5 million.

Unfortunately, the Maennerchor was not the only local landmark struggling to survive in 1974. The Lilly Foundation had pledged $4.7 million to restore City Market. The Athenaeum was crumbling, and the Indiana Repertory Theater was seeking $1.5 million to restore the old Indiana Theater.

However, the Maennerchor’s backers were able to cobble together enough money to pay taxes and maintenance costs for one year, so long as American States would agree to defer demolition until 1975.  According to a report in The Indianapolis News, the company rejected the offer because it wouldn’t look good for “a group of people to try to raise money to pay taxes for an insurance company.” 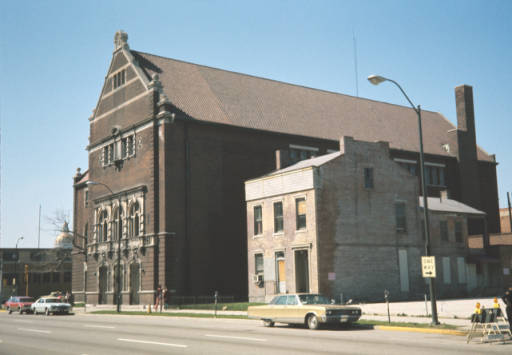 The brick house to north of the Maennerchor on Illinois Street was built it in the 1830s and was believed to be the oldest house in the Mile Square at the time it was demolished in 1974.

Two weeks later,  Maennerchor Hall was a pile of rubble, along with an adjacent 1830s building that was believed to be the oldest remaining house in the Mile Square. 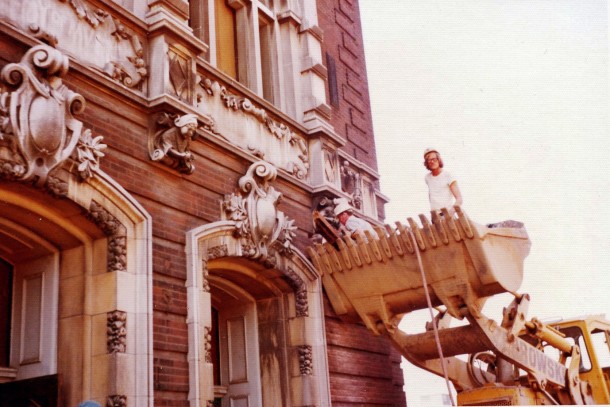 Shortly before demolition started, News writer David Mannweiler penned a column titled “A Sacrifice for History?” in which he suggested that the loss of the Maennerchor might not be in vain if it spurred efforts to tighten protections for historic landmarks.

The following year, the Indiana General Assembly enacted legislation to empower the recently created Indianapolis Historic Preservation Commission and put it under the control of the Department of Metropolitan Development. The Council appropriated $50,000 for a staff. 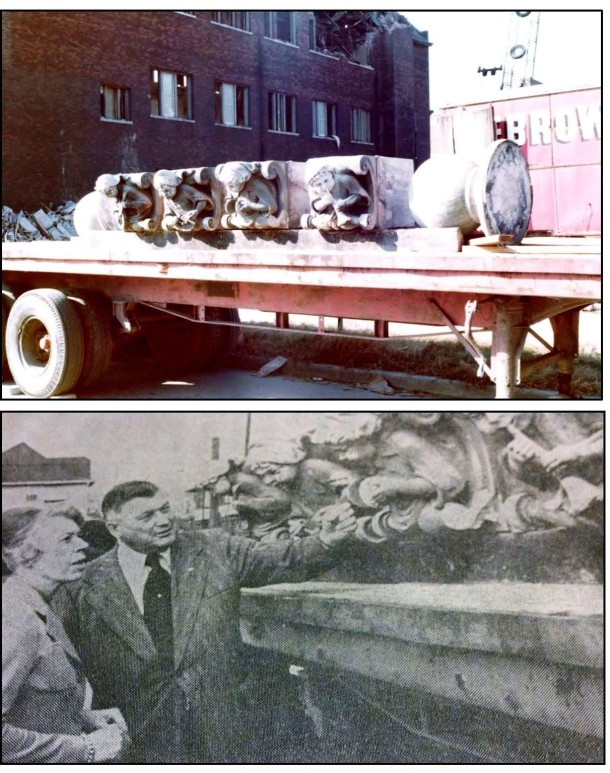 As the building was demolished, four musical cherubs were removed and loaded on a flatbed truck. A few days later, Ed Zebrowski presented the stone carvings to Mrs. Mildred Compton, director of the Children’s Museum. At the same time, a stone lyre and the cornerstone box from the 1907 building were donated to the Indianapolis Museum of Art. Top photo, Indiana Landmarks collection.

Although historic structures in Indianapolis continue to fall victim to decay and commercialization, Maennerchor Hall was one of the last great city landmarks felled by a wrecking ball.  In the 40 years since its demolition, a dozen historic districts have been established and hundreds of historic structures have been saved through the work of the Indianapolis Historic Preservation Commission, Indiana Landmarks, and dedicated preservation advocates.

And as for the Maennerchor itself?  The day its building was demolished was not The Day the Music Died.  Now in its 160th year, the Indianapolis Maennerchor remains one of the oldest continuously performing groups in the United States. New members are welcomed. 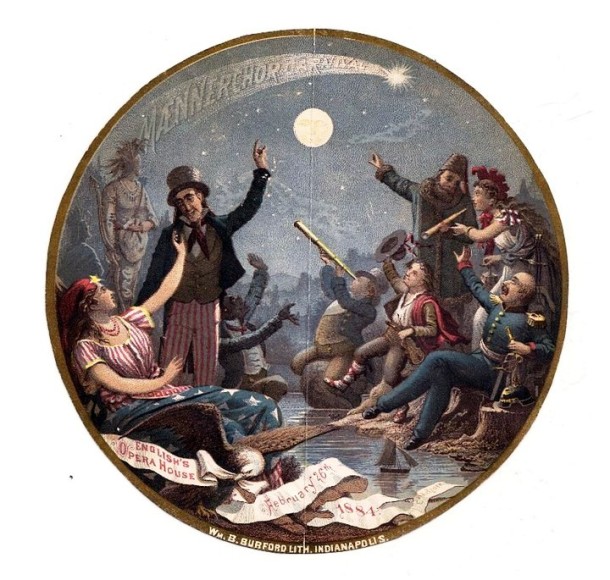 An 1884 invitation to the Indianapolis Maennerchor’s Carnival at the English Hotel sold on ebay two years ago for $45. 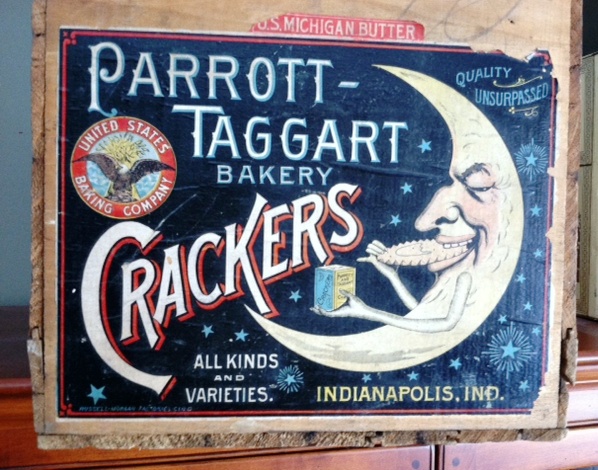