I was digging through my purse earlier this week and ran across a small white card with a black magnetic strip. After puzzling over its origin for a few minutes, I remembered that it was the nondescript key to an equally nondescript hotel room where I recently stayed on a business trip. I tossed the card in the trash, but thankfully light-fingered tourists from earlier times decided to keep their keys as souvenirs, thus spawning one of the more popular categories of hotel collectibles.

The simple hotel key evolved into a souvenir in the late 1800s. In order to discourage travelers from accidentally carrying off the keys to their room, hotels began attaching heavy brass tags to keys. This strategy backfired, however, when hotel guests started intentionally carrying off the ornate tags as a keepsake of their trip.

If you visited Indianapolis during the 1850s through the 1880s, you would have been proud to take home a key to the Bates House. Constructed in 1852 on the northwest corner of Washington and Illinois Street, the Bates House was billed as one of the finest hotels in the Midwest. Over the years, three presidents stopped there, including Abraham Lincoln, who delivered an address from the hotel’s Washington Street balcony en route to Washington for his inauguration. As travel to Indianapolis increased in the post-Civil War boom and a wave of newer hotels were built, the Bates House gradually lost its luster and was razed in 1901 to make way for the Claypool Hotel. Keys to the Bates House are as highly sought after today as they were in the 1800s, but are much more difficult to come by. Keys to the Claypool, which usually feature a more modern leather tag, are fairly common. As recently as this week, two Claypool Hotel keys were offered on ebay for a starting bid of $14.99. 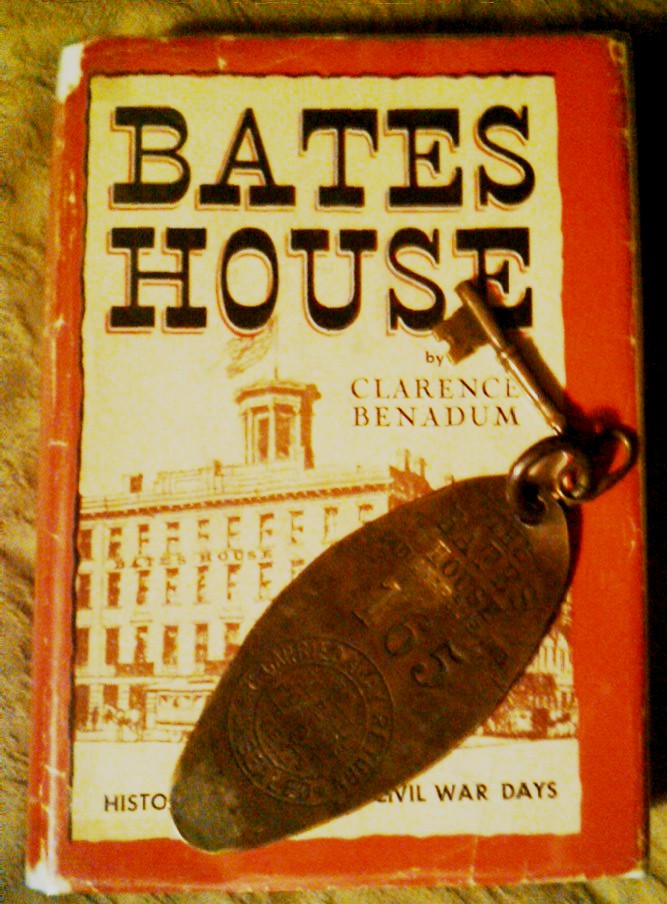 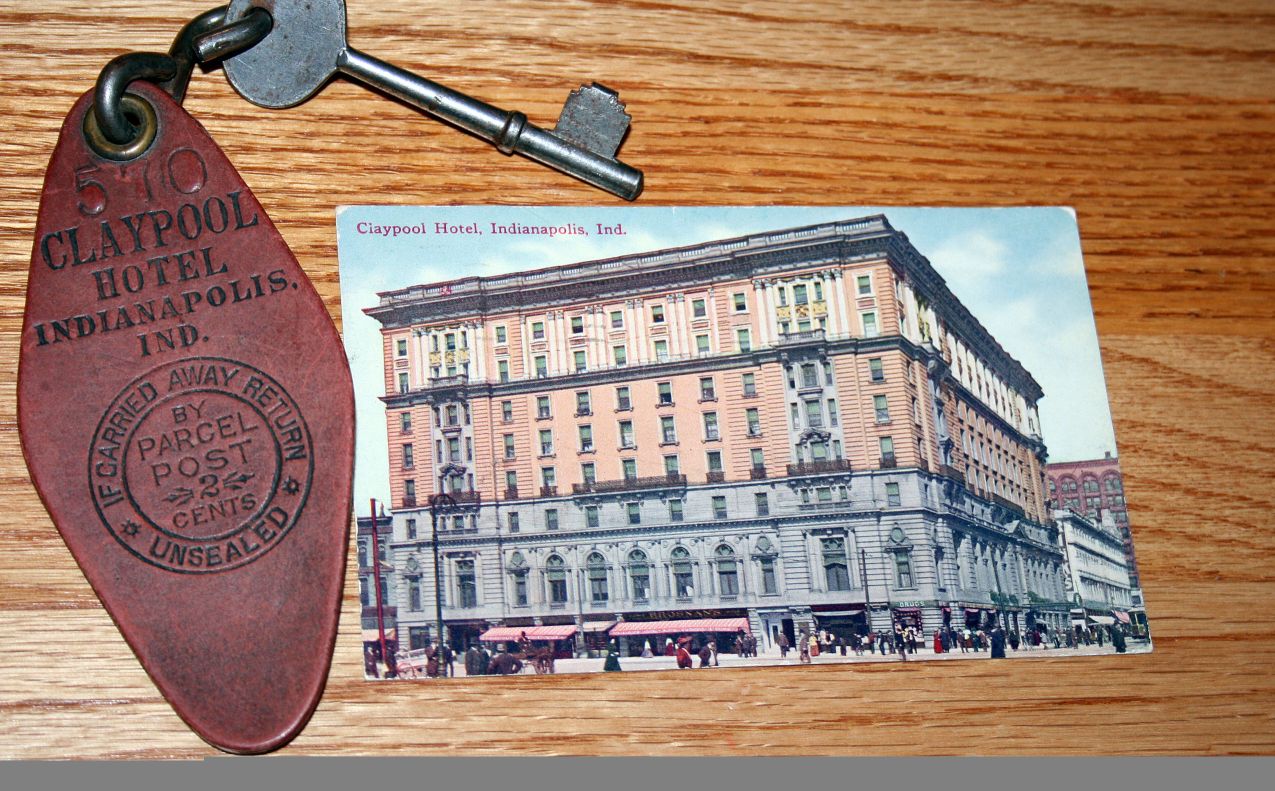 The English Hotel and Opera House was a favored spot for tourists in the early 20th century. With its elegant interiors and sweeping views of the Soldiers’ and Sailors’ Monument, the English was the premier hotel in Indianapolis. By the 1940s, however, the grande dame of Indianapolis hotels was showing her age, and was demolished in 1948 to make way for a modern J.C. Penney store.

Collector Harry Cangany acquired a small collection of Hotel English items while researching his book, “Mr. Leedy and his House of Wonder.” Ulysses Grant Leedy was the pit drummer at the English Theatre until his drum manufacturing business called for his full-time attention. Pictured below are two examples of engraved silver pieces from a Hotel English tea set, three different styles of key tags spanning the years of the hotel’s existence, and a souvenir plate. 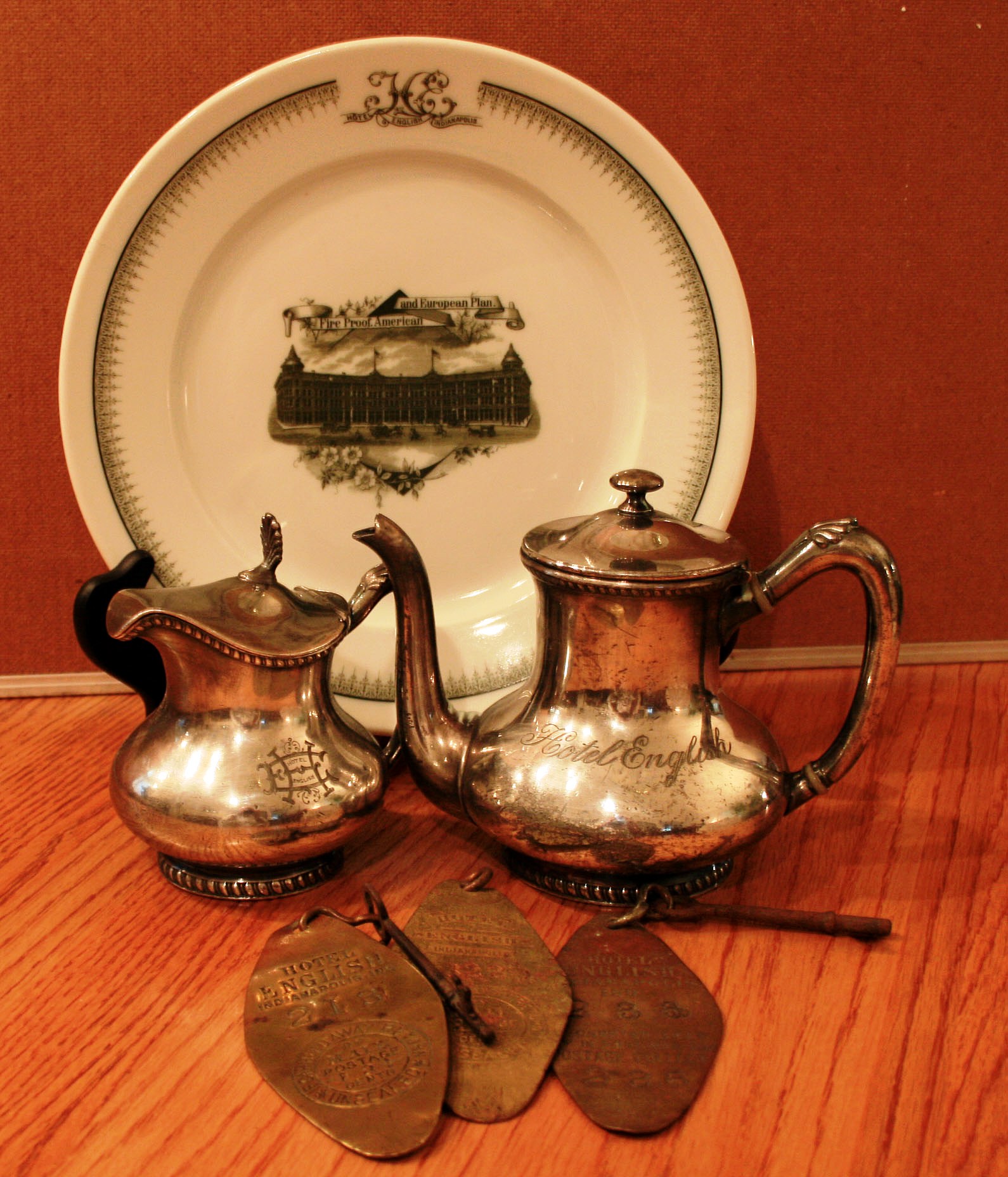 Although it’s likely that some of Hotel English’s silver left the building stowed away in suitcases and knapsacks, collectors were able to acquire some pieces as early as 1920 when hotelier D.J. McMahon held a massive auction of the hotel’s contents. A copy of the auction catalogue — complete with realized prices for many items — provides a glimpse of life in the English back in the day. Based on descriptions of the contents, the most expensive rooms in the newer section of the English appear to be Rooms 205, 246, and 336, with nearly 50 yards each of Axminister carpeting and furnishings such as gilt beds, walnut library tables, and a “handsomely finished Louis XV duchess dresser.”

I acquired the key to Room 266 a few years ago, and have always wondered which famous visitors might have carried around the key during their stay at the English. Sarah Bernhardt, perhaps, or Laurence Olivier? So after reading the auction catalogue I was a little disappointed to discover that Room 266 was the only bedroom in entire hotel furnished with a small area rug instead of carpeting and was one of the few rooms with a cheap cotton mattress as opposed to a more comfortable curly horsehair mattress. All of this points to Room 266 either serving as a room for people who were severely allergic to horses, or more likely, quarters for a maid accompanying her wealthy employers on their travels.

The Hotel Lincoln, an impressive 14-story flatiron building, was completed in 1921 and was a fashionable stop for tourists for the next 50 years. The Lincoln was razed in the 1970s to make way for the Hyatt Regency. Harry Cangany, who has fond memories of attending the annual Christmas party for his father’s office at the Lincoln, has kept an eye out for Lincoln collectibles such as the water pitcher, glass and key pictured below. 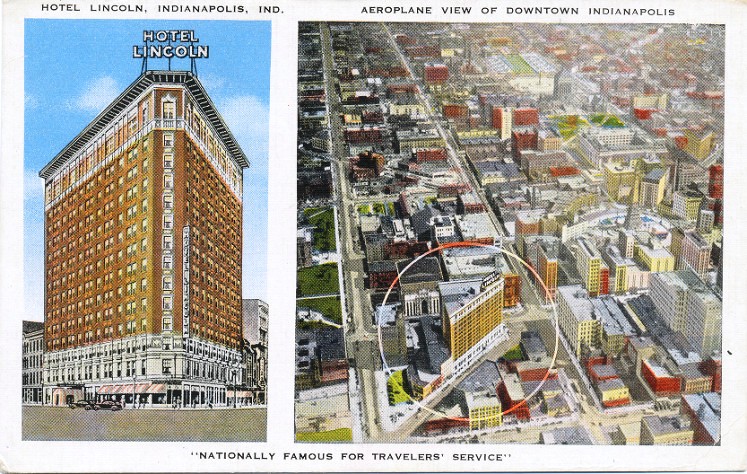 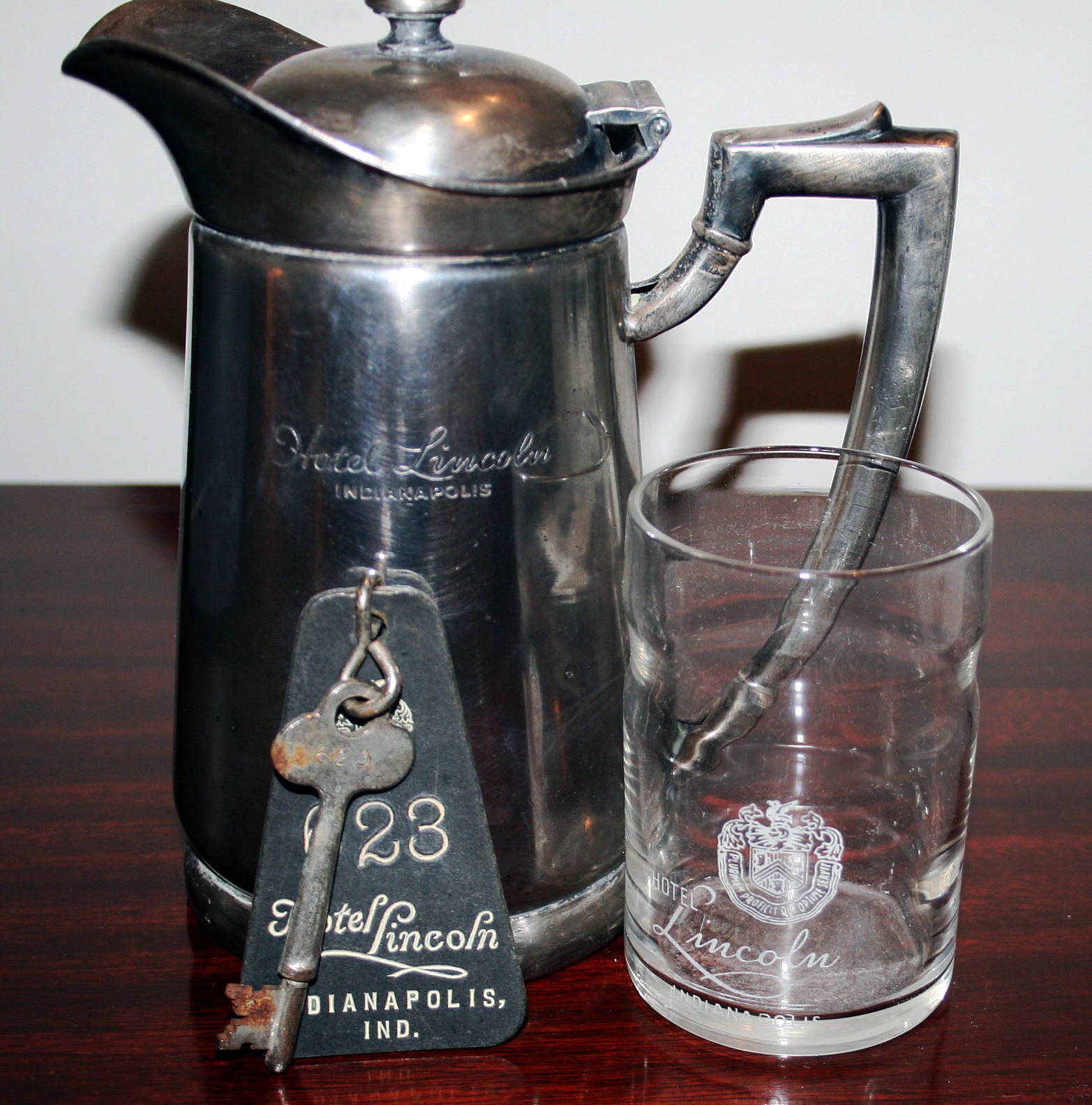 One of the more unusual tags from an Indianapolis hotel was acquired by collector David Yount. The Stock Yards Exchange and Hotel Building, pictured below in Hyman’s Handbook of Indianapolis, 1897, was built in the late 1870s to cater to Indianapolis’ booming livestock industry. And cater it did, with a saloon that was conveniently open 24 hours a day. The Exchange building stood until 1973, when it was razed to make room for Lilly’s Kentucky Avenue plant. 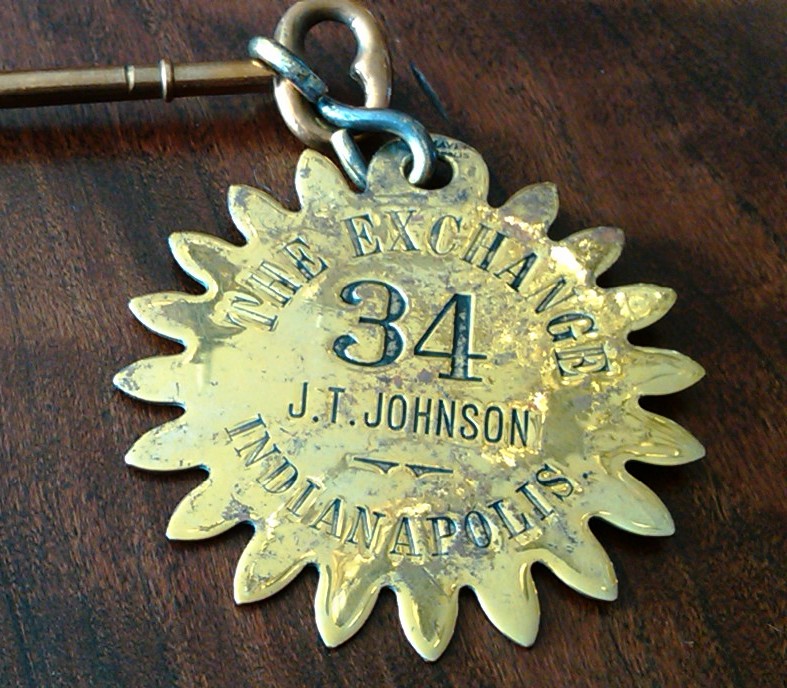 Billed as “Truly a Good Hotel”, the Hotel Washington was completed in 1912 and at 17 stories, was the tallest hotel building in the state. It operated as a hotel until 1963, and passed through a series of owners until the building was acquired by the Indianapolis Symphony Orchestra Foundation in 1997. Both the spoon and match holder pictured below would have been purchased by guests as souvenirs of their stay. 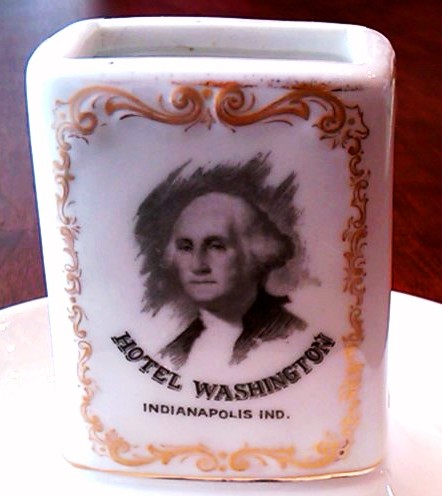 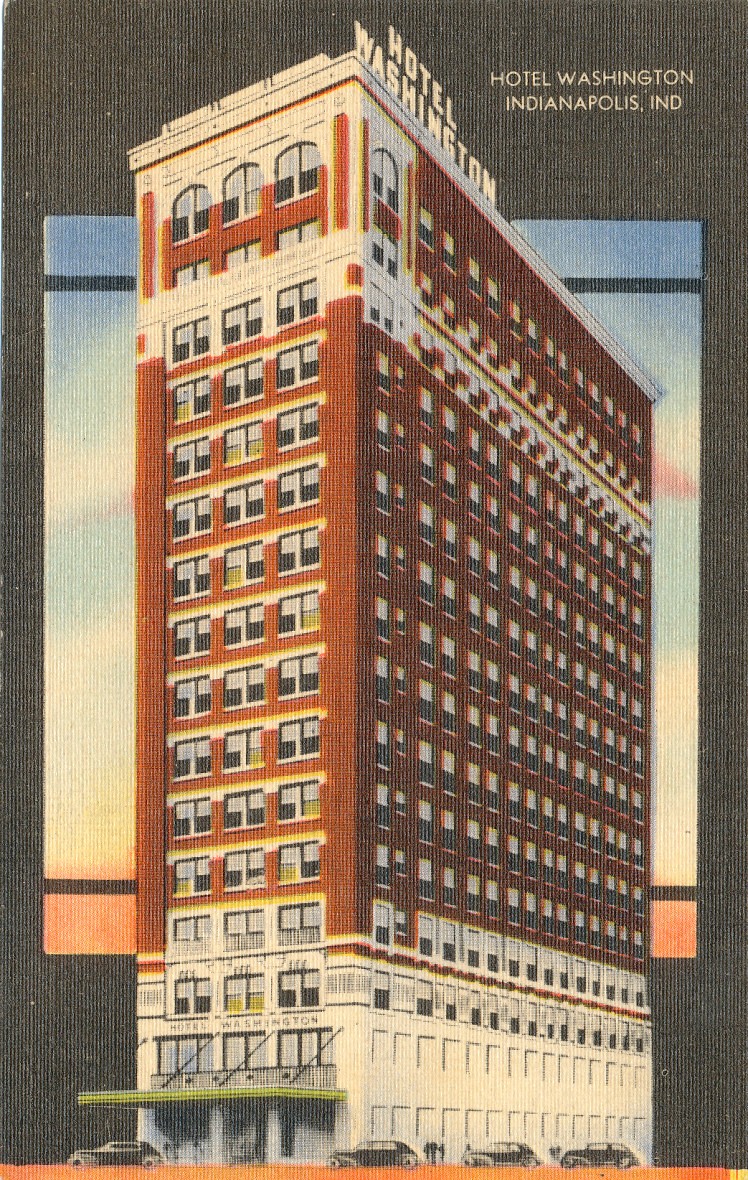 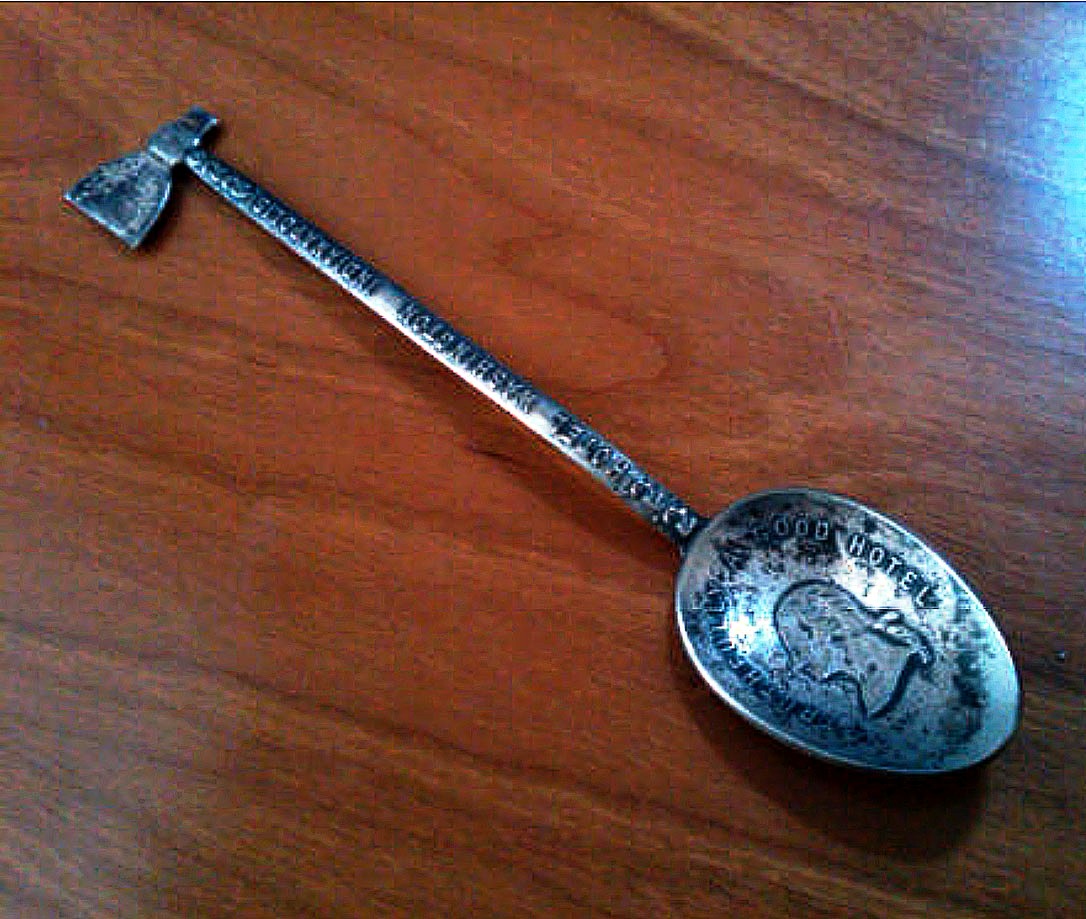 Luggage labels and matchbooks were hotel souvenirs that were actually intended to be carried off. If you want to find a piece of vintage luggage with a label from an Indianapolis hotel, you probably should look in Louisville or Terre Haute or other Midwestern cities where travelers to Indianapolis lived. However, unused labels crop up from time to time on ebay, although you have to be careful to make sure that you are purchasing an original and not a modern reproduction. The original labels below for the Claypool Hotel and the Hotel Lincoln recently sold on ebay for $7 each. Matchbooks are also easily found on ebay, such as the three Claypool matchbooks, below. 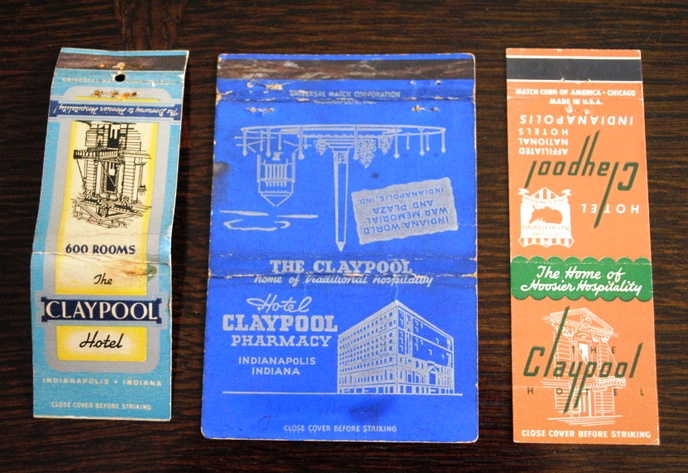 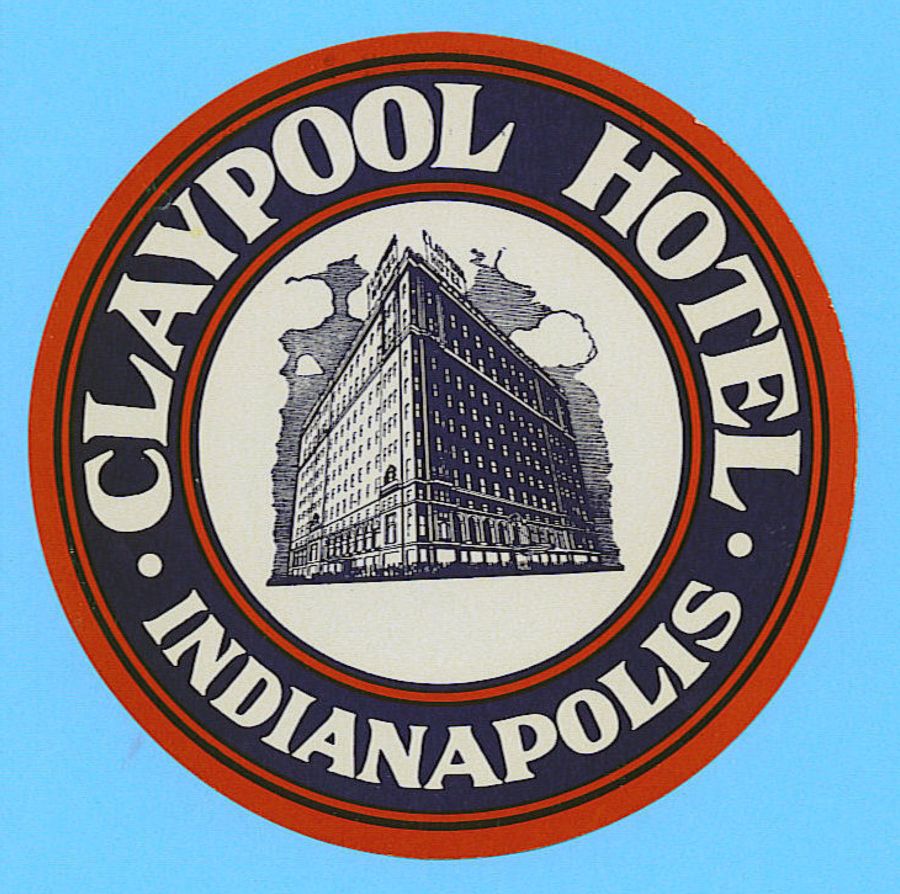 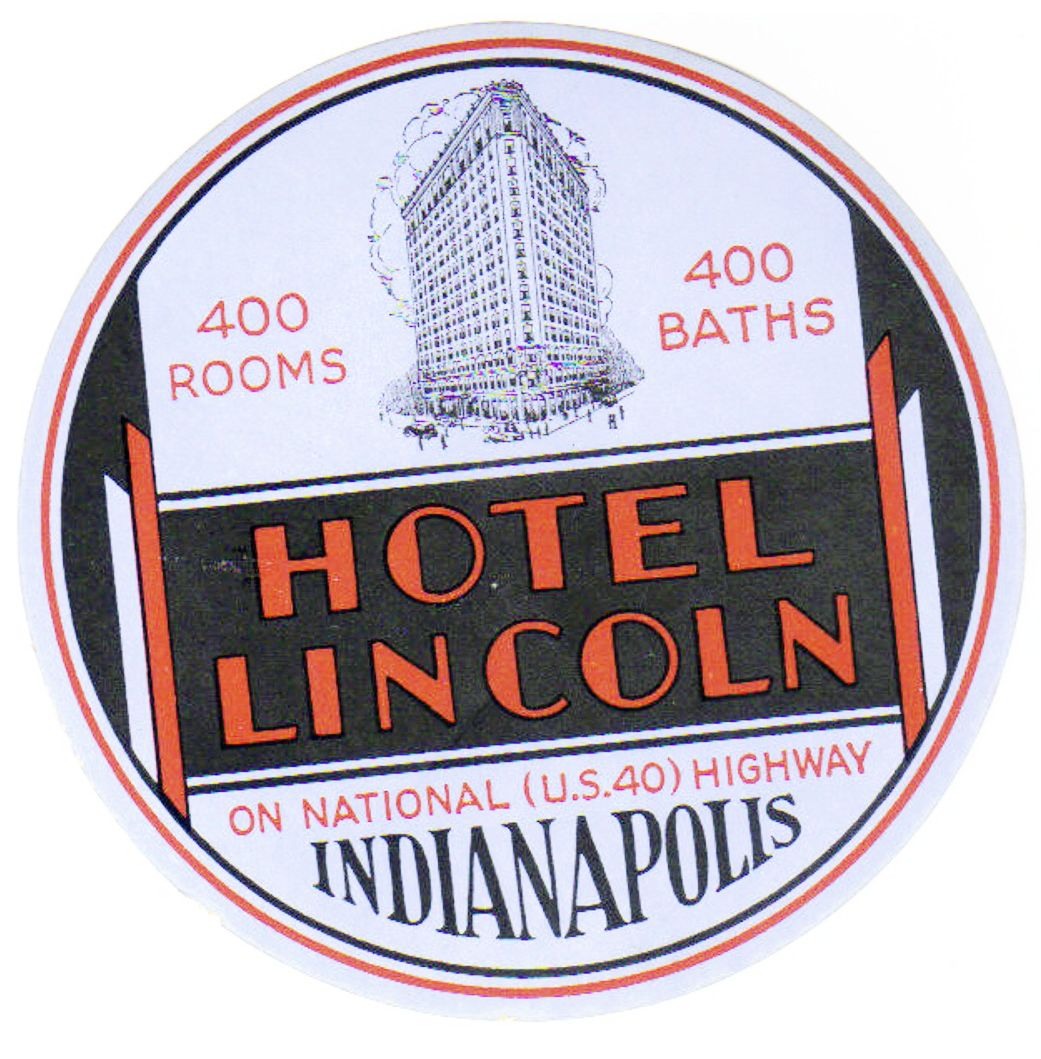 While luggage labels were an inexpensive form of promotion, hotels also turned to other forms of advertising to lure visitors. This lighted clock, found by David Yount, may have hung on the wall of a tavern or bus station to inform weary travelers that they could “rest assured” if they chose the Hotel Severin. 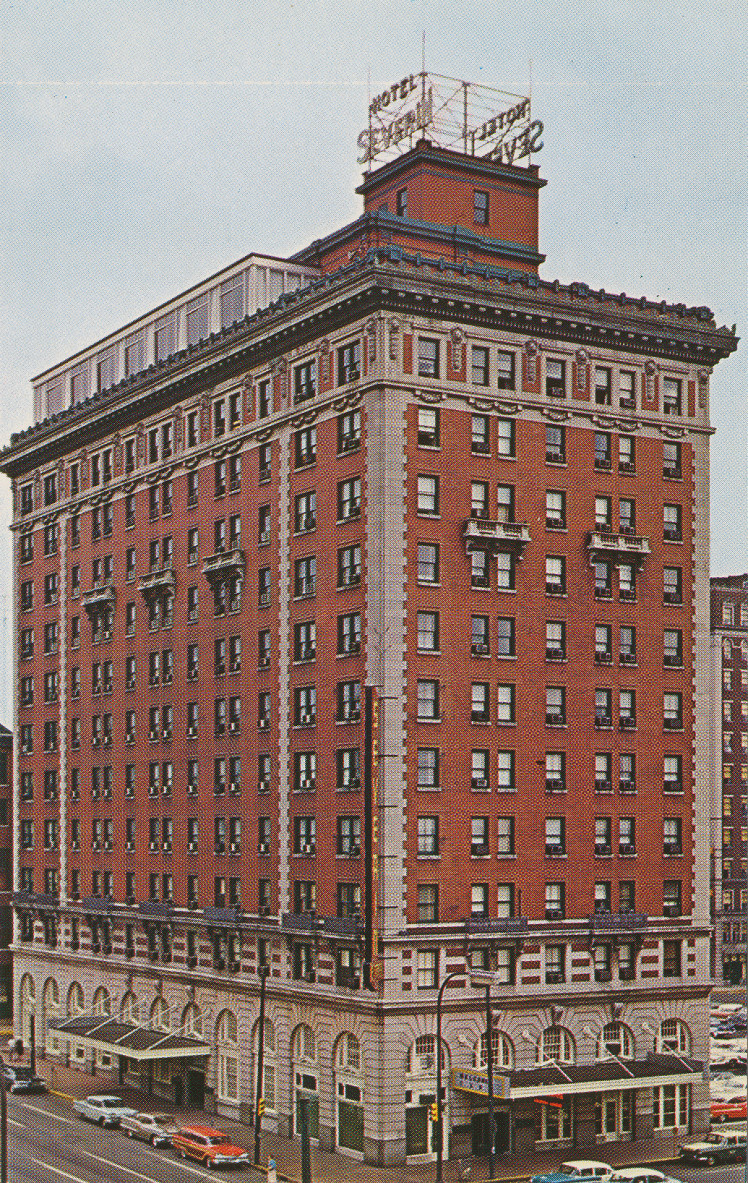 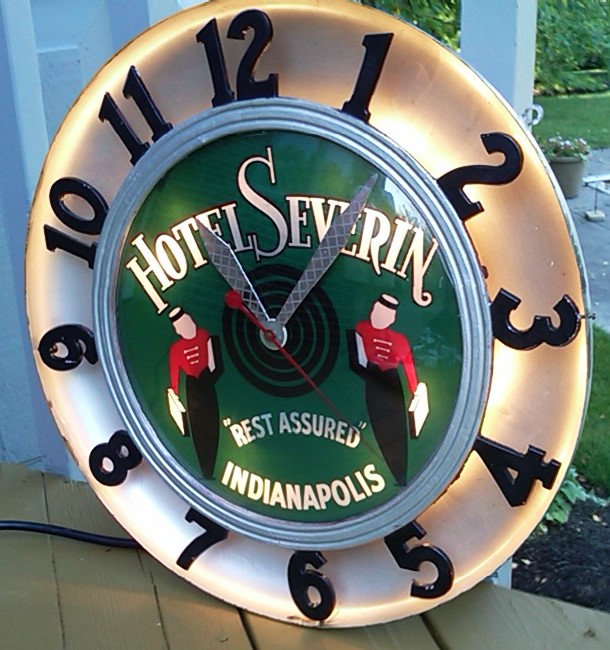 Of all the grand hotels featured in this article, the only one still serving guests is the Omni Severin. With the exception of the Claypool, which was badly damaged by fire, and the Hotel Washington, which has been repurposed as office space, all of the others were razed to make way for more lucrative development. Where did all the chandeliers, murals, doorknobs, woodwork, and other pieces of the past end up when these hotels were demolished? You might be surprised, when I take up the topic of hotel salvage in my next “Indianapolis Collected” column.