Ever since the Bates House was demolished in 1901–with the Denison to follow in 1933, the English in 1948, the Claypool in 1969, and the Lincoln in 1973–eager collectors and cash-hungry salvage dealers have rushed ahead of the wrecking ball in an effort to grab a piece of hotel history before the walls came tumbling down.

One of the savviest salvagers was Ed Zebrowski, the self-proclaimed “wrecker with a flair.” Zebrowski was the man behind the wrecking ball that felled many of Indianapolis’ most majestic buildings. Love it or hate it – and most HI readers probably lean toward the latter – there’s no dispute that when Ed Zebrowski tore down a building, it was a big event. Zebrowski’s first show occurred by accident when he decided to hire an organist to entertain the large crowds gathering each day during lunch to watch the destruction of the 12-story Knights of Pythias building. By the time he was awarded the contract to demolish the Claypool Hotel in 1969, he had honed his marketing skills to a level approaching P.T. Barnum’s. 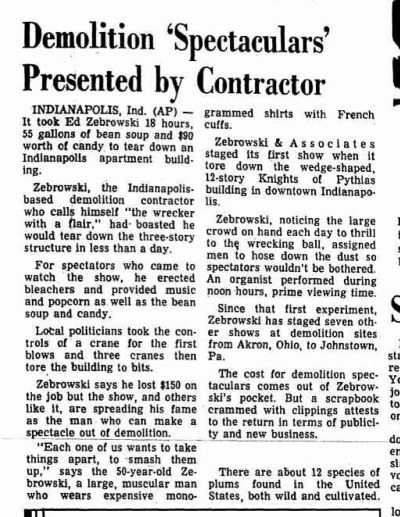 The Claypool closed following a fire in 1967, and Zebrowski put together a finale on June 14, 1969 that ensured the grande dame of Indianapolis hotels went out in style. The Rotarians, who were long-time tenants of the Claypool, were invited to a farewell lunch in the Riley Room. Later in the day, the public was invited to a dinner-dance in the lobby, which was followed by an auction. At midnight, Zebrowski ushered the crowd from the lobby to a safe viewing distance in the street. As floodlights gave onlookers a last look at the Claypool, a wrecking ball swung from a crane and the demolition began.

Never one to miss a chance at self-promotion, Zebrowski had souvenir paperweights and pen holders fashioned from marble and hardware that were salvaged from the hotel. I purchased the doorknob paperweight some years ago on ebay and found the drawer pull blotter last summer at a local antique shop. The pen holder was acquired directly from Zebrowski, and is owned by relatives of Edward Fay Claypool, the Connersville millionaire who financed the hotel’s construction. 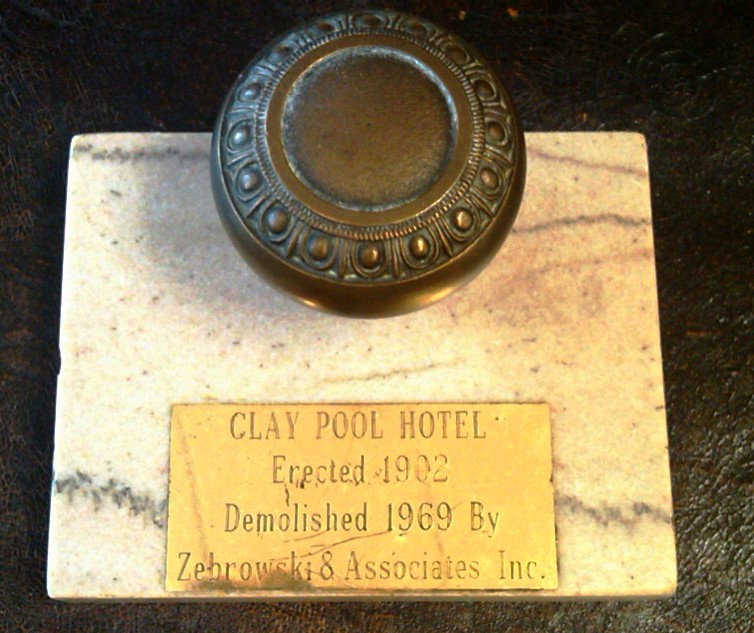 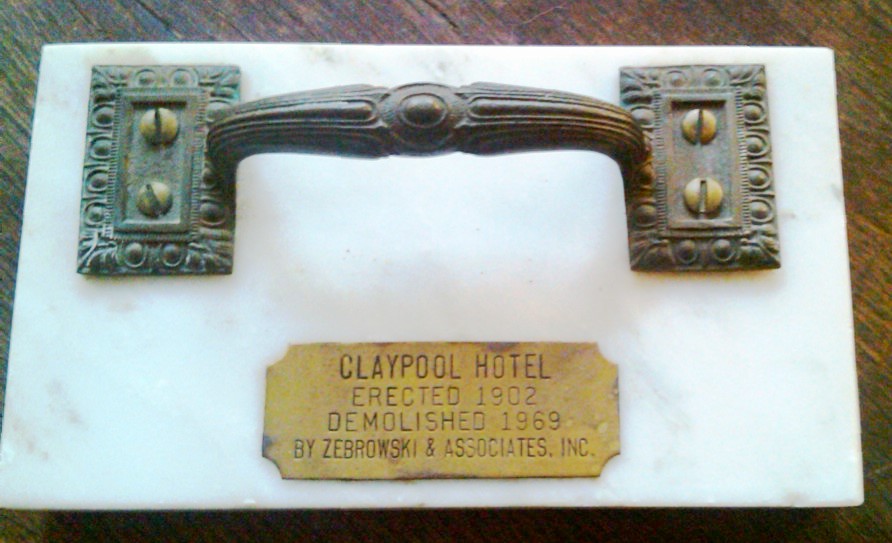 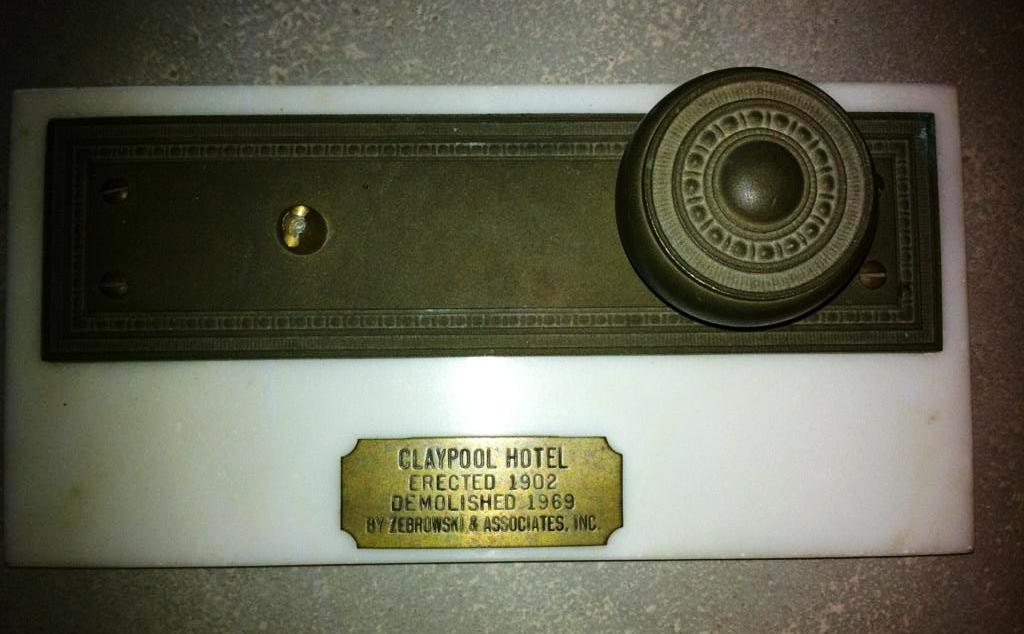 Murals, woodwork, chandeliers, and other trappings were removed during the demolition process and sold to the public. More than 40 years later, Claypool pieces still come up for sale. For example, Bloomington antique dealer Jeff Scofield recently acquired intricately carved doors and a frieze from the estate of woman who had installed them in her Carmel beauty shop. He sold his Claypool cache last year to a couple of history enthusiasts who planned to incorporate the doors into their newly constructed home. 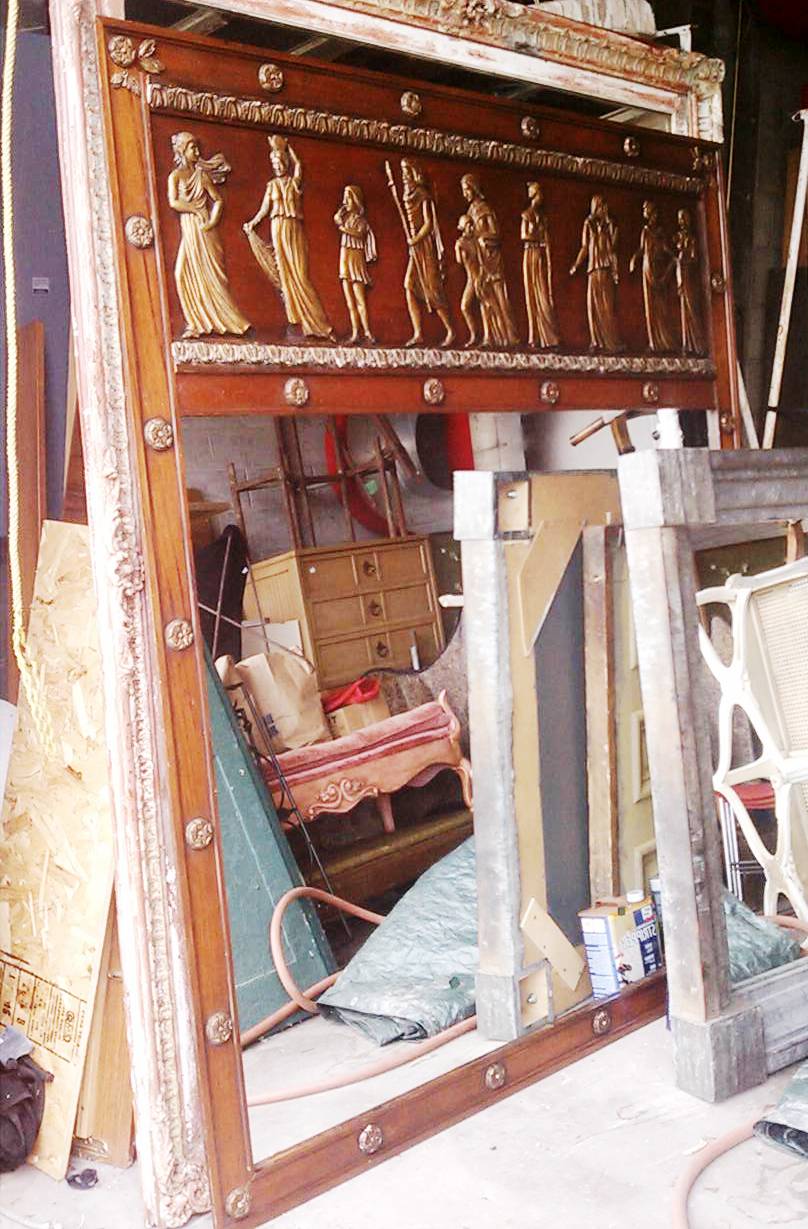 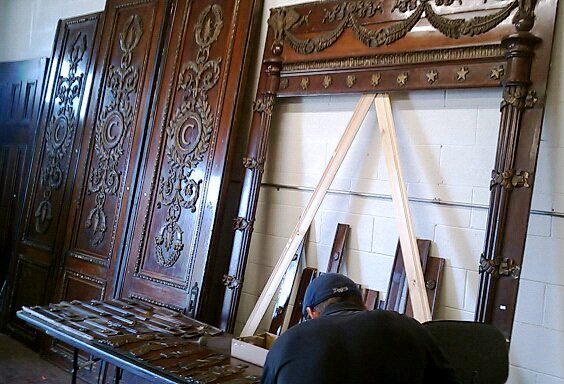 If a dealer tells you a piece comes from the Claypool but does not have clear evidence, you should head down to the Indiana Historical Society and take a look at their extensive collection of Claypool photographs. For example, the frieze and woodwork pictured above are featured prominently in photos of the Empire Room. Photos of the Italian renaissance lobby show the wrought iron railing below that was salvaged and incorporated into a fence at 52nd and Washington Boulevard.

The fate of many fixtures from the Hotel English was also well-documented. As Joan Hostetler recently discussed in a Then & Now column, William English installed a series of limestone medallions in bas-relief across the front of the hotel that featured members of his family and certain Indiana governors. The medallions were sold when the hotel was demolished. According to a 1957 book on the history of the Circle, many of the medallions were purchased by benefactors who donated them to places associated with the governors. For example, Thomas Posey and William Henry Harrison were donated to Vincennes University, Thomas A. Hendricks was given to his namesake school in Shelbyville, and David Wallace was purchased for the Lew Wallace home in Crawfordsville. Oliver P. Morton was returned to his hometown of Centerville (although one HI reader reports that Governor Morton’s statue has fled to the suburbs and is now residing in the Village of West Clay. I have not been able to substantiate this rumor because it would require a trip to Carmel).

Governor James Whitcomb was purchased by a private collector, however, which may be the reason why he is back on the market today, along with Governor Noah Noble. As reported in the 1957 book, Governor Whitcomb was acquired in 1948 by Dr. Dewitt Brown, a prominent psychiatrist with a home in New Augusta. While James Whitcomb’s whereabouts for the past 60 years are unknown, both he and Noah Noble were carted to White River Salvage a few years ago by a man who owned a tree service and got them in exchange for trimming some trees. Doc Keys of White River Salvage purchased the medallions, and is now offering them on ebay for $8,356 each. Until they sell, however, it’s well worth a trip down to White River Salvage to catch a first-hand glimpse of a piece of the English Hotel. 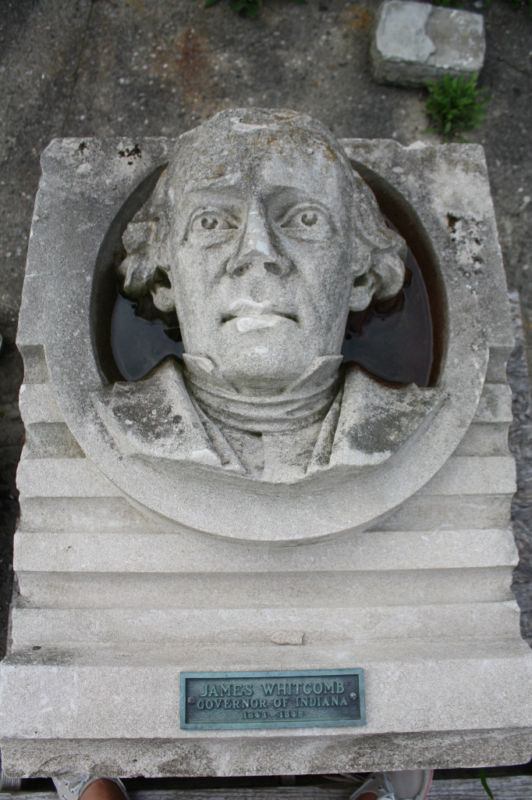 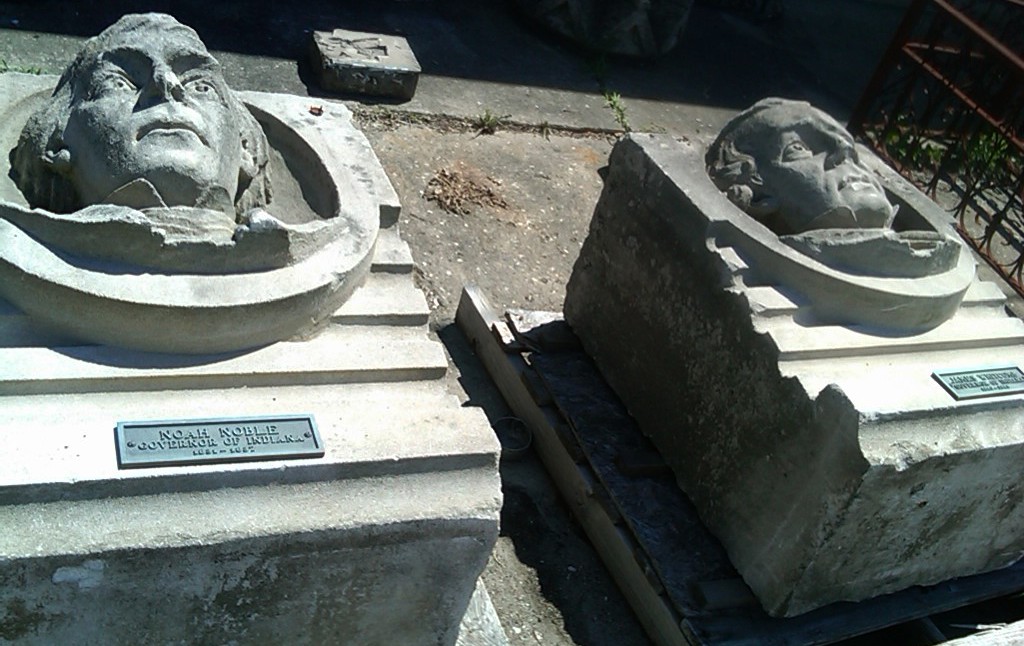 In preparation for writing this article, I’ve been spending a lot of time trying to track down salvage from Indianapolis’ historic hotels and establish its provenance. Because most salvage isn’t labeled, it’s difficult to prove that a particular chandelier or mantle came from a historic hotel–and almost impossible to disprove. However, I finally hit the jackpot at the French Lick Casino.

Since I don’t gamble, it wasn’t the kind of jackpot where I actually won money. Still, as a collector, it was one of those rare occasions where chance and luck just happen to line up perfectly and result in a completely unexpected find.

I was attending a continuing legal education conference two weeks ago in French Lick and was running late to my meeting. On my way to the conference center, I ran into a lawyer from southern Indiana who was headed to the same seminar. In our haste to get to the conference, we did not stop for the usual introductions, so I was pretty surprised to hear someone greet him as “Mr. Claypool”. I asked half-jokingly if he was related to the hotel and was completely floored to learn that not only was he related to Edward Fay Claypool, he also had the bronze signs from the Claypool Hotel and the Claypool Coffee Shop. 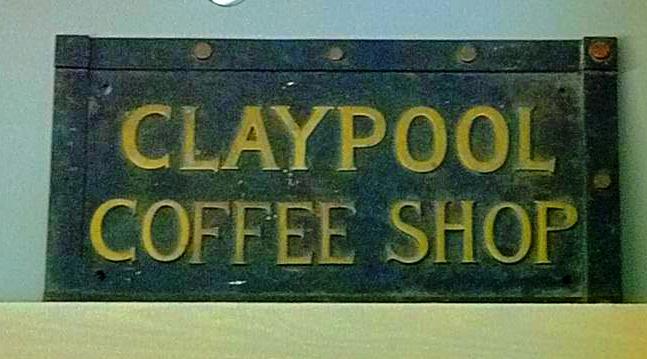 Joe Claypool was 19 years old when the hotel that bore his family’s name was demolished. His great-grandfather, James C. Claypool, was a two-term state legislator whose two terms just happened to be 50 years apart. Edward Fay Claypool was James’ first cousin, and also the namesake for Joe’s father and grandfather, both of whom were named Edward.

Ed Zebrowski personally called Joe’s parents and invited them to the pre-demolition festivities. Joe recalls that he was working that evening and couldn’t attend. The next morning, however, curiosity got the better of him so he drove down to the Claypool to take a look around.

Although many of the fixtures had already been removed from the Claypool, Joe noticed the large metal “Claypool Hotel” and “Claypool Coffee Shop” signs hanging on the exterior. He offered to buy them, but the price was out of range for a college kid, even one with a summer job. So he scavenged some room keys and stationery as mementos and headed out the door. Just he was leaving, however, an auction purchaser arrived who needed help moving some marble. Within a short time, Joe earned enough to purchase the signs. His grown son now has the hotel sign, and the coffee shop sign is displayed in Joe’s home, along with other Claypool memorabilia that has either been passed through the family or given to him by friends. 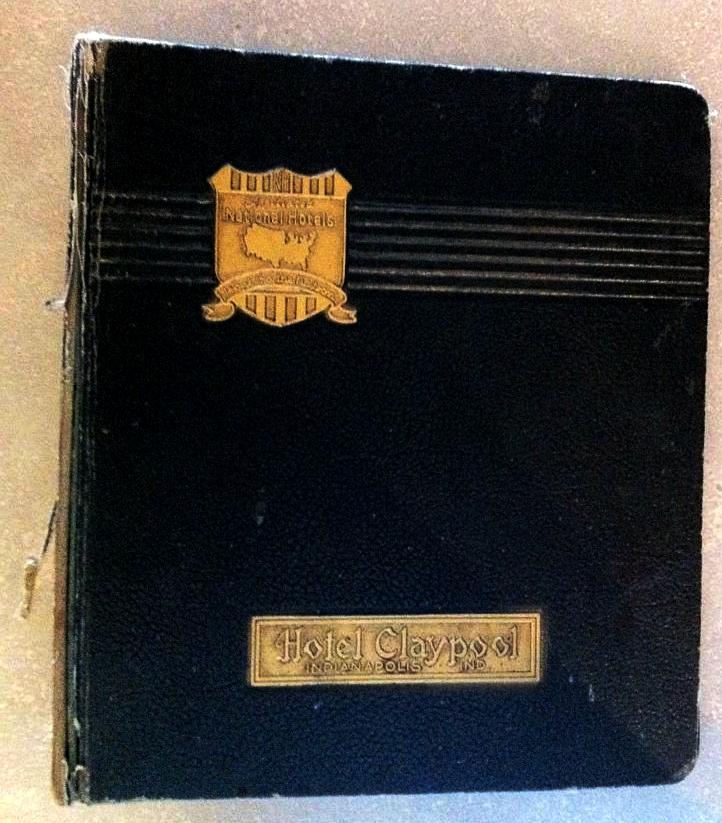 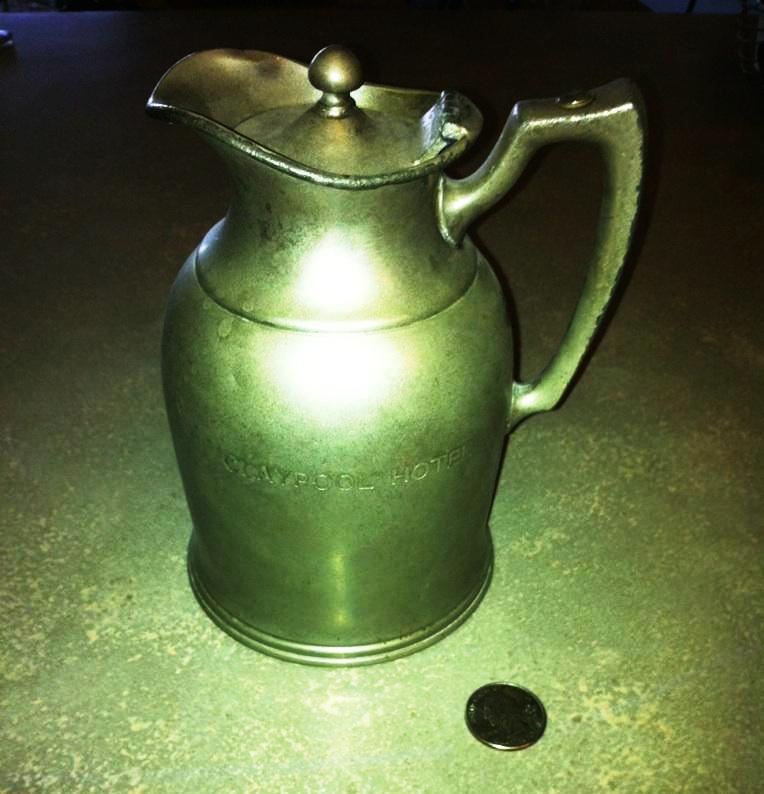 Although the hotels that bear their names are long gone, hotel collectibles remain popular as reminder of the glamour and grandeur of Indianapolis great hotels. Many collectors prize hotel silver such as the Claypool tray pictured below, but I tend to favor more mundane objects that I can actually identify and use. I’ll be writing about the ultimate Indianapolis hotel collectible in a future column, but in the meantime, anyone have a clue how this piece of Claypool silver shared with us by an HI reader may have been used? Or if not, how would you use it today? 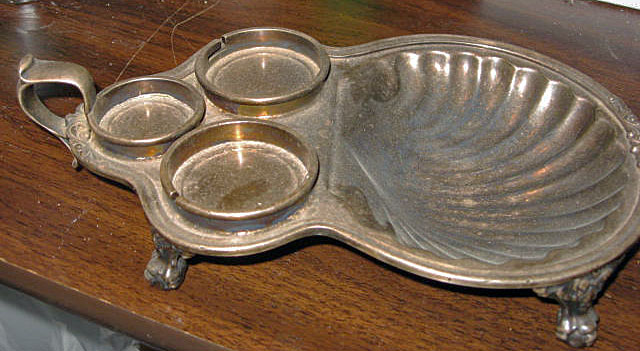 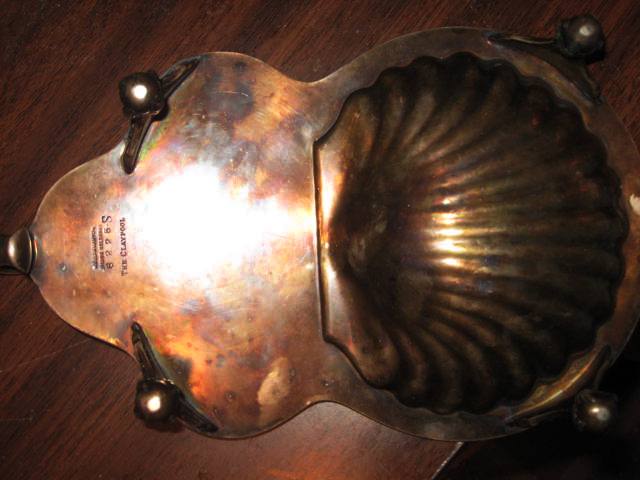