A remarkable sight started cropping up in downtown Indianapolis in the summer of 1903.  “Women Invade Hotel Lobbies,” The Indianapolis Morning Star announced. “Fad Is Becoming Popular and Management of Claypool Encourages It.”

Six years later, however, Mrs. Elizabeth Claypool Earl told a group of influential club women that “[t]he lobby is no place for a woman, but if it is necessary she should not shirk from going there.”

A leader in the suffrage movement and a member of the prominent Claypool clan, Mrs. Earl was not referring to the velvet-swathed lobbies in the city’s most fashionable hotels where women gathered to meet their friends for tea and conversation. Instead, she was steering women away from the lobby of the Statehouse.  In Mrs. Earl’s view, active participation in the legislative process meant exercising influence with personal friends and not “hanging around corners and talking politics or staying in the lobby of the Senate or House and trying to influence the legislators.”

Oh, how times have changed. 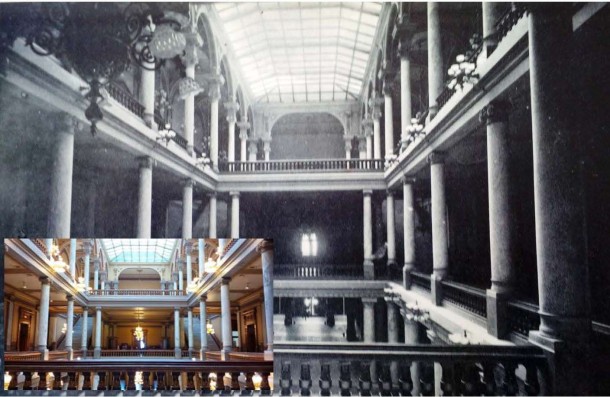 The 3rd floor lobby of the Statehouse as shown in 1906 and in 2013. Although the scene was quiet when I snapped the photo yesterday afternoon, on a typical session day the hallways are thronged with lobbyists waiting to meet with legislators or leaning against the railing as they review bills, talk on cell phones or catch up on email.

I had lunch yesterday with a friend who started her career as a lobbyist in 1980.  At the time, there were a handful of female lobbyists who had been around for years, but the ranks of younger women to join the lobby were so small that she can still remember each of them by name. Sixteen years later, when I “went into the hallway,” as we say in Indiana, following a one-year clerkship at the Statehouse with Judge Patrick Sullivan, male lobbyists still outnumbered women three to one.  Today, the field of lobbying is wide-open to any woman who enjoys public policy and doesn’t mind standing on a marble floor for hours at time in shoes that are generally more attractive but less comfortable than the more sensible footwear selected by her male colleagues.

Although the faces in the lobby have changed over the years, the Statehouse itself remains constant. Save for the absence of spittons, the hallway of the Statehouse yesterday afternoon looked pretty much the same as it did when the building first opened in 1888. 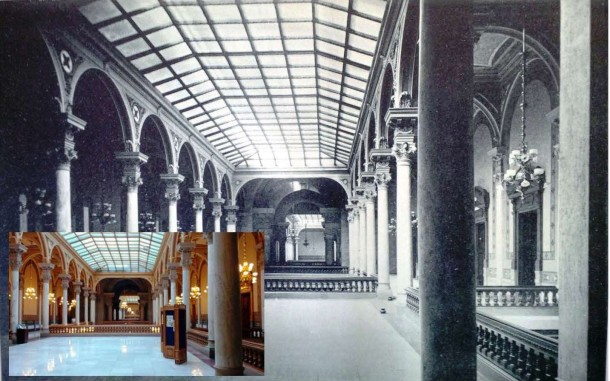 The Statehouse was restored to its original grandeur to celebrate its centennial in 1988. However, the view above looked much different in 1980, following a series of disastrous 20th century “improvements.” The stenciling had been painted over, the original light fixtures had been sold or sent to the junk heap, and a ring of makeshift “press shacks” lined the railings to house the Statehouse press corps.

The other thing that hasn’t changed is the generally low regard that members of the public have for lobbyists.  Perhaps the old adage “Everyone hates Congress but loves their congressman” holds true for lobbyists, as well.  Because everyone has at least one lobbyist. In addition to lobbyists who represent the dreaded “special interests,” there are lobbyists working the halls of the Statehouse to protect the apparently not-so-special interests of old people, young people, taxpayers, school children, nurses, doctors  and even historic preservationists.

The Brevier Legislative Reports, published biennially from 1858 to 1887, are verbatim reports of floor debates at the Statehouse during those years.  Although the term “to lobby” first appeared in print in the United States in 1830, the first mention of the word “lobbyist” by a state lawmaker crops up in Brevier’s on February 18, 1869, when a Sen. Hughes made clear that it was people, and not lobbyists, who persuaded the General Assembly to establish a Normal School in Terre Haute. Hughes was apparently an early adopter of both the word “lobbyist” and the popular view that lobbyists are not actually people, per se.

The word “lobbyist” is next mentioned in February 1871, when the legislature was left without a quorum to conduct business because a number of members had resigned “in hot haste at midnight” to prevent the imposition of a bank tax and an increase in the railroad assessment. In gaveling the 47th General Assembly to a close, the Speaker blamed  lobbyists and others having a pecuniary interest in defeating these bills for urging state lawmakers to commit the “wicked and unpardonable act” of resigning.

Over the next four decades, the number of lobbyists thronging the third floor continued to grow.  In 1911, legislation was finally introduced in the General Assembly to regulate the “profession” of lobbying.  Despite what is presumed to be vigorous lobbying against the measure, in 1915 the legislature passed the first lobby registration law, which required all lobbyists who were paid for their services to register with the Secretary of State and report their expenses. 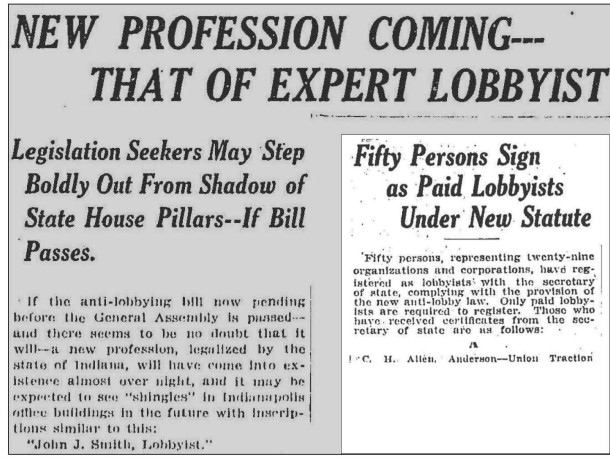 As reported by The Indianapolis Star on February 15, 1915, a total of 50 men representing 29 organizations and corporations registered as lobbyists under the new “Anti-Lobby” law. Although railroad interests dominated the ranks of the first registered lobbyists, other entities who hired lobbyists included the Indiana Society for the Prevention of Tuberculosis, the Anti-Saloon League, and the Indiana State Civic Union, an organization founded to promote moral and social reform.

When the General Assembly convened for its next session in 1917, some lobbyists argued that the registration requirement in the 1915 law was limited to the 1915 session.  Indignant at this attempt to evade the law, then-Secretary of State Ed Jackson staunchly maintained that all paid lobbyists were required to register and successfuly secured an Attorney General’s opinion to support his interpretation of the law.  A lawyer, Jackson would later go on to be elected governor in 1924 with the support of the Ku Klux Klan. Three years later, he was tried on charges of bribery.

In Gallup’s 2012 recent survey of the nation’s most trustworthy professions, only 19% of respondents gave high ratings to lawyers for their honesty and ethical standards as compared to 38% who would apparently trust their lives to chiropractors. Lobbyists don’t even show up, although I suspect they rank well below the 4% “trustworthiness” rating for car salesmen.  Nonetheless, I am proud to say that I am both a lawyer and lobbyist.  As with any profession, there are a few bad apples, but during my 17 years in the hallway the vast majority of legislators, lobbyists and staff who I have had the pleasure to know are honest, hard-working and well-intentioned people who are playing an important role in the democratic process. 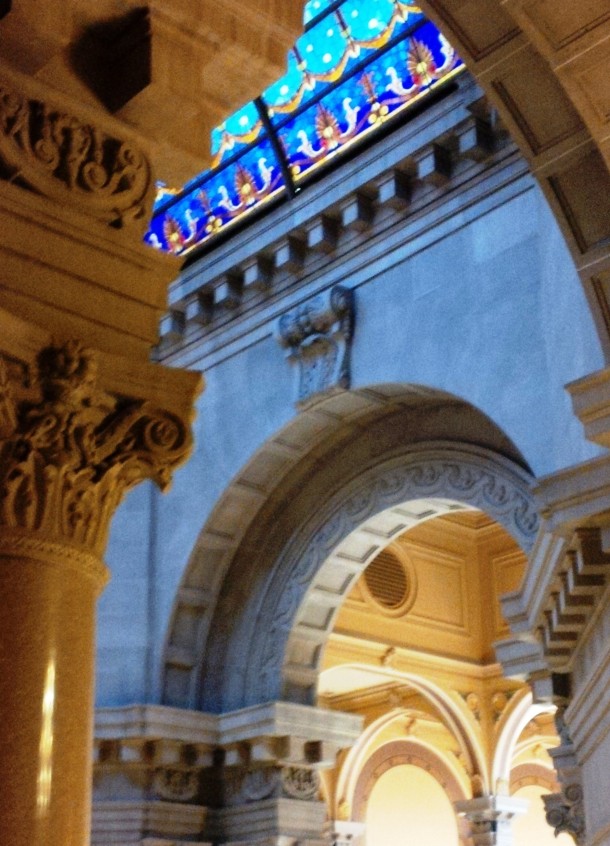 I miss the Statehouse when the legislature is not in session – the frantic pace of committee hearings, the camaradarie of long-time colleagues, and the cool, quiet dignity of the marble hallways. Say what you will about lobbyists, but the odds are the view from our temporary “offices” in the hallway beats anything you can see from your desk.

Over the years, I have filled my law office with antique Statehouse souvenirs to remind me of the place where I have spent some of the most frustrating, exhilarating, exhausting and gratifying days of my professional life. Souvenirs have fallen out of favor in recent years, but a century ago a family visiting Indianapolis might have taken home the Statehouse trinket box where I keep my paper clips or the mug that holds my yellow highlighters. 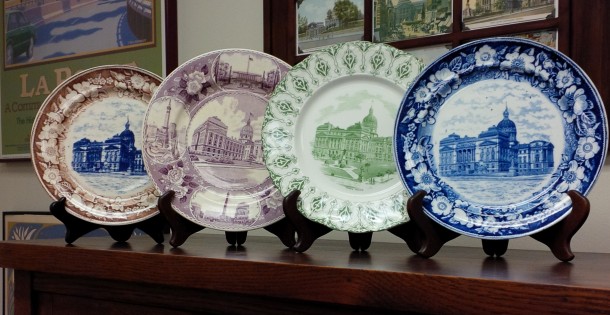 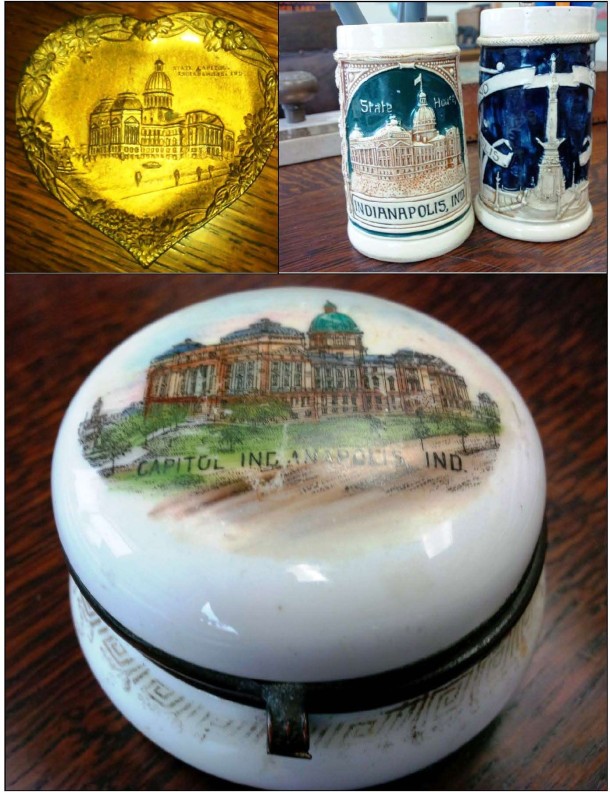 When the 2013 General Assembly adjourned two weeks ago today, I was among the relatively small group of lobbyists who stayed until the final gavel fell.  As I headed toward the stairs that evening, I snapped a final picture of the place that had been my home away from home for the past four months. It was 1:38 a.m., and I felt and probably looked at least 20 years older than I had when the session started in January. But our Statehouse – the people’s house – looked as beautiful as it did when the doors first opened in 1888.

If these halls could talk… 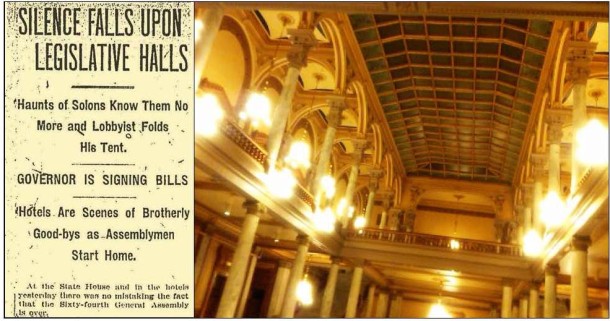