“There I grew up” is how Abraham Lincoln described his childhood home, a humble log cabin in southern Indiana. But it’s also how one area woman can describe an 11th floor apartment at the Hotel Lincoln, an Indianapolis high-rise that bore the late president’s name.

Georgiana Rupprecht Schroeder – known as Georgi to her friends – was only three months old in 1931 when she moved to the Hotel Lincoln with her parents.  She remained there until her marriage in 1955.  In between, she was a Hoosier version of Eloise, the fictional six-year-old girl who lived in the Plaza Hotel in New York city.

Pictured above left is the entrance to the Hotel Lincoln, which stood at the intersection of West Washington Street and Kentucky Avenue from 1918 to 1973. Shown right is the entrance to Plaza, the iconic New York hotel that was home to Eloise, a fictional 6-year-old brat who lived in the Plaza's penthouse and ordered all of her meals from room service.

The Hotel Lincoln was still relatively new when Schroeder’s father, Paul Rupprecht, Sr., took over as manager.  The brainchild of banker Albert E. Metzger and architects Preston Rubush and Edgar Hunter, the Lincoln had been on the drawing board for more than a decade as the trio waited patiently for the right opportunity to build a hotel specially designed to cater to the growing number of business travelers passing through the “”Crossroads of America.”

In the early 1900s, Metzger – in partnership with Rubush & Hunter – had taken a renewable 99-year lease on the property at the prominent intersection of Kentucky Avenue and Washington Street from the estate of Magadelena Maus, the widow of brewer Casper Maus.  After acquiring some adjacent land fronting Kentucky Avenue,  they decided in 1917 to finally cash in on the area’s commercial growth and redevelop the site into a new hotel. The 8-story building would be called the Lincoln, in honor of the president who stood across the street in February 1861 and delivered a famous speech from the balcony of the Bates House. 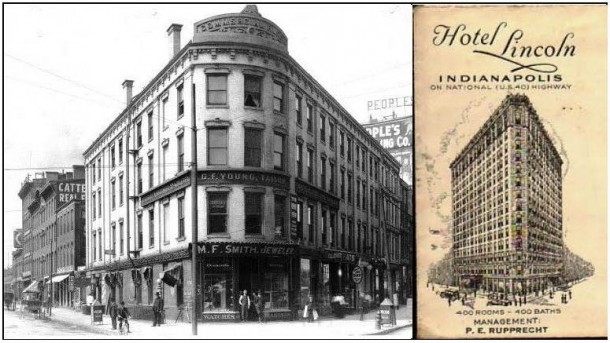 The four-story Commercial Block, above left, was demolished in 1917 to make way for the new Hotel Lincoln. Paul Rupprecht managed the Lincoln from the early 1930s until it was purchased by Gotham Hotels in the mid-1960s.

The Lincoln opened to rave reviews on June 29, 1918. According to The Indianapolis Star, “exquisite pieces of work in bas relief” in a shade of delicate blue adorned the lobby and mezzanine area. The finely-molded plaques on the pillars and ceiling were of “considerable size,” and appeared to show figures that could have been Egyptian or Greek, although the reporter who covered the grand opening admitted that he was “not too well informed on such things.”

One month after the Lincoln opened its doors, the owners announced that the size of the hotel would be doubled to 16 stories. The expanded building would be topped with an elegant marble dining room and formal lobby designed in the “Venetian style.” Although the plans were eventually scaled back to 14 floors, the Lincoln still holds its place in history as the tallest flatiron building ever built in Indianapolis. Construction was completed in 1921, and on  New Year’s Eve 1921, the 14th floor Travertine Room opened its doors to revelers. 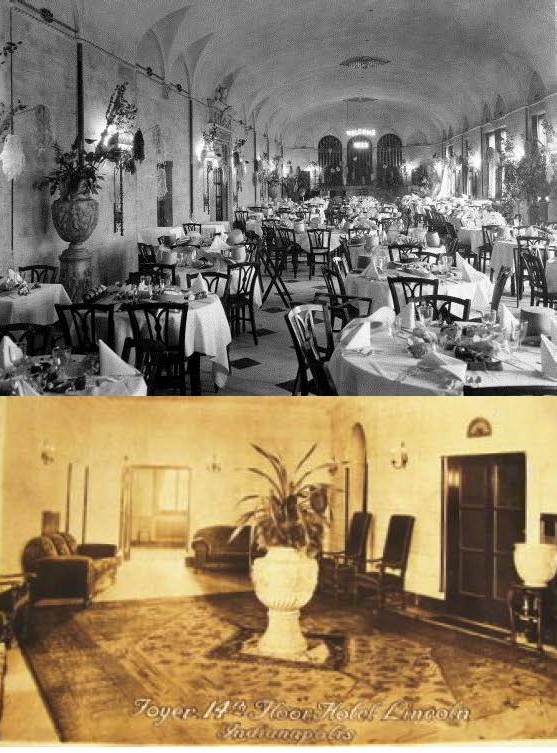 The marble-clad Travertine Room opened its doors to New Year's Eve revelers in 1921. Dinner was served at 10 p.m., with dancing to follow until 1 a.m. The neon sign at the front reads "Welcome 1922."

Although it has been 40 years since Schroeder last saw her childhood home,  her memories of life in the Lincoln are still vivid. From her family’s two-bedroom apartment on the 11th floor, she could hear the strains of the Estey pipe organ that had been specially built for the Travertine Room. When the windows were open, she could smell the stench from the massive Kingan meatpacking plant a few blocks west on Washington Street.  But the highlight of her life at the Lincoln was her wedding on April 30, 1955.

While a wedding reception at the bride’s home usually means a quiet affair with a small circle of friends and family, Schroeder had the advantage of living in one of the best hotels in Indianapolis.  Her reception was held in the elegant Travertine Room, and out-of-town friends and family stayed in more than 30 rooms provided by her father. “Fortunately the hotel was air conditioned by then,” Schroeder recalled, “but actually it was a perfect day.” 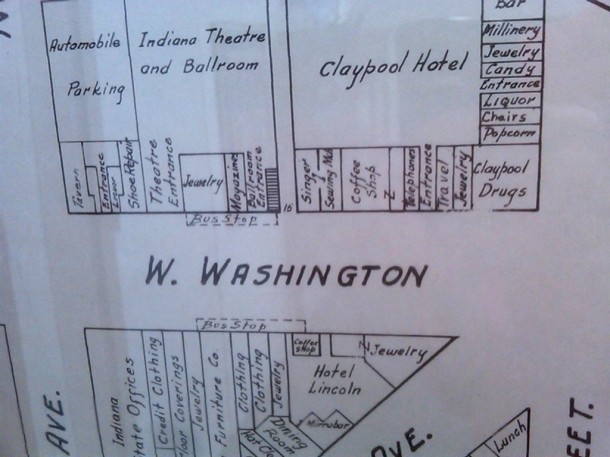 This section of a downtown real estate map shows how the Hotel Lincoln and adjacent properties were situated around the time of Georgi Schroeder's wedding in 1955. The north-south street on the right is Illinois; Capitol Avenue is on the left.

I connected with Schroeder completely through happenstance last weekend. While researching my most recent HI article on the pioneer legislature, I ran across the original 1828 law establishing Indiana University.  I posted a photo of the law on J.T. Forbes’ Facebook page. Forbes is the executive director and CEO of the IU Alumni Association. Shortly thereafter, I got a Facebook message from one of Forbes’ Facebook friends, Andrew Potts, a Washington DC attorney who grew up in Indianapolis and is also an avid collector of “old” Indianapolis.  I was thrilled to find another collector because I was planning to write about the Hotel Lincoln this week and was looking for interesting memorabilia from the old hotel.

Although Potts didn’t have any Hotel Lincoln souvenirs or memorabilia, he did have the phone number and email address for a family friend who just happened to grow up in the Lincoln.  Having the opportunity to talk to Georgi Schroeder and share her living history is – in my view – about 1,000 times more interesting than writing about another old teapot anyway.

As a child growing up in Kokomo, I was fascinated by the Eloise stories. Originally published in 1955 – the last year that Schroeder lived in the Lincoln — the first Eloise book told the tale of a bratty six-year-old child who lived in the penthouse of the Plaza Hotel with her nameless nanny and frequently absent mother.  Eloise charged all of her meals to room service, eatings delicacies such as Planked Medallion of Beef Tenderloin with Fresh Vegetable Maison.

The Rupprecht’s apartment lacked a kitchen, so whenever Schroeder and her family decided to dine in, they also ordered from room service. But Schroeder made clear that she was no Eloise. Room service meals for her and her younger brother were ordered by her mother, although sometimes Schroeder ate alone in the hotel’s restaurant or coffee shop when her parents were out for the evening.  However, the Mirabar – the Lincoln’s Art Moderne lounge — was strictly off limits. 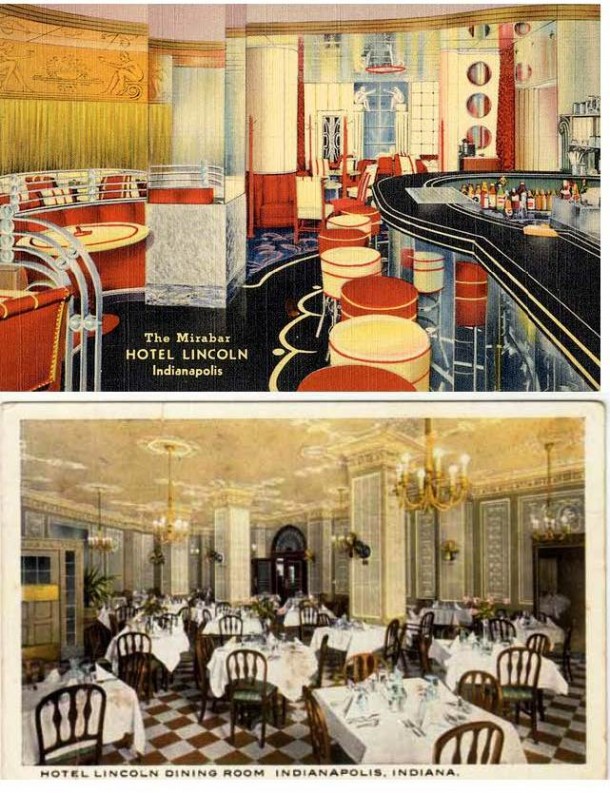 Nor were the Rupprecht children permitted to engage in the same sort of antics as Eloise, such as pouring water down the mail shaft or ordering a single raisin from room service. The Lincoln’s owners didn’t want children running around the hotel, so Schroeder and her brother were tasked with being on their best behavior while using the elevators and other public spaces in their own “home.”

During the 1930s and 1940s, there wasn’t really any place downtown for the Rupprecht children to play outside, so they spent a lot of time after school and in the summers at their grandparents’ house in Woodruff Place. Their mother usually made them ride the back elevator if they were dirty after playing outside because grass-stained, muddy children were not tolerated in fancy hotels back in those days. If they were really dirty, however, Schroeder and her brother cleaned up and changed clothes before taking the streetcar back to the Lincoln.

During her 20+ years at the Lincoln, Schroeder became friends with a couple of other girls who lived in the “neighborhood.” One girl’s father managed the Hotel Washington, and the other’s managed the Severin.  Schroeder was not permitted to walk alone to visit her friend at the Severin because the route passed by several third-rate hotels, including the Lorraine, which was opposite the Statehouse on the corner of Washington and Capitol. 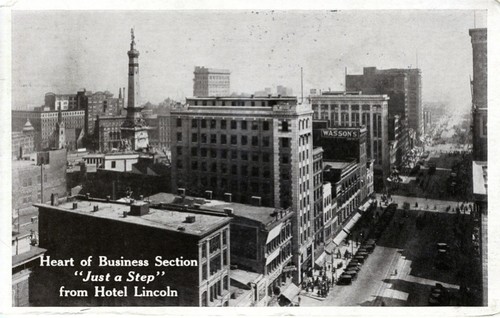 The Lincoln primarily catered to business travelers, with generous-sized Sample Rooms where salesmen could sleep at night on a Murphy bed and then show their wares by day.  However, it was also a popular site for conventions, and during WWII, was packed with soldiers from nearby Camp Atterbury and their families.

Schroeder recalls that during the hectic war years, her father never took a vacation. And he was facing his own battle on the home front, after enemies invaded the Lincoln in the form of bedbugs carried in by traveling soldiers. Victory over the pests proved elusive, despite the advances in modern chemical warfare. At one point a desperate Rupprecht resorted to a home remedy suggested by one of the maids.  Although the infested rooms were usually off-limits to guests when they were being treated, the room shortage in the city was so severe that one guest insisted on staying there anyway despite the awful smell of the homemade concoction. He apparently survived the experience, although his companion bedbugs were not as fortunate.

The Lincoln was purchased by the Sheraton Hotel chain in 1955 and renamed the Sheraton-Lincoln.  It was sold again in 1968 to Gotham Hotels, which launched an ambituous overhaul of the aging hotel. Two years later with renovation only 25% complete, Gotham decided to shut down the Lincoln.  The building’s few remaining tenants, including the State Democrat Party, were given three days to vacate. For the next three years, the Lincoln sat vacant.

Schroeder and her family paid a final visit to the Lincoln after the hotel had been empty for a couple of years.  They were surprised when they were allowed to enter the building, which was dark and dank with plaster falling everywhere. After a brief look around, they quickly left. That was the last time Schroeder ever saw her childhood home.

The Hotel Lincoln was imploded with 300 sticks of dynamite in the early morning hours of Sunday, April 9, 1973.  In the short span of 10 seconds, the 55-year old building was reduced to a pile of rubble.  Schroeder was teaching Sunday school that morning and missed the implosion.  She was surprised when I told her that a video of the implosion was available on YouTube, but didn’t seem especially to eager to watch it.  I can’t say I blame her. 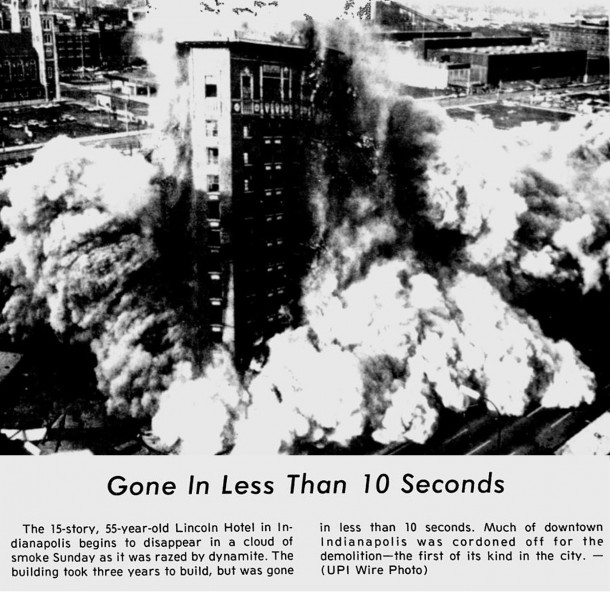 If you’d like to learn more about the Hotel Lincoln or see the video of the implosion, check out Joan Hostetler’s Then & Now article from 2011.