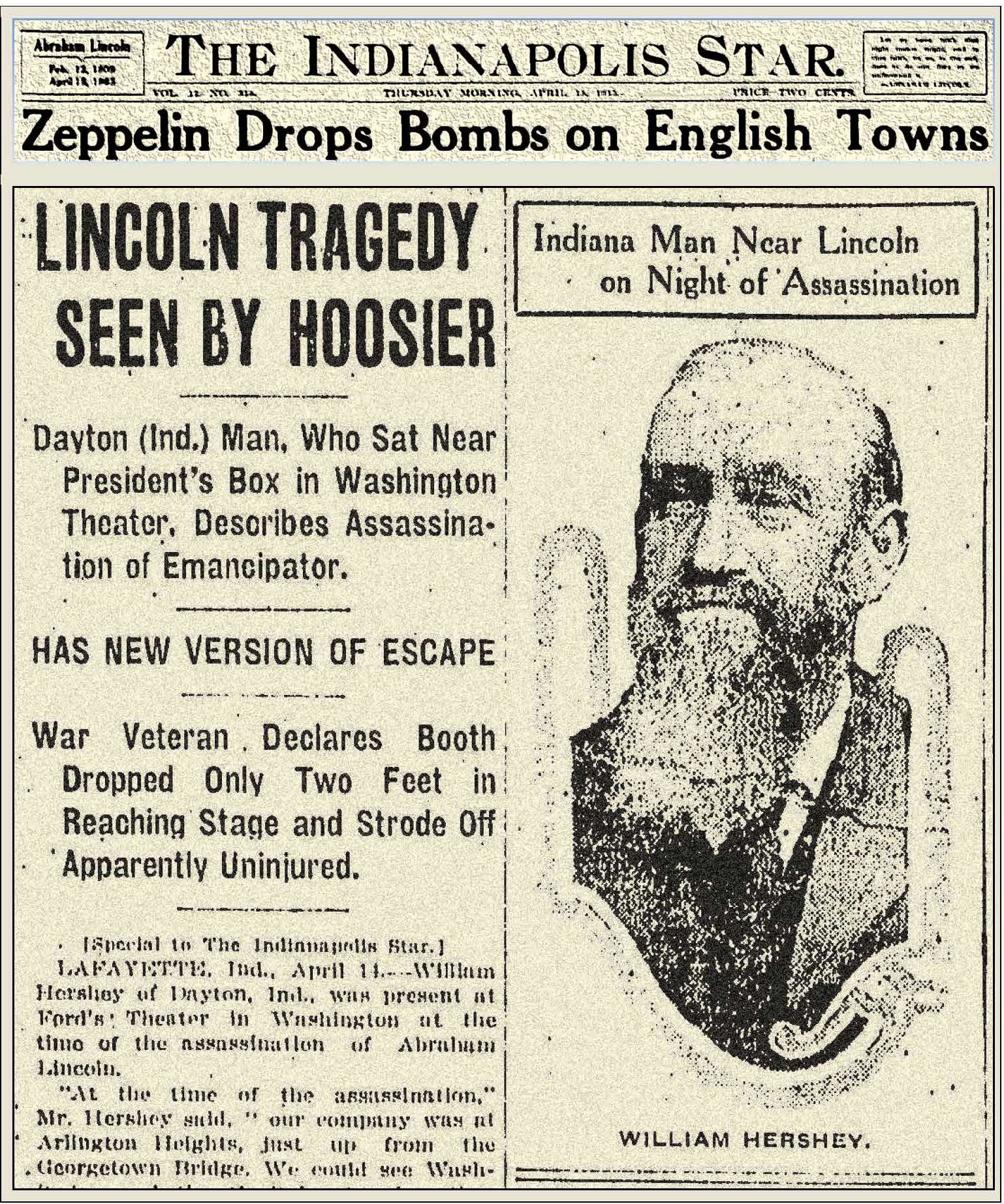 When Abraham Lincoln stopped in Indianapolis on his way to his first inauguration in 1861, he was carried from the train to the Bates House in a barouche drawn by a team of white horses.  The President-elect complimented the driver, Elijah Hedges, on the beauty of the plumed and decorated horses. 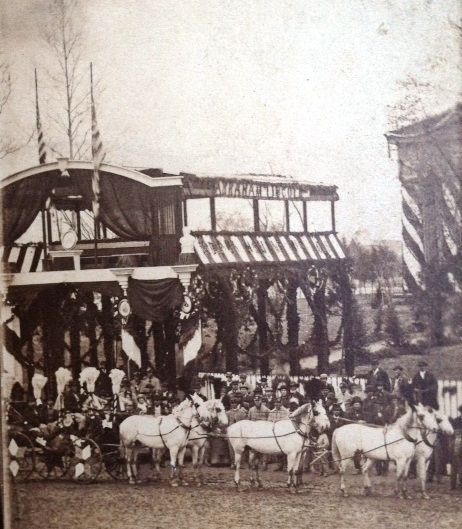 The team of horses as they would have appeared arriving at the Statehouse on April 30, 1865. Because there was a torrential downpour on the day that Lincoln’s funeral train arrived in Indianapolis, this photo was staged the following day. Photo courtesy of David Yount.

The recent media frenzy surrounding the 50th anniversary of the Kennedy assassination got me to wondering what local readers saw when they opened up The Indianapolis Star on April 15, 1915.  That was a significant date in our nation’s history because — to use the parlance of the late Abraham Lincoln– exactly two score and 10 years had passed since the former President was felled by an assassin’s bullet at Ford’s Theatre.

While few – if any – witnesses to an historic event will still be alive to mark its centennial,  50th anniversaries are different. Based on  U.S. Census data, at least 10 million Americans who were old enough to comprehend the tragic events of April 15, 1865 were still around a half century later to tell the story of where they were and what they were doing when they learned that President Lincoln was dead.  And at least three of these individuals were prominent Hoosiers who claimed they helped carry the wounded president from the theater, although strangely none seemed to recall the others’ presence. 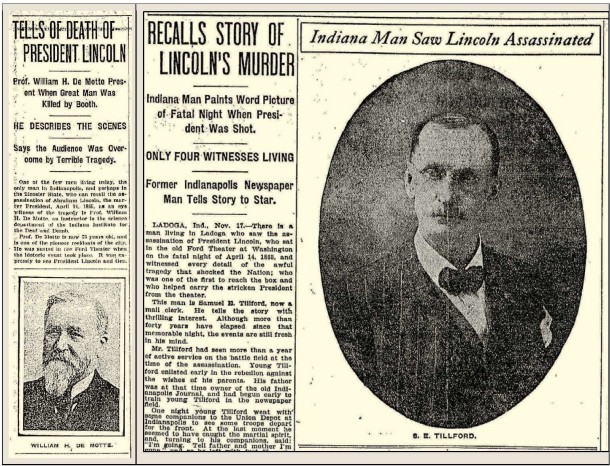 The most sensational account was related by Samuel E. Tilford, a mail clerk from Ladoga, Indiana who by 1906 was reported to be one of only four persons still alive to personally witness the assassination. Tilford grew up in Indianapolis and worked for a time at The Indianapolis Journal, which was owned by his father.  He was seated near Lincoln on the fateful evening and maintained that he was one of the first persons to rush to President’s box after the shooting.  “By the time we had carried the President to the house across the street, things were in a complete uproar,” Tilford told The Indianapolis Star on November 18, 1906. 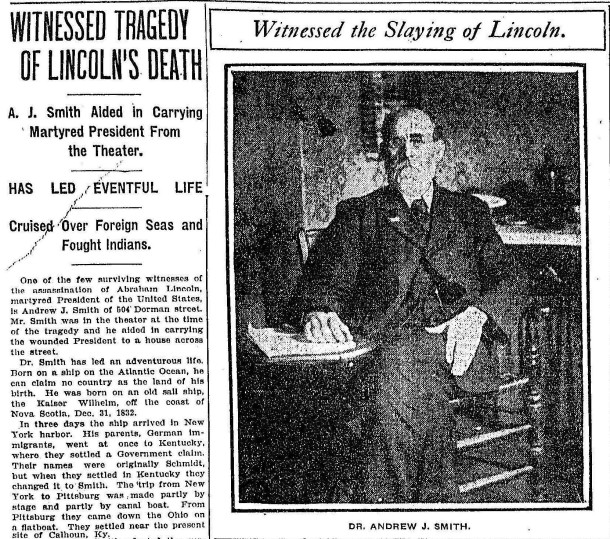 Tilford’s place in history was challenged the following week, when local physician Andrew J. Smith of 504 Dorman Street stepped forward and claimed that he helped carry the injured president to the house across the street.   This was just one of many interesting events in Smith’s storied life, however, which read like an adventure novel and included two near brushes with his own death.

The first occurred in 1861, when Smith narrowly escaped lynching after he made the strategic mistake of tearing up a Confederate flag in front of a mob of Confederate soldiers.  Smith was hung by a rope from a tree and had almost lost consciousness when his cousin fired a pistol into the crowd and aided in his escape.  Smith later joined the Union army, and was wounded so gravely at the battle of Stone River that he was believed to be dead.

As the grave diggers were preparing to lower his body into the ground, Smith recovered sufficiently to mutter the words “Jesus Christ.” He was taken to a hospital and was convalescing  from his wounds in Washington, D.C. when he witnessed the assassination.  Smith moved to Indianapolis after the war, where he practiced medicine until his death in October 1915. 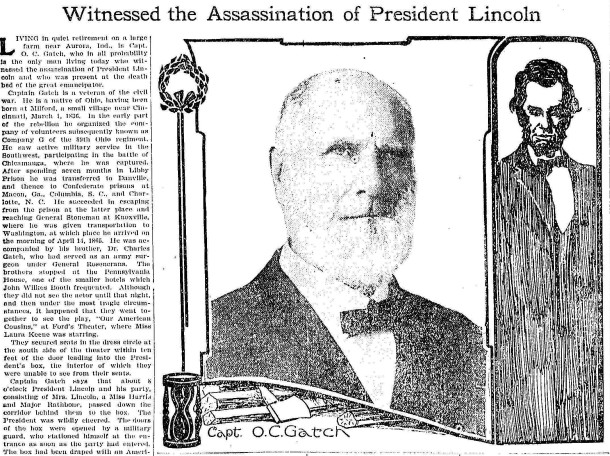 A few months later, a third Hoosier surfaced who, according to the Star, also helped carry Lincoln from the theater. Captain O.C. Gatch was retired and living on a farm in Aurora, Indiana when he told the Star in 1907 that he and his brother were seated 10 feet from the President’s box at Ford’s Theatre on April 14, 1865.  Recognizing Gatch as a Union solder, a guard rushed over and asked for assistance, whispering that the President had been shot.

The first sight that greeted Gatch as he entered the President’s box was actress Laura Keene, spattered in blood and wringing her hands in distress. He then spied the wounded President lying back in his seat, his face marked by “the pallor of death.”  One of the President’s guests, Major Henry Rathbone, asked Gatch if he knew of a nearby physician. Gatch summoned his brother, a U.S. Army surgeon.

“Going behind the chair of the death-stricken President, [my brother] placed his hand on the back of Lincoln’s head,” Gatch told the Star. “He at once felt the bullet hole, blood filled his hand, and he intimated that the President was in effect dead.”  Gatch and his brother then assisted Rathbone and a guard in carrying Lincoln to a boarding house across the street, where they remained by his side until the President’s death the following morning.

Gatch’s incredible story is backed up, at least in part, by a New York Times story from April 15, 1865 that reported Dr. C.D. Gatch was one of four physicians with Lincoln when he died.  However,  Dr. Charles Leale is generally believed to have been the first physician to see Lincoln’s wounds. In fact, researchers last year with the Abraham Lincoln Presidential Library discovered a 21-page manuscript written by Leale just hours after Lincoln’s death. Leale wrote that he examined Lincoln’s wound as Mrs. Lincoln repeatedly exclaimed ” “O doctor, do what you can for him, do what you can!”  Leale’s report was found with the Surgeon General’s papers in the National Archives in Washington, D.C. 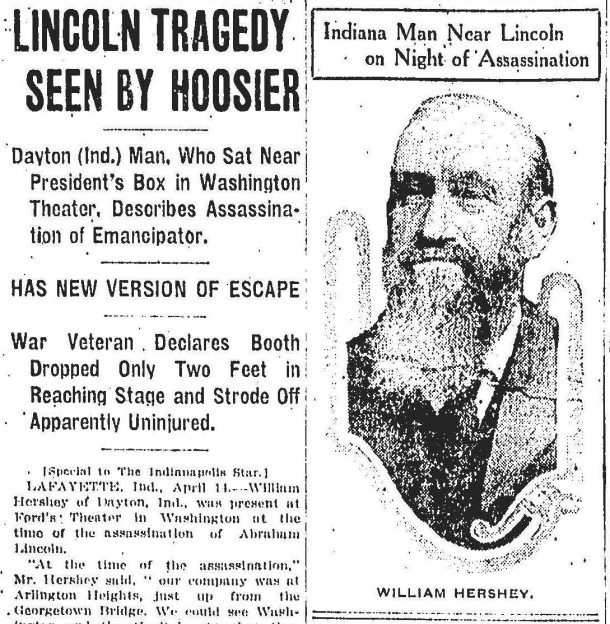 In the early years of the 20th century, several other Hoosiers recounted their memories of witnessing the assassination.  Professor William H. DeMotte, an instructor at the Indiana School for the Deaf and Dumb, was seated so close to the path of the men who carried Lincoln from the theater that he could have “dipped [his] hands in the martyr’s blood,”  according to a January 1906 report in The Indianapolis Star.

DeMotte happened to be in D.C. on the evening of the shooting because he was serving as the military and sanitary agent for the state of Indiana, a role that included looking after the needs of disabled soldiers.  As a result of his government post, he was reportedly one of the few people who were permitted to see the body of the President at the White House after his death.

Another Indianapolis resident, Gabriel Cowgill of 723 East 29th Street, was described by the Star in February 1909 as an “unassuming citizen” who “knew Lincoln, was in Ford’s Theatre was he was shot, participated in his second inauguration and in pursuit of the assassination Booth, and stood guard at the head of the martyred President’s coffin in the Rotunda of the Capitol Building and in the room where Mrs. Suratt was prisoner and from where she was led to the scaffold to pay the penalty for her connection to the assassination plot.” 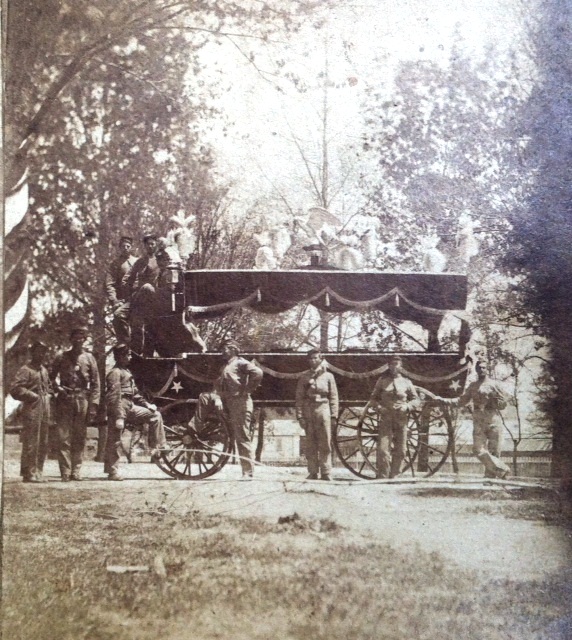 Photo of the funeral hearse that carried Lincoln’s body from the train station to the Statehouse on April 30, 1865. One of the eagles from the hearse is on permanent display at the Columbia Club. Photo courtesy of David Yount.

But then later in 1909, another Indiana witness to the assassination surfaced who made an astounding claim. “I did not help carry the President to the little cottage across the street where he died,” Dayton, Indiana resident William Hershey told The Indianapolis Star. “Within the last two years, I have read of seven different men who claimed that honor.”

Hershey said the President was carried out of the theater on a stretcher by six men in uniform. “There was a guard of soldiers with muskets, and they had to use the butts of their guns to keep the crowd back.”

Hershey’s tale was the only eyewitness account featured in the Star on the 50th anniversary of Lincoln’s death.  Tilford had since backed away from his claim that he helped carry Lincoln on a stretcher after one of his theater companions told a different story. 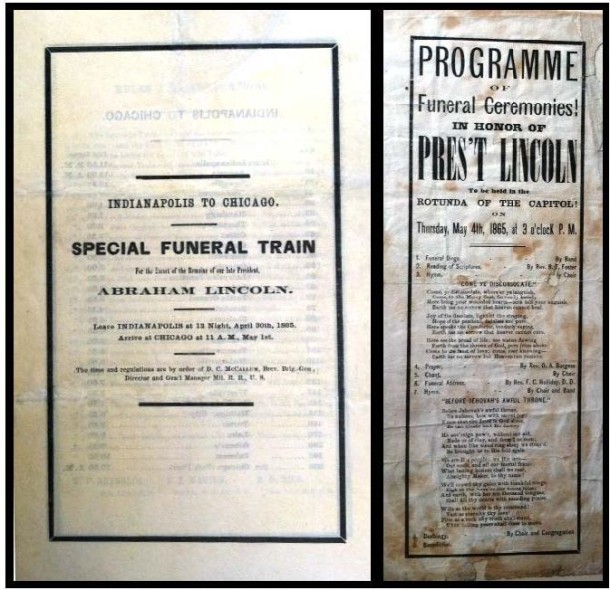 Pictured above is a schedule of stops for the train that bore Lincoln’s body from Indianapolis to Chicago. From early morning until 11 p.m. on April 30, 1865, Lincoln’s body lay in the state in the rotunda of the old capitol as thousands of rain-soaked mourners filed by. Two days later, a funeral service was held in rotunda, with local ministers officiating. (From the collection of David Yount) 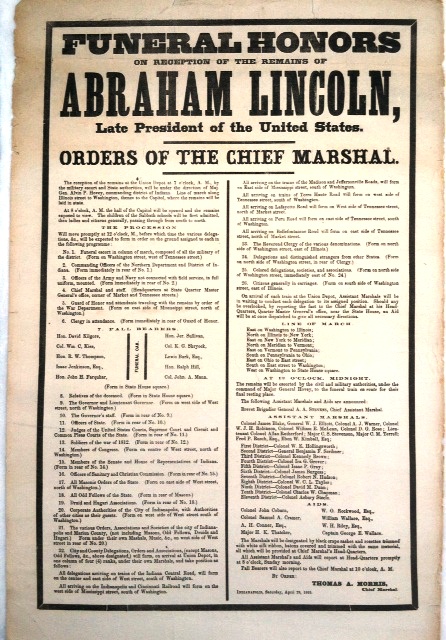 A handbill outlines the order of the procession that was planned to honor the slain President as his body was transported through the streets of Indianapolis on the morning of April 30, 1865. Due to a torrential downpour, however, the outdoor procession and ceremonies were severely curtailed. (From the collection of David Yount)