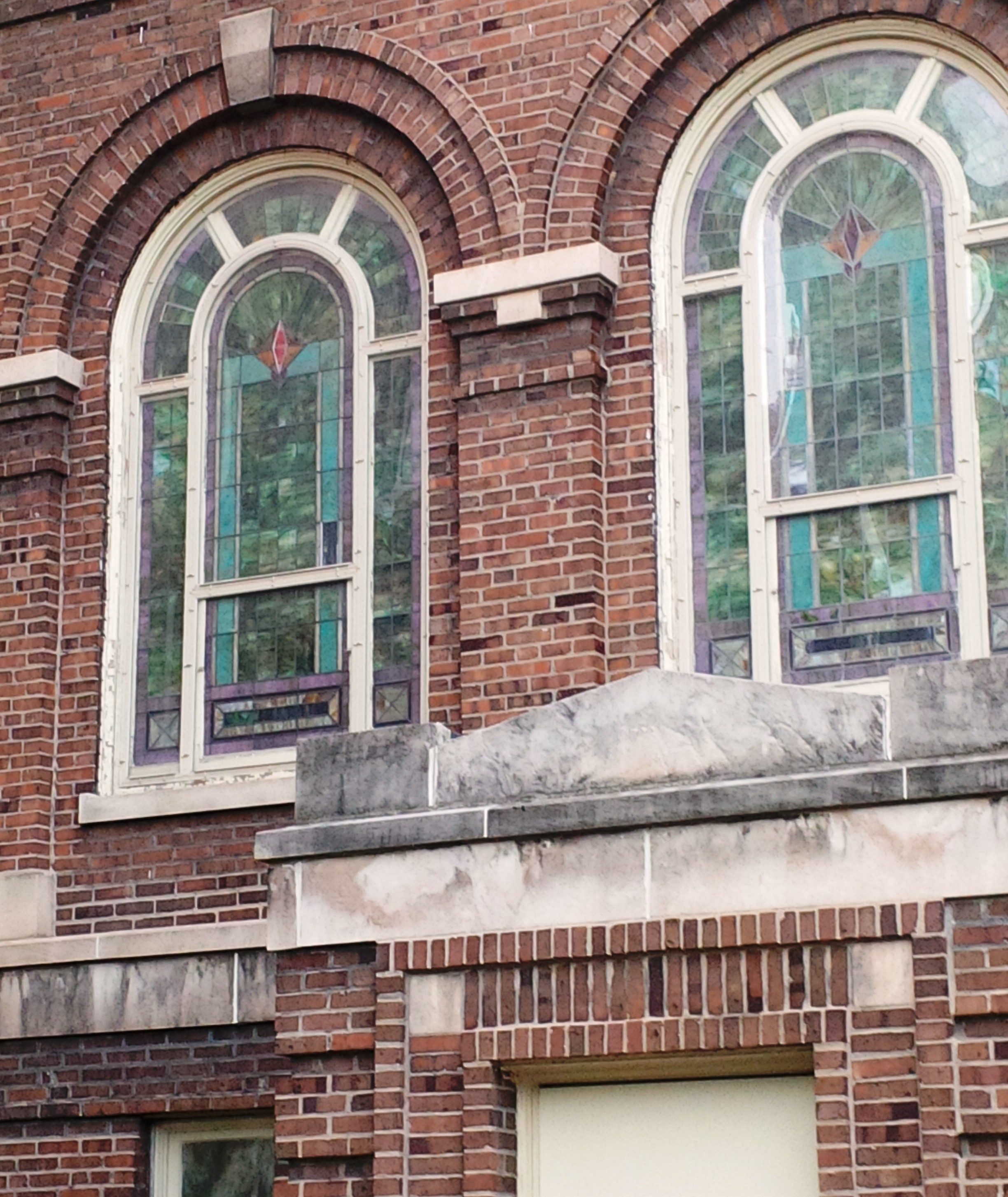 The recent death of Lauren Bacall brought to mind the movie magic she made over the course of four films with Humphrey Bogart, her co-star and real-life husband. But while Bacall may have had Bogey’s love to herself when the cameras were turned off, she was not the only woman to capture his heart on the big screen.

In The African Queen, Bogart and Katharine Hepburn charmed audiences with the unlikely romance between a middle-aged spinster and a codgy boat captain who takes her on a danger-filled trip down the Congo.  Bogart won the Oscar for his performance as Charlie Allnut, and Hepburn was nominated for her portrayal of Rose Sayer, a Methodist missionary stationed in German East Africa in 1914.

Had Rose Sayer been a real person, there’s a good chance that she would have studied at the College of Missions in Irvington before she ever assumed her missionary position. 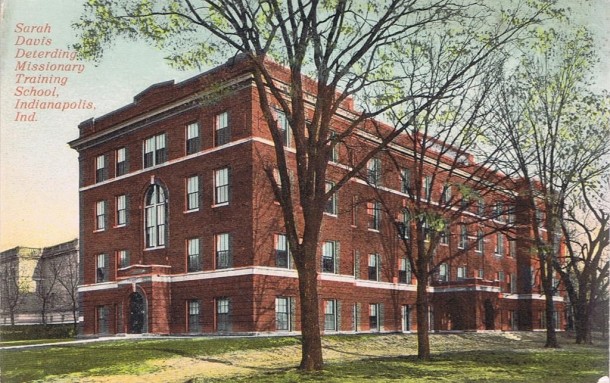 In 1910, the Christian Woman’s Board of Missions opened the Sarah Davis Deterding Missionary Training School in a three-story brick building on University Avenue in Irvington.  Two years later, it was renamed the College of Missions to reflect its stature as the only missionary training school in the United States to provide graduate-level classes for missionary students.

Throughout its 18-year run in Irvington, the College of Missions was closely affiliated with Butler University.  Credits were interchangeable between the neighboring institutions, and Butler students who sought to learn a foreign language other than German or French could enroll in the College of Missions and take classes in Spanish or Portuguese, as well as Chinese, Hindi, Japanese, Tibetan and Urdu. Courses were also offered in international law, medicine, sociology, and religions of the world.

Because teaching was an important component of missionary work, the college even housed an on-site kindergarten to help prepare the missionary students to provide early childhood education to four- and five-year olds in faraway foreign lands. 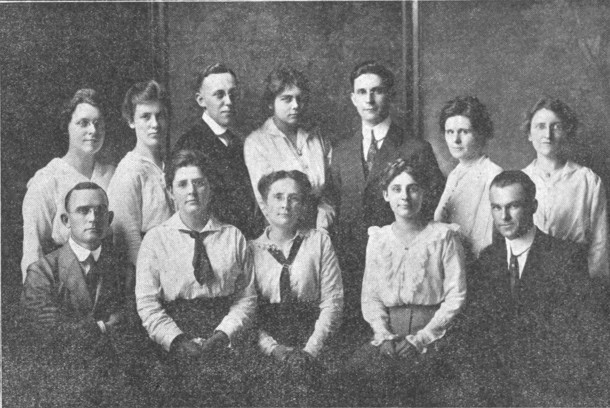 Athough the College of Missions was operated under the umbrella of the Disciples of Christ, it trained missionaries from all Christian denominations and from all parts of the world.  Around 300 missionaries were graduated from the college during its time in Irvington, in classes of 15-20 students.  Immediately upon graduation, most of the new missionaries were dispatched to such far-flung places as Argentina, India, Liberia, Mexico, China, and the Belgian Congo. Some stayed closer to home, however, to fill the need for missionaries in remote Appalachian communities and in burgeoning U.S. immigrant centers. Below is a cloth map from around 1915 that shows the various outposts where College of Missions graduates were stationed. 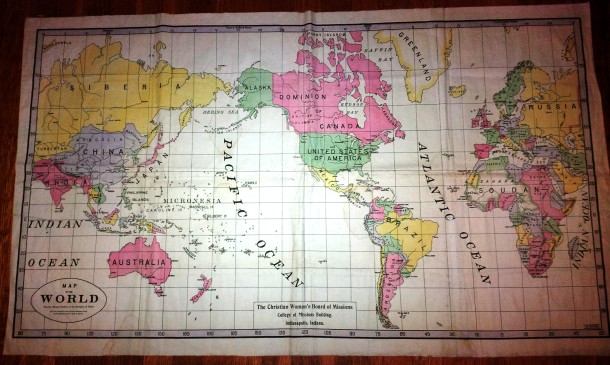 I found the cloth map some years ago in a pile of fabric scraps at a flea market. Although I didn’t know anything about the College of Missions, one hint to the map’s age was the appearance of the name “Petrograd.” In 1914, the Russian city of St. Petersburg was renamed Petrograd. 10 years later, the city’s name was changed to Leningrad. (Click photo to enlarge)

At the same time the College of Missions was exporting its graduates to remote outposts, it also imported dozens of highly-regarded missionaries from foreign lands to serve as professors, many of whom ended up making Irvington their home.  One such missionary was the Rev. David Orville Cunningham, who was known to natives in India as “The Fearless Hunter.”

According to Cunningham’s 1922 obituary in The Indianapolis Star, the former missionary-turned-professor earned his nickname in India when he killed an enormous tiger that had been terrorizing the farms and villages.  Although several hundred villagers were participating in the hunt, Cunningham saw that the tiger was escaping through the undergrowth and dropped 35 feet to the ground so he could confront the beast head-on. A single shot from his rifle felled the tiger, which at the time was believed to be the largest ever seen in the area.  The 8-foot-long skin was mounted as a floor rug in Cunningham’s home at 261 Downey Avenue. 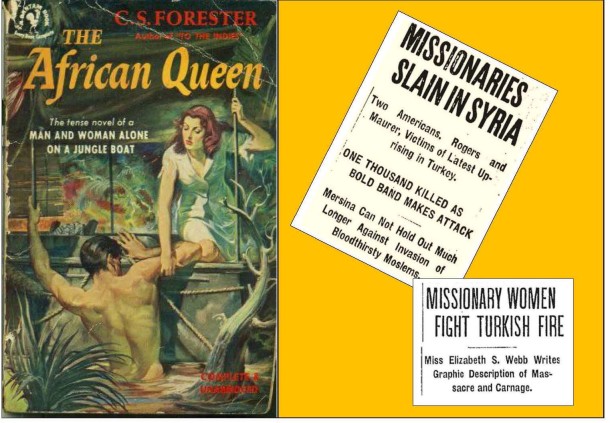 Although the 1935 book that served as the basis for the Oscar-winning film was touted as “The tense novel of A MAN AND WOMAN ALONE ON A JUNGLE BOAT,” real-world missionary work was more about jungle diseases than love in the jungle.   Missionary work could be treacherous, with some missionaries facing militant mobs and political upheaval, as well as wild animals and inhospitable weather.  Even the cast and crew of The African Queen endured frequent bouts of gastro-intestinal distress, with Katharine Hepburn reportedly spending much of her off-screen time with her head in a bucket.

Yet love did flourish among the missionaries. In June 1913, the Star reported that two graduating students were wed in the college’s chapel and two more couples were engaged to be married upon completion of their studies.  As described in the article, the bride – a Miss Lillian Pruefrock from Clarence, N.Y. – was “radiant in her bridal robe of filmy white chiffon, fashioned over an exquisite robe of embroidered Japanese silk … and draped and caught with clusters of tiny roses.” Shortly thereafter, the bride would pack up her wedding costume and sail with her new husband to their new life in the Belgian Congo. 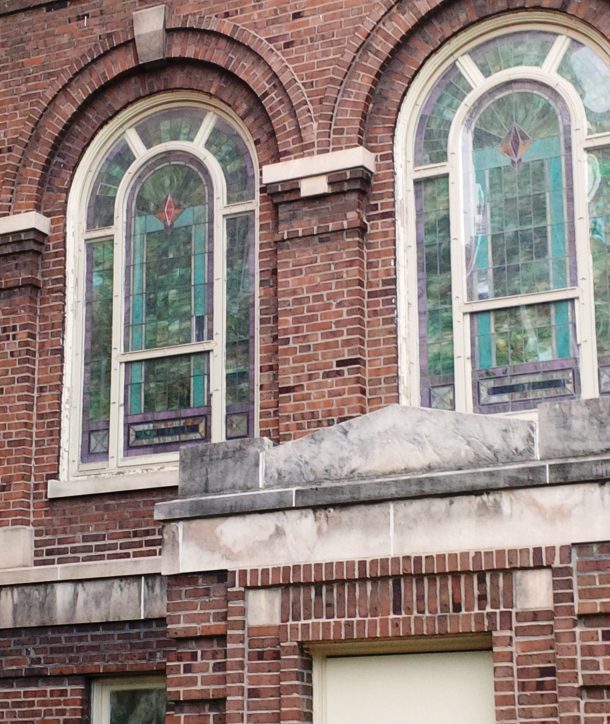 A pair of arched stained glass windows are one of the few visible reminders of the building’s original purpose.

The College of Missions was a unique institution that had been conceived and constructed through the ingenuity of female church leaders who saw the need to recruit and train women to serve as missionaries.

The push to involve women in the missionary movement began shortly after the Civil War, when it became apparent that the social mores in many African and Asian countries prohibited male missionaries from reaching indigenous women.  Prominent female members of Central Christrian Church in Indianapolis organized a letter writing campaign to call attention to the problem, and in 1874 helped found the Christian Woman’s Board of Missions under the auspices of the Disciples of Christ.  The CWBM’s headquarters were located in Indianapolis, and its first president was Maria Butler Jameson, daughter of Butler University founder Ovid Butler.

As the 100-year anniversary of the establishment of the Christian Church approached in 1909, the CWBM took on the mission of building a missionary training school as a centennial project.  A $25,000 donation was obtained from a wealthy patron in Detroit, who asked that the school be named in honor of her mother, Sarah Davis Deterding. Sponsorships for the classrooms and even the hallways were secured from other generous donors.  Although a number of suburban sites in the Indianapolis area were considered for the school, the CWBM determined that Irvington was the ideal location because it also housed Butler College.

Armed with dainty spades, the women broke ground for the project in 1907 during an elaborate cornerstone laying ceremony attended by all the Christian ministers in Indianapolis.  The building was completed three years later. 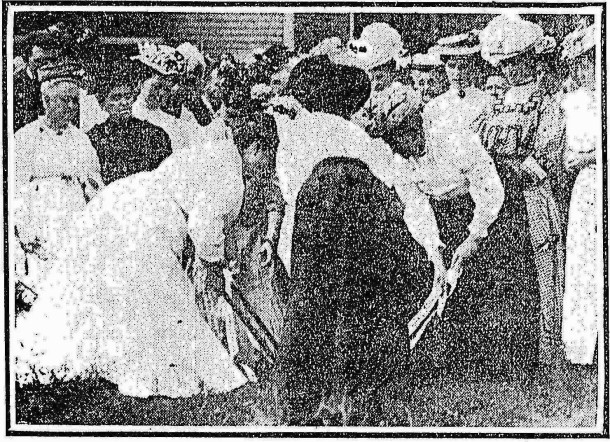 The College of Missions had a fairly short-lived run in Irvington. When Butler moved to its current location in 1928, the missionary training school relocated to Connecticut, where it could be affiliated with Yale University. The college’s board of trustees offered the building to the United Christian Missionary Society under a 99-year, rent-free lease.  When the organization balked at the generous offer, the Indianapolis Chamber of Commerce launched a successful campaign to lure the society and its 200 employees from their current headquarters in St. Louis to the empty building in Irvington.

In 1940, the Disciples of Christ saved the adjacent Bona Thompson Library from demolition when it purchased the vacant building for use as storage and office space.  The 1902 library is one of the few remaining vestiges of Butler’s Irvington campus.

The footprint of the original College of Missions continued expanding, with new additions in 1946, 1954 and 1958.  At its peak in the 1970s, more than 300 people were working in the sprawling Irvington complex. 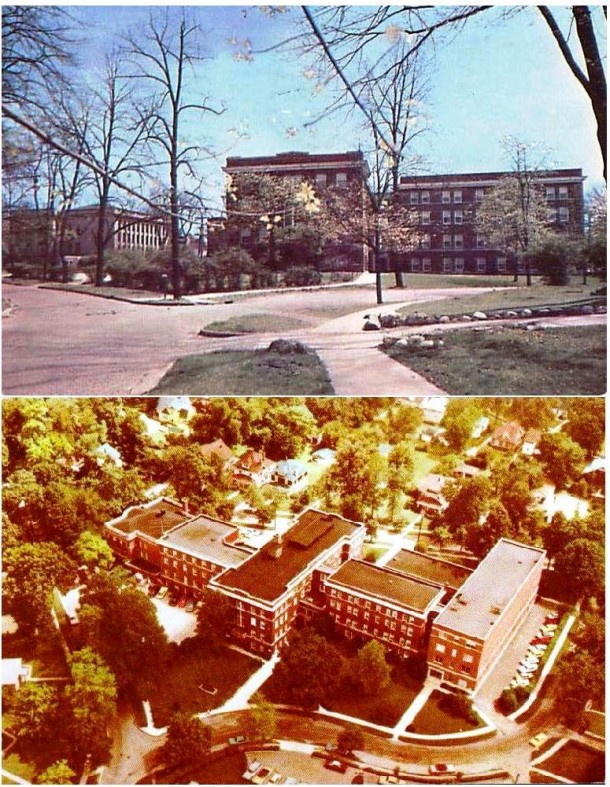 Top postcard shows the Missions Building after the 1946 addition. The aerial view shows the footprint of the complex after it was completed in 1958.

By the mid-1990s, however, the aging building was in need of expensive upgrades.  Faced with mounting repair and maintenance costs, in 1994 the Disciples of Christ voted to move its international headquarters to downtown Indianapolis.  Church leaders informed the Irvington community that unless a viable use could be found for the building, it would be demolished, along with Bona Thompson Library.

Over the next few years, there were several failed attempts to convert the vacant building into senior housing.  Meanwhile, a proposal to raze the complex and build new 10 new single-family homes was gaining traction as a back-up plan.  But in 1998, a partnership between a Black Expo development corporation and a Disciples of Christ group was successful in securing in $4.2 million in tax credits to convert the Missions Builting to low-income housing for seniors. 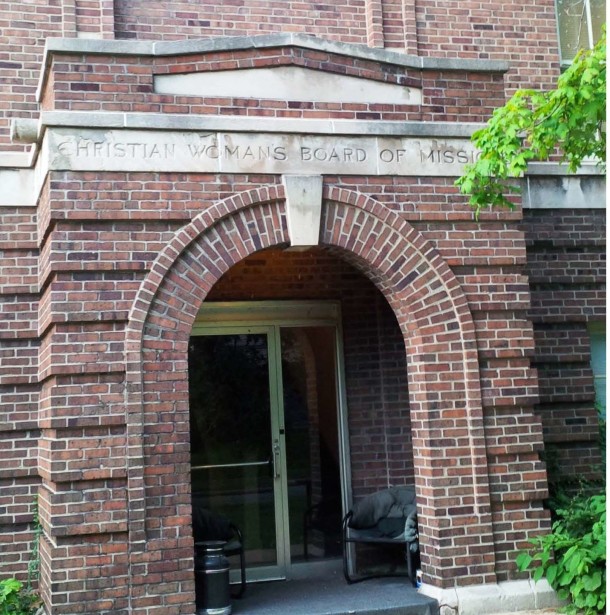 I paid a visit to the Mission Place Apartments earlier this week. On a hot August evening, the grounds that once buzzed with the voices of students and church workers were quiet and peaceful.  A smattering of residents sat in lawn chairs, smoking cigarettes and idly chatting near the brick entrance.  Overhead, the stone archway still bore the faint legend “Christian Woman’s Board of Missions.” 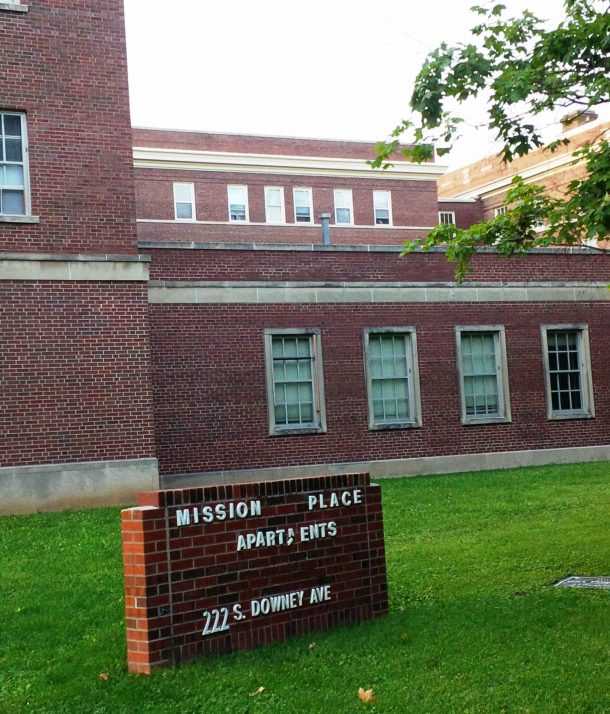