According to historian W.R. Holloway, the city of Indianapolis was 26 years old when it went through something akin to puberty. “There was a change of features, of form, a suggestion of manhood, a trace of the beard and voice of virility,” Holloway later recollected. The year was 1847 and the railroad had arrived. After more than a quarter century as a sleepy country town, Indianapolis was finally wide awake and ready to smell the coffee. 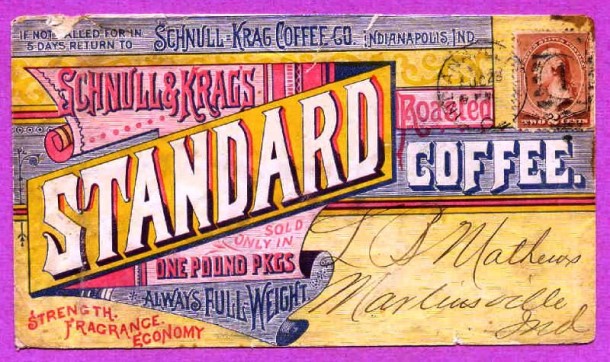 This brightly colored envelope advertising Schnull & Krag's Standard Coffee recently sold on ebay for $34. Although the postmark is illegible, the envelope dates from between 1878 and 1887, when Henry Schnull and his son, Gustave, were in business with William Krag.

Until the railroad connected Indianapolis to the rest of the state, industry floundered because there was no easy way to get finished goods to market. The central location that was supposed to make the state capital accessible to all Hoosiers actually made it an island, separated from the rest of the state by rutted trails and dense forests. In fact, the town was so isolated that in its early years — according to Holloway – its only trade could be compared to two boys locked up in a closet, swapping jackets with each other.

But then everything changed when the Madison railroad reached Indianapolis. For the first time, manufacturing plants opened and did not fail. Stores that had formerly offered hardware alongside coffee and mackerel could now limit their inventory to a single class of retail goods and still make a healthy profit. Property values increased, a city form of government was adopted, and a local school system was established. The population literally exploded, with German immigrants forming the fastest-growing group of new residents.
Over the next few decades, one of these German immigrants, Henry Schnull, would transform South Meridian Street from a quiet residential area to a thriving wholesale district. But like most wholesale changes, this transformation did not occur overnight. 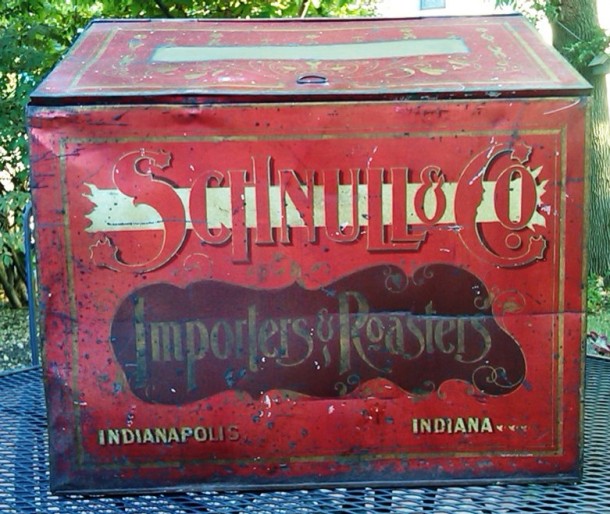 Coffee was a mainstay of the Indianapolis Wholesale District. Imported green from South America, the beans were roasted by Schnull and other wholesale grocers and packed in colorful 5-lb. tins for use by the housewife. Roasted coffee was also shipped in bags to general stores where it was sold by the pound from large bins decorated with the roaster's names. Although store bins such as the one pictured above are hard to find, many of the smaller tins have survived intact because they were repurposed as storage containers.

Henry and August Schnull arrived in Indianapolis from Germany about ten years before the Civil War. August traveled about the countryside in a wagon, buying grain, butter, eggs, chicken and salted pork for resale in the city at a profit. Henry focused on retail, working in a bakery and then later at the grocery and hardware store of Vollmer & Vonnegut. After a stint clerking at the Farmers’ Hotel, Henry opened a small grocery store on East Washington Street in 1855. August joined him a year later. Although the retail business was prosperous, the brothers shut down the store by 1858 to focus on the wholesale trade.

Now that Indianapolis was connected to ports via railroad, the Schnull brothers were able to ship surplus farm products to Madison or Jeffersonville. There, the merchandise was loaded on huge barges which were floated down the Ohio and Mississippi rivers to New Orleans. One of the brothers would accompany the shipment, sell the produce in New Orleans, and then sink the profits into coffee, rum and sorghum. These products were then shipped back north by barge and sold at a profit in Cincinnati or Indianapolis. 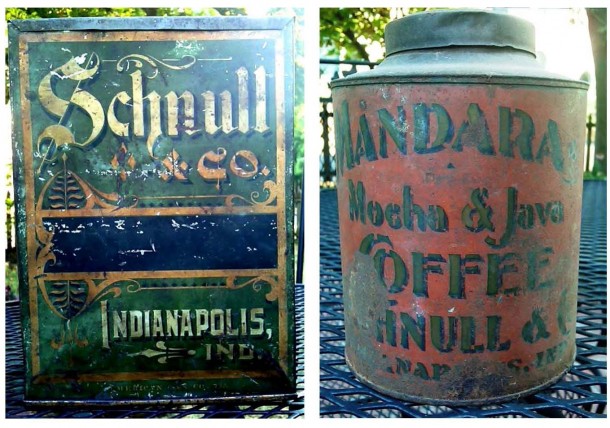 An 1887 advertisement for Schnull-Krag coffee touted the company's patented method of canning coffee, which preserved the aroma and prevented tampering by retailers. The 2-lb. tin on the right is hand-stenciled and dates from the 1870s. The 5-lb. tin on the left was manufactured by the American Can Company in the early 1900s.

There are several different stories as to how the Schnull brothers made their fortune. Under one version, they brought one of the last shipments to Indianapolis from the South just before the river was closed by the Confederates at Memphis. The price of sorghum and coffee skyrocketed, and the Schnull brothers then had sufficient capital to establish a wholesale grocery business and construct a warehouse on the southeast corner of Washington and Delaware Streets.

After the First Baptist Church burned to the ground in 1863, the Schnull brothers brought the property on the corner of Meridian and Maryland Streets and erected a four-story building to house their wholesale grocery business. The new building, known as Schnull’s Block, was located at 102-08 South Meridian. At the time, the thoroughfare was a quiet residential street lined with houses.

Schnull & Company prospered from the tremendous volume of business flowing through the state capital during the Civil War. August Schnull retired to a schloss in his native Germany, while Henry remained in Indianapolis and devoted his energies to developing a wholesale district for his adopted city.

A shrewd businessman, Henry Schnull envisioned the residential stretch between the retail merchants on Washington Street and Union Depot on South Street as an ideal location for the wholesale trade. During the 1860s, he pursued his vision with zeal, acquiring property after property on South Meridian Street and then razing the old homes to make way for commerce. Schnull erected speculative wholesale houses on some of the properties and persuaded other businessmen to do the same on the remaining lots. By the early 1870s, South Meridian had been transformed from a residential neighborhood to a bustling wholesale district.

The large store bin on the right is from the Krag-Reynolds Company, an enterprise launched by coffee roaster William Krag after he parted ways with Henry Schnull in 1887. The company went bankrupt in 1897. The Indiana Coffee Company was established in 1896 in Richmond, Indiana. Both tins are from the collection of David Yount.

The Wholesale District did suffer a serious setback in December 1895, when a disastrous fire swept through South Meridian and destroyed seven businesses. The fire was started at 8:30 in the morning when the third floor of the Schnull warehouse collapsed, striking a large stock of parlor matches stored below. All of the workers were rescued from the blaze, but two firemen perished and several others were injured. Although the total loss was estimated at $400,000, insurance covered most of the damage. Henry Schnull retained the Vonnegut & Bohn architectural firm to design a new wholesale house, and promptly rebuilt. 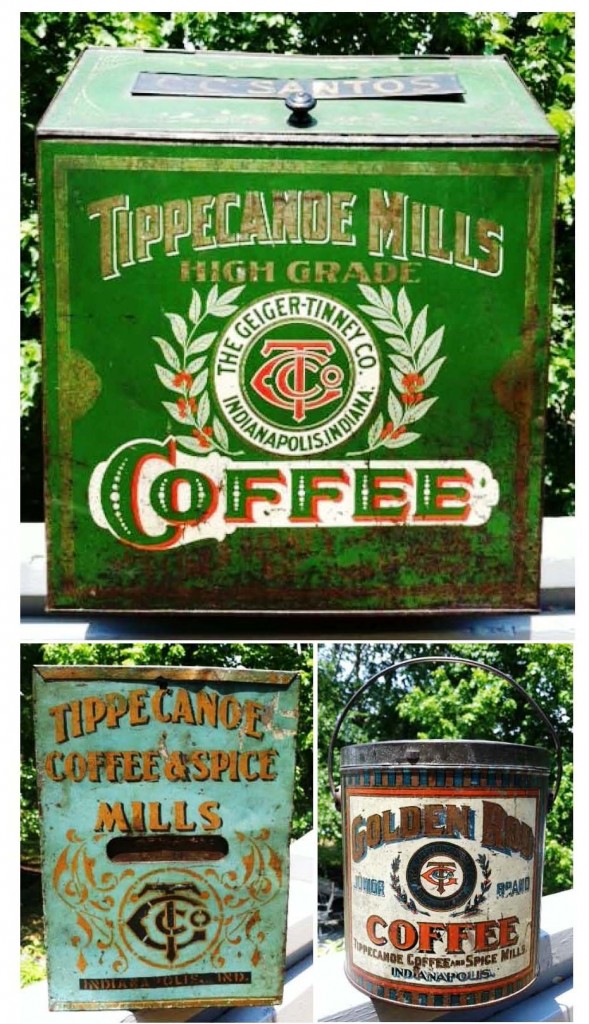 Knowing the key dates in a company's history can help identify the age of a coffee collectible. The Tippecanoe Coffee & Spice Mills were founded in Lafayette in the 1880s by Frank Geiger. He went into business with Henry Tinney in 1892, and the company's name was changed to Geiger-Tinney. The plant moved to Indianapolis in 1901. The name was changed to Geiger-Fishback in 1912, and to Fishback in 1918. The green store bin, above, dates from between 1901 and 1912, when the company operated in Indianapolis under the Geiger-Tinney name.

With the wholesale grocery thriving, Henry Schnull turned his eye to other business pursuits. In 1866, he partnered with David Macy and Volney Malott to organize the Merchants National Bank of Indianapolis. He was elected as the first president of the bank, but left after three years to return to the grocery business he founded. Over the years, he also established the Eagle Machine Works and the American Woolen Company, the first textile mill in the State.

But Henry Schnull’s real genius lay in his ability to develop key pieces of real estate. In 1872, he purchased the old Palmer House hotel on the southeast corner of Illinois and Washington Streets, built a four-story addition, and reopened it to grand fanfare in 1875 as the Occidental Hotel. Both the new hotel and its prime corner location proved to be instantly popular – so popular, in fact, that in 1876 the city council passed an ordinance prohibiting persons from standing and conversing for more than two minutes on the street corner.

By the turn of the century, the southeast corner of Washington and Illinois was believed to be the most valuable piece of real estate in the state of Indiana. Schnull had plans to redevelop the site when he became gravely ill in 1903. In early April of the following year, the Occidental was ravaged by fire. Although Schnull still owned the land and the fire-damaged property, his family took great pains to hide the loss from him. Newspapers were scoured for any reference to the fire, and visitors were cautioned to keep mum. More than 18 months passed until Schnull died of dropsy on November 4, 1905. He never knew about the blaze. 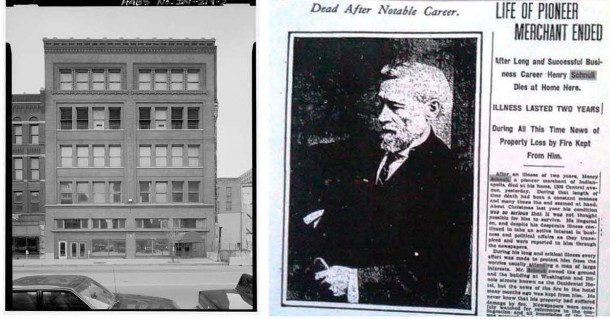 The Indianapolis Wholesale District was listed on the National Register of Historic Places in 1982. The entire area is architecturally significant because it contains the city’s largest remaining collection of 19th century and turn-of-the-century commercial buildings. One thing it doesn’t contain, however, is the building that started it all. The Schnull Block, pictured above, suffered a catastrophic collapse in 1988 and was subsequently demolished.